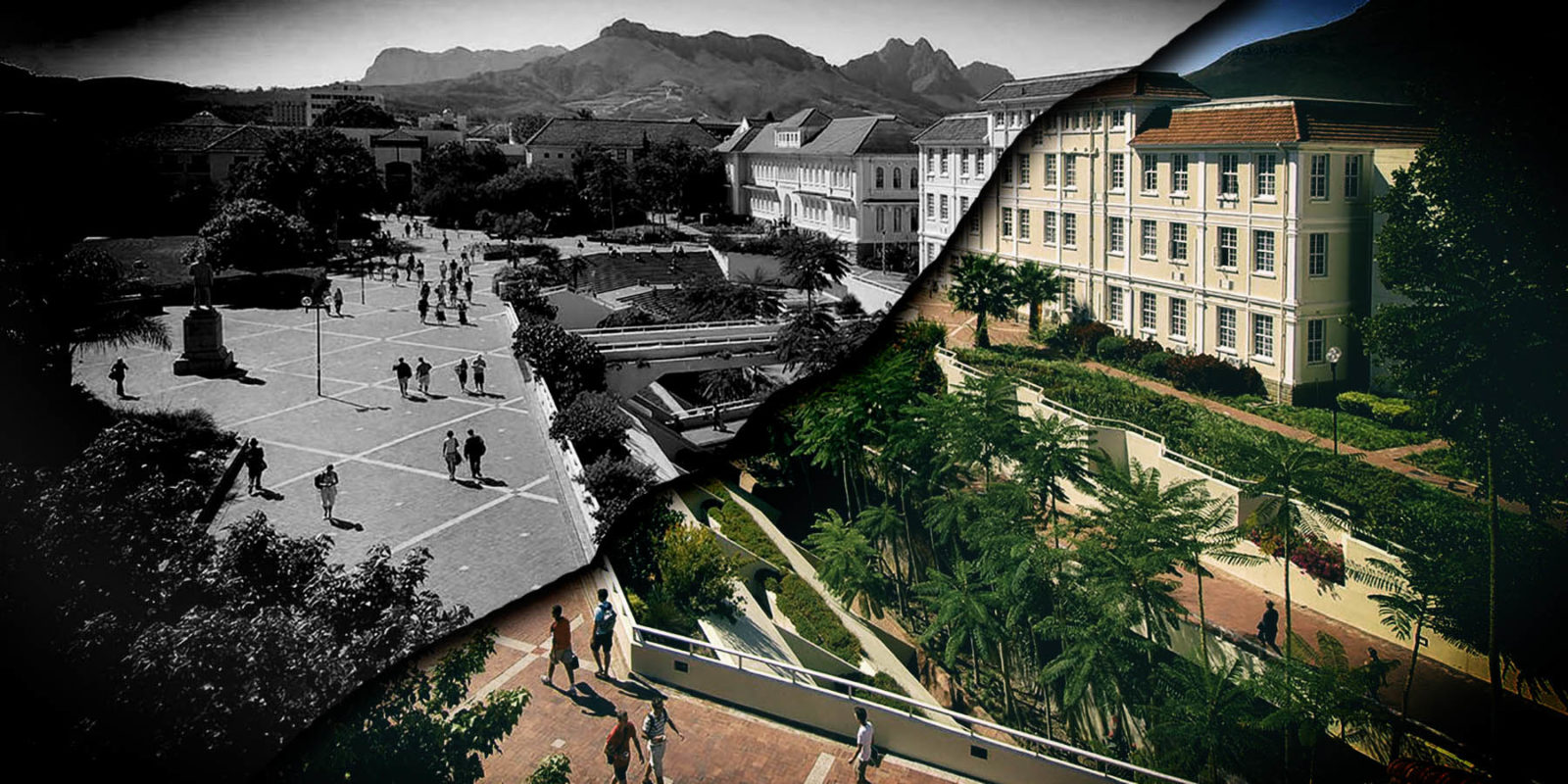 Disputes over the Stellenbosch University language policy have not abated since the resignation of three convocation members last week. This photo of the university has been altered. (Photo: http://www.sun.ac.za)

Stellenbosch University’s academic year came to a stormy end with the resignation of three members of convocation who dispute the findings of an independent investigation that cleared the vice-chancellor and rector, Wim De Villiers – who enters his second term in office in April 2020 – of any wrongdoing in the handling of a new language policy that has been upheld by the courts.

Professor Wim de Villiers is set to enter his second term as rector in 2020, exonerated of claims of conflict of interest connected to the court case over the vexed language policy issue at Stellenbosch University (SU).

However, disputes around the policy have not abated amid the resignation of three convocation members last week to protest against the findings of an independent report that cleared De Villiers of any wrongdoing.

The Constitutional Court had ruled in favour of SU’s language policy and against Gelyke Kanse, a voluntary organisation for Afrikaans rights. This led to accusations of bias after Justice Edwin Cameron, who was a judge on the case, shortly thereafter became the SU chancellor.

An investigation by retired Judge Burton Fourie, appointed by the Executive Committee of Council, found that there was no inappropriate interference by De Villiers when he approached Cameron for the chancellor nomination, yet three members of the five-member Executive Committee of the Convocation resigned in protest.

On 8 December 2019, Dr Ronel Retief, registrar of SU, sent an email to convocation members (anybody who is an alumnus of SU) informing them of the resignation of the three members, including the president of the convocation, advocate Jan Heunis – who had represented Gelyke Kanse in the court case against the SU language policy. The other two were the secretary, Bernard Pieters, and an additional member, Daleen van Zyl.

The Fourie investigation found no evidence to support a claim that a serious violation of the law or serious misconduct had taken place when De Villiers approached Cameron for his nomination while Cameron presided over the SU language policy case.

Martin Viljoen, spokesperson for SU, has acknowledged the resignations, but not commented further. When questions were posed by Daily Maverick, he sent links to previous media statements.

As has been previously reported, the 10 October ruling meant that SU would uphold its 2016 language policy where English is the main medium of instruction. The official media summary of the case states that Afrikaans would still be used “subject to demand and within the University’s resources”.

Gelyke Kanse originally approached the High Court to overturn the language policy, but its application was dismissed in 2017 because the Bill of Rights “limited to providing Afrikaans education where reasonably practicable and through reasonable educational alternatives”. It found that the previous language policy of 2014 was not equitable “as it denied black students not conversant in Afrikaans full access to the University”.

A 3 December email from George Steyn, chair of the SU council, reported that the rector had been exonerated. Steyn explained that the council accepted Fourie’s findings and that the matter was finalised. It also accepted that the report be placed in the public domain and that “no further action [is to] be taken” regarding De Villiers’ contact with Cameron.

Steyn wrote of the “ongoing narrative to discredit Prof De Villiers and Stellenbosch University” that has been taking place in “some of the Afrikaans media” and during the convocation meeting this year.

The email stated that the investigation was launched by the Executive Committee of Council on 31 October, following a complaint by Dr Leon Schreiber, an alumnus and DA MP, on 24 October.

Schreiber had requested in his complaint to Retief that an independent investigation take place into the allegations against De Villiers, which he claimed were “in the public domain” that included “irregular, unethical and potentially illegal ways of interfering with the court case between the SU and Gelyke Kanse”.

Schreiber confirmed to Daily Maverick that he laid the complaint in his capacity as an alumnus and former member of the Institutional Forum. He said the DA supports having English and Afrikaans as “fully equal and primary languages of teaching” at SU, as well as the expansion of other indigenous languages in education.

“The current language policy has practically eliminated Afrikaans teaching at SU,” said Schreiber, claiming that the decision “will disadvantage millions of Afrikaans speakers, who constitute majorities in the Western Cape and Northern Cape”.

Schreiber said that in resigning, he has “great admiration for Heunis and his colleagues’ commitment to principle”.

“I had earlier also resigned from the SU’s Institutional Forum because I cannot be complicit in the implementation of a language policy that excludes people on the basis of language, when real multilingual teaching is plainly feasible at SU,” said Schreiber.

In his letter of complaint to the registrar, which led to the investigation, Schreiber asked for answers to a number of questions, including:

The investigation found that Cameron initially declined the nomination for chancellorship from De Villiers due to his involvement in the SU language policy case.

He was later approached again, by advocate Jean Meiring this time, and Meiring said it seemed to him that Cameron thought that “at present, a white male should not be appointed as the chancellor of the University”.

By mid-August, Cameron had begun reconsidering the nomination, but with the condition that SU first get an indication of Heunis’s attitude on the matter. De Villiers claimed that he called Heunis to get his agreement for Cameron’s nomination. Heunis remembered it differently, claiming that De Villiers had merely asked his opinion on Cameron.

When asked about the matter by Daily Maverick, Cameron referred to the letter he had received from Heunis regarding his nomination. In the 29 August letter, Heunis said that he and other alumni who have links with Gelyke Kanse had also thought to nominate Cameron, but had refrained from doing so because of Cameron’s involvement in their case.

Heunis added, “Be that as it may, this serves to inform you that there will be no objection from the parties which I represent in that case to your acceptance of a nomination as a candidate for the position of Chancellor of Stellenbosch University.”

The Fourie report stated that the registrar of the Constitutional Court reported that Cameron had declined the chancellorship because the SU’s case was still in litigation and only reconsidered it after the case had concluded.

Schreiber claimed that although the Fourie report exonerated De Villiers, it made more evidence available on record. Of particular interest was a “secret meeting” that took place between De Villiers and Cameron less than a month before Cameron’s ruling.

On 2 December, De Villiers released a statement where he said of the investigation’s conclusion, “I have been completely exonerated.” He maintained that it was his responsibility as the rector to help find suitable candidates.

“I hope we can now close the book on this matter and move on as a university community,” said De Villiers, adding that both the High Court and the Constitutional Court had confirmed that the university’s language policy was constitutionally justified and that an independent investigation had found no transgressions.

“We remain committed to using English and Afrikaans as languages of tuition to promote inclusivity and multilingualism.”

Cameron said to Daily Maverick of the investigation, report and reactions to it, “I have no commentary seeing as the university launched Judge Fourie’s investigation.”

In his letter of resignation, Heunis said Steyn’s “attack on the Afrikaans media emphasises the SU’s indifference towards informed debate and transparent processes”. He said the Fourie report was a “rescue attempt” and “unjustifiable”.

As a result of this “dishonour” brought on SU, he could no longer associate with the university.