The rise of the machines looks nothing like the movies 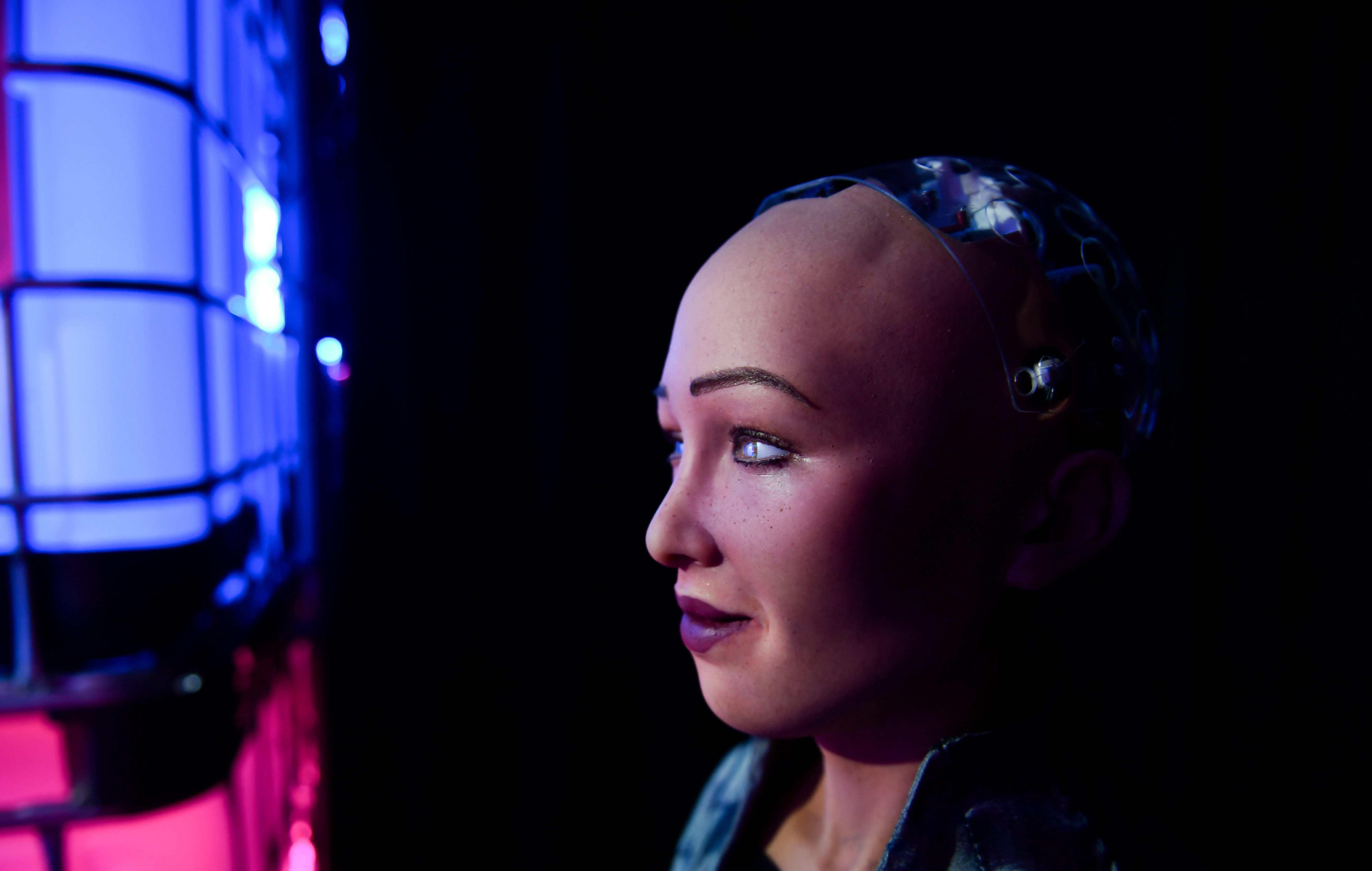 LISBON, PORTUGAL - NOVEMBER 07: Sophia The Robot of Hanson Robotics on Centre Stage during the second day of Web Summit 2018, the global technology conference hosted annually on November 7, 2018 in Lisbon, Portugal. In 2018, more than 70,000 attendees from over 170 countries will fly to Lisbon for Web Summit, including over 1,500 startups, 1,200 speakers and 2,600 international journalists. (Photo by David Fitzgerald /Web Summit via Getty Images)

The current wave of fear of intelligent (and possibly sinister) machines is nothing new, nor is there concrete evidence beyond hypotheses that machines will take over. However, if the fear is indeed justified, humanity should consider that perhaps thus far, we have been fearing the wrong kind of machines.

The question of whether or not artificial intelligence is a good thing for humanity in the long term is an increasingly popular one in the 21st century. A quick search reveals numerous think pieces, and Elon Musk quotes. Even here, at Maverick Life, we have pondered related questions, from the theoretical concept of the impending singularity – which depending on your point of view might be something to embrace or avoid, to wondering about already existing physical unions with machines, via microchip implants.

Perhaps the biggest influence when it comes how we view and visualise machines imbued with artificial intelligence is film. Thanks to cinema and television, we have more than a century of visual references, stretching all the way back to the rather benign mechanical contraption in the 1908 film, An Animated Doll. Back then, it was referred to as an automaton, a word that had gained popularity alongside ‘android’ in 19th century literature. The word ‘robot’ came later; it was coined by Czech playwright Karel Capek in his play, ‘Rossum’s Universal Robots’ (R.U.R.), first performed in Prague in 1921, and it was derived from the Czech word ‘robota’, which means ‘drudgery’, though it can be used generally to simply mean ‘work’.

Cinema was certainly not the first introduction of the idea of robots and artificial intelligence into the popular imagination, that honour goes to 19th century literature, in the thick of the industrial revolution as novels featuring increasingly intelligent machines started gaining popularity. Then, progressively over the 20th century, in the West, societal fears were projected onto these fictional machines borne out of the human imagination. Although not quite as well received at the time, the 1927 silent movie, Metropolis, which went on to be considered a masterpiece of early sci-fi, presented audiences with a robot made in the image of one the movie’s characters, Maria. Made and manipulated by man, robot Maria deceived and caused havoc, and in the end was destroyed. Then there are the ‘killer robot’ flicks of the 40s and 50s, with titles such as Doctor Satan’s Robot, The Mechanical Monsters, Robot Monster, to name just a few. Ominous much?

The 60s, 70s and 80s threw a few sympathetic examples of robotic artificial intelligence into the mix. From sitcoms like My Living Doll and Small Wonder, through to popular favourites like Star Wars’ C-3PO and R2-D2, and cinema classics like Blade Runner.

Perhaps because of our elevated view of ourselves and our role on this planet, both malevolent and benevolent robots of the popular imagination tend to take on human form. Even the Wachowski’s 1999 hit, the Matrix, fell back on this trope, where the machines’ programs, the Sentinel, the Oracle, took on human form. Indeed, bright minds of the 20th and 21st century have created many ‘real-life’ examples, be it kid’s toys, helpers, sex companion dolls, or Hanson Robotics’ celebritised ‘Sophia the social robot’. Since ‘her’ activation in February 2016, she has done the interview circuit including Jimmy Fallon and the Today show.

In July of 2019 she visited South Africa, got dressed by designer Fred Eboka, met up with pupils from several Gauteng schools, popped into Carte Blanche for an interview. She was also invited to address the United Nations.

Sophia’s human likeness, her uncanny facial expression, her anthropomorphic gestures, are much closer to the robots of the screen. However, in reality, the overwhelming amount of artificially intelligent machines that have become an integral part of human life, like the one you’re staring at right now, look nothing like us. Even the highly efficient everyday robots, like those in the oft-cited highly mechanised and automated Amazon warehouses, simply look like machines of various shapes.

The Android millions of humans interact with daily is not the capricious variety of books and movies, it’s the Google-owned operating system that as of September 2019, runs on 76% of the world’s smartphones, represented by a seemingly benign green icon resembling Star Wars’ lovable R2-D2 droid. Other examples of artificial intelligence that we interact with daily on said smartphones don’t necessarily take the physical form either, they’re simple apps we download and delete at will, often feeding them our personal information.

They are the ones that know us best, that study our behaviours, our homes, our driving patterns, our musical preferences, and through ever-progressing machine learning, are able to anticipate our needs, make suggestions, and occasionally make decisions for us.

Even as autonomous driving is in its infancy, Waymo, an American self-driving technology development company that began as a Google project in 2009 before becoming a stand-alone subsidiary in December 2016, began rolling out their completely driverless ride-hailing service to a few hundred riders Phoenix, Arizona, US, as of October 2019.

As far off as a fully autonomous driving future maybe for most of the world, regular cars on the streets already feature elements of these technologies: lane-keeping assistance is becoming a standard feature on high-end vehicle, where the steering wheel stiffens when it senses the driver leaving their lane without indicating, and should there be no resistance, the steering wheel turns autonomously to keep the driver on their lane. Similarly, collision assist software, already available in many high-end cars, is capable of slamming the brakes before a driver crashes into the car in front; many vehicles also feature adaptive cruise control, which slows or speeds up the car based on the speed of the car in front. And, of course, there’s self-parking.

These examples are just a tip of the iceberg as it were. Artificial intelligence spans several industries including healthcare, retail, advertising, media, transportation, manufacturing, agriculture, financial services, education and more. According to several market research companies, it is projected to grow to well over $100 billion globally by 2025. Allied Market Research puts the number at $169 billion, Markets and Markets at a $190 billion. Most recently, in August 2019, Forbes Business Insights estimated it to be $202 billion by 2026.

Whether or not machines programmed with artificial intelligence software will reach a level of intelligence and motivation to fully contemplate a takeover of the planet from humans is a matter of hypothesis at the moment, with strong opinions on both sides. What is undeniable is that machines, and later, artificial intelligence, have long taken over and improved on many manual, mathematical, medical and logical tasks from humans, becoming an extension of humans, allowing our species to perform previously unthinkable functions, even extend life. And unlike Sophia, most do not resemble us, they do not walk on two feet, they do not have pre-programmed facial expressions and human gestures for us to study, for us to suspect, to imbue with sinister motives, real or imagined. ML