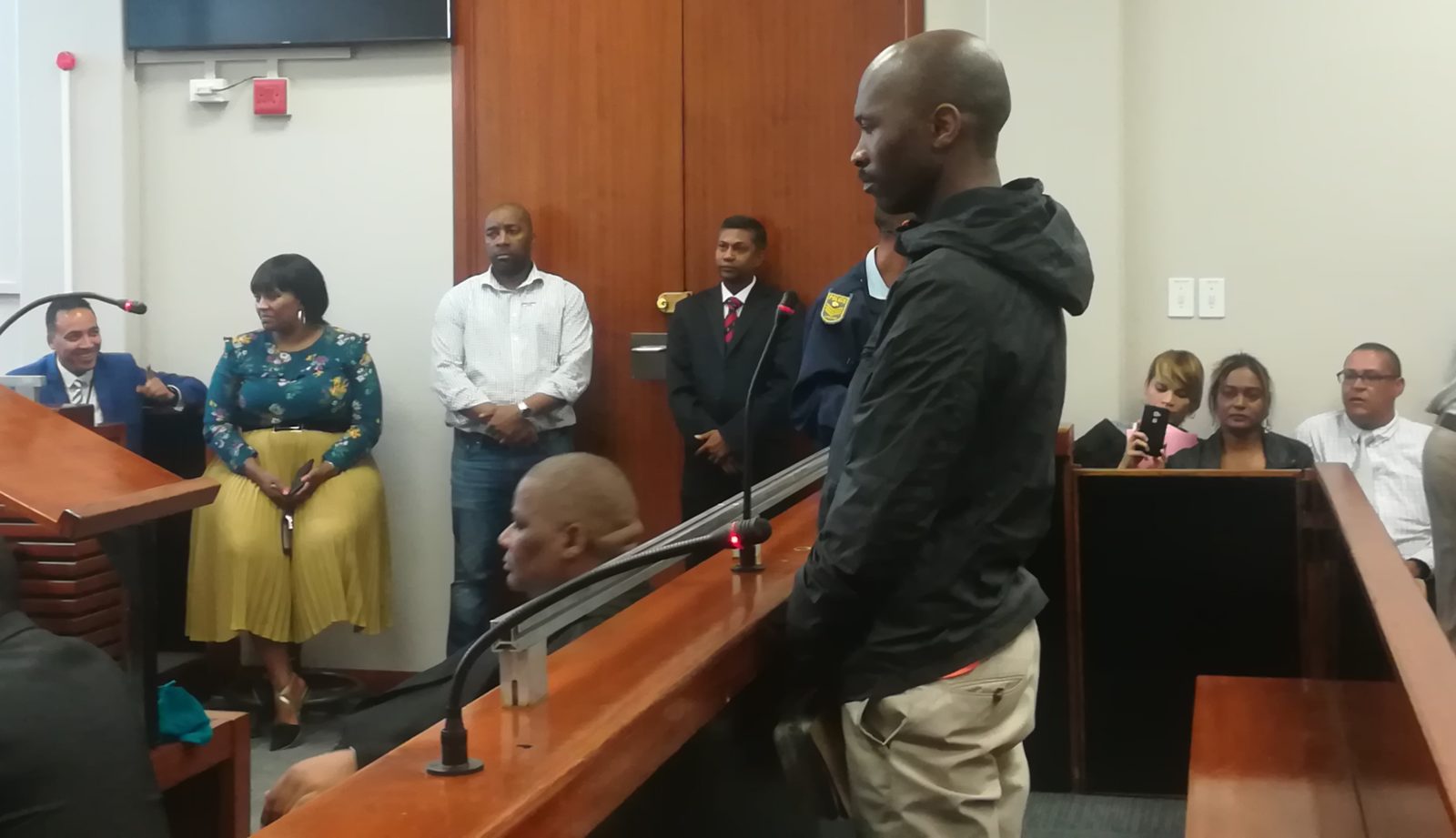 Over two months after Uyinene Mrwetyana was raped and murdered at Clareinch post office in Claremont, the identity of the man accused of killing her has been revealed. Luyanda Botha appeared briefly in Wynberg Magistrates Court on Tuesday. His murder and rape trial has now been transferred to the Cape Town High Court.

Luyanda Botha entered the courtroom with his face turned to the floor, a large hood covering his head to conceal his identity. But Magistrate Goolam Bawa had already lifted the order barring the media from revealing the accused’s name and identity, and, after hiding for two minutes as the crowd shouted “show your face!” Botha had to remove his hood for the court to proceed.

Botha stands accused of the murder of Uyinene Mrwetyana, the 19-year-old University of Cape Town student who went missing on 24 August this year. Botha is also accused of two counts of rape and defeating the ends of justice.

Western Cape Director of Public Prosecutions Rodney de Kock, who will represent the state in the case, said the second count of rape will be explained when the accused is charged in the Cape Town High Court.

Botha will remain behind bars until Thursday, where he will be officially indicted. The case will then be transferred to the High Court, where Botha will appear on Friday, 15 November. The two-day postponement was granted so that the defence can take instructions from Botha as to what he will want to do when charges are put to him in High Court.

As Bawa explained to the court that the investigation into Mrwetyana’s rape and murder has already been completed, Botha remained passive, his face expressionless.

The 42-year-old employee of the Clareinch post office has, once again, opted not to apply for bail, after he originally confessed to the crimes in early September. From the public gallery the news was met with rumbles of discontent, as some members of the crowd hoped he would be granted bail so they could “deal with him”.

Mrwetyana had originally gone to the post office to check whether a parcel she was expecting had arrived. The accused told her to come back later, claiming he could not access the post office’s system. When Mrwetyana returned later, after hours, the accused attacked her.

Mrwetyana’s remains were discovered in Lingelethu West, Khayelitsha, days after she went missing. At her funeral in September, Police Minister Bheki Cele told mourners that Mrwetyana fought back while she was raped, and was subsequently bludgeoned to death. Cele also explained the accused’s thought process after he killed her.

“He realises what he has done, he buys some liquor and drinks it because he doesn’t know what to do. He wraps the young, beautiful body in his boot and goes and buys things to burn the body. Takes the body out, burns the body and digs a shallow grave and puts this beautiful [child’s] whole future in the grave,” he said.

According to Deputy DPP Advocate Bonnie Currie-Gamwo, the Mrwetyana family did not attend court on Tuesday, but will be present for the proceedings in the High Court.

At her daughter’s funeral, Nomangwane Mrwetyana asked for forgiveness, saying: “I am sorry that I warned you about all other places, but not the Post Office. I am sorry I was not there to protect you and fight for you, my girl.”

Currie-Gamwo indicated that the family was satisfied with the way the case has taken place.

Outside the court, a small handful of protesters showed their support with banners saying “There is no excuse for violence against women”.

“The longer they prolong cases the more the levels of urgency subside,” said Siya Manakali from Ilitha Labantu, an organisation that advocates against gender-based violence. He was one of about a dozen people protesting outside the court before and after the case took place.

According to De Kock, the prosecution’s “main objective is to ensure justice is done. At the end of the day, justice must be done in these matters”. DM