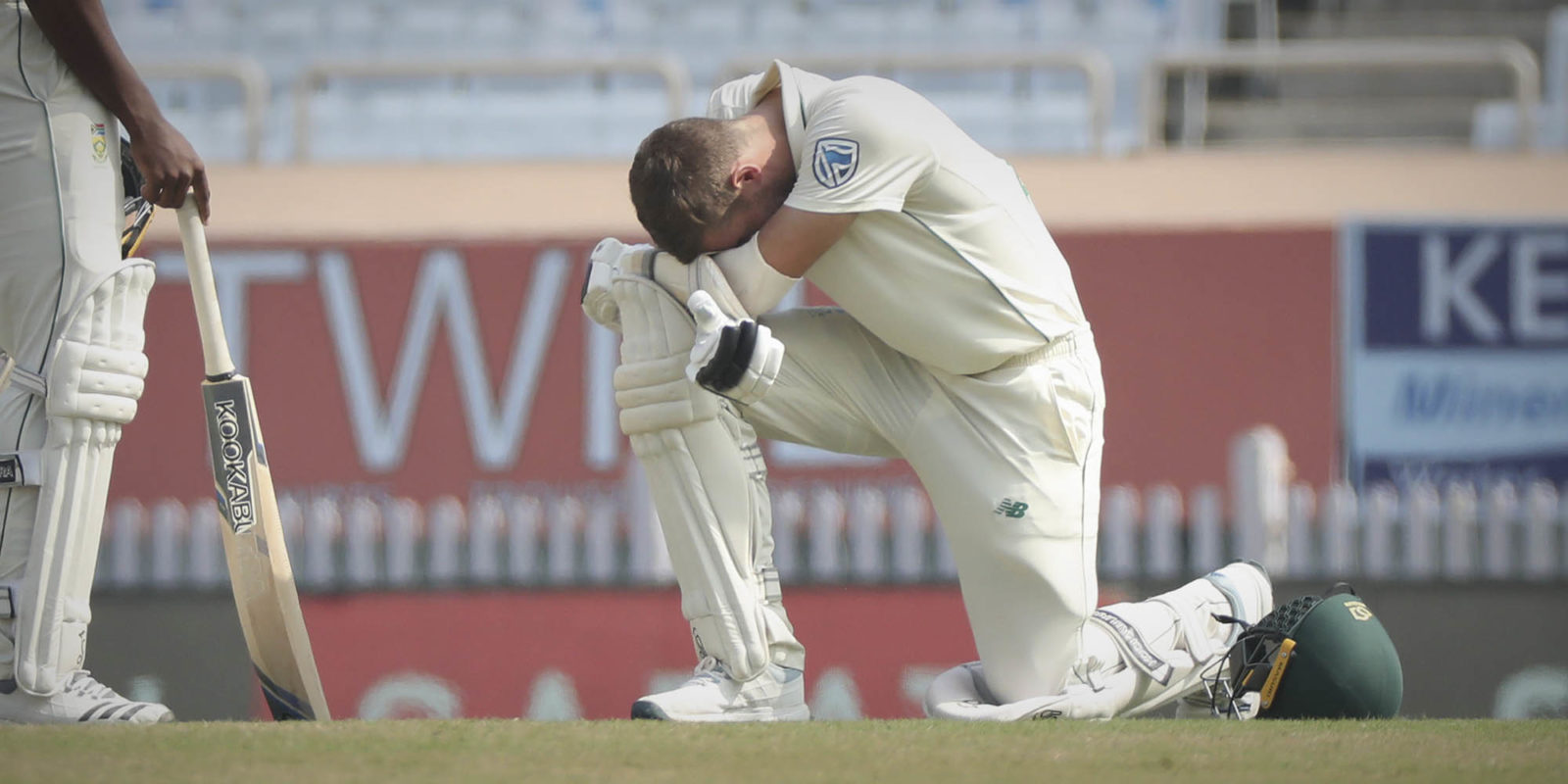 Anrich Nortje was dismissed after he struck Nortjie on the wrist and ball was caught by Shahbaz Nadeem during Day Four of the Third Test of the 2019 International Series between India and South Africa at the JSCA International Cricket Stadium in Ranchi, India on 22 October 2019 (Photo: Gavin Barker/BackpagePix)

South Africa set a whole host of unwanted records with their series pummelling at the hands of India. Now they have to dust themselves off and look at how to redeem themselves.

South Africa started the third match in the Freedom Trophy against India looking to save face and pick up a consolation win. Along with their pride, they also had 40 Test Championship points to play for.

And after yet another heavy defeat, this time by an innings and 202 runs, they go home with nothing, bar harsh lessons to show for their troubles.

Speaking after his team had been bowled out for 133 in their second innings, elder statesman of the team and skipper Faf du Plessis admitted: “It’s been a really tough series for us but we need to ensure that when we tour again, we are better equipped. This is the toughest place to tour, the statistics say that.

“This is a really tough Indian team under Virat [Kohli]. Be it in the batting, bowling or even fielding, we were dominated across the series,” Du Plessis said at the post-match presentation.

Indeed, India is an extremely tough environment for touring nations. And it has become a fortress for the number-one ranked Test team. With this latest victory they have won 11 successive Test series at home, a run that stretches back to late 2012.

So, maybe with that in mind, and the fact that South Africa have lost some vital cogs over the years in the likes of AB de Villiers, Morne Morkel, and most recently, Hashim Amla and Dale Steyn, it was always going to be an uphill battle in India.

Moreover, it is also very much a transition period off the pitch after the new structure announced by Cricket South Africa after the World Cup disaster.

However, even with all those factors considered, this performance was simply atrocious. Not once were they able to bowl the Indians out, whereas they were bowled out in each of their innings across the three matches. India took 60 wickets to South Africa’s 25.

Just for context, Indian seamers Mohammad Shami and Umesh Yadav got 24 wickets between themselves in the series.

This was also the first time since readmission that the Proteas have lost consecutive Tests by an innings. The last time such a fate befell them was in 1935-36 against Australia.

This 3-0 was South Africa’s fifth Test defeat in a row. They were also stunned by Sri Lanka on home soil back in February, losing 2-0 in a Test series that they were expected to win at a canter.

So, what happens now? Well, South Africa are scheduled to play a four-Test series against England at home beginning on December 26.

The question is which side the Proteas will pick for that battle. Because, whereas in the past the starting 11 would generally pick itself, this time around it seems that the starting 11 is unclear. None of the new faces from the India tour unequivocally put up their hands for definite inclusion in future.

Over and above that, there seems to be no sense of continuity on the management side. Enoch Nkwe is the interim team director, Corrie van Zyl is the acting director of cricket and there is a temporary backroom coaching staff.

There has to be more clarity and a clear vision for the future. Or else South Africa is in line for a few more embarrassing defeats like the one suffered on the subcontinent. DM