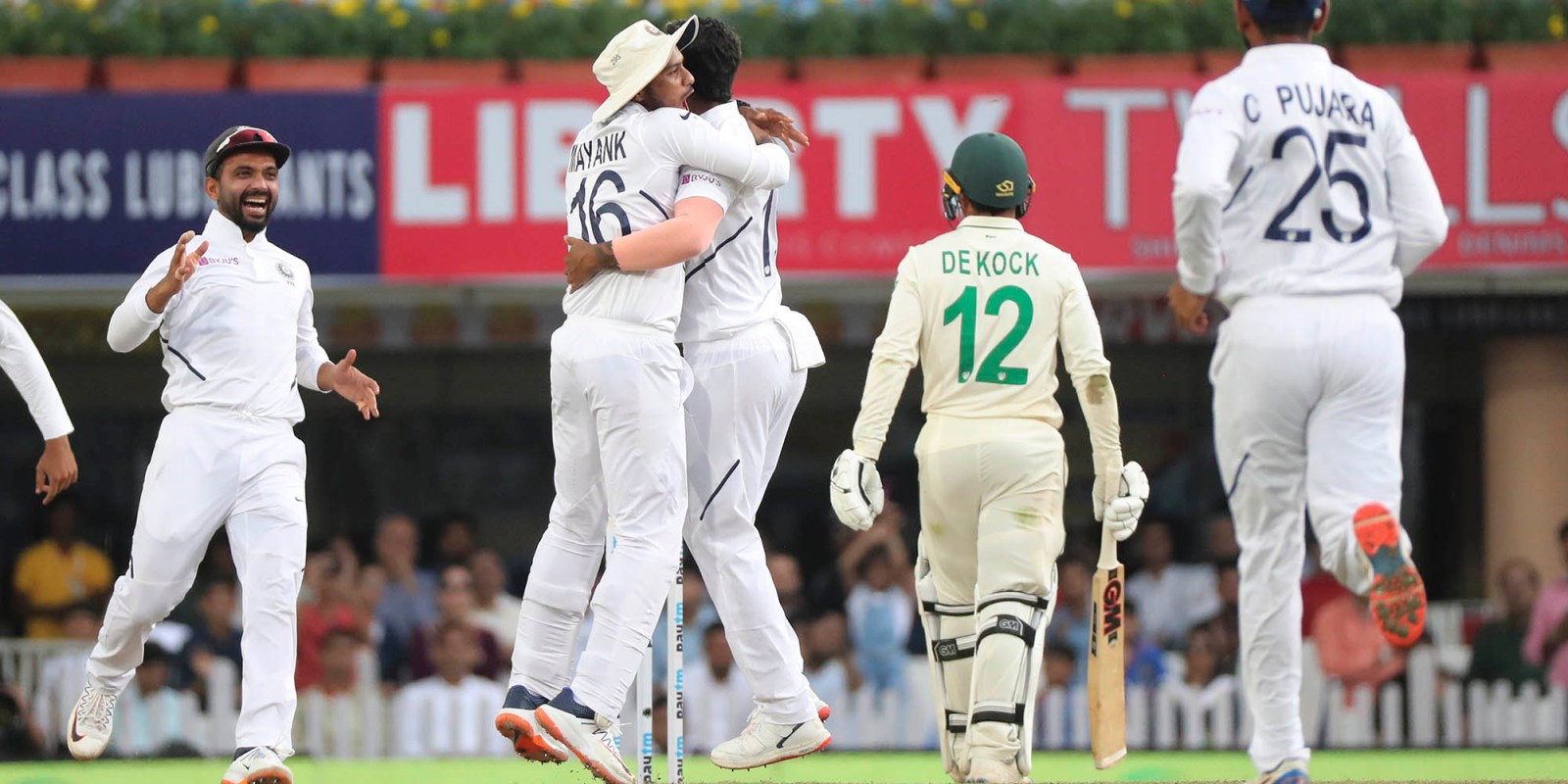 Umesh Yadav of India, centre, is congratulated by teammate Mayank Agarwal as they celebrate taking the wicket of Quinton de Kock of South Africa during day two of the third Test at the JSCA International Cricket Stadium in Ranchi on 20 October 2019 (Photo: Gavin Barker / BackpagePix)

After two half-days due to bad weather in the third and final Test between South Africa and India, the Proteas are once again on the ropes. This is despite some decent bowling from debutant George Linde.

India won the toss and elected to bat.

Having been bludgeoned by India in the first two Tests, the South Africans were looking to end their tour of the sub-continent on a high.

Speaking a day before the third Test, Proteas captain Faf du Plessis said most of this week had been spent trying to keep his charges motivated.

“For me it’s important that the guys don’t feel like there’s one week left in India and almost already get on that plane to South Africa. The Test series that we play now are for the Test Championship; there are points still up for grabs in every Test match,” said du Plessis.

Over and above the points, the Proteas were looking to pick up 20 wickets for the first time in the series.

Du Plessis mixed things up by bringing along a proxy, in Temba Bavuma, to make the call during the toss. However, Bavuma was not to be the lucky charm Du Plessis had hoped for. And for the third time in the series, South Africa lost the toss.

As the first session began, it seemed that Du Plessis’s motivation during the week had been transmitted loud and clear.

Kagiso Rabada took the new ball, partnered by Lungi Ngidi – who was making his first start in India after shaking off an injury.

Rabada picked up a blitzkrieg two wickets for 11 runs. First, after having asked questions of him already, he finally got Mayank Agarwal to edge one into the waiting hands of Dean Elgar at third slip.

Rabada struck again shortly after, this time trapping Cheteshwar Pujara leg before. Anrich Nortje joined the party – delivering fast and straight to claim his first Test wicket, the massive scalp of Virat Kohli, trapping him leg before for just 12 runs.

And so it was that India found themselves rattled and reeling at 39 for three, with the Proteas conceding just 71 runs in 23 overs in that first session.

South Africa would have thought that by getting rid of Kohli they had exorcised the ghosts of matches past. But Rohit Sharma reminded them that he was one half of that ghost.

While wickets tumbled around him in the early morning, Sharma bided his time, waiting for the perfect opportunity to haunt South Africa once more. When he found a willing accomplice in Ajinkya Rahane, the Proteas were once again plunged into a nightmare.

Having weathered the consistency and pace of Rabada, Ngidi and Nortje under cloudy skies, he picked his moment and decided to attack offspinner Dane Piedt.

He scored 29 runs off the 21 balls he faced from Piedt.

To demonstrate the rate at which Sharma smelt blood and attacked – his 50 came from 86 balls, but after that it took him just 31 balls to score 29 runs.

South Africa went on to concede 134 runs in the second session, almost double the runs they conceded in the first session.

After being caught muttering “not now, not now” from the non-strikers’ end, this in response to the light drizzle that had just started, Sharma brought up yet another century in this Test series, his third. He brought it up in style, smacking Piedt for six over long-off.

It was Sharma’s 16th six in the series, breaking the world record for most sixes in a Test series. The record was previously held by West Indies batsman Shimron Hetmyer, who scored 15 against Bangladesh at the tail-end of last year.

Two overs later, Rahane was also smacking a perplexed Piedt for six, bringing up the fourth wicket partnership to 150 runs.

Only six more overs were bowled in the third session before play was suspended and then eventually stumps were called due to bad light and a slight drizzle. Advantage India.

The second day ended just as the first one had. Firstly, bad light and a slight drizzle forced the umpires to call stumps. Secondly, India were in control.

The game had resumed 30 minutes early on day two, India sitting comfortably on 224 for three, with Sharma unbeaten on 117 and Rahane just 17 runs short of his century.

The pair picked up where they left off on day one, picking apart the Proteas attack. Rahane eventually reached his century just before lunch. It was his first on home soil in three years.

Just before lunch, debutant George Linde got the breakthrough South Africa so desperately needed. He got Rahane to feather one to Heinrich Klaasen, who was keeping in place of Quinton de Kock.

A first Test wicket for Linde, and a first international dismissal for Klaasen. And the slightest glimmer of hope for South Africa.

There was still that matter of Sharma, however. He had continued plundering Piedt all over the pitch, to reach 199 not out at lunch.

Post lunch, Sharma got settled, then proceeded to smack Ngidi for six. Undoubtedly a sickening sight for South African bowlers at this point.

The Sharma show eventually came to an end, Rabada once again the hero for the Proteas. A pacy bouncer caught the Indian batsman off-guard and nicked off the top of his bat to find Ngidi positioned at fine-leg.

The dismissal was Rabada’s 250th in first-class cricket.

Having put an end to the Sharma onslaught, the Proteas now set their sights on trying to bowl out India for the first time in this series.

Linde contributed admirably to that cause, claiming the scalps of Wriddhiman Saha and Ravindra Jadeja as the clouds once again gathered in Ranchi.

Then Piedt came to the party, dismissing Ravichandran Ashwin. Linde got his fourth of the day, combining with Klaasen again to dismiss Umesh Yadav, leaving India on 482 for nine. One more wicket to get that first 10 wickets of the series.

But Kohli wasn’t going t0 give South Africa that sort of psychological boost. The Indian captain declared with the score 497 for nine.

Over to you, wilting Proteas.

With such a massive target, South Africa had to keep their composure and try to bat as long as possible.

However, yet again they were plunged into a nightmare. Two quickfire wickets left them shell-shocked at eight for two after just two overs. Openers Dean Elgar and Quinton de Kock were the victims.

A massive case of “when it rains it pours.” Just then, the weather once again had an impact on play. For the second consecutive day, the umpires called stumps, with South Africa teetering on the ropes for the umpteenth time in the series.