Nomgcobo Jiba: Out of work, out of money – and almost out of runway 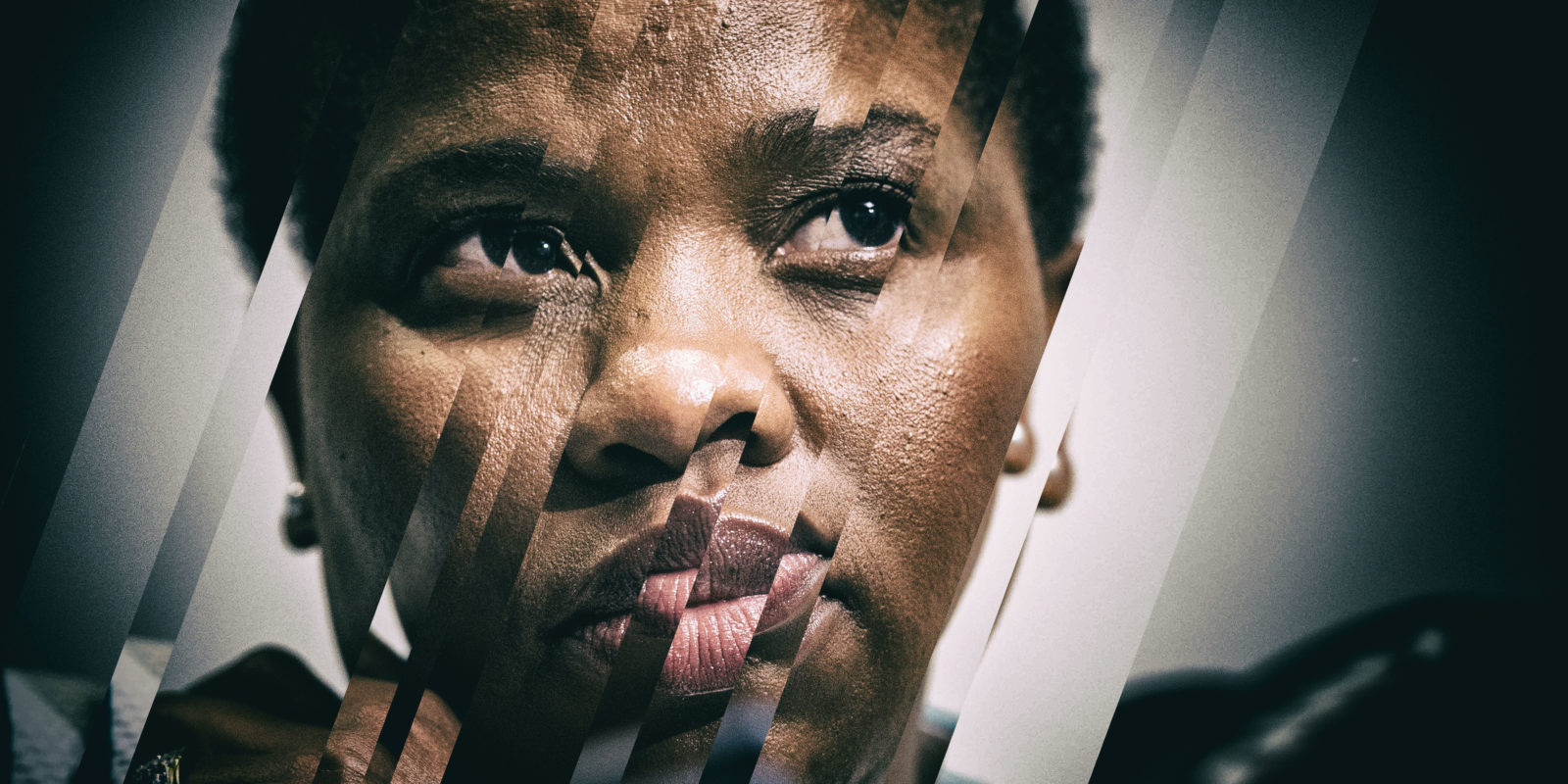 A decade later the chickens have come home to roost, as they always do.

On Friday 18 October 2019 Judge Robert Henney in the Western Cape High Court dismissed Part A of Jiba’s bid to be reinstated as Deputy National Director of Public Prosecutions after being fired by President Cyril Ramaphosa in April 2019.

Apart from firing Jiba, Ramaphosa also “banned” her from “assuming any position in the Public Service” in response to the damning findings of the Mokgoro Commission of Inquiry into Jiba and former head of the Specialised Commercial Crimes Unit, Lawrence Mrwebi. Both were found unfit to hold office.

Henney ruled that Jiba’s argument that she could not be removed from office before Parliament had made a decision about her fate was a flawed interpretation of section 12 (6) of the NPA Act.

Jiba had argued that the president needed to await the outcome of the parliamentary process before firing her and that his decision to do so had been “premature and unlawful”.

“It is clear from the wording and the manner in which the entire section has been constructed, that it envisages two distinct and separate procedures when an NDPP or DNDPP is removed from office. The wording in my view, is clear,” said Henney in his judgment.

He said the function to suspend or remove “clearly resides with the president and no one else”.

“The president is charged with the exclusive power to suspend or remove the NDPP or DNDPP.”

Henney said the act did not give Parliament these powers and did not state that removal was conditional upon the approval of Parliament.

Henney asked if the intention of the act had been only to have the removal take effect after Parliament had considered or confirmed it, and Parliament had to be involved in the decision to remove an NDPP or DNDPP, why the act required that the removal, the reasons for it and representations (if any) by the NDPP or DNDPP be communicated within 14 days after such a removal.

“What purpose would it then serve to communicate such removal to Parliament, if the president does not have the exclusive power to remove the incumbent?”

It was only after the removal that parliament played a role.

“The president’s function to remove is then completed and he plays no further role.” Should Parliament opt to “restore” Jiba to her post, the president would be obliged to do so, said Henney.

And so it is that the fate of one of former president Jacob Zuma’s staunchest and most zealous defenders is now up to Parliament’s madly busy Justice and Correctional Services portfolio committee. Will they do the right thing?

In August 2019, parliamentary legal adviser Siviwe Njikela informed MPs that discussions with the Office of the Speaker had taken place on how to approach Jiba’s High Court challenge of her dismissal while considerations were taking place.

The legal quandary arose as Parliament is bound by a statutory requirement that it needs to consider Jiba’s sacking “within 30 days or the soonest afterwards”.

An out-of-court agreement was reached pending Part A of Jiba’s application to the Western Cape High Court which is what Henney ruled on Friday 18 October 2019.

In late July 2019, the justice committee had opted to proceed with considerations after the three-week parliamentary recess. While MPs decided against personal representation by Jiba and Mrwebi to the committee, it gave both 10 working days to make written representations.

Mrwebi did so at first, but Jiba declined. Mrwebi later withdrew his representation, saying that deliberations on his sacking should be stalled pending the outcome of Jiba’s interdict and review application.

In Part B of her application, Jiba seeks to challenge the constitutionality of section 12 (6) of the NPA Act, claiming the president had violated the Constitution and had acted unlawfully in instituting an inquiry in terms of this section of the act.

She alternatively seeks that the terms of reference and institution of the inquiry be reviewed and set aside on the basis that it amounted “to an unconstitutional investigation into binding court judgments and orders and or violated the principle of prosecutorial independence”.

Judge Henney on Friday did not pronounce on Part B of the matter.

Jiba also wants the findings of the Mokgoro inquiry to be set aside as “irrational and inconsistent with proven facts” and that these “violated the principle of prosecutorial independence”.

Ramaphosa’s decision to accept the recommendations, Jiba has argued, is “unreasonable and unlawful in that it amounted to a violation of the principle of prosecutorial independence.”

She was also seeking relief from the president’s order that she never again be employed in the public sector based on the Mokgoro inquiry recommendations.

Jiba, as head of the NPA, and particularly during Zuma’s second term, left a trail of shattered careers of corruption-busting officials including Anwa Dramat, Shadrack Sibiya, Johan Booysen and Glynis Breytenbach.

All these officials were investigating matters that looped back into Zuma’s orbit, one way or another.

Hounded out of their positions, these officials were left to fend for themselves, wracking up crippling legal bills in the process — only to find charges later withdrawn.

Testifying at the Mokgoro inquiry, Willie Hofmeyr, former Deputy National Director of Public Prosecutions and the head of the Asset Forfeiture Unit, said that the trend to prosecute those fighting corruption had emerged under Jiba’s watch and had been “institutionalised” during that of her successor, Shaun Abrahams.

During Jiba’s tenure, no less than 12 judges on four benches hearing high-profile cases offered searing criticism of her conduct and behaviour as head of the prosecuting authority.

It is a supreme irony, then, that Jiba, in challenging her sacking, has asked to be returned to her position as “I am suffering harm as a result of the premature termination of my employment benefits to which I am entitled”.

Welcome to the club.

Jiba’s legal representatives have claimed that Ramaphosa’s firing of Jiba, without her salary and benefits, had seen her effectively “thrown into the streets” and that the decision had been “financially devastating”.

The NPA Act ensures that the NDPP’s salary “may not be less than that of a judge” a provision aimed at “insulating the NDPP against the risk of financial manipulation by the government”.

So far, the state has funded Jiba’s more than decade-long legal battles, but the cookie jar has now been removed from the pantry.

Out of work and out of luck, Jiba’s charmed life is about to hit a crossroads.

In April 2019 the Mokgoro inquiry into Jiba and her sidekick Mrwebi’s fitness to hold office made damning findings and painted a shocking portrait of the authority under Jiba’s watch.

Findings included that Jiba had lied under oath, that her conduct in multiple instances indicated “a lack of conscientiousness”, that she had compromised the independence of the NPA (in opting to charge former KwaZulu-Natal Hawks head, Johan Booysen), that she had failed to exercise discretion in the withdrawal of charges against Crime Intelligence head Richard Mdluli and that she had failed to comply with court processes and court orders.

“A series of decisions taken in her capacity as Acting National Director of Public Prosecutions, which were all set aside on review, as well as the comments and criticisms the courts levelled against her, have brought the NPA into disrepute,” the Mokgoro inquiry found.

The commission found that Mrwebi, nicknamed “the snail” for his ability to stall proceedings, “in taking the decision to withdraw prosecution of Mdluli without consulting [Sibongile] Mzinyathi” had acted contrary to the provisions of the NPA Act and had not acted with the integrity required.

The former head of the Specialised Commercial Crimes Unit had also not properly exercised his discretion in instituting and conducting criminal proceedings on behalf of the state and carrying out the necessary functions when he decided to discontinue the prosecution of Mdluli.

By withdrawing the charges when there was a prima facie case against Mdluli Mrwebi had displayed “flawed reasoning”. His conduct was “inconsistent with the provisions of the Prosecutions Policy Directives”.

“As established by the evidence, Mrwebi cared little about the merits of the Mdluli case or whether a successful prosecution was reasonably possible; he simply decided that the matter fell within the jurisdiction of the IG [Inspector General] and that it should be withdrawn and given to the IG.”

The Mokgoro inquiry also found that Mrwebi, after taking office in 2011, had taken the decision to withdraw the charges against Mdluli without consulting his colleagues, the SAPS or the North Gauteng director of public prosecutions Sibongile Mzinyathi.

Jiba and Mrwebi’s capture of the prosecuting authority goes all the way back to 2009 when both attempted to sabotage the corruption case against former national police commissioner Jackie Selebi.

Hofmeyr testified at the Mokgoro inquiry that Jiba and Mrwebi had assisted then Crime Intelligence boss Mdluli’s attempt in 2009 to arrest Selebi’s prosecutor, Gerrie Nel, on trumped-up charges.

A decade later the chickens have come home to roost, as they always do. DM