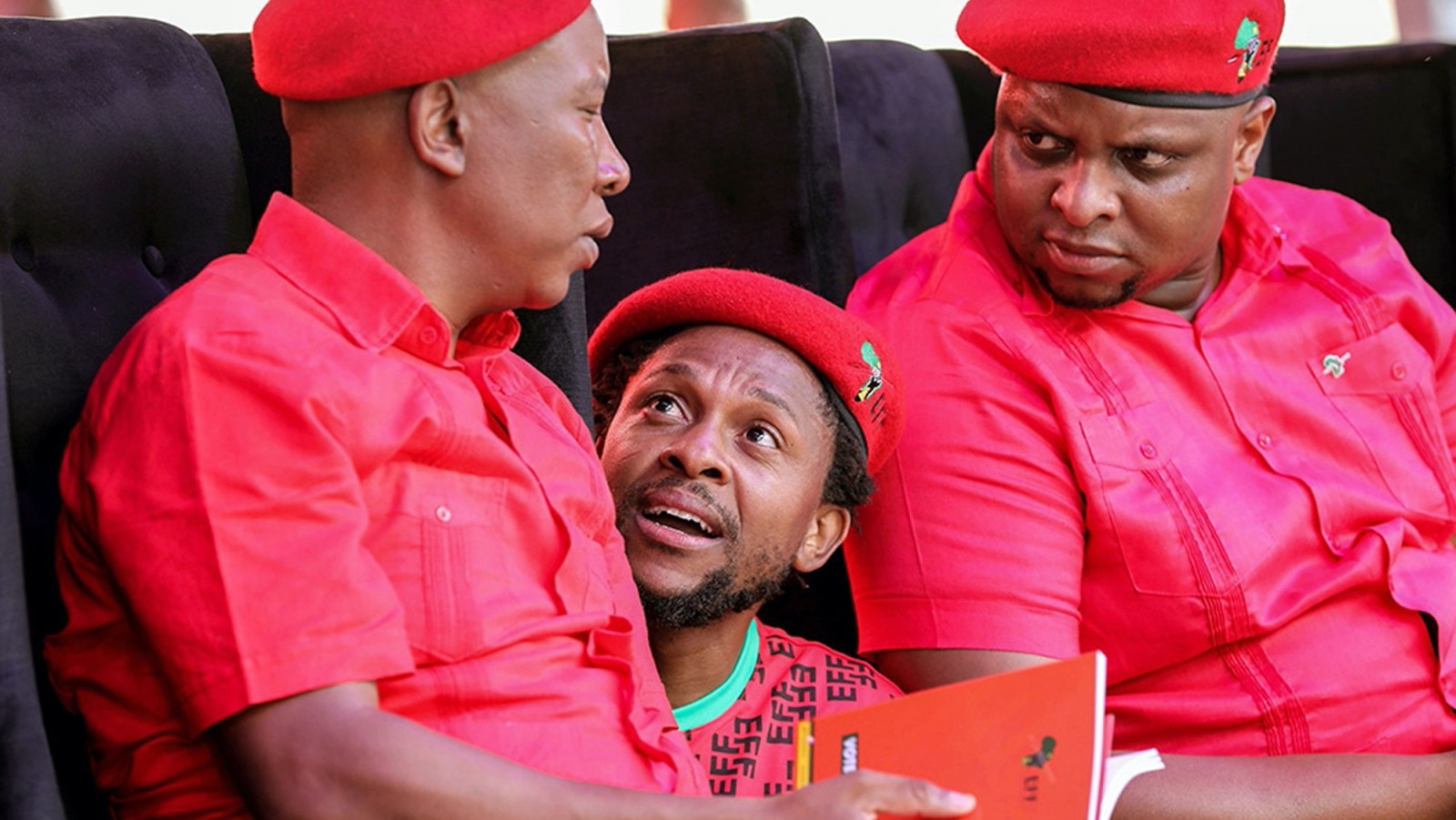 It is an increasingly common practice around the world for under-pressure politicians to concoct the craziest theories to explain why there’s so much of a spotlight on them. Followed by the glorious leader Donald Trump, for make benefit great nation of Racistan, their conspiracy theories tend to grow crazier and crazier with time and the ever-increasing depth of their desperation to stay in their positions of power, instead of swapping them for orange jumpsuits.

Still, it is rare to actually be able to see a conspiracy theory being created right under your nose. Such an example happened over the weekend, involving a throwaway comment during a press conference, a political party desperate to invent anything that could place it in an attack phase, and an a difficult-not-to-laugh-at attempt to manufacture something out of nothing. It is also an important real-time example of how politicians attempt to change the narrative and in the process make the public forget about their own crimes by inventing things that are not there.

Conspiracy theories have a long history in our politics. For years, former president Jacob Zuma claimed to be the target of a vast conspiracy against him, but “for internal party-political reasons” he kept refusing to name who was behind it. Even now, long after his disastrous presidency has ended, Zuma claims that even the people he himself appointed to Cabinet were apartheid spies, and yet gives no evidence to back this.

The reasons he and other politicians do these things is because it works, and they are desperate. If you can change the narrative, discredit your opponents, take some pressure off your back, change what people are talking about, you can “move on” to fight another day.

If you are under any kind of political pressure involving possible criminal legal action against you, if you fear prosecution, then it obviously helps to foreground this. You might, for example, try to prove that you are the victim of a group of people who have influence over, say, the National Prosecuting Authority, or the police, or the judiciary, or some other powerful body. This will help you later when you need to try to prove to voters that any charges against you are merely political, and not about your actual wrong-doing.

For much more than a year, ever since the first investigation about its involvement in the VBS scandal was published, the EFF has been trying to do exactly that.

On Thursday, Eskom held a briefing at OR Tambo International Airport to update the country about the newly introduced Stage Two load shedding. During the briefing, the Daily Maverick’s Sikonathi Mantshantsha introduced some humour into the situation by asking if Eskom was holding the briefing at the airport because Eskom Chair Jabu Mabuza was about to pick up the new Eskom CEO, or because Eskom was buying the Airports Company South Africa.

It’s the kind of question confident journalists ask people they have experience with in this kind of moment, often as a humorous way to get to an important point (in this case perhaps, when is Eskom appointing its new CEO).

Mabuza answered the question in a similar vein.

He explained that the briefing was at the airport because he had just returned from meeting Eskom workers in East London and because a meeting of top Eskom officials there was convenient (as it would be for an organisation with officials all over the country).

Then he added this line: “Even the Daily Maverick would prefer a briefing on a Thursday than on a Friday”.

It is a simple joke. But also, as Mantshantsha subsequently stated on Twitter, an understanding by Mabuza that Daily Maverick publishes daily during the week, and so a Thursday evening press conference would get much coverage for a Friday morning.

However, then, on Twitter, a video clip started to spread of Mabuza’s answer. It was pushed by the EFF’s spokesperson Dr Mbuyiseni Ndlozi:

Le’s be honest; had it been Brain Molefe who said he chose a day for Eskom Press Conference based on preferences dictated to by ANN7, there would be an outcry. In fact, all of you would be calling it State Capture. But Jabu Mabuza can be captured by @dailymaverick with impunity! pic.twitter.com/vkCAkuq8UG

He seems to be suggesting, seriously, that Mabuza and Eskom only held the press conference at the time and place they did because of Daily Maverick, and that this publication somehow controls Eskom’s diary. All of it when Mabuza has already explained why this happened in the way it did. But with enough willingness and a massive dollop of spin on it, this throwaway comment became a centrepiece of another massive conspiracy theory.

Ndlozi’s tweet, to his 660k followers, might be enough to push the idea on Twitter. For some, it was enough. On SAfm on Friday morning, at least one caller thought this was serious enough to merit further discussion and wanted to know why Eskom had held the press conference at that time just at the insistence of Daily Maverick. For him, a simple fictional tweet was enough to rearrange reality.

By this moment you, dear reader, could be excused for scratching your head in amazement. There, in front of all of us, the EFF was altering the laws of physics by creating something out of nothing.

Next was the statement by the EFF…

Ndlozi then followed up and used the institution of Parliament to send a formal letter to Mabuza asking about the timing of this press conference and the ‘role’ Daily Maverick had in it. 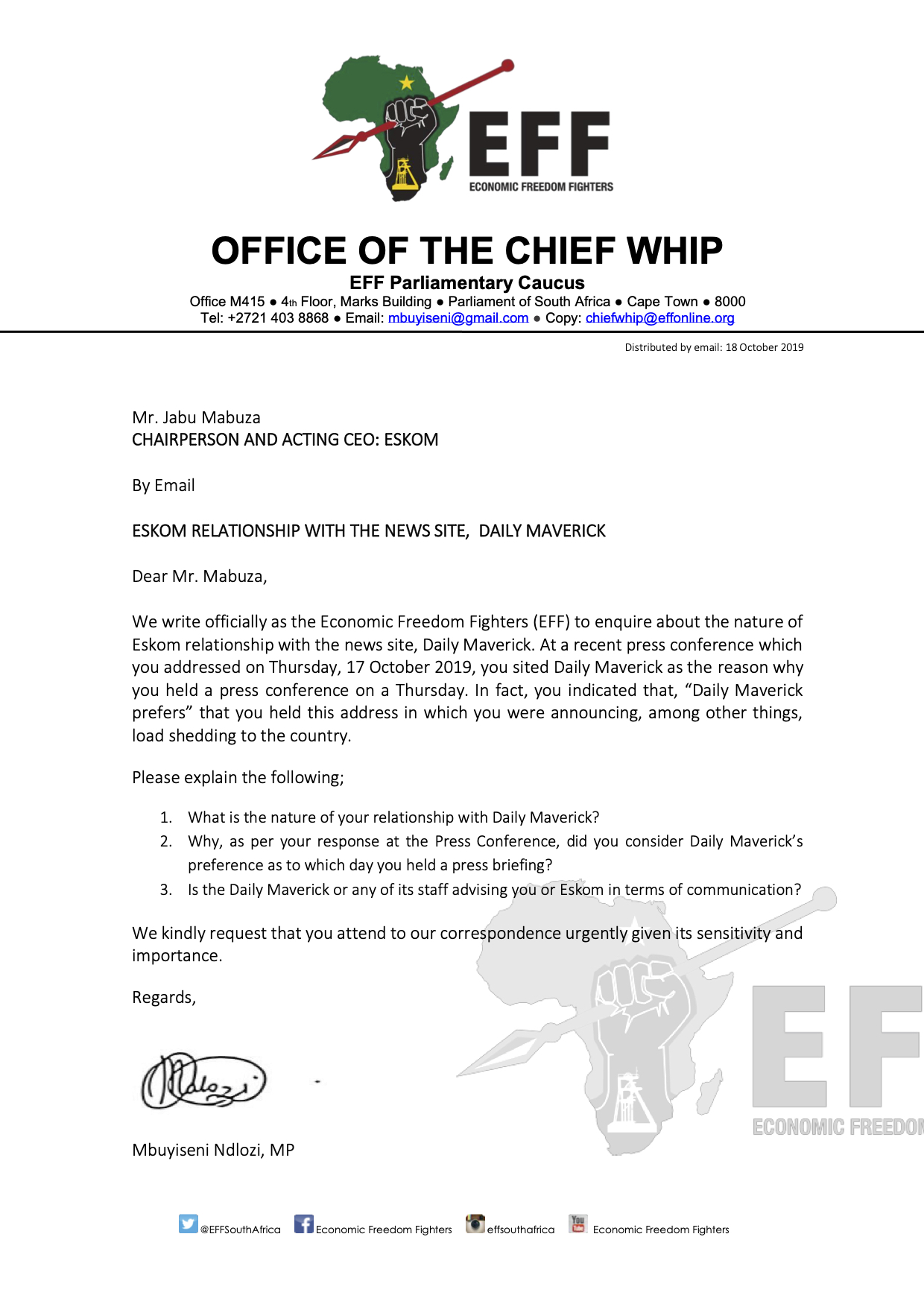 This, of course, changes the game. Because it now means that the formal media now has to consider reporting on it. The fact that the EFF is going to Parliament with the question means it may be difficult to ignore. And so, Parliament is used to give legitimacy to outright nonsense.

What is even funnier, or sadder, depending on how you see it, Ndlozi surely knows that this is outright nonsense. He has given every impression over the years of being one of of the more sophisticated and gifted politicians of our era. Why then would he be a party to this?

It is clear that the EFF is coming under heavy pressure. The fact is, the reporting from Daily Maverick, amaBhungane and of late the Sunday Times has proven how money flowed from VBS Bank and other companies to the accounts and credit cards of its leader Julius Malema and its deputy leader Floyd Shivambu. It pays then, to find any scrap of information that could conceivably be used, switch on the army of trolls/bots and then hope for the best.

Probably the greatest political fear that EFF has is of losing momentum. For a party in its position, it is very dangerous — it smashes the image of a “government in waiting” (just ask the DA), of being an unstoppable force, and it presents a risk of being less attractive to voters.

The EFF is also battling with the lack of a good enemy. It desperately needs someone to fight now that Zuma is out of power. By trying to pick fights with people like Mabuza and Daily Maverick and by painting them in racial and economic terms, the fighters are surely trying their best.

Considering that Daily Maverick’s Scorpio unit has led much of the reporting on the credit cards and VBS money used by Malema and Shivambu, it seems obvious that this publication would be a target. Anything to stop or discredit this reporting.

The bigger question, of course, is whether this works.

It is hard to say. Twitter is awash with conspiracy theories already, people make the most incredible claims. While some of them stick — in countries with more established democracies than ours, social media has led to young children being more vulnerable to diseases such as measles than at any other time in the past 60 years, and the impact cannot be ignored — many of them wilt in the Twitter continuum.

And while it seems unlikely that latest conspiracy theory will have any effect on the majority of South African people, it is equally unlikely to stop the EFF and others from continuing with such campaigns — there’s always hope that the next one will be more successful.

It’s about chipping away at reality, about distraction, changing the game, just putting question marks in peoples’ heads. Anything to stop scrutiny of their alleged corrupt ways.

If this state of utter madness continues for long enough, it can have a cumulative effect on reality. This is the danger that the country and our politics may face. Perhaps the EFF should ask itself: is it really worth wreaking havoc in South Africa to protect the misdeeds of its leaders? Alleged misdeeds, of course. DM