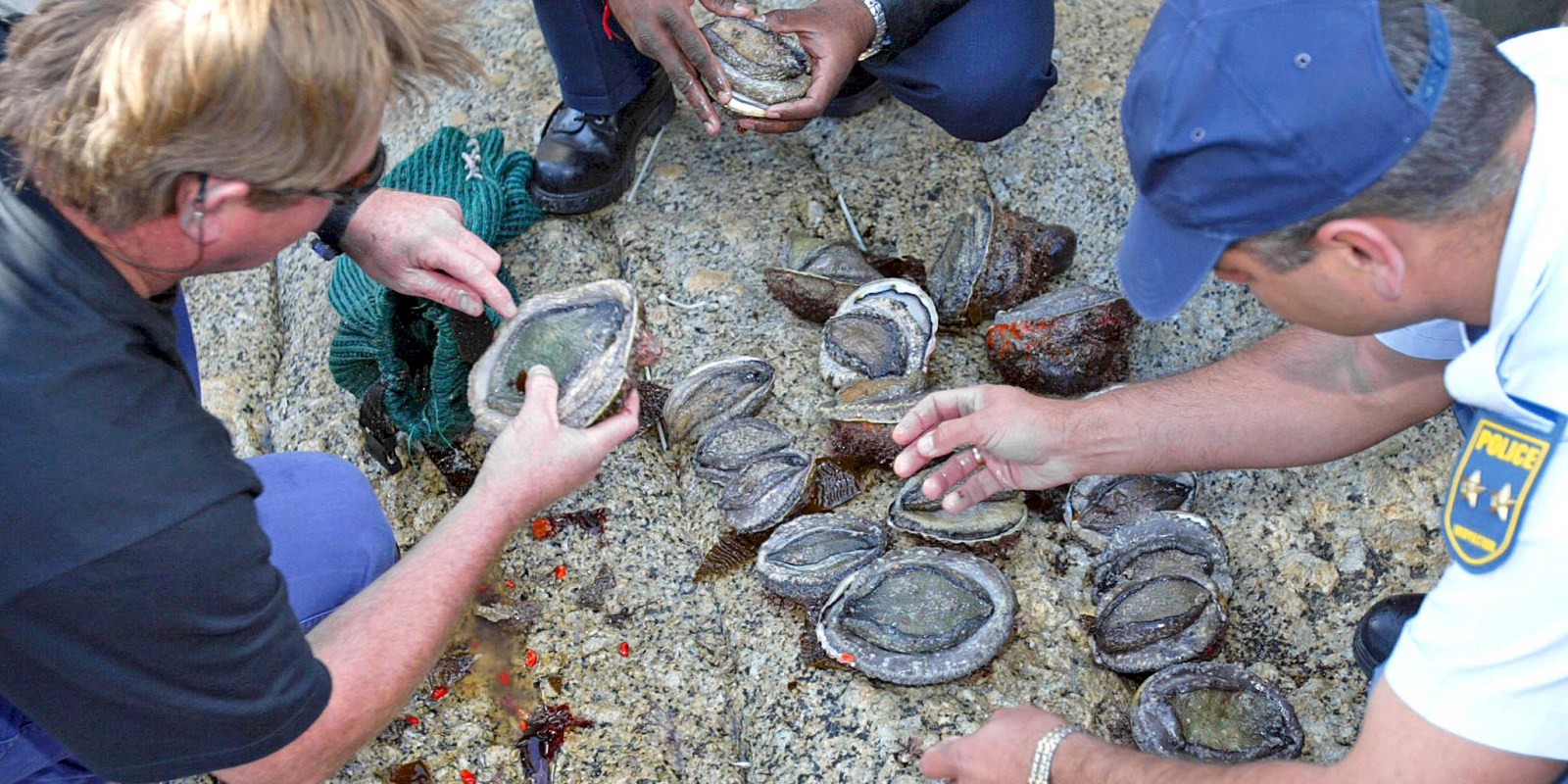 Abalone poaching is out of control in the Overstrand, says Western Cape Police Ombud Johan Brand. His report on Thursday to the Western Cape Legislature’s Committee on Community Safety, tells a complex tale of organised crime, increasing violence and systemically broken policing.

Abalone, known colloquially as perlemoen, are large molluscs, highly favoured in restaurants across Asia. Abalone poaching, which has exploded in recent years, is responsible for the loss of an estimated R628-million a year, if it were fished as a legal commodity. Western Cape Police Ombud Johan Brand’s report observes that, at one point, there were 300 boats on the water in Gansbaai, illegally harvesting the most threatened and smuggled marine species in South Africa.

“Abalone poaching in the Overstrand is mainly driven by syndicates or organised criminal networks,” Brand told the committee. “In fact, the 28s (gang) have deployed a well-known gangster in that area to run the abalone poaching syndicate.” This new influx of organised crime has terrified residents and put local cops to the test.

Earlier in 2019, Brand’s office, tasked with investigating complaints of police inefficiency and misconduct, put out a request for public comments in the Overstrand. They received almost 300 replies from civilians in Gansbaai, Hermanus, and elsewhere detailing the damage illegal fishing had wreaked on the community.

“Abalone poaching is huge, and what comes with it is scary,” said one comment. “Young children are bribed with clothes and drugs to become drug runners. When they drop out of school, their families are torn apart.”

Over the past three years, there has been a marked decrease in the amount of abalone confiscated from poachers. Yet Brand does not think that is cause for celebration.

“Residents have indicated that they don’t report crime anymore because of poor responsiveness by SAPS,” Brand said, continuing, “the assumption can be made that the integrated operations between the different law enforcement agencies have decreased, and the focus has clearly shifted away from abalone-related crimes.” In other words, SAPS are missing the threat.

In his presentation, the ombud highlighted the inadequacy of police responses, detailing small-scale and institutional problems in the way SAPS handles poaching.

Local SAPS operating procedures indicate four main causes of crime: drugs, liquor, firearms, and vehicles. They stress the importance of violent crimes, crimes against women and children and property crimes — but the words “abalone” or “marine” do not appear once.

So far, Brand said, SAPS in the Overstrand has confiscated more than 200 tonnes of illegally poached abalone, but it stores those shellfish in a single containment facility — a sitting duck for prospective burglars. According to the report, upwards of R40-million worth of abalone has already been stolen from the warehouse. “These crimes are not being investigated by national forces, just local stations,” Brand told the committee. “And that’s because we are not looking at this as an organised-crime issue.”

It is unclear whether SAPS consider abalone poaching to be organised crime, but every available indicator suggests it does not. According to emails send to the ombud from the National Head of Crime Registrar, “abalone crime is indicated as a B crime”, akin to urinating on the street or riotous behaviour.

In Hermanus, Stanford, and Gansbaai there is less than a single police officer for every 350 residents, well below the UN’s recommendation of one officer for every 200 civilians. There are eight reservists in the Overstrand — none in Gansbaai. At the meeting, a representative from the Department of Community Safety alleged that her department had offered R5-million to hire new reservists, but SAPS did not take the money. These gaps have serious consequences — according to the ombud’s report, 78% of the crimes reported in Hermanus during the 2018/19 operating year have gone without arrests.

In this fight, SAPS face a terrifying opponent.

ACDP MPL Ferlon Christians described a man who took photos of smugglers in the act.

“They came up to him and said, ‘we know where you stay. We will follow you, and we will kill you.’ ”

Committee chair and DA MPL Reagan Allen spoke about his recent visit to Pringle Bay, where he met locals who had been menaced by organised crime syndicates. “Speaking to residents yesterday,” he said, “it’s clear that people who speak out are being threatened on this matter.”

One Hermanus resident who did not want to be identified told the committee:

“I have personally been to the police station with documentary evidence of people transporting materials into the water. The officer who took my statement said he would put it into the file, but we know they won’t put it into action because they’re scared.”

Police absenteeism in the area is on the rise as well, possibly indicating low morale.

Poachers signalled their commitment to combating law enforcement earlier in 2019 by blowing up a boat the ombud called “a brand new vessel with great capabilities”.

The ombud’s recommendations were somewhat less drastic, focusing largely on the need to review resources allocated to the Overstrand stations. He also highlighted the importance of treating abalone crimes as serious — the same as rhino poaching — and pushed for a “crime prevention water wing” to police small harbours.

In the past, there have been widespread allegations of police corruption. DA MPL Lorraine Botha pressed the ombud on the issue, but he declined to answer.

“We need to revisit the current policing mode,” according to Brand. For now, his main criticism is simply that “SAPS does not have the ability to effectively investigate crime.” DM