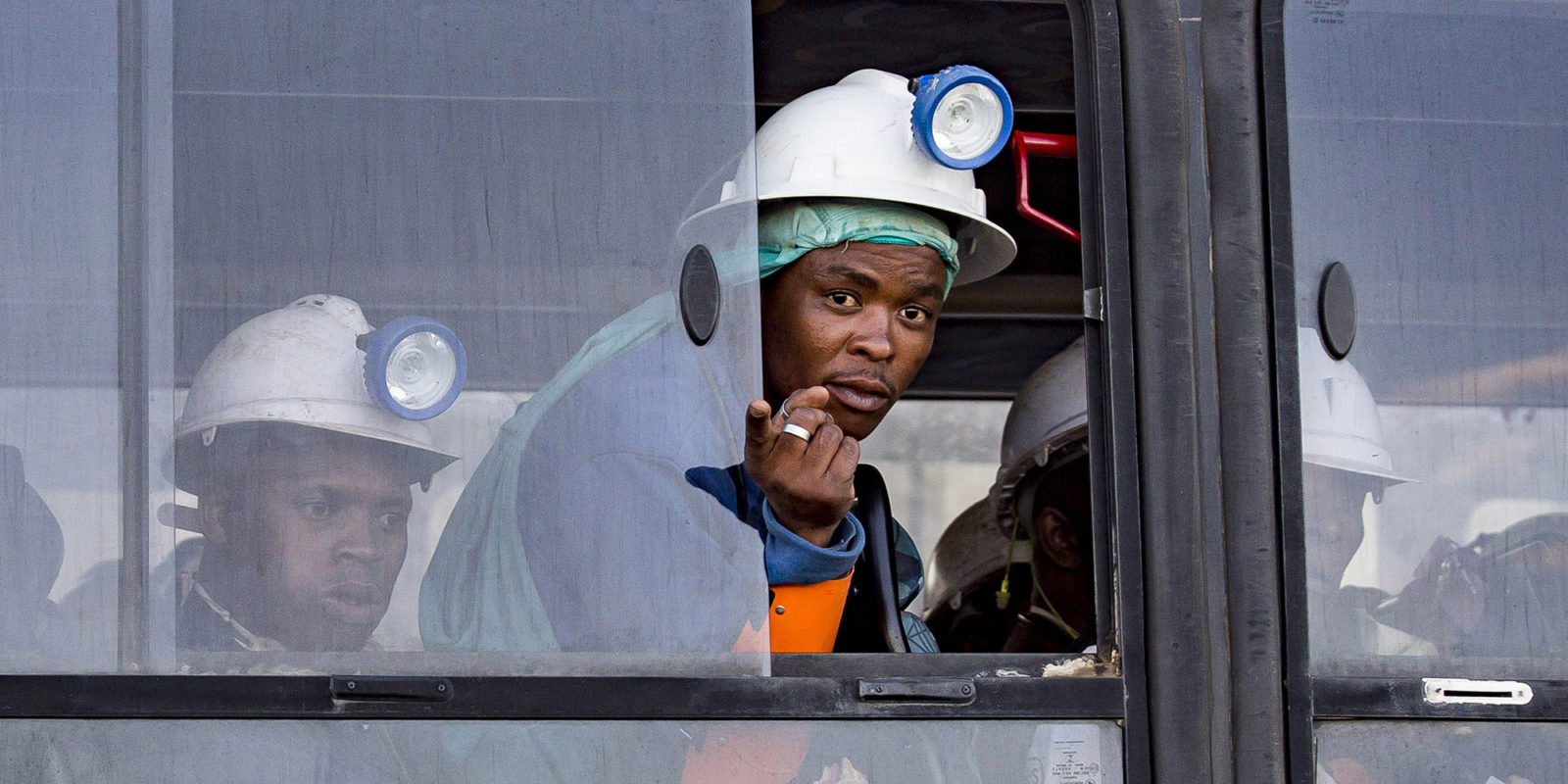 South Africa’s mines are not the death-pits they once were and they are also mostly generating more profits than they did in recent years, says the writer. (Photo: EPA-EFE / STR)

South Africa’s mining industry (knock on a support pillar of wood) looks set to have by far its safest year yet. If the current rate is maintained, the number of deaths in 2019 will almost halve to a record low. This is thanks in part to a changing production profile.

In the year to 23 September 2019, there were a regrettable 35 fatalities in South Africa’s mining industry, according to data compiled by the Minerals Council South Africa. That underscores the well-known fact that mining is a dangerous occupation in South Africa.

But it is not nearly as dangerous as it was in the past, and not just when compared to the apartheid era, when a migrant black labour force was subjected to “commodification and dehumanisation”, to quote from The Night Trains, Charles van Onselens’s new book about the locomotives that delivered Mozambicans to the Witwatersrand’s mines. 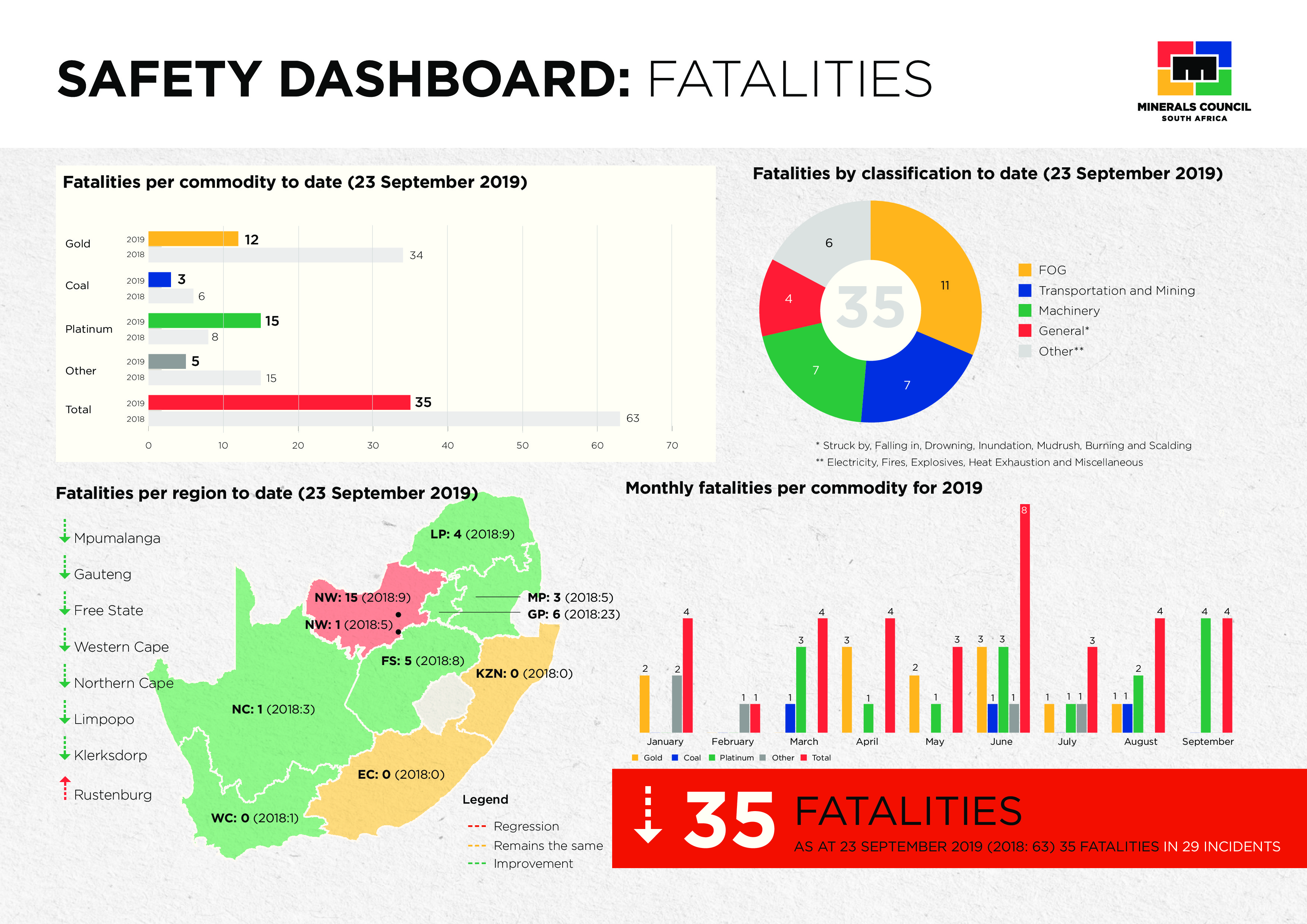 In the same period in 2018, 63 miners were killed on the job in South Africa. If the current trend continues — and of course it may not be maintained — 2019 will record fewer than 50 fatalities, which would be the safest year by far in the blood-drenched history of South African mining.

The benchmark year to date for mine safety was 2016, with a fatality figure of 73, a historic low since records have been kept. In 2017, deaths spiked to 90, mostly in the gold sector, before falling again to 81 in 2018. “Zero Harm” remains an elusive goal, but massive progress has clearly been made since apartheid when hundreds of miners died underground each year. 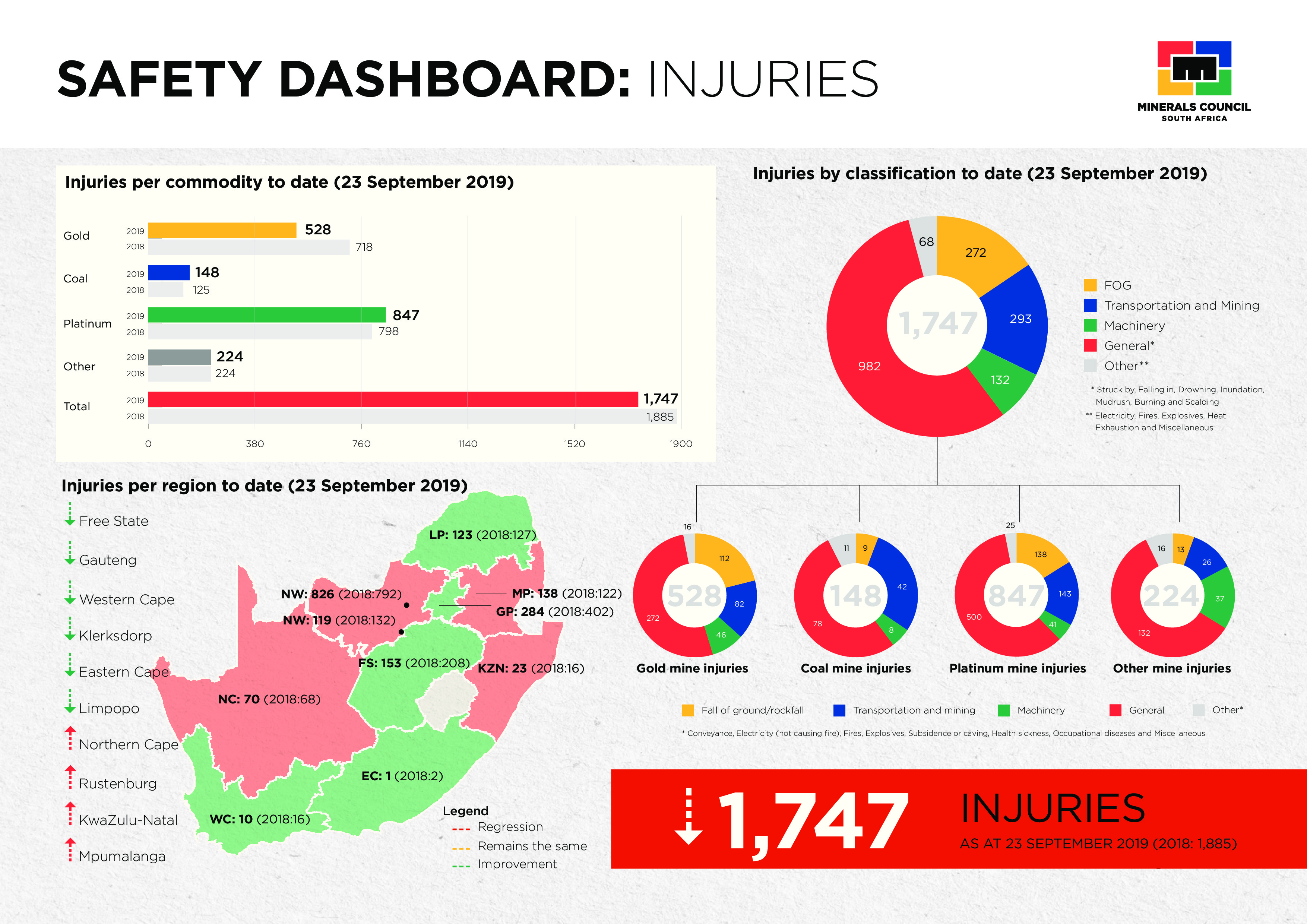 There are a number of reasons for this trend. The safety of a mostly black labour force that was subjected in the past to grotesque exploitation and put in harm’s way with little regard for life and limb has become a political priority of the governing African National Congress (ANC).

The industry, in response to not just political and trade union pressure, but also investor concerns, has made huge improvements in safety. These have included innovations such as netting to catch falling rocks at the stope, where drilling and blasting take place. This alone is credited with saving scores of lives in recent years. Workers are also allowed to refuse to enter an area if they feel it is unsafe, without any threat of disciplinary action.

Other factors that may explain the relatively impressive 2019 safety record to date include the five-month Amcu strike at Sibanye-Stillwater’s gold operations, which ended in April. That translated into fewer work hours underground in mostly deep-level gold mines. Fewer workers underground simply reduce the chances of someone being killed.

According to the Minerals Council South Africa, it is 0.05 at present. That remains higher than the 0.02 recorded by the mineral-rich Canadian province of Ontario in 2017 (which had no deaths in 2016), or the 0.01 posted by Australia in 2016 (the comparative rates for 2018 still are not available). But the trend is narrowing.

A key reason for this has been South Africa’s changing production profile. The pivot to mechanisation, notably, but not exclusively in the platinum sector, has paid huge dividends and not just in a renewed cash flow to investors. It is also paying a social dividend in safety strides and a reduced loss of life, as mechanised equipment does a range of tasks that humans once did in dangerous circumstances, such as drilling and bolting. This trend will accelerate wherever South Africa’s challenging geology allows.

South Africa’s mining production profile is changing in other ways as well. Accountancy PwC’s latest report on the domestic mining industry highlighted the rapid rise of manganese production, a stark contrast to the steady decline of gold, which is being pulled down by the laws of economic gravity.

Over the past 15 years, the output of manganese, used to bolster the strength of steel, has quadrupled, while gold production is less than half of its 2004 levels. Iron ore and chrome production have also been climbing, with the latter more than doubling over the past decade-and-a-half. And these commodities are typically mined here in shallow, opencast operations which by their very nature are safer than the deep-level gold mines that dominated the industry for decades.

Indeed, according to data provided to Business Maverick from the Minerals Council, the most impressive safety improvement in the year to 23 September 2019 has been in gold, with 12 deaths recorded in the sector, a third of the 2018 total of 35 for the same period.

The data also shows that even changes such as mechanisation may have their limits. Platinum deaths for the period spiked to 15 from eight. It would be revealing if a breakdown was given between mechanised and conventional mines, but that has not been done. In the coal sector, fatalities halved from six in 2018 to three in 2019. In the “other” category the number of deaths fell to five from 15.

South Africa’s mines are not the death-pits they once were, and they are also mostly generating more profits than they did in recent years, which highlights another positive trend. Mines can be safer and more profitable at the same time. (In the past, profits were often inflated at the expense of safety measures.)

Among other things, improved safety should lessen the impact of the mandatory production stoppages that take place when fatal accidents occur.

This is good news for all stakeholders in the mining industry. Zero Harm may or may not be achievable — but having a goal is useful and the sector is getting there. BM