Xenophobia, like racism, must be treated as a crime 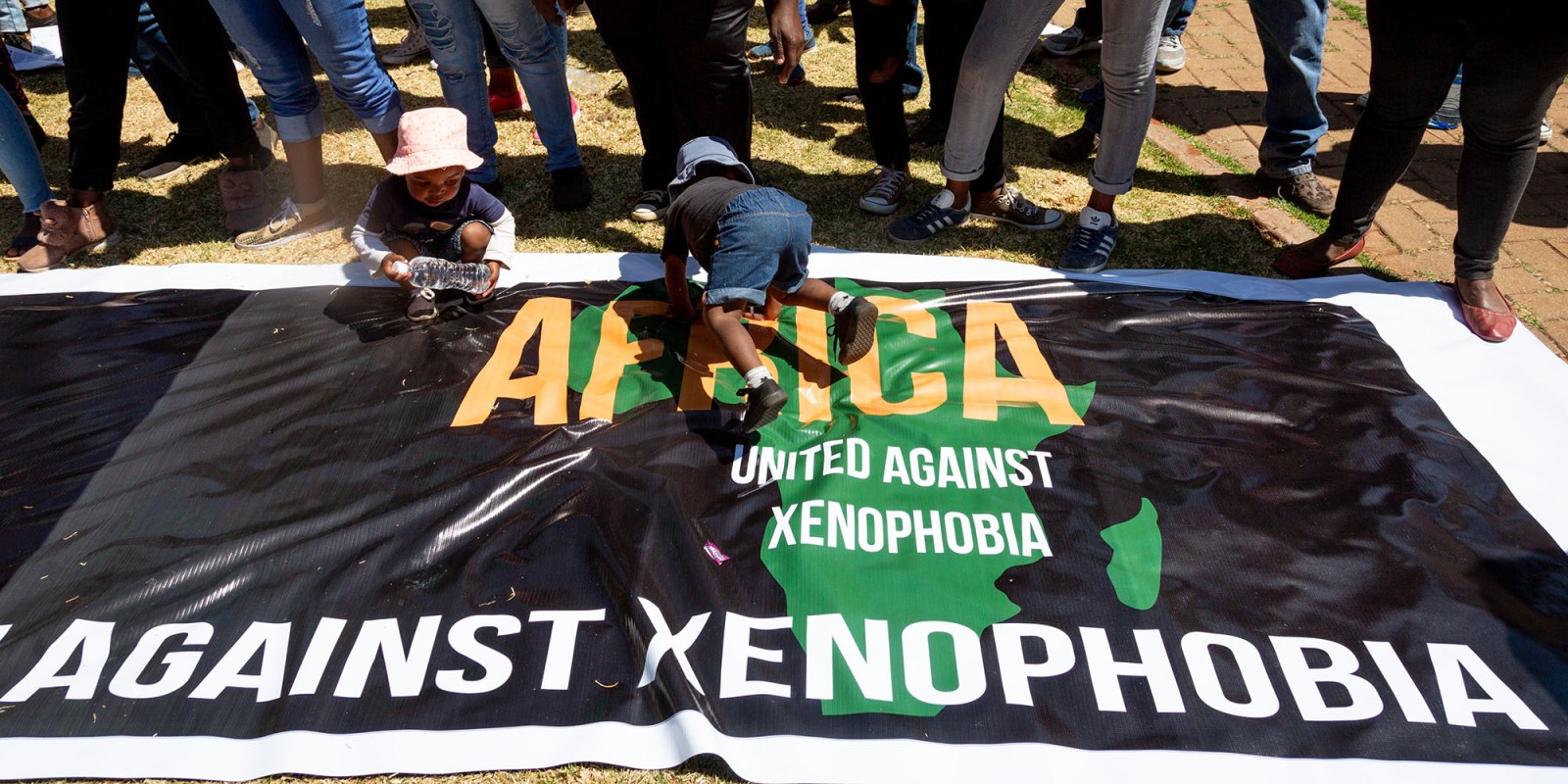 Children play on a banner against xenophobia in preparation for a march in Johannesburg, South Africa, 14 September 2019. EPA-EFE/Yeshiel Panchia

Persecuting foreigners is contrary to SA’s constitutional promise that the country belongs to all who live in it. Analysis by Themba Masuku

In many ways, xenophobia is no different from racism. Its victims suffer real harm. Those who commit these crimes are motivated by prejudice, intolerance, ignorance and hatred based on people’s identities. Xenophobia and Afrophobia – the hatred of foreigners from other African countries – are forms of racism. Victims of xenophobia, as with racism, are excluded, discriminated against and marginalised.

Unlike racism though, xenophobia is not regarded as a crime in South Africa. People arrested during xenophobic violence are not charged with the crime of xenophobia but with associated common law crimes such as assault, looting and destruction of property.

The South African Human Rights Commission reports that after the 2008 xenophobic violence in which 62 people were killed and thousands displaced, 597 arrests were made. Only 16% of these resulted in a conviction, and these convictions were for malicious damage to property and other common law crimes. Offenders had the option of paying a fine to avoid a custodial sentence.

South Africa’s Prevention and Combating of Hate Crimes and Hate Speech Bill (the Hate Crimes and Hate Speech Bill) B9-2018 is a significant step towards the criminalisation of xenophobia. Under this bill, any act intended to be harmful or to incite harm, or promote or propagate hatred on the basis of among other characteristics nationality, birth, migrant or refugee status and language, is a statutory crime. When the bill becomes law this conduct will be punishable.

However, the bill collapsed in the fifth Parliament, which closed in March this year. Given the escalation of xenophobia in South Africa, there is an urgent need to revive it. In his 2019/20 budget speech, the Minister of Justice and Constitutional Development Ronald Lamola committed to reviving the bill as a priority among government’s efforts to criminalise racism and other hate crimes.

Contrary to the government’s position that most South Africans are not xenophobic, the Human Sciences Research Council found in 2008 that 62% of the adult population agreed with the statement that immigrants increased crime. When asked the same question in 2016, about 66% concurred. The research showed the widespread nature of anti-immigrant stereotypes among South Africans.

Another study by the Institute for Justice and Reconciliation in 2017 confirmed the high levels of prejudice among South Africans against foreigners. The findings were that 56% of South Africans didn’t trust African foreign nationals and 40% said they would act against foreigners who started a business or accessed services in the area where they lived. These attitudes are contrary to South Africa’s constitution and the values of ubuntu that form the bedrock of this democracy.

Several reasons have been advanced to explain xenophobia in South Africa. The general view is that foreigners provide cheap labour, sell their goods at lower rates than locals, cause crime and compete with locals for scarce resources. A distinction is not always made between whether foreign nationals are in the country legally, illegally or because they are refugees.

Nevertheless, those who believe that their circumstances have been negatively affected by foreigners tend to feel deep anger towards them. This anger is exploited by unethical politicians looking to distract from their own failure to deliver. Criminal networks seeking to create a chaotic environment in which to loot also misuse the situation.

Several multi-pronged strategies are needed to stop xenophobia. Government’s calls for tighter borders, strict regulations over businesses operated by foreigners, arrests and mass deportation of illegal foreigners have not worked in the past.

Instead, these approaches probably drive up anti-foreigner sentiments as they portray African foreigners as problematic rather than people who contribute to the country. When government is perceived to be failing in ‘dealing’ with foreigners, aggrieved communities often use these failures as an excuse to commit xenophobic violence.

Current government interventions also don’t address the complex root causes of xenophobia. But rather than work against negative and harmful perceptions, many politicians do the opposite. Johannesburg Mayor Herman Mashaba has frequently linked the city’s failures to illegal foreigners. Former deputy police minister Bongani Mkongi was rebuked by government for allegedly saying it was “dangerous” that a South African city was “80% foreign”.

Such statements fuel anti-foreigner sentiment. The Hate Crimes and Hate Speech Bill seeks to address the problem of government officials making foreigners scapegoats for state failure to deliver basic services. When the bill becomes law, these actions will be punishable.

South Africa’s Human Rights Commission has successfully brought charges against several individuals for crimes related to racism. The conviction of Vicki Momberg and her two-year jail sentence gives hope that the crime of xenophobia can be successfully prosecuted in a criminal court. Punitive measures against André Slade, Penny Sparrow, Angelo Agrizzi and Adam Catzavelos are also significant. They received fines ranging from R50,000 to R250,000.

If South Africa’s government is serious about ending xenophobia, the Hate Crimes and Hate Speech Bill needs to be finalised. The country cannot survive on its own – it needs integration with the rest of Africa. South Africa’s prosperity also depends on the extent to which it can attract skilled people and trade on the continent. If the constitutional promise that South Africa belongs to all who live in it is to be realised, xenophobia – like racism – must be rejected. DM