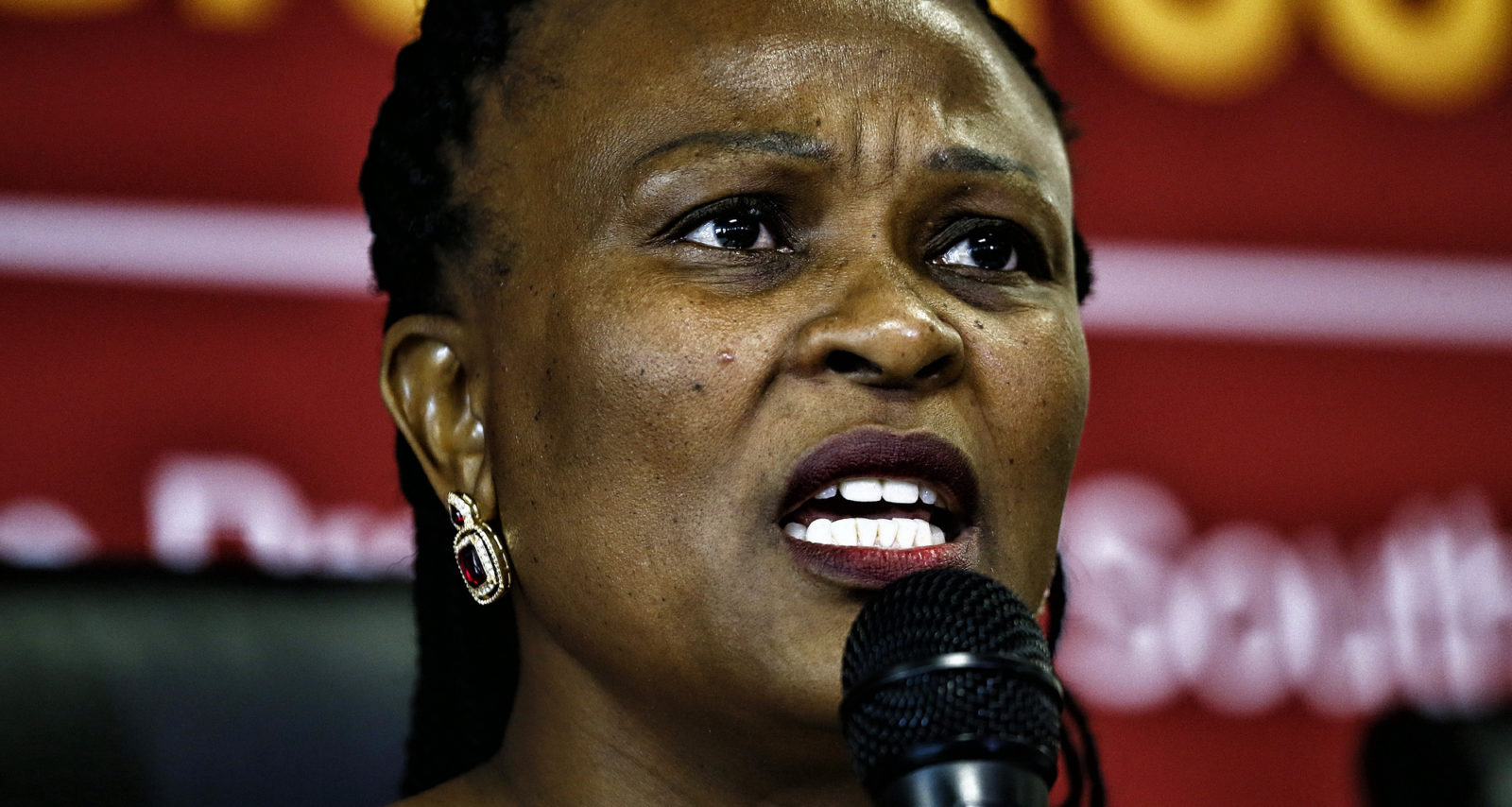 A former IPID investigator found to have misled the Commercial Crimes Court in a matter involving a rogue Crime Intelligence officer implicated in several crimes including an alleged CI operation at the ANC's 2012 Mangaung elective conference, is at the centre of the public protector's investigation of the former IPID head.

The backdrop to the current legal challenge by Robert McBride of a report by the public protector into allegations of maladministration by the former IPID head is a veritable hall of mirrors and warrants some careful navigating.

At the centre of the complaint lodged with Mkhwebane into McBride is former IPID investigator Cedrick Nkabinde who resigned from IPID in May 2018. This after he had allegedly been offered a senior position with Crime Intelligence in exchange for implicating McBride, who was then Executive Director of IPID.

IPID had been investigating a number of senior SAPS officers on charges of fraud, corruption and defeating the ends of justice, including former acting National Commissioner, Khomotoso Phahlane.

At that conference Jacob Zuma was re-elected to lead the governing party. His challenger at the time was Kgalema Mothlante.

According to IPID, Tshabalala had been given a budget of R50-million for the operation.

It is evident that current drama between IPID and the Public Protector is taking place against a much larger backdrop and links back to deep state key players who may have been deployed to serve factional interests in the ANC and who have allegedly abused taxpayer’s money to this effect.

IPID was also investigating the alleged attempt to launder R45-million prior to the ANC’s watershed 2017 Nasrec elective conference where Cyril Ramaphosa was elected to head the ANC by a slim margin.

According to IPID the bid to divert the R45-million through the purchase of a “grabber” (which sells for R8-million) had been at the insistence of then CI acting head, General King Bhoyi Ngcobo.

Ngcobo was previously Head of VIP Protection Services and one of president Jacob Zuma’s “most trusted bodyguards”. He was appointed by Zuma to the top job in August 2017, four months before the Nasrec conference.

As such, these IPID investigations would cut to the very heart of the undermining of the ruling party’s own apparent internal “democratic” traditions and the fairness of the process. If true, they would also provide another piece in the sprawling puzzle of the capture of the South African state.

Tshabalala has a long and astounding history including being convicted and sentenced to 10 years in 1994 for a cash-in-transit heist in Mamelodi Pretoria. Tshabalala spent only two weeks in jail after appealing the sentence.

However, in 1996, by the time the court upheld the jail term, Tshabalala, despite the conviction, had begun serving as a SAPS reservist and had failed to hand himself over to prison authorities.

In July 2001, according to police HR documents accessed by Times Live journalist Graeme Hosken, Tshabalala became a police spy and embarked on his crime intelligence training in 2003 while only receiving his security clearance in 2014. Tshabalala was also implicated in a R200-million heist at OR Tambo International Airport in March 2017.

The elusive Tshabalala was finally arrested by IPID officers in January 2018 on charges of fraud, corruption and theft relating to an amount of R563,000 from the SAPS Secret Services Account.

Nkabinde had been appointed by IPID to investigate Tshabalala. However, he later, according to Tshabalala’s attorney, Mpesi Makhanya, offered to testify on behalf of his client in a bail hearing, which resulted in Tshabalala’s release.

Makhanya later told magistrate Nicola Setshogoe that Nkabinde had told him “My brother, I wish I could assist that brother (Tshabalala). He must be out on bail and not in detention.”

Nkabinde later denied that he had offered to testify in support of Tshabalala but in August 2018 Setshogoe found overwhelming evidence that Nkabinde had misled the court, bringing his credibility into question.

Over and above his investigation into Tshabalala, Nkabinde had also been tasked by IPID to investigate former acting National Commissioner, Khomotso Phahlane.

McBride has also alleged that Nkabinde had been offered a senior position with Crime Intelligence in exchange for implicating him and IPID in maladministration.

It was Nkabinde who also wrote to Minister of Police, Bheki Cele, a communication which later resulted in parliament’s police portfolio committee deciding not to extend McBride’s tenure as IPID head.

Responding to the PP’s report McBride’s attorneys said that the investigation by her office is “fatally flawed” and that the Section (7) 9 notice sent to McBride on 14 May 2019 contained “flagrant factual inaccuracies, illogical conclusions and errors of law.”

The PP’s investigation was flawed, said McBride, for several reasons, including that the complaint was filed with the office two years after the alleged occurrence of the matters being investigated.

Marais, in his letter to Mkhwebane highlighted several other “fundamental factual errors that would have been apparent from a rudimentary investigation by your office”.

These included the fact that “the essence of the complaint against our client as being certain conduct by him as the Executive Director of IPID in March 2016. As is public knowledge, our client was at this time on suspension and could not possibly be responsible for setting up a task team within IPID”.

“There is another fundamental problem with the investigation. We do not believe that the complainant, Mr Chad Wells, is a real person. Please could you confirm whether the Office of the Public Protector has met with him and confirmed his identity. We also request a copy of the complaint and proof of the identity of the complainant.”

McBride’s legal team concluded that “we regret that a pattern of flawed investigations into our client by your office is emerging. It is becoming increasingly difficult for the fundamental problems with the investigations into our client to be explained without concluding that there is an ulterior motive to target our client. We would be glad to have these concerns resolved and allayed by full and frank answers to the issues raised above. By contrast, the absence of such full and frank answers will merely strengthen the concerns”.

In her report, Mkhwebane found that Nkabinde had been suspended as punishment for his protected disclosures of alleged unethical conduct by McBride including the appointment of Botha.

She recommended that current acting ED of IPID, Victor Senna, should, within 30 days, take steps against all IPID members who had been implicated by Nkabinde.

She also ordered within 60 days a judicial review to set aside Botha’s appointment as well as the development of a policy to deal with whistle-blowers.

In a response to the PP’s Section (7) 9 notice the IPID officials implicated, including McBride, concluded that the PP’s assertion that the charges that IPID had instigated against Nkabinde had been “spurious” could not be substantiated as these had never formed part of the investigation by the PP’s office.

“You do not have the evidence before you to make this determination. Mr Nkabinde’s allegations have, moreover, been withdrawn.”

Nkabinde resigned from IPID in 2018 after a “settlement” agreement which included the withdrawal of his complaints against McBride.

At the time Nkabinde told EWN: “It was a mutual understanding. They dropped the charges against me and I resigned in good faith… just an ordinary resignation based on the settlement agreement.”

McBride said he would be consulting with his attorneys after studying the report.

“The vast amount of the report deals with a complaint that are identical to, and that was previously investigated by the Public Service Commission. The PSC found the complaint to be unsubstantiated. It seems the PP failed to take this investigation into consideration. The PP’s report is clearly reviewable. It is irrational as the findings cannot be reconciled with the facts.”

He added that the report was also in essence “an erosion of IPID‘s independence and is likely to interrupt IPID’s investigation into industrial scale corruption and looting within the SAPS as it spuriously implicates most of IPID’s executive members. It is clear that the intention is to disrupt the functioning of the IPID.”

McBride questioned the timing of the report, saying its release is on the eve of the widely anticipated testimony of senior IPID investigators at the Zondo Commission into State Capture was “suspicious”. He added that prior to his attorneys receiving the report formally, “it was not received formally by myself rather it was leaked to the Crime Intelligence, the media and various IPID employees”.

He called on IPID to defend its employees against this fight back campaign. “If not, IPID will become a tool in the hands of the corrupt and succumb to political pressure.”

McBride indicated that he would “approach the High Court for an interdict and take this ridiculous report on review”.

“I am also aware of numerous engagements between the complainant and individuals in Crime Intelligence, the team from the North West headed by General Mabula which is currently under investigation by the IPID (for torture and murder) and senior officials in the Police Ministry office,” he said.DM