Young African: Afrophobia is neither our heritage nor our future 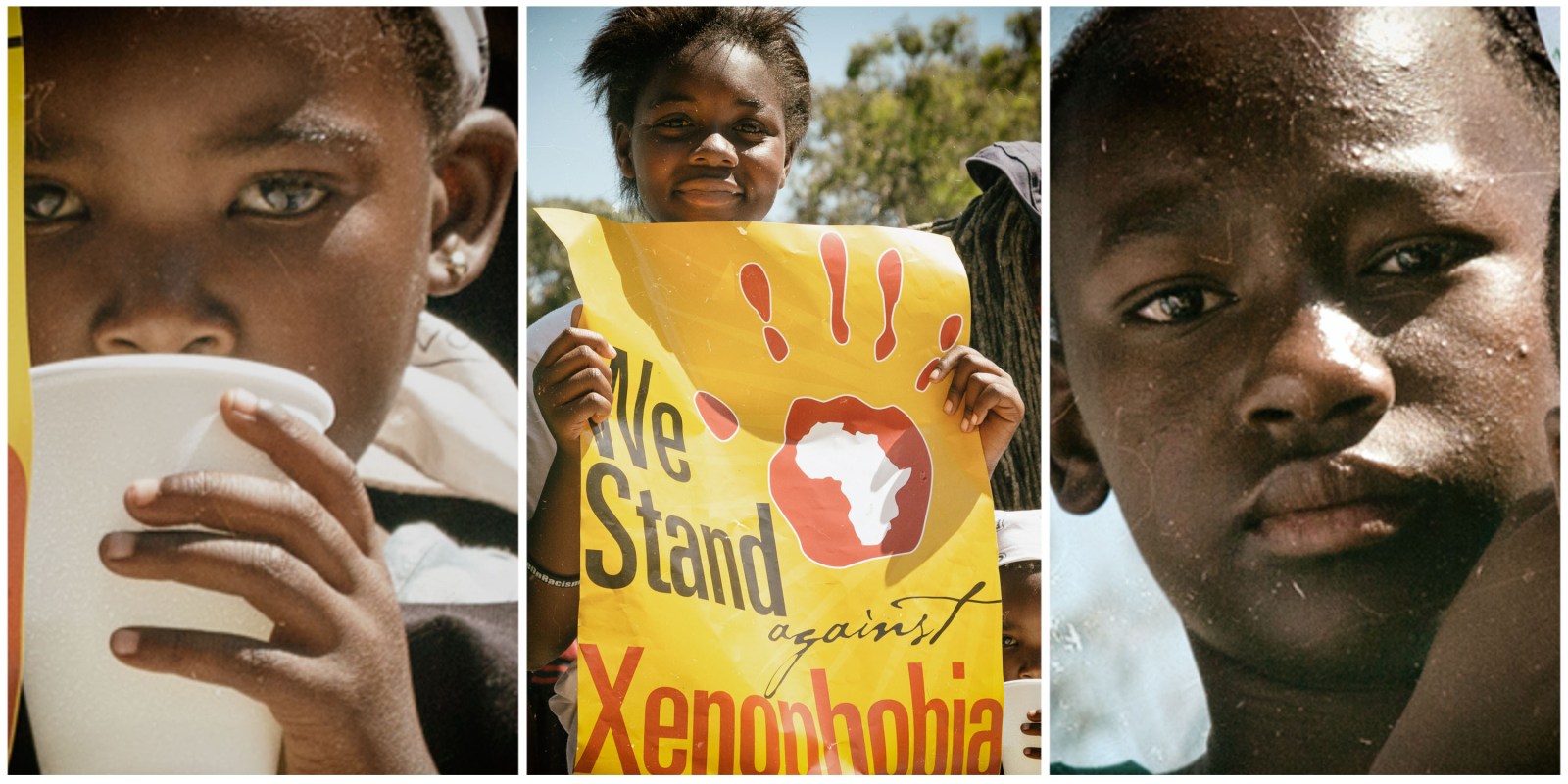 A young woman holds up a placard against xenophobia in preparation for a march in Johannesburg, 14 September 2019. Civil society, NGOs and private citizens marched in protest against the recent spate of xenophobic violence that has beset the country. (Photo: EPA-EFE / Yeshiel Panchia)

A young person writes why her fellow Africans are still not free and why liberation is a lie.

I was only 11 when I wrote my first article on Xenophobia (An Open Letter to All South Africans: Je Suis Kwere Kwere)

I’m 15 now and nothing has changed. For the past four years, I’ve witnessed shops and property belonging to foreigners being burnt and looted and people beaten and burnt to death like animals because they are not South Africans.

It has been four years and I still don’t have the emotional capacity to understand why my people are under fire. Nothing has changed, the attacks are still only on foreigners of African descent. The reasons for the attacks have not changed. The government’s response to the attacks has not changed and they minimise the attacks as “acts of pure criminality”.

I still live in a Jewish-dominated neighbourhood where at least 10%-20% of the population is foreign, has come into the country in the past 10 years and owns businesses in the area. They have not been looted or attacked. Next to me is Cyrildene which is a Chinese-dominated suburb. Most of the Chinese in this community have come into this country in the past 20 years; they have not been attacked. None of the China Malls and shops has been looted or attacked. Bedfordview, where some of the most notorious drug kingpins live, is still a quiet, safe neighbourhood.

The leadership in South Africa has continued to call the thousands of people marching on and beating, stealing from and necklacing only certain people, “pure acts of criminality”. The problem remains that as long as you define what is going on as pure acts of criminality, the method you use to combat or address the violence will not be effective or sustainable. As long as we define what is going on in this country as “just criminal acts” the issue of Xenophobia will only worsen.

To me, as a child of a foreigner born in this country, but yet proud of my heritage and my language, liberation is a lie. In South Africa, I am not free.

Kwame Nkrumah, the father of African independence, once said:

“Freedom is not something one can bestow on another as a gift: they claim it as their own and none can keep it from them.” Yet many years later, so many of us are not free in Africa.

For decades, those who took power from the colonialists have exploited Africans and failed to protect our resources, causing civil wars, unemployment and poverty. They have looted and condemned our beautiful countries to survive on foreign aid. Many Africans have died — in South Africa, in trying to cross the Mediterranean, as well as in the mines in the DRC. Too many children in the Ivory Coast will perish for the sake of Swiss chocolate and too many die on the streets of Harare because they can’t afford basic medication.

Foreigners don’t run to another country because it’s a luxury, they run because they desperately want a chance at survival. Why, my brothers and sisters, is that so difficult to understand? When shall we reach a point at which we recognise that the borders which exist between our countries are the very same borders enforced by the colonisers, specifically for the purposes of exploiting the African people, because they knew that together we were a power to be reckoned with?

Of course, I am no longer 11 and naïve, I am aware that borders serve a purpose and we can’t allow an influx of people into the country illegally. I question though, whether the solution is to cause so much fear, pain and kill those that then cross into our country? Sixty “foreign” people were killed in 2008 and since then more have had their property destroyed and been brutally killed. Has the number of African foreigners coming to South Africa decreased because of these “pure acts of criminality”?

It breaks my heart that our struggle for liberation as a people is far from over. The fundamental value that binds us as Africans is ubuntu; that “you are who you are because of other people”. Without the rest of Africa, Namibia, Zimbabwe, South Africa would have struggled to achieve the independence that we have today.

What then is the ideal way forward? To suggest that we open our borders knowing full well that Africa doesn’t have the necessary stability or infrastructural capability would be naïve. However, it is intrinsic to the process of liberating our people and their mindsets that we recognise that corruption and poor leadership and governance are what has brought us to where we are today.

Ask yourselves honestly: would South Africa be experiencing an outbreak of Afrophobia if unemployment was at a record low, if our law enforcement mechanisms were able to deal with the real criminal elements effectively and purposefully, and if the pockets of our police force were not lined with bribes? Or better yet, if the criteria for entrance into South Africa was not how much the Home Affairs official on duty was willing to take as a bribe? Would attacks of this nature continue if we were not looking for voter support?

I am beyond certain that the number of Africans not living in their home country would be exponentially smaller if African leaders didn’t fail their people by allowing their own need for social, political and economic power to exceed that of their need to emancipate the people. A popular proverb in South Africa is, “the bull is among the calves.” Let us apportion blame where it belongs.

At 15 I have begun to ask myself where I actually belong.

I was born and bred in Johannesburg, I know no other home, and I don’t identify with any other nationality. Yet, I know this can no longer be my home, I am not safe in South Africa, my future in a country which I love and know like the back of my hand is uncertain. I might be killed if I am in the wrong place at the wrong time merely because I am labelled a foreigner. I will always be a kwere kwere, an outsider, and when the community leaders instruct the communities to hunt down foreigners, I stand no chance.

I am a victim of leaders who refuse to understand my predicament, who refuse to take a stand on Afrophobia, hiding behind technicalities such as calling the phenomenon, “pure criminality”.

Many of my African foreign brethren are victims of the likes of Emmerson Mnangagwa, who has failed to rid his country of poverty and has reduced his countrymen and women to beggars and victims, all while he splashes out on funerals of dictators and himself.

If the bull is truly among the calves, the only prophecy one can give on Africa is that more will die very cruel, unnecessary deaths — and this is just the beginning. Africa will never unite because our young people are being groomed to hate their own brothers and sisters. You are asking me to accept that for as long as our leadership continues to play games with people’s lives, I will never be accepted and I must accept that for as long as I am in South Africa, I can die at any time, all because according to leaders and their communities, I am a foreigner and therefore do not deserve to live.

Ultimately we must recognise the humanity of African refugees.

They do not run because running is easy.

Africans run because the ghosts of poor leadership, corruption and greed are chasing them.

Africans cry because the rain hasn’t touched the ground for years and they are trying to feed their families with tears.

Africans bleed, because red is the colour of our fallen brothers and sisters, and they are still suffering.

Before giving power to the people, we must give the people humanity. We as Africans cannot facilitate the genocide of other Africans. We as leaders must take responsibility; have you got enough blood on your hands? We as journalists must stop fuelling the seeds of hatred by failing to report in a responsible manner which protects everyone in our borders.