While focusing on the EFF, we ignore the ANC at our peril 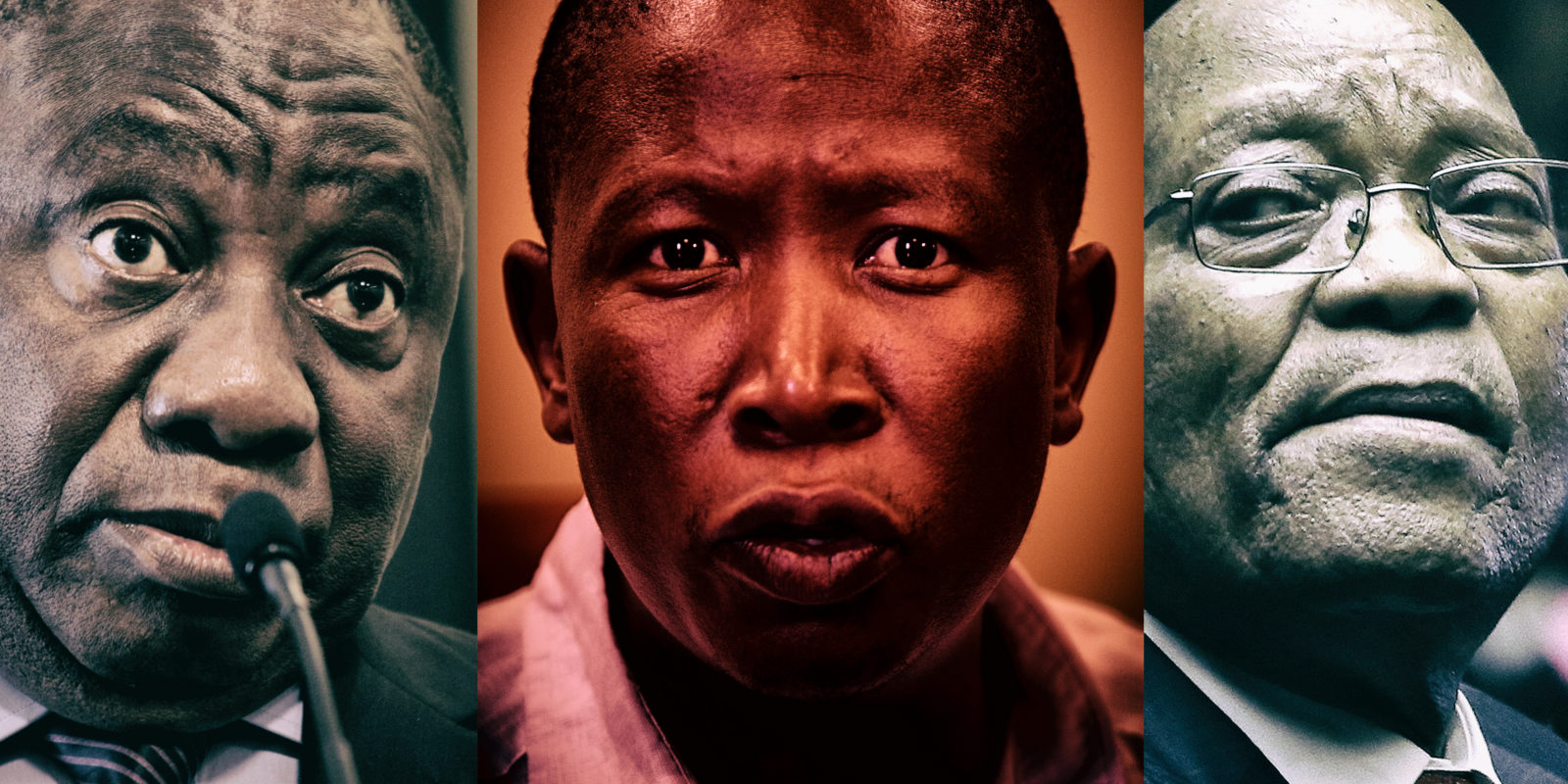 The very people, the party, the ANC and its allies who brought us to where we are, are still with us. Concerned citizens should not be lulled into some kind of utopian wonderland, with attendant imaginings that ‘we have now diagnosed the problem’ so let’s get on with things. That is just wrongheaded — and dangerous.

The ANC, the liberation movement or political party — whatever it wishes to call itself these days — has been gaining any number of propaganda windfalls over the past couple of years.

Thanks, mainly, to the Economic Freedom Fighters (EFF), there is a sense that all is well with “the people who liberated South Africa” with “the party of Nelson Mandela, Oliver Tambo and Walter Sisulu”, and the only and biggest problem is Julius Malema with his thugee and their performance politics.

It’s worth remembering that the ANC and its allies are still with us — many of those who have questions to answer are hiding in plain sight.

The EFF, AfriForum, Steve Hofmeyr, systemic lawlessness, brutal gender-based violence and a general breakdown of relations between black and white people, between English and Afrikaans-speaking people, (oh, and Donald Trump, Boris Johnson and the corpse of Robert Mugabe) have turned the spotlight away from the ANC.

This “refocus” is helped, in no small measure, by the leadership of Cyril Ramaphosa who is, relatively, closer to a Mandela than to whatever it was that presented itself as “leadership” of the past decade or so. We can debate that some other time.

In short, and an apology is necessary for the cliché (it’s probably uncool to quote Kevin Spacey, even as Keyser Söze/Verbal Kint), but the great French thinker Charles Baudelaire once wrote: “Never forget, when you hear the progress of wisdom vaunted, that the cleverest ruse of the Devil is to persuade you he does not exist!”

Here were are, then. Forget the talk of “progress” of “wisdom” — we sure do know a lot more about the lack of progress the country has made over the past decade — the people, the party, the ANC, who brought us to where we are, are still with us. Concerned citizens should not be lulled into some kind of utopian wonderland, with attendant imaginaries that “we have now diagnosed the problem” so let’s get on with things. That is just wrongheaded — and dangerous, mind you.

The same ANC that mismanaged the country, virtually destroyed the public broadcaster, reduced the energy generator to no more than the occasional electrical spark and left the body of the national rail, health and education systems in a state of marasmus.

It’s not always appropriate to use Spencerian analyses (Herbert Spencer believed society was like a living organism) to explain social phenomena, but I can’t find a better word than marasmus: a state of extreme malnutrition, infection and teetering on the edge of collapse.

Look at state institutions and agencies. Look at the state of education (and the students who graduate), and consider the fact that South Africa has one of the worst education systems in the world. And here is the kicker. Very many of the people who run state agencies and who are responsible for health and education — most notably the trade unions — continue to benefit from their alliance with the ruling ANC.

To understand the scale of ignorance of the fainéant fools employed by the ANC, and who have given the word “structures” a very bad name (I should apologise in advance for revealing this), one of the people who served on Robben Island with Nelson Mandela, (Ahmad Kathrada) was once (a couple of years before he died) denied access to ANC headquarters because nobody could identify him, and he did not have an appointment. They asked around, and nobody had heard of Kathrada.

There is reason to be optimistic about the likelihood of arrests, but optimism can swiftly turn to despair. Let’s do a speculative exercise and state up front, that these people are all innocent until proven otherwise. Some of them are misunderstood and really quite decent people. Starting at the top. Remember, this is the ANC — the people who “liberated South Africa” and who would insist there is a sliding scale of justice and freedom where “those who fought for freedom have a greater claim to freedom”.

At the very top of this organisation is Ace “Innocent Until Proven Guilty” Magashule, who has been implicated in the creation and maintenance of a gangster state, and whose most loyal followers have burnt books, thereby channelling Nazis and supporters of Latin American dictators. His deputy, Jessie Duarte, admitted that her son-in-law had made a mistake in joining the office of Des van Rooyen, who kept the Finance Ministry seat warm for four days in December 2015.

Then let’s turn to Mosebenzi “Innocent Until Proven Guilty and/or all Appeal Options are Exhausted” Zwane who has been dubbed “the most captured Cabinet Minister”.

Now let us consider the current Minister of Women Youth and Persons with Disabilities, Maite Nkoana-Mashabane. When she was minister of international relations and co-operation Nkoana-Mashabane presided over the decline of South Africa’s moral authority (as a political resource) around the world.

She was also an important player in the process of appointing diplomats to foreign posts after being found with their fingers in the cookie jar. She was also in charge when diplomats mysteriously disappeared for extended periods, and when South African properties abroad descended into disgusting disrepair.

These are all kept under wraps… Most recently Corruption Watch launched a fierce attack on Nkoana-Mashabane, accusing her of “abusing and weaponising” disciplinary processes in order to facilitate corruption when she was minister of rural development and land reform.

Let’s go down the pecking order. Consider Lindiwe Zulu, Minister of Small Business since May 2014. Here’s a challenge. Somebody should ask the minister how the numbers of small businesses has changed over the past five years of her tenure — whether it has increased or decreased. We can run through one government department and agency after the other, and with the exception of National Treasury, the fainéance is astonishing.

And guess what? ALL of the people mentioned above — including convicted criminals such as Tony Yengeni and Andile Lungisa, and others up and down the country (people such as Karl Niehaus, Des van Rooyen, Bathabile Dlamini, David Mahlobo, Jacob Zuma, and many, many more) — are all part of the ANC, and they are not going anywhere. They are the ANC.

There’s an expression I learnt in Sicily, and which I have used in this space before:

You cannot arrest one person for something
that everyone in the village is doing.

In short, you may have to gut the ANC almost entirely. And that will not happen. What makes things worse is that the ANC’s original policy objectives remain fairly intact.

The otherwise noble policy of affirmative action and black economic empowerment had the (intended or unintended) consequence of creating a scheme that became a feeding trough, based on a sliding scale of justice where the “blacker” or “more disadvantaged” you were, previously, the larger the largesse and the greater your access to power and privilege.

Just for good measure, this is the ANC that has a “national question” which considers “coloured” people to be over-concentrated in the Western Cape, and people of Indian heritage to be over-represented in KwaZulu-Natal. In terms of the latter, this is the ANC that will encourage a type of “forced busing” of people to make sure “Africans” make up the majority in places where “non-Africans” have historically been concentrated.

Let us wrap up this argument. The ANC that has brought us to where we are is alive and well. The ANC that has presided over the virtual destruction of the state, of agencies and institutions remains in place and in power — for the most part.

While everyone is worried and in a state of panic over the EFF — as well they should — based on the evidence of the past 25 years, the ANC is probably a greater danger to the country than Malema’s performance populists. They may turn out to be an epiphenomenon of a country that is angry with the ANC.

Back when I was a child, we had a funny word for a firecracker that did not explode: it was called a “tjoerkie”.

The EFF may turn out to be just that. The ANC may be the bigger problem. DM