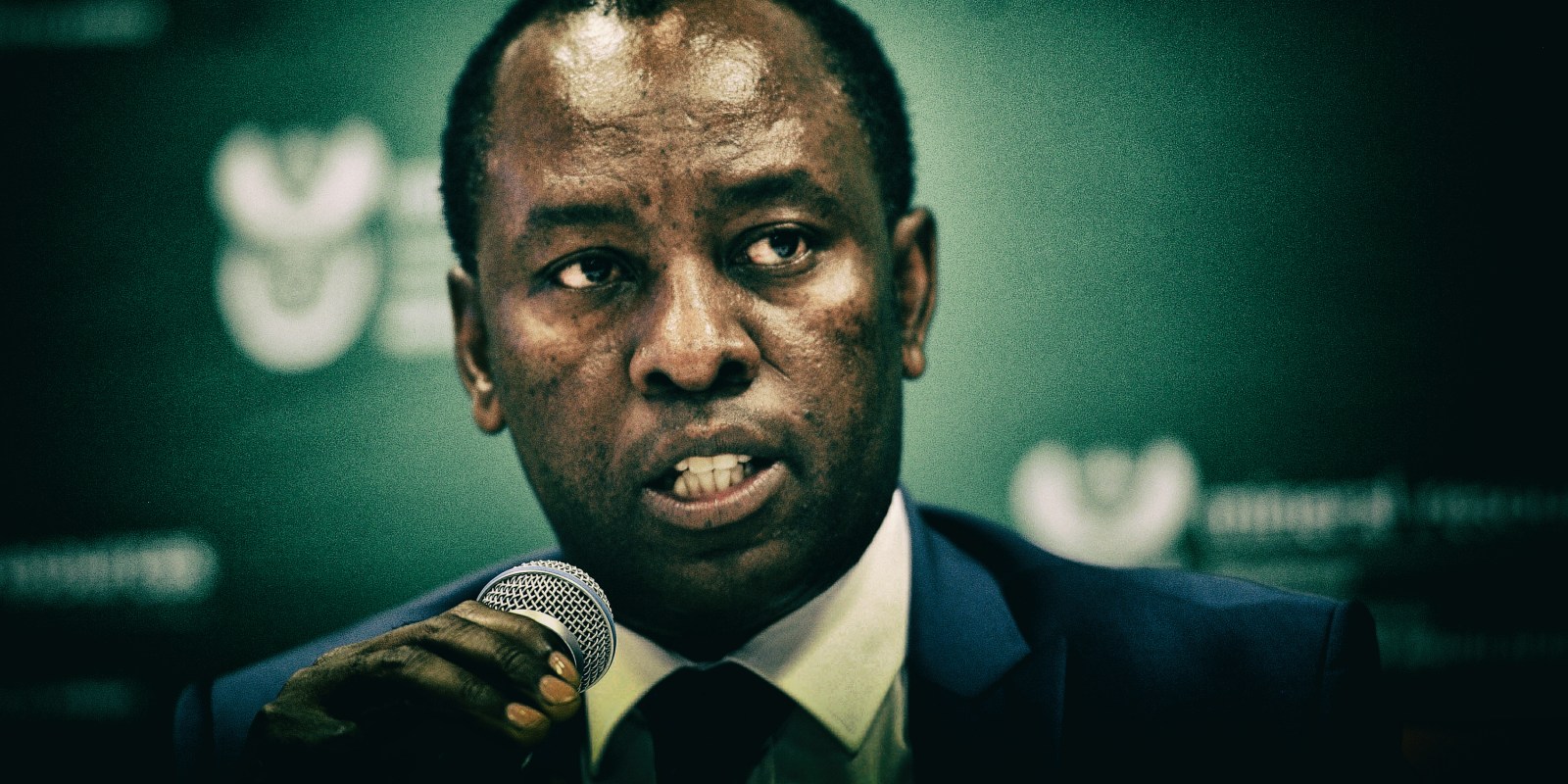 Then Mineral Resources Minister Mosebenzi Zwane addresses the media during the release of the 2016 health and safety statistics in the mining sector on January 19, 2017 in Randfontein, South Africa. Photo by Gallo Images / Sowetan / Veli Nhlapo

Mosebenzi Zwane, former mineral resources minister, effectively acted as a direct emissary in former president Jacob Zuma’s Cabinet for the Gupta family, the Zondo Commission heard on Monday, as Standard Bank’s former group general counsel Ian Sinton appeared to explain why it had shuttered the Guptas’ banking facilities in 2016. The latest revelations of how Zwane operated almost solely to fix for the Guptas show, how he attempted to bully the banks and shook down the commodities trader Glencore when the Guptas wanted to buy its Optimum coal mine.

In addition, he threatened the bank with legislation which would disallow it from closing accounts, a practice unheard of in modern economies with credible banking systems.

Zwane effectively acted as a direct emissary in former president Jacob Zuma’s cabinet for the Gupta family, the commission heard on Monday, as Standard Bank’s former group general counsel Ian Sinton appeared to explain why it had shuttered the Guptas’ banking facilities in 2016. Numerous reports show he helped the family build its empire when he was a provincial politician and then later as a national politician too.

The Guptas engaged a public relations strategy managed by the global PR company, Bell Pottinger, to try to force the big four banks to reinstate the accounts which were closed as media revelations revealed their web of apparently corrupt activities. This took Standard Bank by surprise.

“A banker-client relationship can be unilaterally terminated. It’s not a judicial or administrative function,” said Sinton, who added:

“There’s no reason required on behalf of the banks to give reasons on why you are terminating a relationship.”

In addition to the PR blitz, the Guptas used their political clout to bring pressure to bear on Standard Bank, revealed Sinton, who told Deputy Chief Justice Raymond Zondo about a meeting with the governing ANC and with an inter-ministerial committee, chaired by Zwane, where he made the threats to change South Africa’s highly regarded banking regulatory regime.

The latest revelations of how Zwane operated almost solely to fix for the Guptas suggest that he could very well have earned the surname “Gupta”. In addition to bullying the banks, Zwane also shook down the commodities trader Glencore when the Guptas wanted to buy its Optimum coal mine.

The #GuptaLeaks emails showed how he travelled to Switzerland on the family’s jet, ZS-OAK, to Baar in Switzerland where he apparently strong-armed Glencore’s Ivan Glasenberg into selling the Mpumalanga mine to the Guptas’ Tegeta. The family wanted to buy up coal assets in order to work supply chains into the electricity utility Eskom, which it had also captured. From there, its fortunes were calculated to multiply by billions.

Zwane was also the Free State politician who paid over R200-million to the Estina dairy project, one of the family’s first forays into provincial capture. The project in Vrede sucked resources from local black farmers and communities who were meant to benefit and it never became the development centre Zwane had promised.

Instead, the funds have been shown to have passed almost directly to the Guptas and have been traced to those used to pay for the bling Bollywood family wedding at Sun City in 2013, where they flew in a plane-load of the family from India to show how well they had done in South Africa.

The Gupta family arrived in South Africa as small-time traders in 1993 but now preside over a multinational empire worth billions regarded as largely looted from South Africa and from contractors with the South African state. Zwane sits at the centre of the enterprise as an enabler, fixer and a “heavy”, as this week’s evidence revealed.

Sinton, on Monday, for the first time revealed details of an inter-ministerial committee meeting Zwane summonsed Standard Bank executives to attend late in 2016.

“The meeting was an attempt by two Cabinet ministers on behalf of Cabinet to persuade us to retract our decision to close the Gupta family accounts. There was no other reason for the meeting,” said Sinton.

At Zuma’s instruction, the committee was set up to probe why the Guptas’ accounts had been closed by all four major banks. This committee threatened to set up a judicial commission of inquiry into why the Guptas’ bank accounts were closed, but Zuma issued a damning indictment of this threat after a Cabinet uproar against it in 2016.

Prior to this, Zuma had insisted that former finance minister Pravin Gordhan form part of the committee, but he refused to attend any meetings. Standard Bank met instead with Zwane, Labour Minister Mildred Oliphant and Mzwanele Manyi who attended, he said, as an adviser. Manyi was at the time an adviser to then communications minister Faith Muthambi, so it’s not clear why he attended this meeting, although his cosy relationship with the Gupta family is well-documented.

At the end of the meeting, Zwane warned the bank that he had the power to pass legislation to take away the banking sector’s right to close accounts, an unprecedented threat to the global norm of how banks work. He also issued a veiled warning to Standard Bank’s gathered executives, saying that government was responsible for the bank’s licence (and, presumably, could take it away). South African banks are regulated by the SA Reserve Bank, a fact which Zwane did not seem to know.

Zwane hails from the Free State where he was an activist in the Eighties. He has been the regional chairperson of the Thabo Mofutsanyana region since 2006 and is close to ANC Secretary-General Ace Magashule.

The politician has said he enjoys Dubai, where the leaked emails revealed he had often visited. He also enjoyed Gupta family largesse at the famed Oberoi Hotel to which the family took guests it was seeking to ensnare in its network of corruption.

Zwane has consistently denied his links to the Gupta family and is alleged to have lied to Parliament when he replied to questions in 2015, saying he had never met the family.

Asked about his role in the Estina dairy project and how it had directly enriched the Guptas, Zwane earlier this year told eNCA: