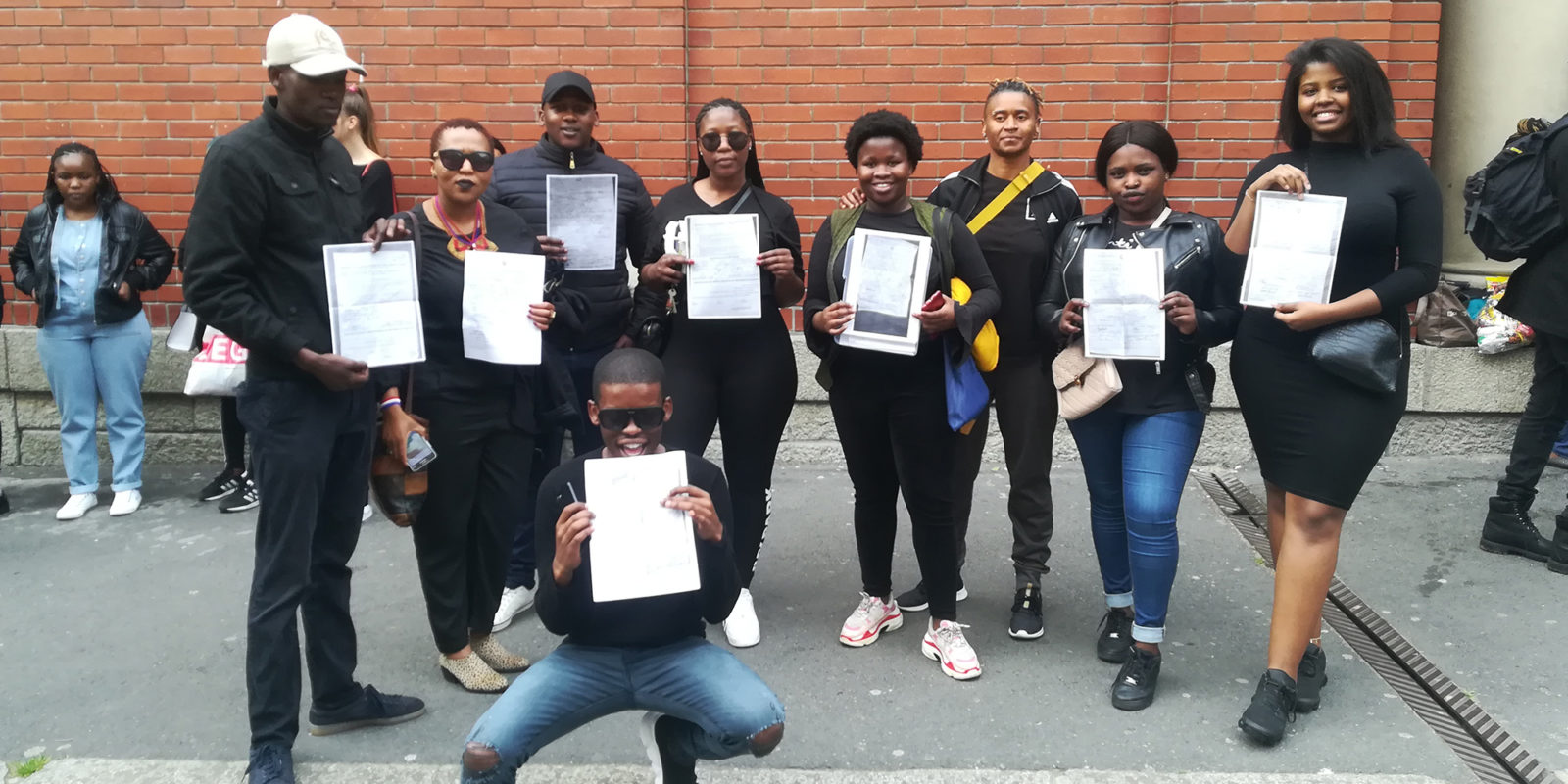 Nine of the 11 protesters arrested on 4 September for contravening the Regulation of Gatherings Act during a protest against gender based violence hold up photocopies of their nullified charge sheets. Photo: Tessa Knight

‘The charges didn’t make any sense. We were held in police custody for 11-plus hours, cold, hungry, terrified and traumatised.’

Eleven protesters against gender-based violence, ranging in age from 19 to 47, were arrested under the 1993 Regulation of Gatherings Act during chaotic disruptions last week. But it seems unlikely they will be prosecuted, after the State declined to place the matter on the court roll.

The 11 were among thousands who took to the streets following the rape and murder of Uyinene Mrwetyana, the murder of Jesse Hess and the brutalisation of countless other women across South Africa.

“I was once violated, so I know how it feels. So for me it meant that I needed to stand up for young women, for all women in South Africa,” Cape Peninsula University of Technology (CPUT) student Wendy Kebe told Daily Maverick outside court in Cape Town on Monday 9 September.

“The charges didn’t make any sense. We were held in police custody for 11-plus hours, cold, hungry, terrified and traumatised,” said Ukhona Ntsali Mlandu, who was arrested alongside Kebe. “I’m traumatised, I’m angry and I’m hugely disappointed that our state could do this to women, youth and minority genders at a time like this.”

In the case of the 11 protesters arrested on 4 September, prosecutor David Jacobs chose not to place the matter on the court roll. According to Seeham Samaai of the Women’s Legal Centre, who represented the majority of those arrested throughout the week, a null prosecution means the prosecutor found there was not enough evidence to prosecute.

Speaking to Daily Maverick, members of the group claimed their charges were not explained to them while being arrested, and they were only told what was happening when they sent out a call for assistance on social media.

Sakhile Arosi said he was the only person of the group kept in a holding cell after everyone was arrested. When his parents came looking for him, officers told them he had been released. After his mother complained, Arosi told Daily Maverick, officers “came back to my parents saying that they had forgotten I was there”.

The 10 other people arrested could have left before Arosi, who was charged with contravening the Regulation of Gatherings Act claims he was originally told he would be charged with public violence. In solidarity, the group of 11 chose only to leave when all of their releases had been fully processed.

According to Samaai, the 11 were charged under section 12(1)(G)(J) of the Regulation of Gatherings Act (RGA) of 1993 which she describes as “exceptionally broad”.

In November 2018, the Constitutional Court ruled Section 12(1)(a) of the RGA unconstitutional. The landmark ruling found that it was constitutionally invalid to criminalise groups of more than 15 people who participate in a protest without giving prior notice. But other sections of the act are still constitutionally valid today, and, according to Stanley Malematja, attorney for the Right2Protest Project, these sections are frequently used as a means for police to arrest protesters.

“The RGA gives unfettered power to the police to dictate how people must protest. They can come in and say, ‘don’t cross this road, go to that road’, which overrides Section 17 of the Constitution,” Malematja told Daily Maverick.

Section 17 states everyone has the right to protest, if they are peaceful and unarmed. Manakaza Xhobani, one of the 11 arrested, told Daily Maverick he came to the protest in solidarity, unarmed, to add his voice to the collective shout for change.

“In any protest, the idea is to disrupt the status quo at that time. As things stand, the act leaves the application of the act to the discretion of the police. It assumes a one-sided story that the police can charge any protester with having prevented the police from conducting their duties.”

Those arrested emphasised that the fight against gender-based violence would continue, regardless of how police treat protesters.

“This movement is bigger than all of us. It’s bigger than me, and it’s bigger than my arrest. The fight continues, because even this past weekend there were murders and rapes,” said 19-year-old University of Cape Town student Ayabulela Caeci, who had to attend university after going to court.

“The police arresting protesters instead of rapists this week says a lot about the society we live in.”

Another group of protesters, who were arrested on 5 September, are set to appear in court on Wednesday 11 September on charges of public violence and assaulting police officers. Samaai told Daily Maverick she is aiming for a similar outcome for those cases.

Will Bendix and Alan Van Gysen
Save 5 mins