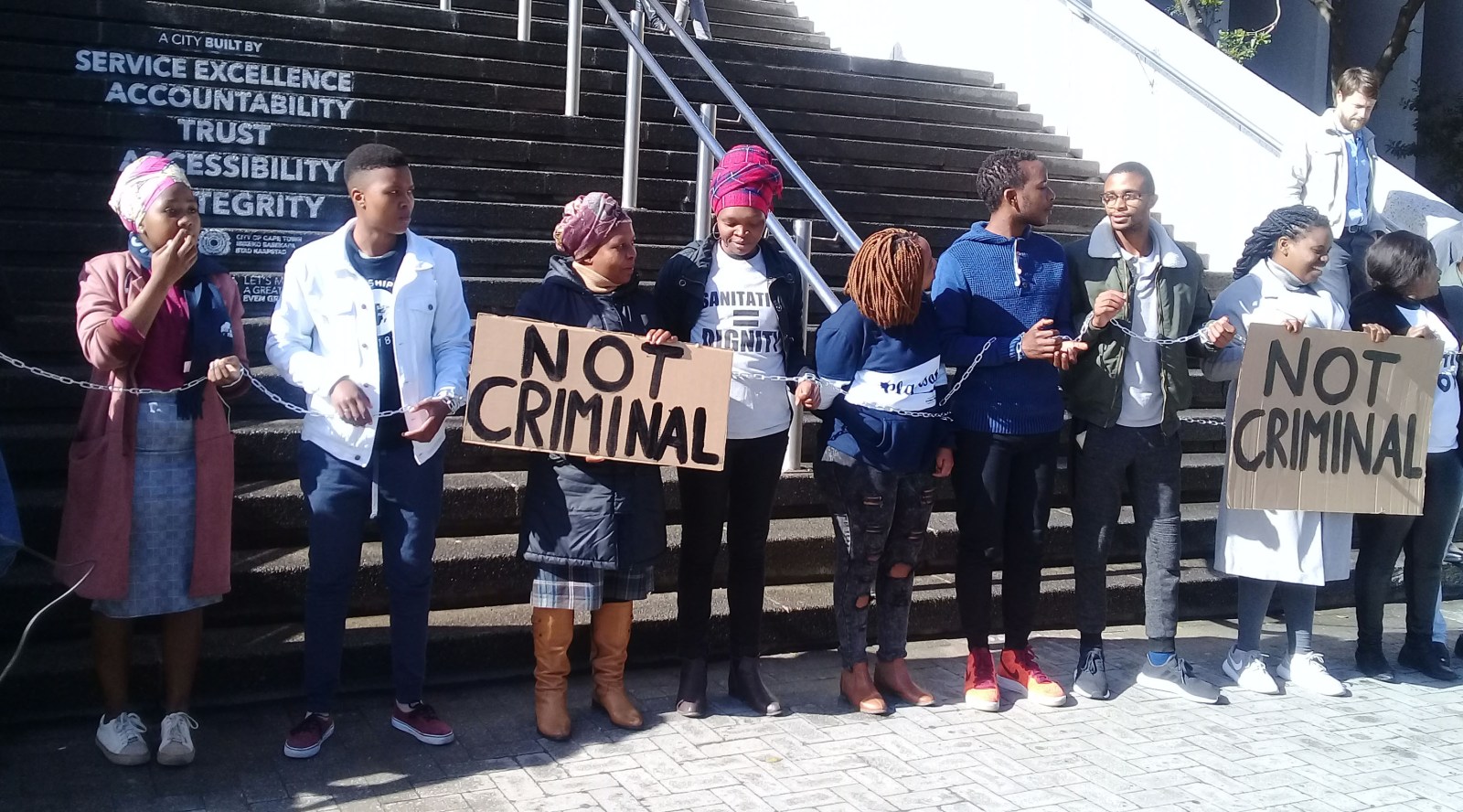 The Constitutional Court ruled on Monday that it is unlawful and unconstitutional to criminalise public protests of more than 15 people and vindicated the #SJC10 after a long court battle to assert their right to assemble.

On 19 November, the Constitutional Court ruled that it was constitutionally invalid to criminalise those who convene a public protest of more than 15 people without giving prior notice.

The judgment thus sets aside the conviction of members of the #SJC10 who were arrested and tried for taking part in a public protest in Cape Town in 2013.

“It is a good relief to not have a criminal record,” commented Phumeza Mlungwana, who was among the group of #SJC protesters.

For Mlungwana, for this judgment to have been made by the highest court, means that for “everyone else who would have been deterred by the fear of a criminal record for protesting for their rights, that little fear has been removed”.

It is also a major win for social movements who use protests as a means of dissent to advance their struggles, said Thami Nkosi, a campaign organiser for Right to Know (R2K) which was a friend to the court.

“We feel dissent is a critical component in a functioning democracy, so we felt it would be an undoing if the minister of police won the case and tried to trample down dissent using a ludacrious and draconian law like the RGA,” said Nkosi.

The court battle began after the 2013 protest with the Social Justice Coalition, a social movement that seeks to advance the constitutional rights of people in informal settlements, challenging convictions under what are constituted as illegal gatherings or unlawful protests.

When the #SJC10 held a protest outside the Cape Town Civic centre demanding better service delivery for the people of Khayelitsha, they were arrested and later found guilty in a magistrate’s court for contravening section 12(1)(a) of the Regulations of Gatherings Act 205 0f 1993 (RGA).

The act made it unlawful for more than 15 people to convene a public protest gathering without giving prior notice to the police.

In a protest in August this year, #SJC10 activists re-anacted the demonstration that saw them arrested.

The SJC argued that some sections of the RGA are regressive because the RGA was passed in the apartheid era. SJC argued that the act should be challenged in democratic South Africa to protect people’s rights to assembly and peaceful protest, especially the poor.

According to Justice Xola Petse who read out the judgment, “criminalising the failure of a gathering to give notice of an assembly of more than 15 people limits the right to assemble peacefully and unarmed, which is entrenched in Section 17 of the Consitution”.

And although criminalising is a way to deter unlawful and violent protests, as previously argued by the state, it inevitably “deters the exercise of the right to assemble, and deterrence by its very nature limits the exercise of this right”.

Furthermore, the ConCourt held that the severe limitation to the right to assemble is unjustifiable.

The state had initially argued that the purpose of “criminalising the failure to give notice” was to “ensure that municipalities and the police can adequately prepare for large assemblies and in doing so reduce violence”.

However, the ConCourt remarked that these “heavy-handed countermeasures” have far-reaching consequences and “unduly limit the right to assemble peacefully and unarmed”, especially for children, who do not enjoy the right to vote but can only participate in their civic duty by protesting.

And by having a broad definition of “gathering” and “conveners” in the act, those who participate in a peaceful protest of “more than 15 people prosecution easily be criminalised for failing to give notice”.

The ConCourt held that “there are less restrictive mean declarations to of incentivising conveners to give notice of large assemblies” than a criminal prosectution of citizens enjoying their constitutional rights.

Justice Petse went on to caution that the “delaration of constitutional invalidity” must not be understood as a way to encourage unlawful and violent protests, as those who convene and participate in a gathering intending to act violently forfeit their right.

According to the judgment, the declaration of invalidity of section (2)(1) of the Regulations of Gatherings Act will not affect finalised criminal trails and those which the review and appeal proceedings have been concluded.

For Axolile Notywala,the Secretary-General of SJC, this judgment “now guarantees, practically, the right to protest, for people who have been criminalised and targeted for peaceful protesting — especially the poor and working class communities, who have not been heard for a long time, and use protest as the only way to get their voices to be heard”. DM