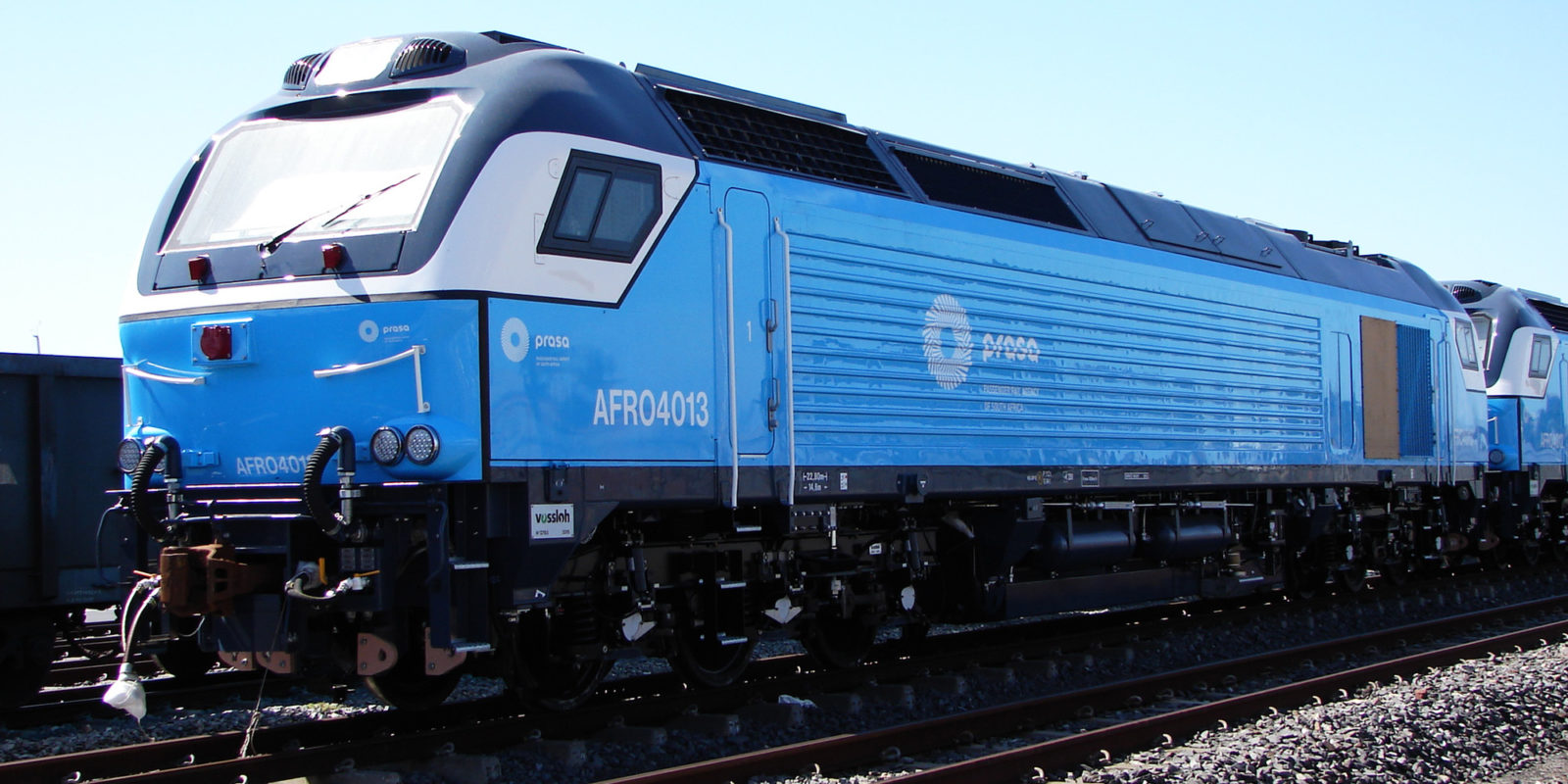 In mid-2015, after some of the Afro4000s had already been shipped to South Africa, it was revealed in Rapport newspaper that the locomotives were too tall for South Africa’s rail specifications. Photo: Wikicommons/Col André Kritzinger

The director of the now-liquidated front company that imported unsuitable locomotives to SA has launched a fresh legal bid to avoid being held financially liable for the ill-fated transaction. The trains formed part of a R3.5-billion deal that was labelled as corrupt in two consecutive court rulings.

In a new court application lodged at the end of August, Auswell Mashaba, the director of the front company Swifambo Rail Leasing, is seeking a declaratory order that would allow his liquidated company to avoid a huge claim of just over R2.6-billion from the Passenger Rail Agency of South Africa (Prasa).

Mashaba also wants the North Gauteng High Court in Pretoria to grant him a declaratory order that would prohibit the liquidators of Swifambo to treat 13 Afro4000 locomotives as assets of the liquidated company.

An auction for the Afro4000s kicked off at the start of September, the proceeds of which are to be used by Swifambo’s liquidators to help settle several claims against the company. But Mashaba followed up his initial application with an urgent application through which he wants to stall the auction until the court has ruled on the main case.

In the main application, Mashaba somewhat bizarrely relies on two scathing court judgments on the locomotives scandal to argue that Prasa shouldn’t seek restitution of the R2.6-billion it splurged on the deal from Swifambo. Mashaba instead wants Prasa to direct any claim it might have at Vossloh España, the European manufacturer Swifambo sub-contracted after it clinched the huge contract in 2013.

The Supreme Court of Appeal (SCA) has ruled that “the involvement of Swifambo took place as a front for Vossloh”, Mashaba concedes in his particulars of claim.

Mashaba also states that: “The real roll [sic] of Swifambo was to enable Vossloh to become the real bidder to the tender which lead [sic] to the contract.”

Mashaba’s interpretation of the SCA ruling is that “there was no change of asset holding between Swifambo and Prasa” and that “Vossloh had complete control over every aspect of the contract for the supply of locomotives.”

Seeing as Swifambo was merely a front for the “real bidder”, namely Vossloh España, “the Plaintiff [Mashaba] contends that the restitution should take place between Prasa and Vossloh,” according to the particulars of claim.

Mashaba furthermore wants the court to issue a declaratory order that would see Prasa return the trains to Vossloh España. It is not clear whether his counsel considered the fact that Vossloh España no longer exists as a corporate entity after it was acquired by Swiss rolling stock manufacturer Stadler Rail in the wake of the tall trains scandal.

Tshwane Trust Co., the firm appointed as Swifambo’s joint liquidator in 2019, decided to put the trains up for sale in an online auction. The auction kicked off at the start of this month and runs until 12 September.

Through his urgent application, Mashaba wants to interdict Tshwane Trust Co. from proceeding with the auction until the main application has been concluded.

In his founding affidavit, the businessman repeats his assertion that Prasa should lodge its R2.6-billion claim with Vossloh España and not Swifambo. He is adamant that this viewpoint is supported by the SCA ruling.

“It is apparent that this opportunistic interpretation by Prasa [that the monies should be claimed from Swifambo] has been implemented for the sake of convenience. The correct position is that Prasa should make its claim for restitution against Vossloh. This, however, would entail engaging one of the largest locomotive or train manufacturers in the world who is based in Europe,” reads the affidavit.

But Mashaba’s court filings make no mention of the fact that Prasa – under the stewardship of then CEO Lucky Montana – paid the R2.6-billion into the accounts of Swifambo and another entity owned by Mashaba, and not to the European manufacturer. (Swifambo, which was barely more than a one-man operation, subcontracted Vossloh España for the supply of 70 locomotives only after it clinched the R3.5-billion Prasa contract in 2013, a fact that partly informed the South Gauteng High Court and SCA’s severe criticism of the deal.)

Mashaba’s claim that the 13 Afro4000s are not the property of Swifambo is “disingenuous”, seeing as Vossloh España delivered the trains to the liquidated company as part of the subcontract between the two entities, according to Muller’s affidavit.

He also points out that the Master of the High Court has accepted Prasa’s claim in the liquidation proceedings and that the restitution process has already been put into motion by Prasa agreeing to hand over the 13 Afro4000s to Swifambo’s liquidators.

Muller believes Mashaba’s latest court application is an attempt to halt an ongoing investigation into the cash flows related to the contentious train deal.

“The money trail clearly indicates that the first applicant [Mashaba] and his entities, inclusive of family members have cyphered [sic] tens of millions of rands, if not hundreds of millions of rands from the insolvent estate and the fourth respondent [Railpro Holdings, Mashaba’s other company] as part of a large scheme to enrich themselves,” reads Muller’s affidavit.

Mashaba’s court bid “is nothing but a strategy to devoid the insolvent estate from assets so as to ensure that the estate will have no further monies to investigate the stripping of the insolvent estate’s equity,” according to the liquidator’s court filings.

The latest court drama comes in the wake of Daily Maverick’s recent revelation that the Jacob Zuma Foundation was among the myriad third parties to whom Mashaba funnelled some of the proceeds of the Prasa deal. Earlier investigations by this reporter showed that Angolan businesswoman Maria Gomes and lawyer George Sabelo, who both have ties to Zuma and his family, received some R80-million from Mashaba after the latter’s companies received payment from Prasa.

Four years have lapsed since the publication of the first reports detailing these suspicious cash flows, but authorities seem no closer to bringing to book those who participated in what may have been one of South Africa’s most audacious corruption schemes.

“The investigations are still ongoing as it is a rather complex matter but we are making progress,” said Hawks spokesperson Hangwani Mulaudzi.

“The National Prosecuting Authority will only decide [on whether anyone will be prosecuted] after finalisation of the investigations by the Directorate for Priority Crime Investigation [the Hawks],” stated NPA spokesperson Bulelwa Makeke. DM

Kirsten Pearson and Steve Kretzmann for GroundUp • 4 hours ago