Mr Fix It, fix the trains, say unions as they march to Parliament 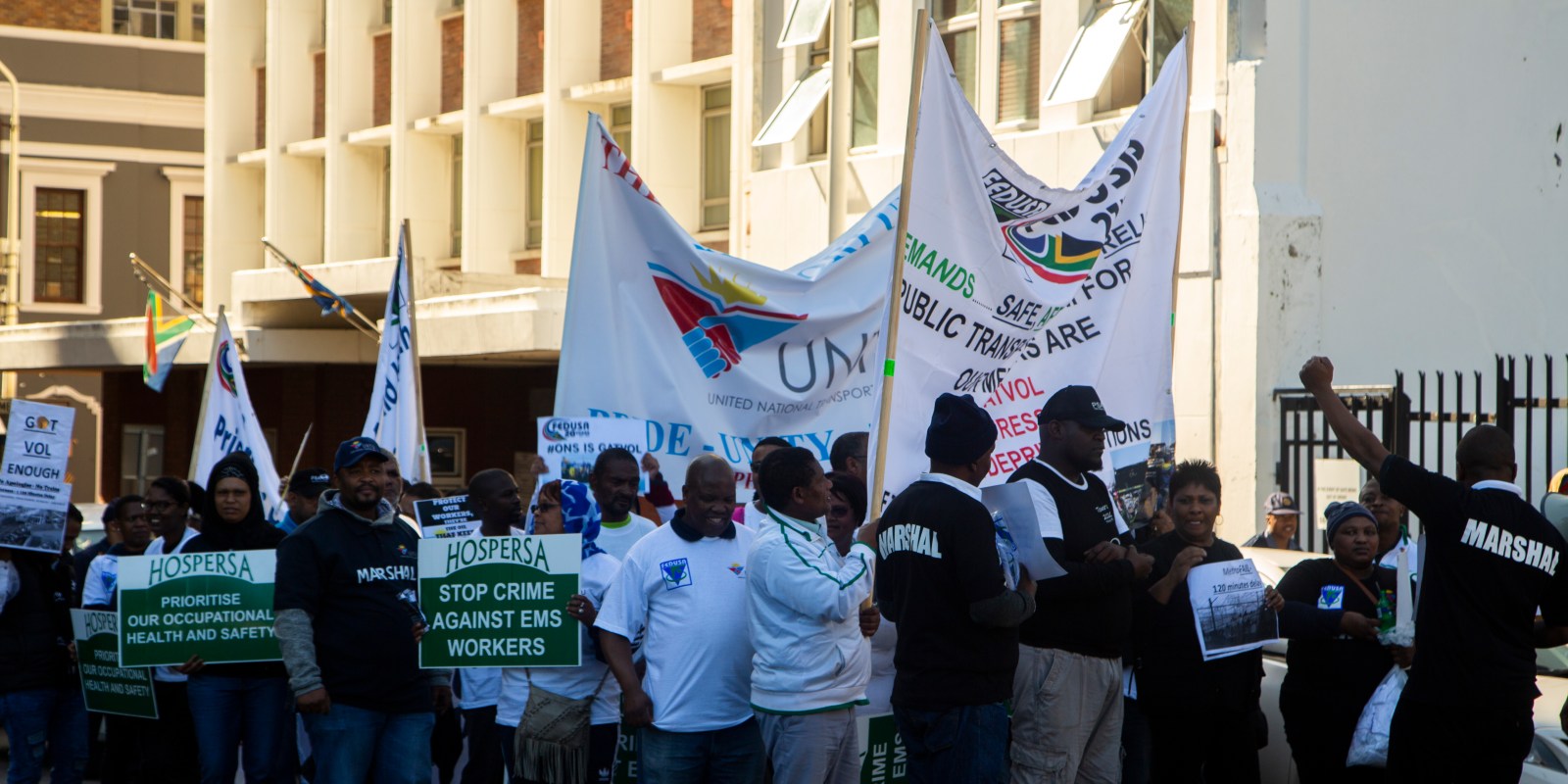 FEDUSA and its affiliate UNTU marched to Parliament on 26 July 2019, calling for the deployment of the army to the railway service. Photo: Aisha Abdool Karim

The deployment of the army to the rail network to ensure safety for commuters and employees of the Passenger Rail Agency of South Africa and for Minister Fikile Mbalula to fix the trains were the demands of unions at Friday’s march to Parliament where Fedusa warned that if these demands were not met within 30 days, they would come back to march again.

The union and its mother body Fedusa held a nationwide one-day strike on Friday to ask for assistance straight from the President to deploy troops to the embattled rail network.

The Fedusa-led strike march in Cape Town was only attended by 40 members, but their message was clear: Mr Fix It, transport minister Fikile Mbalula must fix the train service during his first 100 days in office while the President, as Commander in Chief of the SANDF must deploy personnel to the rail service to stabilise crime on South Africa’s railway network.

Le Roux said that there was no safety and security on trains, stating, “once your infrastructure collapses, there is no service”.

Le Roux stated that was no proper support for Prasa and its problems, and it was “common knowledge of the money that was plundered through Lucky Montana” could have been used for security upgrades at the State-Owned Entity. Due to a lack of security, the union wants the army to stabilise security and crime on the network, then training, as announced by minister Mbalula this week, can commence, le Roux told Daily Maverick.

At Parliament, Riefdah Ajam, Fedusa’s deputy general said: “our people are dying, our people are raped on the railway, our people are assaulted on our railway every day.” Ajam said that not only was the group marching on behalf of more than half a million workers across the country, “but for commuters here in Cape Town”.

In Cape Town, the Passenger Rail Agency of South Africa (Prasa’s) spokesperson Nana Zenani said in a statement: “Western Cape is operating a normal weekday service with minimal cancellations. Some delays due to usual operational challenges including vandalism, manual authorisations and speed restrictions.”

She said the union wants safe, reliable and accessible transport for commuters and drivers. In addition to the SANDF deployment, some of Fedusa and UNTU’s demands are:

At Parliament, the Department of Transport’s chief director responsible for rail, Mkhacani Godfrey Maluleke, told the group “we are going to take your demands seriously” and said the department would get back to the union within 30 days. The 30 days – and the end of Mbalula’s first 100 days in office  – will be around the end of August.

Ajam, however, said if the department does not meet these demands, they would return to Parliament.

Meanwhile, Bheki Simelane reports from Gauteng that Midway Station –  which feeds the rail between Johannesburg and Vereeniging –  was quiet this morning. Commuters who usually travel by train were relying on  taxies. DM