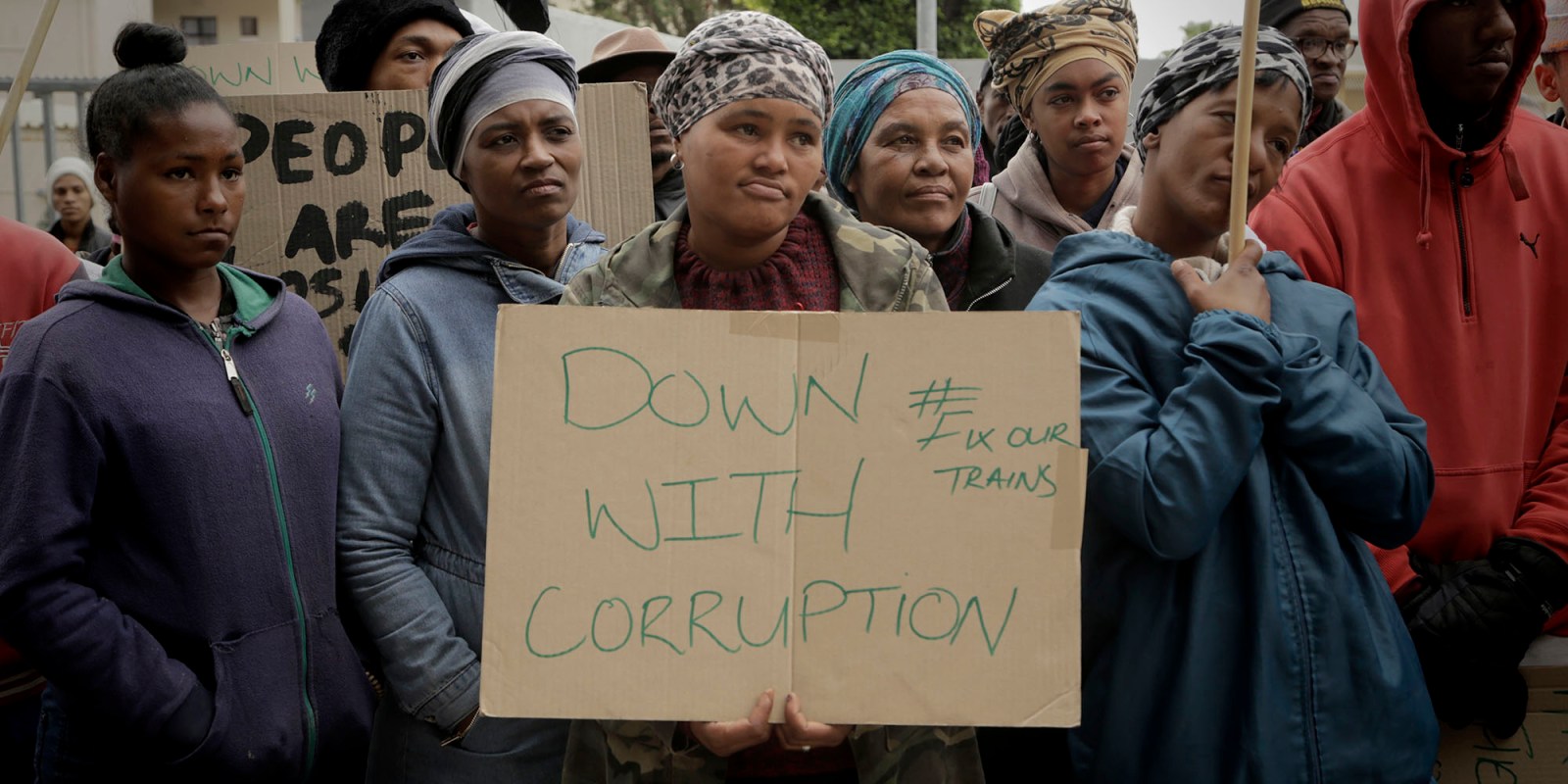 Woman holds placard at the #UniteBehind march outside of the German Consulate. (Photo: Karabo Mafolo)

“The United Nations Convention against Corruption specifically requires state parties to develop and maintain anti-corruption policies. If the corrupt actions of German organisations are allowed to continue at the expense of the South African economy, then Germany has failed in this commitment,” reads the memorandum #UniteBehind handed over to the German Consulate offices in Cape Town on Thursday, 25 July 2019.

The “corrupt actions” they are referring to date back to 2012 when Swifambo, which acted as the middleman for Vossloh Espana, a manufacturing company that has its headquarters in Germany, won a R3.5-billion tender to supply the Passenger Rail Agency of SA (Prasa) with 70 locomotives. Only 13 were delivered as there were problems with the contract. Prasa ended up paying R2.6-billion for the 13 locomotives.

The locomotives that did arrive were too tall for the South African railway systems and could not be used.

#UniteBehind, which has a #FixOurTrains campaign advocating for a better and more efficient train system, organised the march of about 50 people to the German Consulate offices.

“Everything that’s happening at Prasa is because of greed. The reason we’re here is because Prasa is in crisis and we need to start fixing Prasa,” said Zukiswa Vuka, an organiser from #UniteBehind.

In 2017, the Johannesburg High Court ruled that Swifambo was a front for Vossloh Espana. Its contract with Prasa was set aside after the newly-appointed board, led by Popo Molefe, sued Swifambo.

“We’re here for more than Prasa, we’re here because international companies exploit and feed into State Capture. We’re here to ask the German government to assist us against corrupt companies who are as much a danger to Germany and to Europe as they are to us,” said social justice activist Zackie Achmat.

After the 2017 High Court ruling, Swifambo tried to get that decision overturned by going to the Supreme Court of Appeal (SCA). In 2018 its application was dismissed. Shortly after the SCA ruling, Swifambo went into liquidation.

“You can’t have corruption without having someone who pays; they’re assisted by people in our government,” Achmat told the crowd.

The too-tall trains will be auctioned off in September. On Wednesday, 24 July 2019, Minister of Transport Fikile Mbalula told a press conference the auctioning of the locomotives “marks the end of a painful episode for Prasa, where a significant investment aimed at improving the Shosholoza Meyl service was corrupted by unscrupulous people whose interest was to line their own pockets… corruption and criminality will not go unpunished. In this regard, I expect the board of Prasa to urgently litigate to recover public funds from those it was paid to.” DM