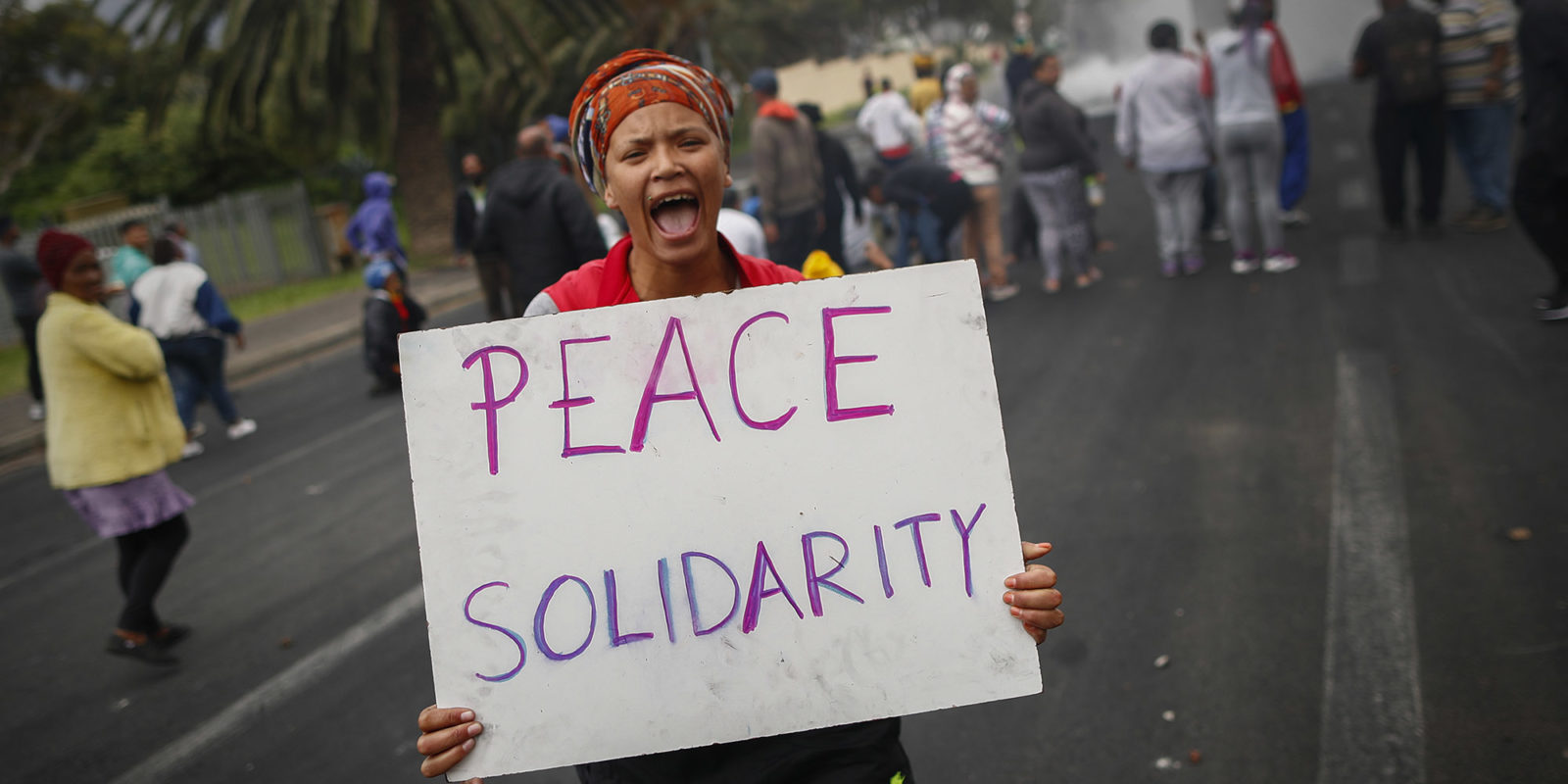 Residents of Ocean View, Cape Town, blockade Kommetjie Road in protest against the lack of policing in their area. (Photo: EPA-EFE / Nic Bothma)

On the Cape Flats there exists a boiling pot of crime, gangsterism and drugs, against an enabling backdrop of a corrupt state. Daily Maverick spoke to Simone Haysom, senior analyst for the Global Initiative Against Transnational Organised Crime, about the decision to send in the military to tackle the problem.

“You don’t run a major criminal organisation in South Africa without state protection.”

So said Simone Haysom, author of The Last Words of Rowan du Preez: Murder and Conspiracy on the Cape Flats and senior analyst for the Global Initiative in a 16 July interview with Daily Maverick.

Haysom, who focuses her research on corruption and organised crime, told Daily Maverick that gangsterism is fuelled by corruption at all levels, from patrolling police officers stopping to pick up small bribes from gangsters to high-level officials becoming co-opted by gangs.

These corrupt officers and officials then offer protection to gangs and gang members, often in return for untraceable cash made from selling drugs and other illegal items.

Issues of gang-related violence came to a tipping point over the weekend of 6 and 7 July 2019, when 13 people were killed in Philippi East and Hanover Park. Residents called on Police Minister Bheki Cele to come up with an immediate solution to the crisis of gang-related crime and violence on the Cape Flats after two days of death.

In response, Cele, with presidential permission, asked the SANDF to operate in the area for three months. According to Haysom, it was “quite clear SANDF was taken by surprise” at Cele’s announcement.

The defence force’s mandate for operations within the area does not appear very clear, she said. Other than a call for disarmament and increased state presence, as well as a proposed three-month deployment, when the army will physically begin patrolling is not known.

According to Haysom, gangsters on the Cape Flats do not stockpile weapons as gangsters in movies do.

“Guns are stored in the community. They’re often given to children and girlfriends to hide in homes and the military will require intelligence to find out which homes the guns are stored in.”

Besides, the SANDF has lost the element of surprise that may have helped in disarming gangs.

“The military is a blunt tool in the context of the complex issues we’re talking about, but we don’t know what their mandate is. They might just be positioned on street corners and told to stand there; we don’t know.”

Despite a lack of clarity around the military deployment, Haysom knows one thing is certain: The situation on the Cape Flats warrants serious action.

“Gangsterism is a national issue, but Cape Town still has the worst situation. It has the largest amount of the city under gang territorial control, it has more highly-weaponised gangs and gangs that have become locked into patterns of territorial-motivated violence.”

This is due in part, Haysom and her colleague Mark Shaw found, to the sale of about 2,000 firearms to gangs in Cape Town by corrupt policemen between 2010 and 2016.

Much of the issue comes back to firearms and, by extension, national corruption. Corrupt cops sell guns to gangs, and the cycle of violence continues.

“The influx of guns into Cape Town and the mushrooming of the number of gangs has encouraged younger men to make bids for power, start new rival gangs and recruit even younger members,” said Haysom.

Without state reform, people will continue to die on the Cape Flats and the army is not necessarily the answer. In fact, Haysom told Daily Maverick that law enforcement is the number one reason for criminal transplantation.

“Gangs and criminal organisations are pushed out of areas, rather than pulled. It’s hard to start up a new operation somewhere else, but once it’s there it’s hard to stop.”

But Haysom said gangs have already spread across the country, with evident connections between gangs in Cape Town, Johannesburg and Durban.

“Criminal figures in Durban will contract Cape assassins through their connections to the Cape gangs; likewise Cape gangs contract criminal assassins from Durban. We also see sharing of expertise around the drug economy.”

So what is the solution? Again, the issue comes back to guns and corruption. National gun control will help prevent guns from finding their way back into gangs, but only if police comply.

“We talk about the ‘war on crime’ all the time and we see the battles on the streets, but the major strategic operations of gangs are very far away from the streets.”

The military, however, will likely only be operating on the streets, despite not being “trained to operate with civilians and citizens in a way we would expect an accountable and democratic police force to operate”.

According to Haysom, even if the military is deployed for a second period, after their three months end, the situation will likely not be resolved.

“It can become permanent or semi-permanent because there aren’t any other ideas. The political will or funds spent on the military deployment preclude any other measures being taken. Or it dips below public and media attention, the military is withdrawn, the situation isn’t resolved, it flares up and the military or the police are sent back in.”

Although on the face of it, the public appears to have more faith in the military than they do the SAPS, Haysom worries that the longer soldiers are present in a community, the more likely they are to succumb to corruption.

“What we really need is a strategy for urgent intervention at a community level, but much more crucially we need to understand how to cut off money and political protection for the people at the top,” she said. DM

Ninety One • 4 hours ago