Another bloody weekend in Cape Town, with SANDF appeari...

Another bloody weekend in Cape Town, with SANDF appearing unprepared for deployment 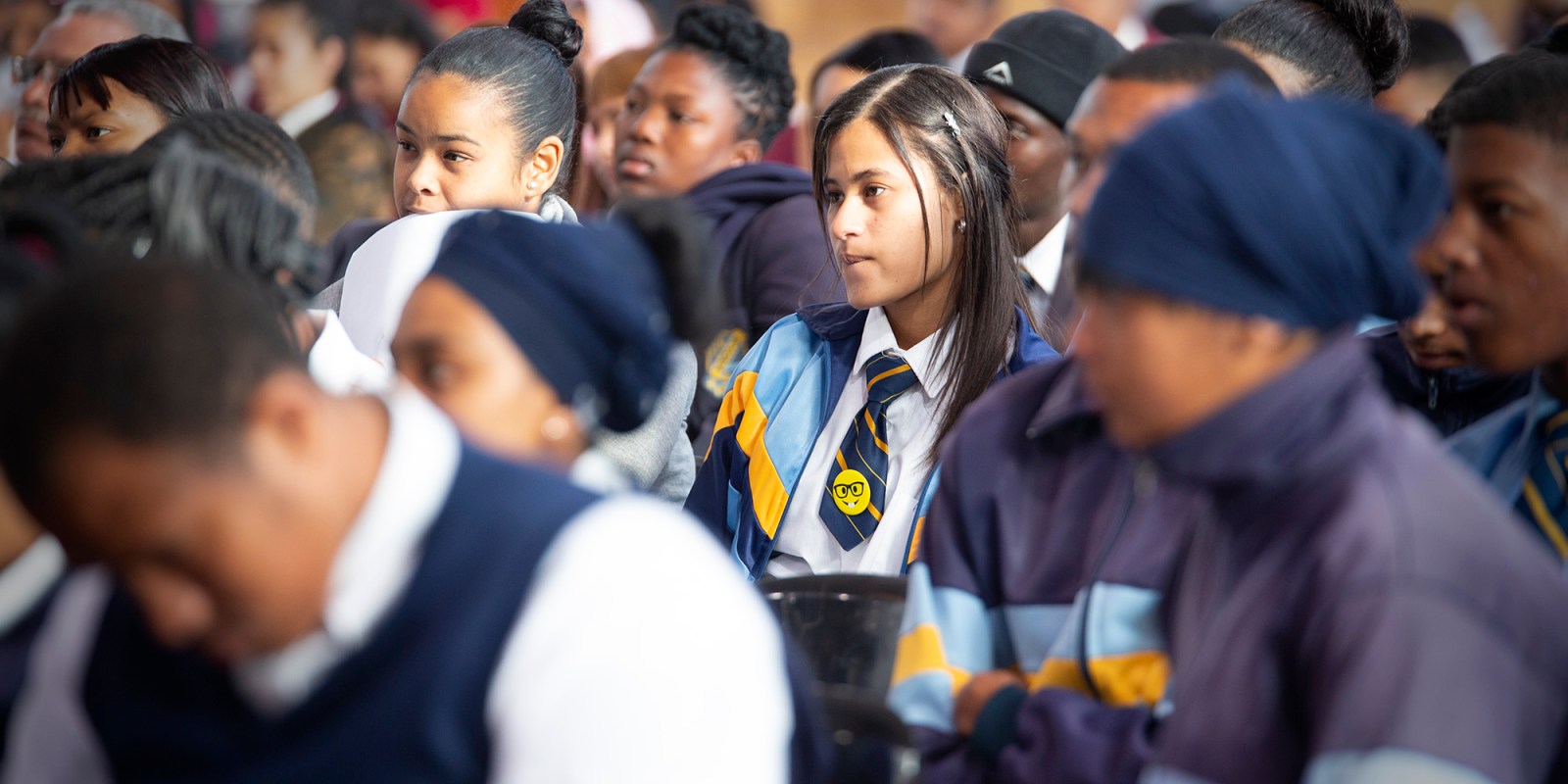 More than 200 learners from schools in Hanover Park engage in a dialogue organised by the Department of Justice and Constitutional Development on Monday 15 July 2019. The dialogue focused on challenges faced by young people in the community such as gangsterism, drug abuse, cyberbullying and sexual violence. (Photo: Leila Dougan)

Although a police operation over the weekend netted 143 arrests, 43 murders were still committed over the same period in the Cape metro. Meanwhile, soldiers are yet to be spotted on the streets of the Cape Flats, following the announcement that the SANDF would be deployed to particularly violent areas to bolster police in tackling gang crime.

“What’s the use of bringing the army in if the gangs are just fighting against them?” a worried Hanover Park resident questioned the head of the Western Cape’s Anti-Gang Unit.

The resident in question was a teenager: one of a few hundred high school pupils gathered at a Hanover Park school on Monday July 15 to hear representatives from the police, justice and social welfare sectors address their concerns.

Though the panel on stage – which included deputy justice minister John Jeffery and the Western Cape’s Anti-Gang Unit chief Andre Lincoln – were keen to broaden the discussion to encompass topics like cyberbullying and child pornography, it was clear that the number one topic on the pupils’ minds was the gang war ravaging the Cape Flats.

Jeffery, who had attempted with limited success to drill the teenagers on their constitutional rights, told Daily Maverick after the event: “Gangsterism is a major issue for kids in that area. There’s no point in talking about people’s rights when they can’t exercise them.”

The pupils were drawn from five high schools in Hanover Park and Manenberg: two of the 10 areas to which Minister of Police Bheki Cele has announced that members of the South African National Defence Force (SANDF) will be deployed for three months.

But to quote Cape tabloid Daily Voice: “By [Sunday] night, not a single soldaat had set foot in gang hotspots”.

Cele’s announcement that President Cyril Ramaphosa had approved the deployment of the army to the Cape Flats appears to have set the cat among the pigeons behind the scenes somewhat, with reports that the SANDF was under-prepared for the sudden decision. A statement from the Western Cape government explained:

“SANDF troops arrived in the Western Cape over the weekend. However, [they] were not deployed on Friday as initially announced by Police Minister Bheki Cele, as the correct authorisations and paperwork still needed to be completed.”

The deployment involves bringing in troops from elsewhere in the country – a deliberate move to ensure that no soldiers have existing links to gang members – and preparing them for what are effectively peacekeeping duties.

On Monday, Lincoln told students there was no reason to fear that the presence of the military would exacerbate violence in the area.

“The army will be on the perimeters of our community ensuring the police has […] support. That’s all,” Lincoln said.

Netwerk24 reported, meanwhile, that defence force bosses were unhappy with Cele’s pre-emptive announcement of the army’s arrival on the Cape Flats as it removed the element of surprise.

But Lincoln was at pains to assure the pupils from Hanover Park and Manenberg that police had already begun a major crackdown on gang activities.

“This past weekend I spent Friday night, Saturday night and last night in Hanover Park,” he said.

Western Cape Premier Alan Winde said 143 arrests were made over the weekend in the Cape metro as a result of a police operation which began on Thursday night in Philippi, Steenberg and Delft. Five police officers were also arrested.

However, warned Winde: “Despite this heavier police presence, and Minister Bheki Cele himself going out on patrol, 43 people were still murdered – some of them in the very areas where the operation was targeted”.

The weekend also saw a two-day provincial crime summit take place in Paarl to discuss the Cape Flats crisis, at which Cele was also in attendance. Resolutions agreed upon included greater community involvement and better capturing and sharing of data.

Winde has also committed to implementing internship programmes in the Cape Flats – once areas are stabilised – to create better economic opportunities for youth.

Although Community Policing Forum (CPF) leaders have called for the establishment of specialised courts to fast-track the prosecution of gang members, the proposal has yet to be formally discussed.

“This is something [the Department of Justice] can engage with,” deputy minister Jeffrey told Daily Maverick on Monday.

Although most residents seem to welcome the sense that gang violence is finally being treated as a top priority, there are already indications that the Cape Flats crackdown will need to be managed with extreme care.

Crime experts have warned that a sudden crackdown on Cape Flats gangs could inadvertently spread the problem across the country, as gangsters might flee to other provinces. Researchers Mark Shaw and Simone Haysom pointed out in an op-ed on News24 that a similar phenomenon led to the Sicilian Mafia extending its tentacles throughout Italy.

Indeed, Cele was quoted on Sunday as saying: “The gangsters are beginning to spread around. We met [them] on Saturday in another province, but we will deal with that.”

Complicating matters is the complex relationships between gangs and the civilian communities in which they live.

Lincoln alluded to this on Monday in Hanover Park, telling the pupils: “Not too long ago we found out that the gang here in Hanover Park escorts kids to school through other gang territory”.

Lincoln implied that the gangs did this in order to recruit youngsters into their ranks, and pleaded with the teenagers present to resist. But the reality is that some gangs extend “protection” services of a kind to their communities, and as a result enjoy a degree of loyalty.

Daily Voice quoted Grassy Park police commander Dawood Laing as reporting that on Saturday, police were prevented from arresting three alleged members of the Mongrels gang after “the community threw stones [at the police] and helped the skollies escape with the vehicle and the guns”.

Back at the Hanover Park high school dialogue, pupils continued to raise their hands with anxious questions.

“What’s gonna happen to the gangsters in our community? It’s getting worse and worse!”

“Can we have an anti-gang unit at our school, because we don’t have?”

“Our learners are being attacked on the way to school and back. Are you going to provide transport?”

“Can we have more programmes to keep learners busy…a lot busy?”

Lincoln attempted to reassure them that matters were under control.

“We are working towards taking back the streets,” he said. “We understand how difficult it is for you who are living in these areas.”

Earlier, Lincoln had given the students the number for the anti-gang unit’s toll-free hotline, and urged the teenagers to save it and use it. Only a handful took out cellphones to note it down. DM