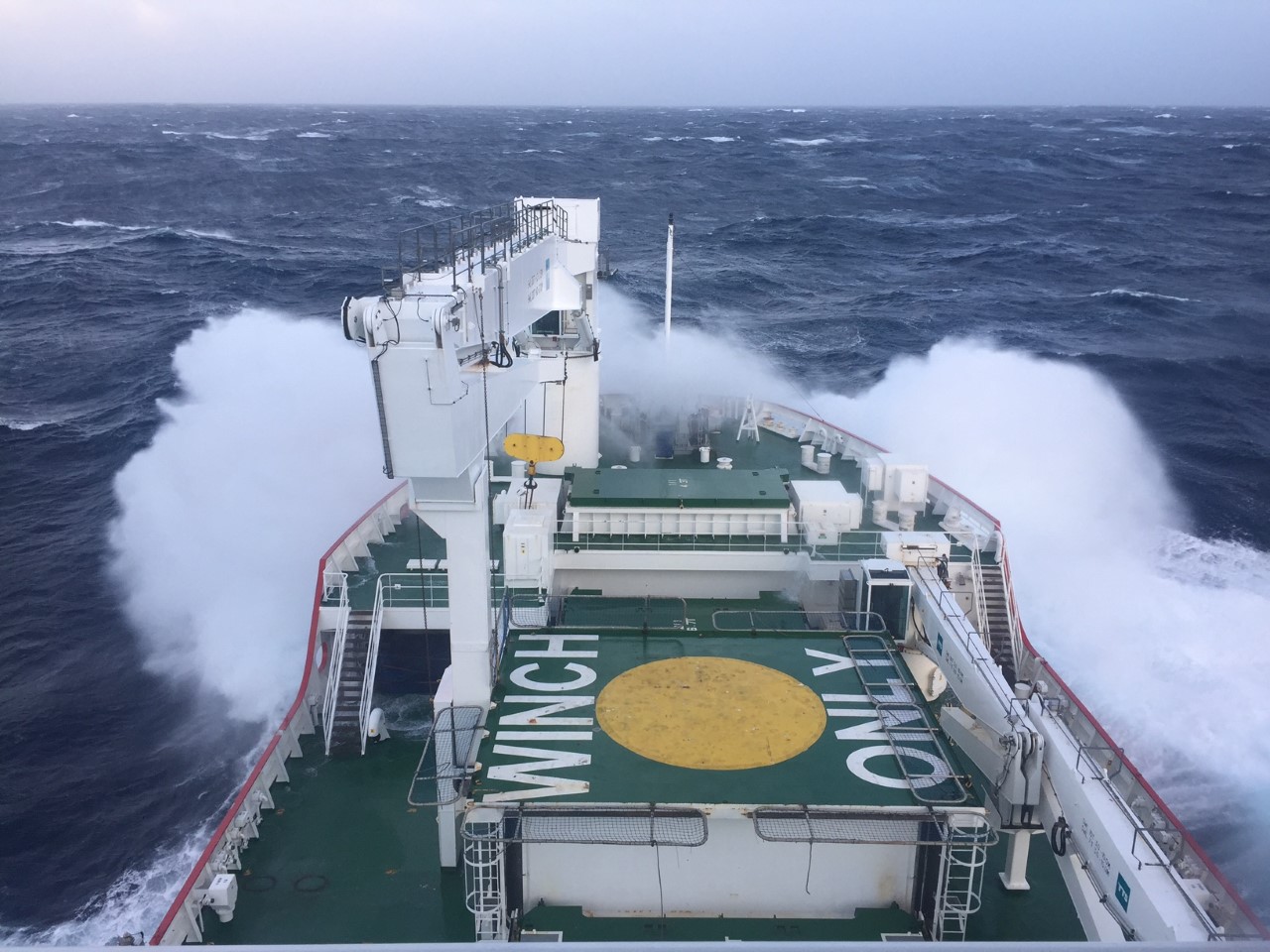 The students, lecturers and scientists participating in the SEAmester programme aboard the SA Agulhas II had to bolt the storm doors after receiving some unnerving weather forecasts…

Shortly after 5pm on Saturday 6 July, the SA Agulhas II, the South African icebreaking polar cargo and research ship owned by the Department of Environmental Affairs (DEA), started feeling the impacts of the massive storm headed her way from the South Atlantic Ocean.

News had arrived at the vessel via three daily forecasts and shipping synoptic charts in the preceding days.  The SEAmester/Agulhas System Climate Array (ASCA) cruise had been spared bad weather up to this point, with a massive cold front slipping southwards in the first few days of the cruise. However, this time, we did not look to be as lucky.

The SA Weather Service Marine Unit in Cape Town recently developed a 6km high-resolution wave forecasting model (for up to 67 hours) for the South African coastline. The supporting forecast for the waves we could expect to experience was sent by the Cape Town Weather Office, where the Marine Unit is based. And what a revelation that turned out to be! The powerful storm was forecast to bring winds exceeding 50 knots, with significant wave heights reaching 10m.

Given that the SA Agulhas II is a massive ice-breaker and was designed to handle the Roaring Forties and Furious Fifties when it heads south to Antarctica, we were assured that we did not need to seek shelter within Nelson Mandela Bay. This, then, offered an ideal opportunity to compare the wave and wind forecast we had received to the reality we would face.

As the wind and swell increased on Saturday afternoon, so too did our excitement. All scientific operations had to be halted and storm doors were bolted down for everyone’s safety. No one was permitted outside especially during the dark hours, for fear of being washed off the ship. Winds reached 50 knots through the night, gusting to more than 60 knots at times. Swells reached 8m, with wind waves increasing these to 10m during the peak period of the storm. Lightning and rain were aplenty as the cold front passed over the vessel, bringing with it strong and gusty winds.

By mid-morning on Sunday the weather began to improve, but the heavy swell continued well into the day. It began to taper off that evening when 4.5 m waves were observed. Work resumed to the joy of the scientific research team, who were able to continue profiling the water column, collecting water samples at multiple depths up to 4,500m.

All in all, a fantastic experience and a unique chance to put to the test the SAWS forecasting products designed for maritime and shipping purposes. ML