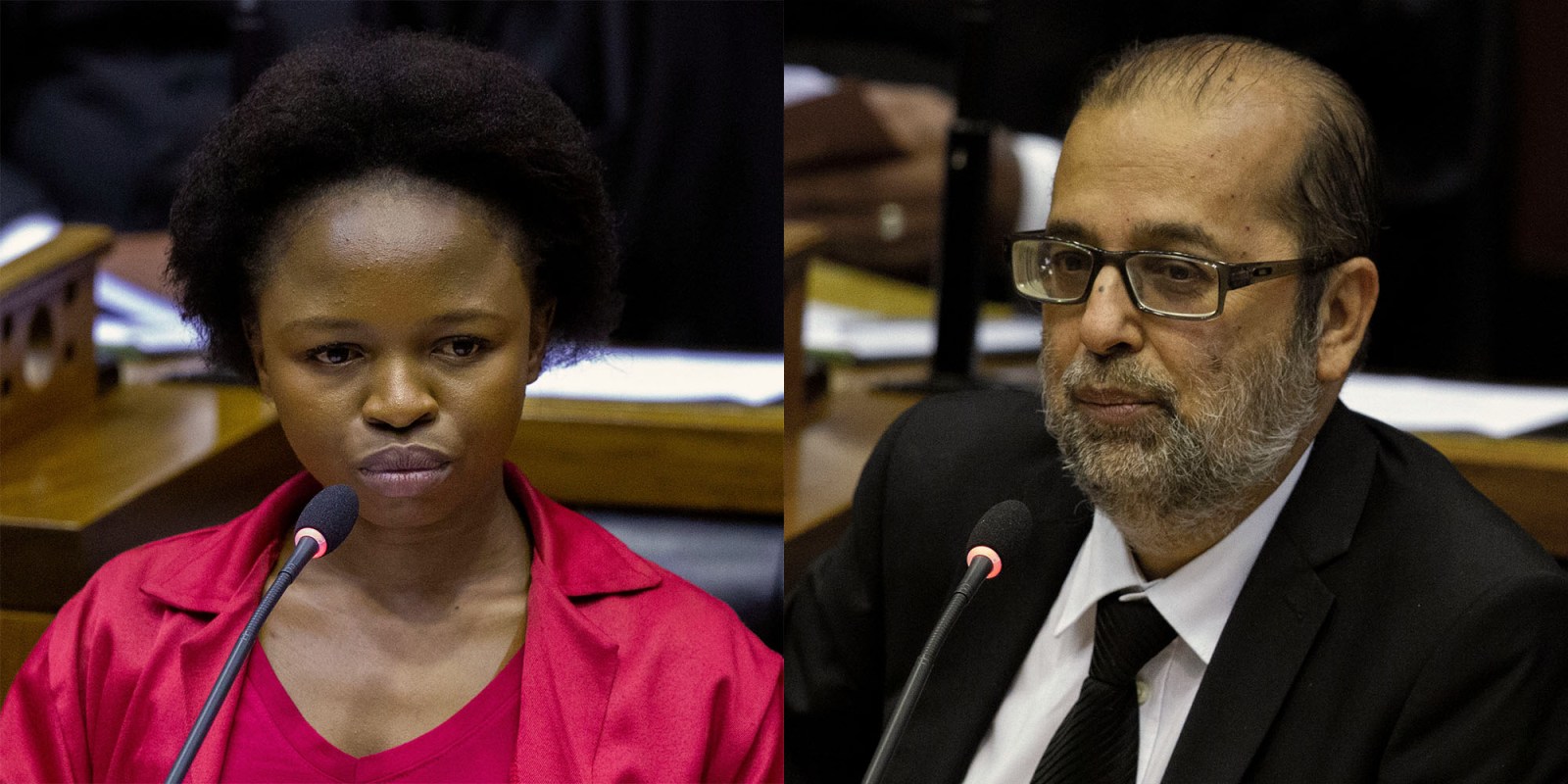 At the National Assembly debate to unpack President Cyril Ramaphosa’s SONA, a new dynamic was on display, thanks to an unprecedented influx of recently elected MPs under the age of 35. While many will welcome this injection of youth, there were signs the old guard might be chafing against what the ANC’s Yunus Carrim termed ‘youth fundamentalism’.

It was always going to be interesting to see what the Fallists would bring to Parliament. And judging by the tenor of Tuesday’ 25 June’s SONA debate, their presence in the House looks likely to have a disproportionate impact.

First to the podium was newly-minted ANC MP Nompendulo Mkhatshwa. Now 26, Mkhatshwa became one of the foremost faces of the #FeesMustFall protests while registered as a BSc student at the University of the Witwatersrand, where she would go on to serve as SRC president.

Even as a student activist protesting against the ANC government’s higher education funding policies, Mkhatshwa made no secret of her political affiliation. As a student, she had a part-time job as a researcher at Luthuli House. When she shot to prominence through the Fallist movement, she was photographed for the cover of Destiny magazine wearing an ANC doek: a move which reportedly tarnished her credibility among other student activists.

The reason why Mkhatshwa became the focus of media attention for her role in a supposedly leaderless movement is not hard to see. Smart, brave and photogenic, Mkhatshwa was one of a small cohort of similarly bright young women who were seized upon as the exciting new faces of South African activism.

But for someone who made her name through oppositional protest, the move to Parliament as an ANC MP must have been a daunting one. To make her maiden speech during the post-SONA debate, even more daunting.

The role of ANC MPs during this particular annual debate is effectively to serve as verbal bodyguards for the president and goalkeepers for the opposition’s shots. They are required to parrot the ANC line on issues and take digs at the other parties where they can.

Would a once-fiery Fallist be able to maintain her activist spirit under those constraints?

The answer, it turned out, was very much: Yes. But the most curious aspect of Mkhatshwa’s confident maiden speech was that – if you hadn’t known who was speaking – you might easily have assumed she was a member of an opposition party from the content of her address.

“Our women are not safe. Queer bodies are not safe. The night and the day scare us… Is there any space for us in society?” thundered Mkhatshwa.

“The scourge of patriarchy will not go away by simply appointing women in leadership roles, because having a seat at the table doesn’t mean you are on the menu,” she continued.

Mkhatshwa compared the action of the SAPS in dealing with protest action to those of apartheid cops and called for the unconditional release of Fallist activists from custody.

To repeat the obvious: this is not standard fare for an ANC MP in the post-SONA debate. Indeed, Mkhatshwa displayed no interest in toeing any particular party line. She used her maiden address instead to issue a challenge to male leaders within her own party to do better.

The message sent by her first parliamentary speech was that in Mkhatshwa, the ANC does not seem likely to have selected a compliant and docile backbencher. Hers will be a parliamentary career worth watching.

Following shortly after Mkhatshwa at the podium was the EFF’s Naledi Chirwa. At 25, Chirwa is the EFF’s youngest MP and previously served as the party’s student media and communications officer.

But Chirwa’s previous moment in the media spotlight occurred independently of the EFF. She was one of three young women who staged an extraordinarily powerful protest at the IEC’s Pretoria results centre at the tail-end of the local government elections in 2016.

At the moment when former president Jacob Zuma took the microphone to speak, the three women slipped in front of the stage and silently revealed posters reminding the audience of the alleged rape of Fezekile Kuzwayo (“Khwezi”) 10 years after Zuma’s acquittal.

The three activists were manhandled away by security, but the protest caused nothing short of a meltdown – with particularly furious reactions from ANC ministers Lindiwe Zulu, Nomvula Mokonyane and Bathabile Dlamini.

Two of those ministers are now gone, but when Chirwa mounted the podium in the National Assembly to deliver her maiden address as an MP on Tuesday, it was to a House which still included Minister Lindiwe Zulu.

Like Mkhatshwa, Chirwa displayed few traces of nerves as she launched into what was the EFF’s most blistering attack of the day.

“You, Mr President, have sold your soul to the captains of the industry, who are wholly white and men. In return, you have made it your mission to sell dreams to the people on whose ticket you now occupy your office.”

Chirwa delivered a litany of the ANC government’s failings, particularly relating to youth and black women, before being pulled up on a point of order for accusing the ANC of being complicit in the “brutal murders” of Benjamin Phehla and Bongani Madonsela – students who died during the #FeesMustFall protests – “just because they asked for a free education that you promised when they were still toddlers in 1994”.

Chirwa’s male colleagues in the EFF pointed out that it is parliamentary custom that an MP giving their maiden address not be interrupted (a tradition that exists as an acknowledgement of how nerve-racking this event can be).

“You are jealous, she is out-shining you!” EFF spokesperson Mbuyiseni Ndlozi charged the ANC caucus.

Chirwa was allowed to complete her address after reluctantly agreeing to withdraw the comment about government complicity in murder.

But the after-effects of her incendiary speech lingered throughout the day, with more than one ANC speaker making reference to the content of her address. This lasting impact, together with the unusual interruption of her speech, again made her freshman address highly out of the ordinary.

To put it bluntly: there was something about Chirwa’s maiden outing in the House that appeared to get under the skin of the ANC.

Voicing this discomfort openly was the ANC’s pre-lunch sweeper, NCOP MP Yunus Carrim, an always energetic orator who was in particularly barnstorming form on this occasion.

Carrim explained that he had prepared a reasonably conciliatory response to EFF leader Julius Malema’s earlier address because he had found Malema’s words unusually temperate – until he realised that Malema had “sent Chirwa to do the work”.

Carrim accused the EFF of being unhealthily preoccupied with the idea that only youthful political leaders could deliver the goods.

“Why this youth fundamentalism?” he demanded, suggesting that the party was in thrall to the notion that “everyone over the age of Malema is a hack”.

Carrim’s candour represented a notable departure for the ANC party line of the day, which had seen multiple speakers paying respectful lip service to Youth Month and the need to prioritise the rights of young South Africans.

The evident delight of the ANC caucus in response to Carrim’s address, however, suggested that the veteran politician had captured a wider underlying sentiment.

Later that afternoon, however, EFF NCOP MP Nkagisang Koni gave it to Carrim with both barrels in return.

In concluding her remarks, Koni said: “We are the generation that has discovered its mission – and we intend to fulfil it.”

It was as much a warning as a statement. In this sixth Parliament, South African youth has truly arrived – and as the post-SONA debate showed, they have no intention of keeping quiet and respecting their elders. DM