Member of Ramaphosa’s government mocks his dream of a future city, bullet train

Member of Ramaphosa’s government mocks his dream of a future city, bullet train

One of President Cyril Ramaphosa’s own team – deputy minister of the environment, fisheries and forestry Maggie Sotyu – has reposted a WhatsApp image mocking parts of his State of the Nation Address this past week, once again exposing the factional compromise that he has to contend with in his effort to revitalise the economy.

The MPs in red overalls awoke from their almost 90-minute slumber when President Cyril Ramaphosa spoke about dreams in his State of the Nation Address on Thursday night.

They mocked him when he said those who dreamt of a better life gave him hope. Ramaphosa also aimed high by saying he wanted to see bullet trains in South Africa, and the creation of new cities, as had been done with great success in countries like China.

As if to shoot back at the EFF heckling, Ramaphosa went off-script a few times, once saying nothing was impossible if everyone worked together.

“All this is with the doers who are able to get things done, not just the people who sit by the sidelines and scream and shout.”

Even though his party maintained a united face in Parliament, some of these words might as well have been aimed at those very people he had appointed to help him achieve what he had set out in his address to do – and one of them isn’t Good leader and minister of public works Patricia de Lille.

Only a few hours after Ramaphosa concluded his address, deputy minister of the environment, fisheries and forestry Maggie Sotyu posted an image of a sleeping Ramaphosa, with a thought bubble containing a bullet train, and the caption, in capital letters: “HE’S DREAMING!!”.

She distributed it on a Whatsapp group for ANC Free State provincial executive members. The ANC in this province hasn’t wholly been behind Ramaphosa’s leadership, and, like in the case of ANC secretary general and former provincial chairperson and premier, Ace Magashule, have even been openly opposed to it. 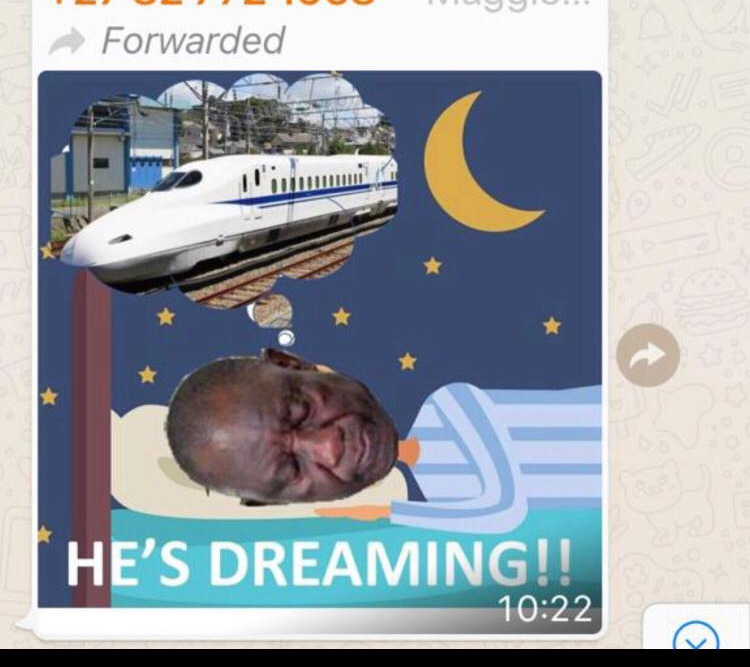 Sotyu laughed it off when she was called for comment. She said she merely forwarded the image, and wouldn’t know how to create such at all.

“It was sent to me and I don’t know where it comes from.”

She said she didn’t think the person who created the image did so to make fun of the president but merely created it to show that it was necessary to dream big in what you do.

“If they were making fun of the president, they were merely wasting their time,” she added.

Referring to the portfolio she was appointed to at the end of last month, she said:

“Even here where I am, you have to dream big to achieve what you want to do.”

Asked whether she supported what Ramaphosa had said in his SONA, Sotyu said she was fully behind him. She said he was correct to dream about the “trains and big cities”.

Sotyu even referred to civil rights leader Martin Luther King’s famous “I have a dream” speech in 1963, by saying:

“If you have a dream, you can take it back to this American guy who said that America will be led by black people.”

Even though Sotyu’s forwarded post raised some eyebrows within the ANC, the party’s head of presidency Zizi Kodwa, only responded in a Whatsapp message by saying:

“SONA is a statement of intent and outlines a broader vision, the armchair critiques (sic) have no vision and [are] ill informed, I wouldn’t like to comment further than this.”

Magashule himself on Thursday night defended Ramaphosa’s expression of his dreams by saying:

“What the president has said is not his dream, it’s the people’s dream, the nation’s dream which is going to be realised.”

In a press conference following the ANC’s lekgotla earlier this month, Magashule said the party was impressed with the new towns built in China and would like to replicate it in South Africa. DM