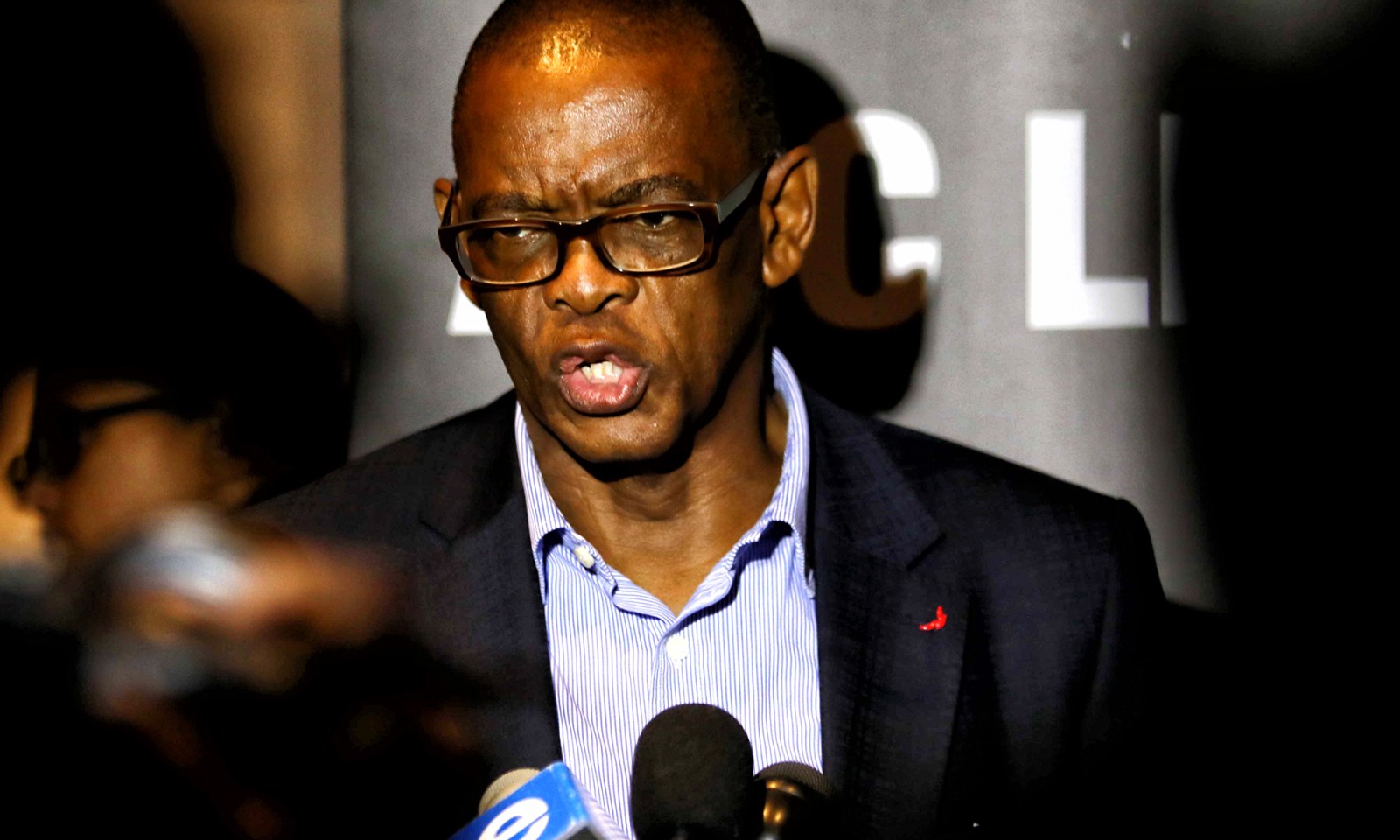 As news broke of South Africa’s economy nose-diving, ANC secretary-general Ace Magashule dished up more of the same solutions to the country’s ills: A little bit of China, some radical economic transformation, and the monitoring of the party’s public representatives (this time, for real).

At the start of its annual National Executive Committee Lekgotla before the weekend, the ANC would not have known that South Africa’s economy is on the same bad path it was a decade ago when the global financial crisis hit (Jacob Zuma was also about to become president, but he wasn’t the problem yet).

This time it was a homegrown financial crisis fuelled by power blackouts — and there are people in the ANC who are aware of this. For example, former president Kgalema Motlanthe, during a talk at the Gibs Business School in Johannesburg on Tuesday night, said Eskom was central to the economy:

“If we don’t get Eskom right, nothing works.”

Still, it was clear that the ANC lekgotla didn’t — and couldn’t — come up with any prize-winning plans to salvage the economy. The party’s top 86 leaders are too split for that. The party’s post-election lekgotla is supposed to set the tone for government for the next five years, or, as ANC secretary-general Ace Magashule announced, for the next 25 years (because, obviously, we are working towards the African Union’s Agenda 2063 here, give or take 20 years).

Somehow the impression created at the end of this lekgotla was that the real planning would not be happening in Magashule’s ANC, but in government — or Ramaphosa’s ANC. There wasn’t much “New Dawn” in the set-up of the press conference, with Magashule flanked only by spokesperson Pule Mabe. During briefings like this, many of the party’s policy wonks or sub-committee heads are usually present, even if they don’t all get a turn to speak.

Proof of the lekgotla shambles came several hours after the briefing, late on Tuesday night. At least two ANC NEC members — Finance Minister Tito Mboweni and wannabe finance minister Enoch Godongwana — rubbished Magashule’s statement, specifically where he spoke about the expansion of the Reserve Bank’s mandate to deal with unemployment and growth, and “quantitative easing”, aka printing money to pay off debt.

“I am now reaching a point of total exasperation with… continued attacks and obsession with the South African Reserve Bank,” Mboweni posted on Facebook. And we’re not even a full week into the five-year term of this sixth administration.

The party’s press statement took Magashule almost as long to deliver as, say, the president’s State of the Nation Address, which is set for three weeks’ time. The party has apparently “agreed that unemployment is a national emergency” and agreed to reduce it from 27.6% to 14% in the next five years. Obviously, the party knew about the bad unemployment stats long before, but as it has promised the electorate some change it is compelled to sound as if it is discovering things for the first time.

China was on Magashule’s mind, but not for the 30th anniversary of the government crackdown on Tiananmen Square protesters, which was not commemorated in Beijing on Tuesday. Instead, Magashule said South Africa should be more like China in setting targets and meeting them.

“China says by 2020, which is next year, there won’t be poverty in China. They are left with 60 million people in poverty,” he said. “In 1999, South Africa was far better than China. And China, per year, they create 400 million multi-millionaires and those guys become SMMEs. So China, next year, 60 million [people] will be off of poverty, so why can’t we plan the same? And that’s what we’re doing. There are figures, that we won’t talk about, if we say we want young township entrepreneurs, why don’t we come with figures, say, 200,000? If we say 200,000, why don’t we say to Treasury, ‘budget for capacity, for assisting them, for giving them the necessary tools’?”

Even though China has seen an impressive surge of rich people, Magashule might have been exaggerating a little (in 2017 there were a reported 1.6 million people with more than 10-million yuan, or $1.47-million, up from 180,000 in 2006). It’s also not clear whether the ANC has actually decided to execute such targets or if this is a plan Magashule himself feels strongly about.

China’s ability to build new towns also impressed Magashule, who said this was also part of the ANC’s plans.

“The ANC will strive to undermine apartheid spatial planning as part of the national effort to ensure integration of communities. The ANC must embark on a programme of building new cities which will have places of settlement closer to work and other social amenities,” he read off the statement. Government will support strategic economic zones that will create jobs and around which small towns would be built, he said. He went further by saying: “We want to build new towns. The president is very adamant about it.”

Magashule made an example of China again, saying that, in 1989, “Shanghai wasn’t there”, but because of “planning [and] visionary leadership”, it developed. (He was exaggerating a bit since Shanghai has existed since the 15th century, but only developed into the major financial centre it is in the past three decades.)

Rwanda also featured, with Magashule promising that the ANC will this time monitor its public representatives for real (his deputy, Jessie Duarte, was previously tasked with this, but her workload meant this hardly happened).

As he announced the names of his new Cabinet members, Ramaphosa said last week that they would sign performance contracts.

Magashule said: “The president is going to be very harsh, and we are going to support the president. We will be calling people and saying, ‘You are failing, you are lazy and we do not see you moving’. Because it is the ANC that goes back to the masses to say, ‘Sorry, vote for the ANC.’ ”

He said the party would do as in Rwanda, and fire ministers that didn’t meet their given tasks over a period of four months.

“So if South Africa wants to succeed, ministers and deputy ministers must be given tasks with time-frames. Otherwise, if you do not perform you cannot blame us; you will know that you have failed.” (Here Magashule was again exaggerating, as the firing of ministers in Rwanda is very rare, and even though there are performance contracts, or imihigo, it mostly affects those in provinces and districts, but these do project the image of the president as a no-nonsense efficient guy.)

Magashule’s delivery at the press conference might have been fairly deadpan, but he planted hints of his factional loyalties throughout the speech, such as singling out for mention, by way of example, only two ministers — Lindiwe Sisulu of Human Settlements, who publicly aligned herself with his faction a few weeks ago, and Nkosazana Dlamini-Zuma of Local Government, who hasn’t been playing factional politics of late, but who did run on the “radical economic transformation” ticket against Ramaphosa for the ANC’s presidency in 2017.

Magashule also mentioned former SABC COO Hlaudi Motsoeneng and former president Jacob Zuma as examples of capable people without formal qualifications. Magashule’s view on their performance possibly does not correspond with those of some of his ANC colleagues.

By the end of the almost two-hour press conference — to the sound-track of protesting ANC Youth Leaguers outside — Magashule was visibly irritated by questions from journalists (and he also denied that there ever was a call to disband the party’s integrity committee). He spoke in patronising tones about responsible journalism and with some exasperation about radical economic transformation and the racial inequalities that still persist in South Africa.

He didn’t sound like the spokesperson for a party that has just won power for another five years or like the Angry Ace he was a few weeks ago when he asked people to stop singing songs praising Ramaphosa; he mostly sounded like a defeated man gearing up for his next fight. DM