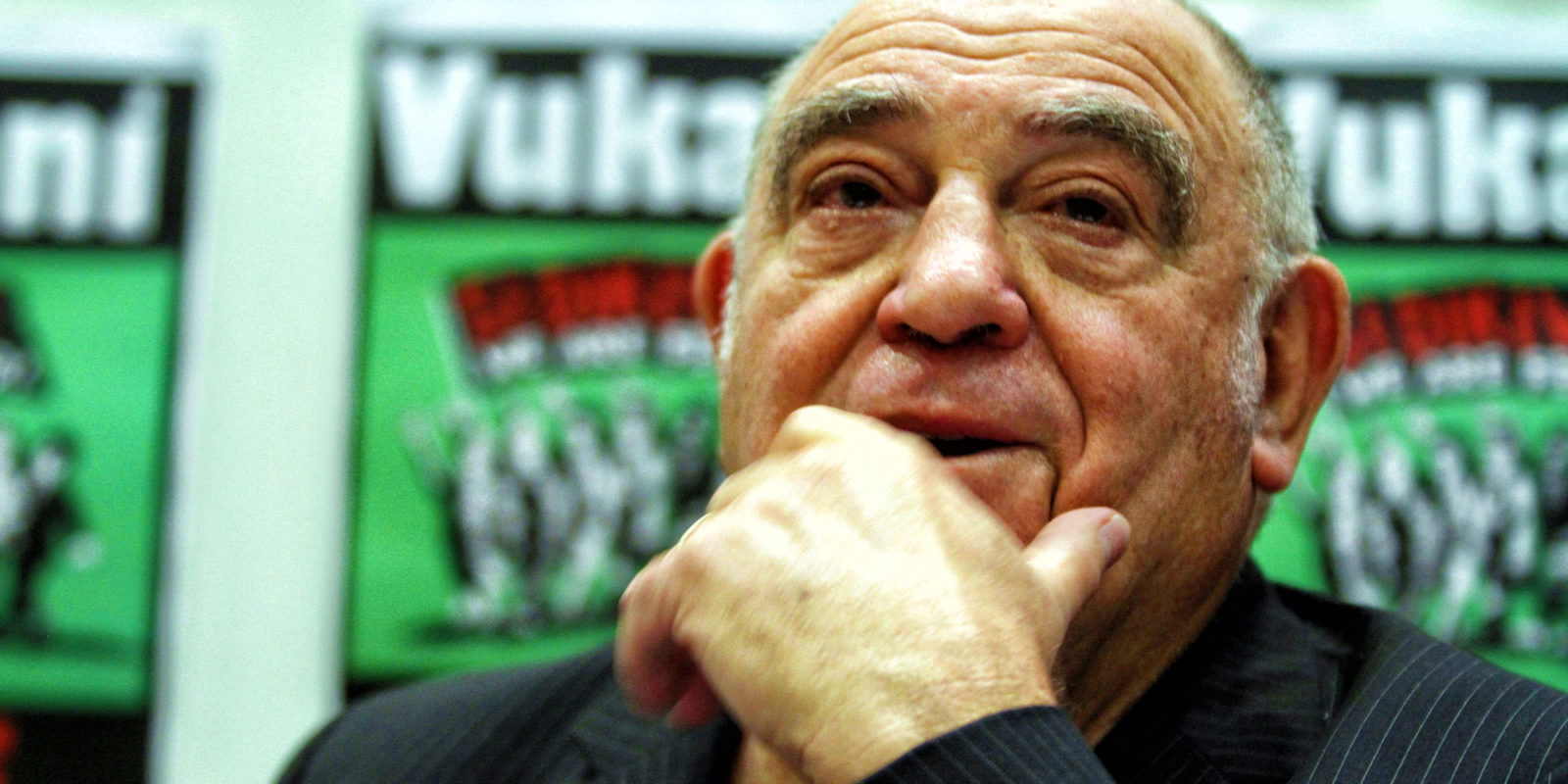 Former Minister of Intelligence, Ronnie Kasrils at the launch of ìSidikiwe! Vukani! No Voteî campaign at the Wits University on April 15, 2014 in Johannesburg, South Africa. The campaign is calling on voters to avoid voting for the ANC or DA or to spoil their ballots. The "Vote No" campaign is co-headed by former deputy health minister, Nozizwe Madlala-Routledge. (Photo by Gallo Images / Sowetan / Bafana Mahlangu)

To build a socialist left in South Africa requires organic, dialectical unity between parliamentary and extra-parliamentary activity, each strengthening the other. The left project for socialism is in the doldrums: It is time for a broad left consultation process and for comrades to bury their differences.

With his reference to my critique of the South African Communist Party (SACP), its handling of the Zuma years, and issue of its non-independence from the ANC, Jeremy Cronin seeks to trivialise aspects of my (and his?) argument, by referring to “the narcissism of small differences” (Daily Maverick, A response to Ronnie Kasrils’ response to me.)

The phrase can be traced back to Freud’s analysis of family feuds and in leftist disputes over interpretations of Marxism, parodied in satires such as the acclaimed Monty Python film The Life of Brian. Remember the hilarious bickering between the would-be leaders of the enslaved Judaean people about how to overthrow Roman rule? That had given rise to the split between the People’s Liberation Front of Judaea and the Judaean People’s Liberation Front with their handful of members each.

It is Jeremy Cronin, in what I believe are his otherwise sincere endeavours, who needs to avoid sounding as though his every utterance is a stubborn defence of everything the SACP has done in the new conditions post-1994, but particularly from 2005 when it launched its campaign to replace President Thabo Mbeki with Jacob Zuma.

Given that Cronin was responding to my initial article in Daily Maverick, A curate’s egg of an election in his further response Wrecking ball of State Capture was halted from within ANC movement itself, it is he who has provoked the sequence for a Pythonesque serial exchange. For that reason, I was holding back on this response to his, but I felt it necessary to challenge his assertion that there is some kind of kitchen-sink dispute that I am guilty of. For by his trivialisation he seeks to bury major errors the SACP is guilty of which need to be debated — avoiding, as he writes, “getting sucked into an endless to-and-fro of we-told-you-so’s” — if we are to go forward and chart a path towards socialism.

Cronin writes: “There are three apparently central (but in my view ultimately distracting) issues in contention in our debate. One, the role of the SACP from around 2005 on the Zuma question. Two, the role of the SACP in the gathering momentum in dislodging the Zuma-led State Capture network. And three, how should the SACP position itself electorally?”

I will refrain from regurgitation regarding the first two points. Not only have I made my case but I believe that so obvious has it been that the SACP behaved opportunistically in supporting Zuma’s rise from 2005, to as late as 2016-17 when his fall was obvious, that this has been widely recognised in our country. In any event, the interested reader can refer to all four articles that have been published in the DM since my initial “A curate’s egg of an election”.

I have dealt with the third point, how should the party position itself electorally? Since it leads to the central question — the building of an effective left in our country — I will elaborate.

As observer and guest at the SACP’s 14th Congress in July 2017, I was struck by the strong mood among many delegates arguing that the party should field its own candidates for the 2019 general elections. The leadership delayed a decision, arguing that the party should await the outcome of the ANC’s December Nasrec conference. When Ramaphosa emerged the winner the idea of doing so dissipated. That was back to square one — Polokwane 2007 — which placed faith in an ANC president who the party judged would be good for the left.

Now Cyril might be a good guy. A better bet than Zuma. In the honeymoon period, he is bound to favour communists in high office. I certainly think he will do his best to sweep out the rot in the ANC, government and state and has started with intent. However, regarding the fundamental issue of moving the economy in a leftward direction, away from neoliberal free-market policies, I have my doubts. That is not to say the left should not strive to influence him and win the battle in the ANC.

How best to do that?

Imagine the party having had the guts to field its own candidates. There is no reason why this could not have been agreed early in 2018. That would have enabled the party to do all the work Cronin claims it did from within the ANC and outside it, regarding assisting Ramaphosa in his campaign for ANC president against a Zuma candidate. Following Ramaphosa’s success, the party could have moved in a friendly way, through discussion and negotiation with the ANC, to an agreement on an electoral pact to field its own candidates in 2019. Our proportional representative (PR) electoral system would have meant that it was not in direct competition with the ANC.

With sustained work over at least a full year, does Cronin not believe the party could have creamed off 500,000 votes — equivalent to 10 MPs? That would have not been a disaster for the ANC. More particularly, since that bloc would be an ally of the ruling party in Parliament — but not an uncritical one where and when required.

Furthermore, given the low voter turnout in the recent election, it is quite likely that many who stayed away from the polls, including those who spoilt their ballot papers, could have been wooed back by the SACP’s campaign, rewarding the party candidates with their vote.

The Socialist Revolutionary Workers’ Party (SRWP) received a derisory number of votes, but I don’t think Cronin would equate the SACP with them. Most likely the party would have represented a compelling motivation for the hundreds of thousands of trade union members, among others, who have become disillusioned with the ANC, to vote for a serious socialist party.

This is not to make a fetish of elections. A left party must use the opportunities provided by a democratic dispensation. To build a socialist left in South Africa requires the organic, dialectical unity between parliamentary and extra-parliamentary activity. Each strengthening the other. The left project for socialism is in the doldrums at a time of immense opportunity with massive unemployment and economic stagnation. There is an acute contradiction within the ruling party which will play out at government level.

This is not only about the rivalry between two ANC factions revolving around Ramaphosa and Zuma. It is whether a neoliberal free market-orientated economic policy that has been in place for many years prevails or whether the government moves towards an alternative approach that puts the country on a social democratic trajectory at least.

As things stand the ANC is wedded to the former economic system and President Ramaphosa is quite likely to stick to that arrangement. Those SACP members who have made it to Parliament on the ANC list, including those who will be appointed as ministers, will barely be able to change that policy and in any effect will be hobbled. An independent SACP bloc within Parliament, however, and crucially linked to a broad-left socialist movement at the grassroots, voices and demands raised in concert, would have an immense influence on the ANC and government positions. Far more than with the present nexus.

Jeremy Cronin agrees “that the price the SACP has paid for focusing on the struggle within has often run the risk of being over-focused on palace politics. I agree that there is a socialist policy, ideological and even moral vacuum in the mainstream of politics in South Africa. I agree with Kasrils that the SACP has an important responsibility to address this vacuum, without imagining that the SACP has exclusive copyright in this regard.”

So how do we move forward in this endeavour?”

Well, whether I am right or wrong, too optimistic about the role that SACP might have played in this past election or not, at least I have prolonged the debate given that in 18 months’ time the local municipal elections will be held. The SACP made a half-hearted attempt to field candidates in a broad front for the 2016 elections and did not do well. I told deputy secretary-general Solly Mapaila at the time that they had left contestation and campaigning too late. I would encourage the SACP to look at the matter again and perhaps use those coming municipal elections as a testing ground.

In the main, however, what is required to revive the authentic socialist project in the country?

There has been, in recent years, the call for a broad-based united front for socialism led by the working class. Attempts have been made to move this forward, and in fact the SACP itself began a round of such discussions which petered out. There have also been attempts by those around Numsa to initially form a united front which then morphed into a worker’s party, the SRWP, which regarded a broad front for socialism as undermining the role of the working class. Their idea of a united front was ignominiously buried.

Perhaps their electoral failure will bring them around to a less sectarian approach? In fact, this alienated Zwelinzima Vavi and the new Saftu trade union and countless others. Cosatu and others were marginalised from the process, as were important sections of civil society organisation and a relevant number of revolutionary intellectuals and academics potentially able to play a positive role under working-class leadership.

No doubt sectarianism and egoism — the narcissism of small differences — are preventing the need for such broad-based serious discussion.

One is encouraged by Comrade Cronin’s pronouncements; as has been the case with Mapaila. Given the critical situation in the country and the appalling conditions of the unemployed and the poor, it is criminal to play at being a big fish in the small pond of one’s own constituency. If such obstinacy continues, South African Marxists and socialists will regret their prevarication.

The country will simply continue to decline politically, socially and economically while a small percent grow richer and the poor grow poorer. Not to mention the very possible swing towards right-wing populism, racism and demagogy.

Who will bell the cat? DM