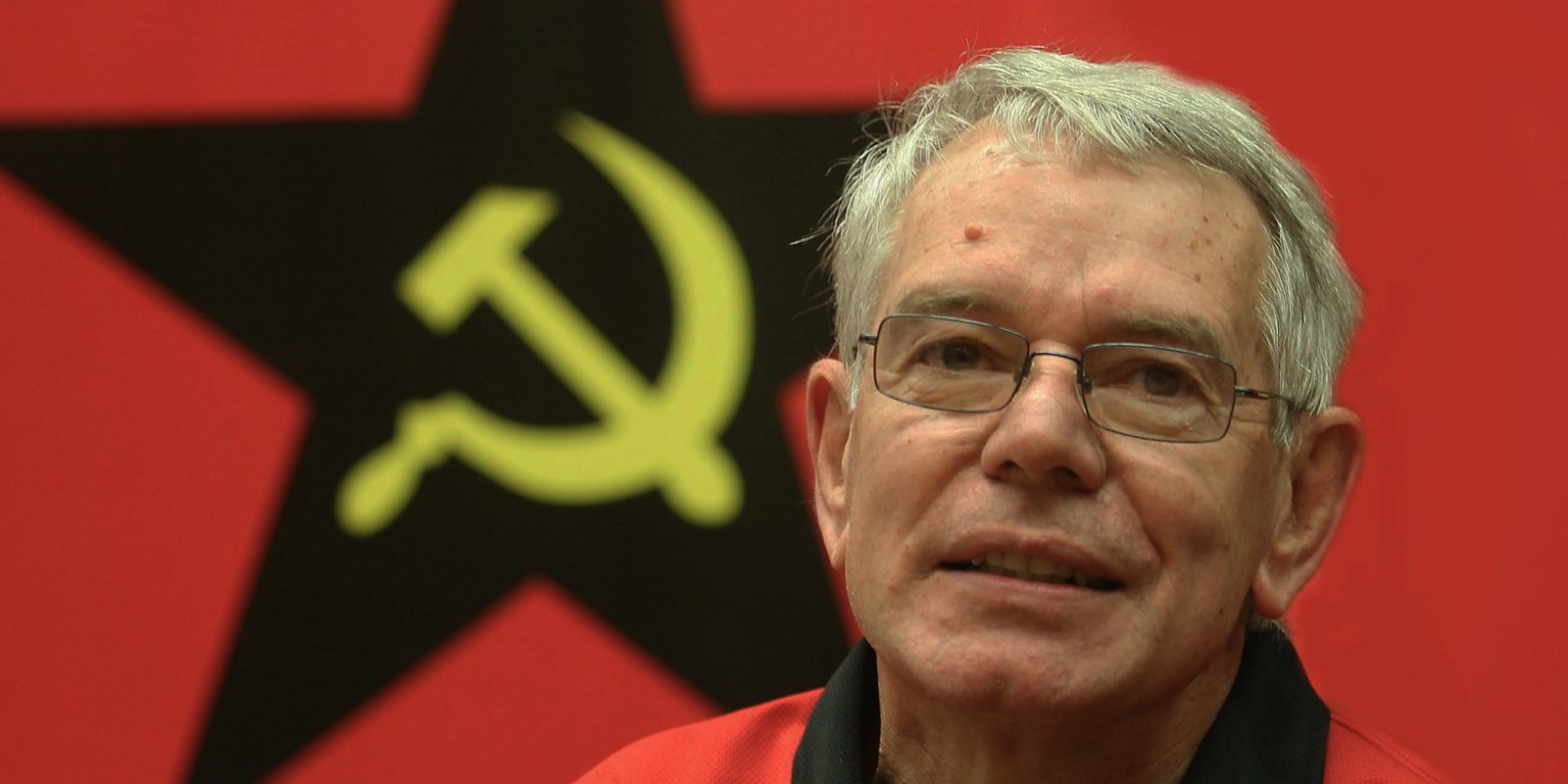 Deputy General Secretary of the SACP Jeremy Cronin at the 2nd Special National Congress, held at the University of Limpopo in Polokwane, South Africa in December 2009. Photo: Gallo Images/Foto24/Lisa Hnatowicz

In the wake of the Zuma years, it is naïve to believe it would have been possible for the SA Communist Party to run a principled but independent anti-corruption, pro-socialist electoral campaign in 2017-18 and still have an effective impact on the critical challenge of the time. That challenge was to pull the country and our hard-won constitutional democracy back from the brink upon which we were teetering in 2017 and early 2018.

In his iconoclastic but loving memoir, “My family and other communists”, David Aaronvitch, son of a former leading British communist, has a telling throwaway comment. Borrowing from Sigmund Freud, he suggests that too often left-wing debate, with its passions, factions and weaponised quotations from Marx and Lenin is often really just “the narcissism of small difference”.

So, for openers, let me say that there is much with which I whole-heartedly agree in Ronnie Kasrils’ Response to Jeremy Cronin (Daily Maverick, 20 May 2019).

Yes, we need to transition away from a world disorder driven by profit maximisation for a tiny few. We need to struggle for societies based on human needs and environmental imperatives. Yes, in Kasrils’ apt words, in our complex global and national context, socialists must be “creative, tolerant, open-minded, non-sectarian and non-dogmatic”. He adds: “We need to find a modicum of courage to question the old tired formulas, and creatively relate to the challenges of the current period.” Agreed.

I hope that this response to a response is conducted in exactly that spirit, avoiding a self-justificatory narcissism of small difference.

There are three apparently central (but in my view ultimately distracting) issues in contention in our debate. One, the role of the SACP from around 2005 on the Zuma question. Two, the role of the SACP in the gathering momentum in dislodging the Zuma-led State Capture network. And three, how should the SACP position itself electorally?

Unfortunately, excessive dwelling on all three is liable to churn the discussion around in “old tired formulas” in the service, perhaps, of self-justification. This would be at the expense of dealing with the more important question – how do we build an effective left within South Africa? This latter is not just, nor even primarily an election issue. But unless we have an honest and informed discussion on the first three issues, we are unlikely to lay the basis for approaching the more substantive challenge. So let me be as brief as possible on these.

On the first issue, Kasrils writes that the SACP leadership ignored his warnings about Zuma’s flawed character in the run-up to the 2007 ANC Polokwane conference. Not so. There were sharp differences on this matter within the SACP Central Committee (CC) on which Kasrils was then serving. There were also differences around the desirability of Mbeki being re-elected as ANC president.

At that stage Kasrils, as I recall, strongly supported Mbeki’s re-election along with several other CC members, most of whom happened to be serving ministers at the time. The pro-Mbeki grouping within the SACP leadership was in the minority. Zuma supporters were a majority. But there were also many SACP leading members who were neither pro-Zuma nor pro-Mbeki. On the eve of the Polokwane conference, the SACP issued a longish statement which explicitly did not favour either camp. But as many observers correctly remarked, the “body language” of key SACP leaders clearly indicated where they, and by assumed but incorrect implication the whole Party, stood. Both Blade Nzimande and Solly Mapaila have publicly acknowledged and regretted the support they gave to Zuma in that period, much as Kasrils has acknowledged his own misjudgments regarding the Mbeki era.

So, in the spirit of being tolerant, open-minded and non-sectarian, let’s all learn collective lessons. Let’s vigilantly guard against the temptations of personal opportunism. And let’s move away from the ultimately not very helpful exchange of “we told you so’s”.

With Mbeki’s loss at Polokwane and his subsequent ouster as state president in 2008, numbers of ministers, Kasrils included, resigned their cabinet posts. I would like to believe they did this as a matter of principle. Others close to Mbeki, notably Trevor Manuel, stayed on. Leaving aside my own ideological disagreements with Manuel’s policy perspectives, I believe he stayed on not out of opportunism, but to safeguard from inside government the country’s interests according to his own (and those of the powerful interests that back him) best judgment.

At this time, with Zuma ascendant, a similar if inverse predicament confronted many in the SACP leadership. Some, like Kasrils, drifted away from the party, despite urgings for him to stay on, which came, incidentally, from among others, Blade Nzimande. Others who had never been Zuma fans remained.

Of course, and Kasrils implicitly acknowledges this, in the South African context the struggle from within the ANC and ANC-led state and the struggle from without are both essential. We need to find better ways of making them complementary, as we did for a moment in a common struggle against State Capture in 2017.

Which brings me to the second issue in contention. What role, if any, has the SACP played in the struggle against the state-capture agenda?

In my original response to Kasrils it was not my intention to give the impression that the SACP alone played the decisive role in turning the tide against the Gupterisation of the ANC and the state. I expressly saluted, perhaps too briefly, the role of a wide range of forces. “Brave investigative journalists and whistle-blowers”, I wrote, “opposition political parties, faith-based formations (not all of them), the judiciary, social movement mobilisation, the business community (not all of it) and many more played major roles.” All of this is well known. And, yes, I could certainly have added specifically the role of the former public protector, Thuli Madonsela.

I could also have mentioned by name some of the whistle-blowers, whose courage proved to be turning points. Mcebisi Jonas, for instance – who, by the way, can attest to the role the SACP consistently played in the internal battles in government and parliament in supporting him. So, yes, I do insist that there were important moments when the struggle from within the ANC movement was absolutely critical in achieving shifts that could not have been done from outside of government. The SACP played an important role in some of these moments.

Which brings me to the third point in contention with Kasrils – the SACP’s electoral stance. Basically, Kasrils is arguing that at the SACP’s July 2017 congress or, at the very least, after the ANC December 2017 conference, the party should have chosen to contest general elections independently, and therefore effectively placed itself in opposition to the ANC, as a strong socialist voice, with the intention of supporting the ANC post-elections. There has also been strong advocacy for this position from within the SACP and the way forward electorally continues to be legitimately debated in our ranks.

In my own view, it is naïve to believe it would have been possible for the SACP to run a principled but independent anti-corruption, pro-socialist electoral campaign in 2017-18 and still have an effective impact on what was the absolutely critical challenge of the time. That critical challenge was to pull the country and our hard-won constitutional democracy back from the brink upon which we were teetering in 2017 and early 2018. The idea of a comradely electoral contest against the ANC, with a gentlemen’s agreement about a future kiss-and-make-up coalition after the votes had been counted, was simply naive. Remember, this was a period in which there were over 20 intra-ANC assassinations, including of SACP members. Local SACP cadres would have been banned from participating in their own ANC branches, weakening the many non-SACP honest ANC cadres and supporters.

The pro-Zuma axis would have dominated the ANC process even more. The ANC 2019 election results would have dipped it under 50%, and the Zuma-ites would now be rushing to form coalitions with their fellow, right-wing populists in the EFF leadership.

Fortunately, we are now in a somewhat, although not entirely, different space. Yes, I agree with Kasrils that the price the SACP has paid for focusing on the struggle within has often run the risk of being over-focused on palace politics. I agree that there is a socialist policy, ideological and even moral vacuum in the mainstream of politics in South Africa. I agree with Kasrils that the SACP has an important responsibility to address this vacuum, without imagining that the SACP has exclusive copyright in this regard.

So how do we move forward in this endeavour? Hopefully, that can be what we now begin to discuss collectively without getting sucked into an endless to-and-fro of we-told-you-so’s rooted, perhaps, in a narcissism of small difference. DM