Manifestos: Where are the Children? 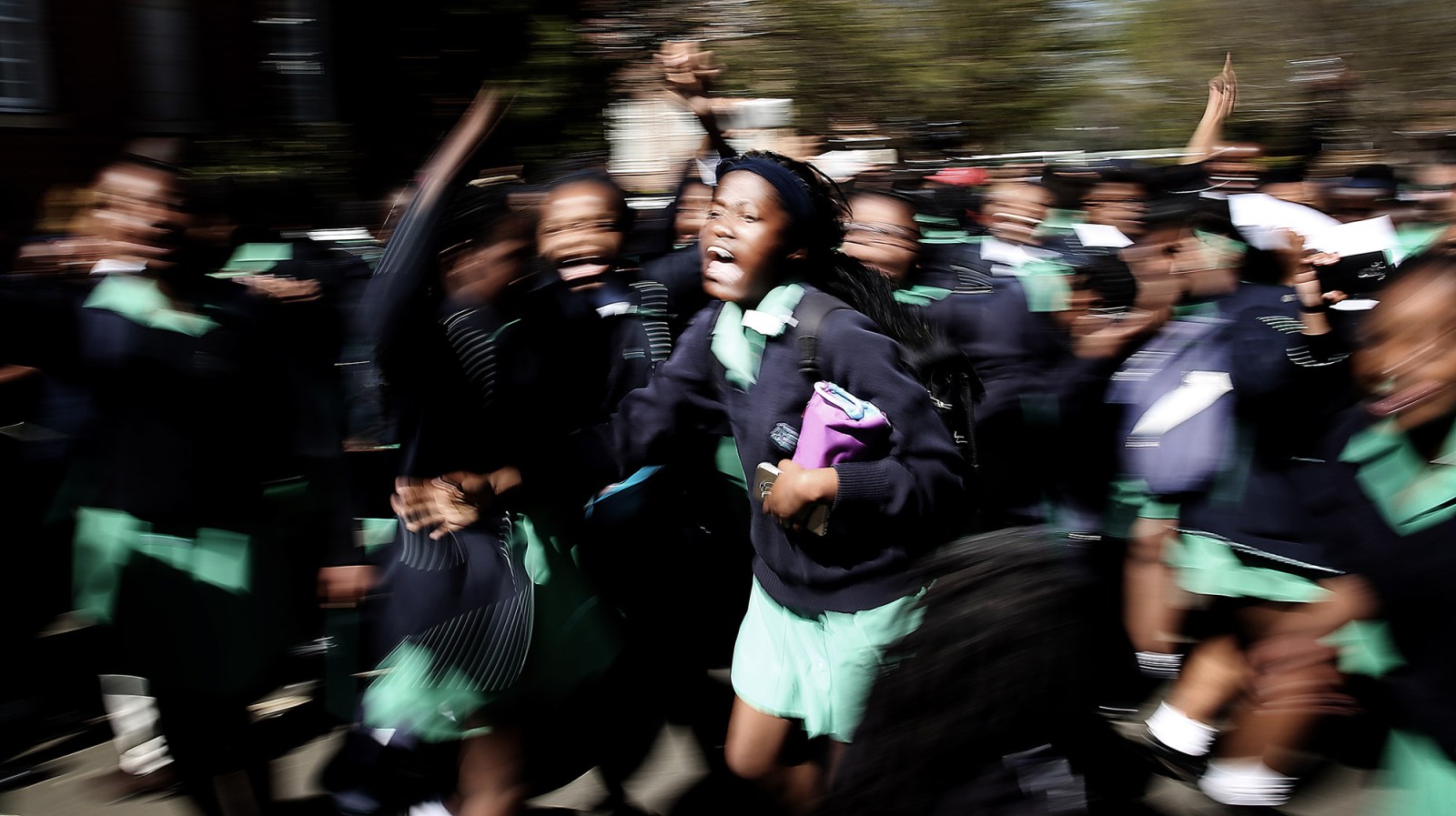 PRETORIA, SOUTH AFRICA ñ AUGUST 29: Pretoria Girls High School pupils during protest against alleged racism and intimidation at the school on August 29, 2016 in Pretoria, South Africa. There has been a huge social media outcry after pupils of the school reported that they were told their afro hair makes uniform look untidy and were barred from doing hairstyles that were inherently African. (Photo by Gallo Images / Sowetan / Alon Skuy)

While the manifestos may lack some depth in terms of speaking to specific issues affecting minors, citizens should hold their elected officials to high standards when it concerns those not yet able to participate in the elections process.

As South Africans make their way to the polls on 8 May, their decisions will impact not just themselves, but the 19.5 million children living in the country. However, the election manifestos of the main political parties lack sufficient practical stances on children’s issues. Under 18s are mentioned with regard to education and are broadly included in statements about gender-based violence, but the election promises are insufficient beyond this.

While children cannot vote directly, they do make up a third of our population and are undoubtedly influenced by political decisions, from health policies to crime prevention. In the run-up to the elections, there have been several examples of children being actively involved or represented in public life, such as an eight-year-old petitioning President Cyril Ramaphosa and comments to the United Nations Human Rights Council (UNHRC) about the youth having the right to peaceful assembly.

Child protection consultant Dr Joan van Niekerk analysed election manifestos of eight main parties and found a significant lack of holistic, practical interventions. Van Niekerk says “we should be very concerned about that because politicians glibly talk about children as our future, but then do not in actual fact make any provisions for that future that are reasonable and meaningful to children”.

This is important not just because policies directly affect children, but because they should be recognised both by voters and political parties as “the voters of tomorrow” who need to be equipped to make responsible decisions.

Comparing parties, Van Niekerk found that the EFF makes many visionary statements that raise expectations. She is concerned that while these “very broad generic statements” around change are commendable in themselves, the party does not offer practical solutions as to how these would be realistically funded, apart from raising taxes.

She says the ANC manifesto has some mention of children but “few specifics as to how broad promises will be kept”. The DA has the most practical examples of how to address problems, although this relates to the way its manifesto is written in general, not just in terms of children’s issues. Van Niekerk notes that some of the smaller parties mention children more by extension than directly.

Zita Hansungule from the Centre For Child Law at the University of Pretoria looked at the manifestos of the ANC, DA, and EFF. She notes a focus on crime prevention, including specifically against vulnerable groups, and increased access to social security programmes by all three. However, the manifestos were lacking in comments on key areas such as access to education for vulnerable groups — pregnant learners, children without birth certificates and children with disabilities.

Understandably, all the manifestos mention children when calling for quality education. Some, such as the ACDP and the IFP, emphasise early childhood development, while affordable or free education is promised by several others, such as the ANC and the EFF. There is also a trend of calling for more digitally advanced education, such as Cope’s manifesto promising a “world-class curriculum that is relevant to the 4th Industrial revolution (sic)”.

The EFF extensively focuses on providing services in schools that impact minors in broader ways. The party promises scholar transport, “two nutritious meals a day”, flushing toilets and remedial teachers in all schools. Van Niekerk finds that these issues are valid, but there needs to be a wider focus on the wellbeing of children so that they can take full advantage of the education offered them.

A greater focus on social services for children would assist with this more holistic approach. Van Niekerk is highly concerned by the DA’s plan for a combined health and social development ministry, since this may divert funds from social services. She also emphasises that the social services provided for pregnancy and infant care should be expanded to include fathers more, as this will likely strengthen the bond and create an increased sense of responsibility towards the child.

Hansungule adds that there is a lack of comprehensive solutions in terms of social security for orphaned children and suggests that they should have access to larger grants than the child support grant.

“The foster care system has been in crisis for a number of years, therefore impacting access to the foster child grant for thousands of children.”

The safety of children is generally lumped together with calls in the manifestos against gender-based violence. The ANC’s national plan of action against gender-based violence does focus specifically on root causes and Ramaphosa emphasised in his manifesto launch speech that “it is important that children learn from a young age to respect one another as equals and not to resort to violence in situations of stress and conflict”.

This is not a simple objective since Van Niekerk says that research is showing that being exposed to violence has a significant impact on children.

“We need to have a very specific focus on children not just as the direct victims of violence, but also children who watch violence happening in their own homes, because they are also seriously harmed.”

Hansungule says there should be a “strengthening of the care and protection system to ensure that incidences of abuse, neglect and violence are dealt with early or prevented”. This could be done through improved implementation of the Child Justice Act to ensure that children are adequately supported when encountering the criminal justice system.

Children are not directly included in election promises about the economy, although some of the statements around jobs do affect young people. The ANC commits to public-private partnerships to create jobs for youth, while the DA plans on “introducing a voluntary national civilian service year” that would give secondary school graduates job experience.

Hansungule emphasises placing children’s issues higher up in the government structure and suggests that this could be helped by creating an overall children’s budget. She calls for the “creation of an environment conducive for the development of all children”.

She says there is a need for improved data collection about children’s experiences and barriers because this would better inform parties and the government about where priorities should be placed and what policies and laws would be most effective.

While the manifestos may lack some depth in terms of speaking to specific issues affecting minors, citizens should hold their elected officials to high standards when it concerns those not yet able to participate in the elections process.

Van Niekerk says aptly: “Our votes should be child-protective.” DM