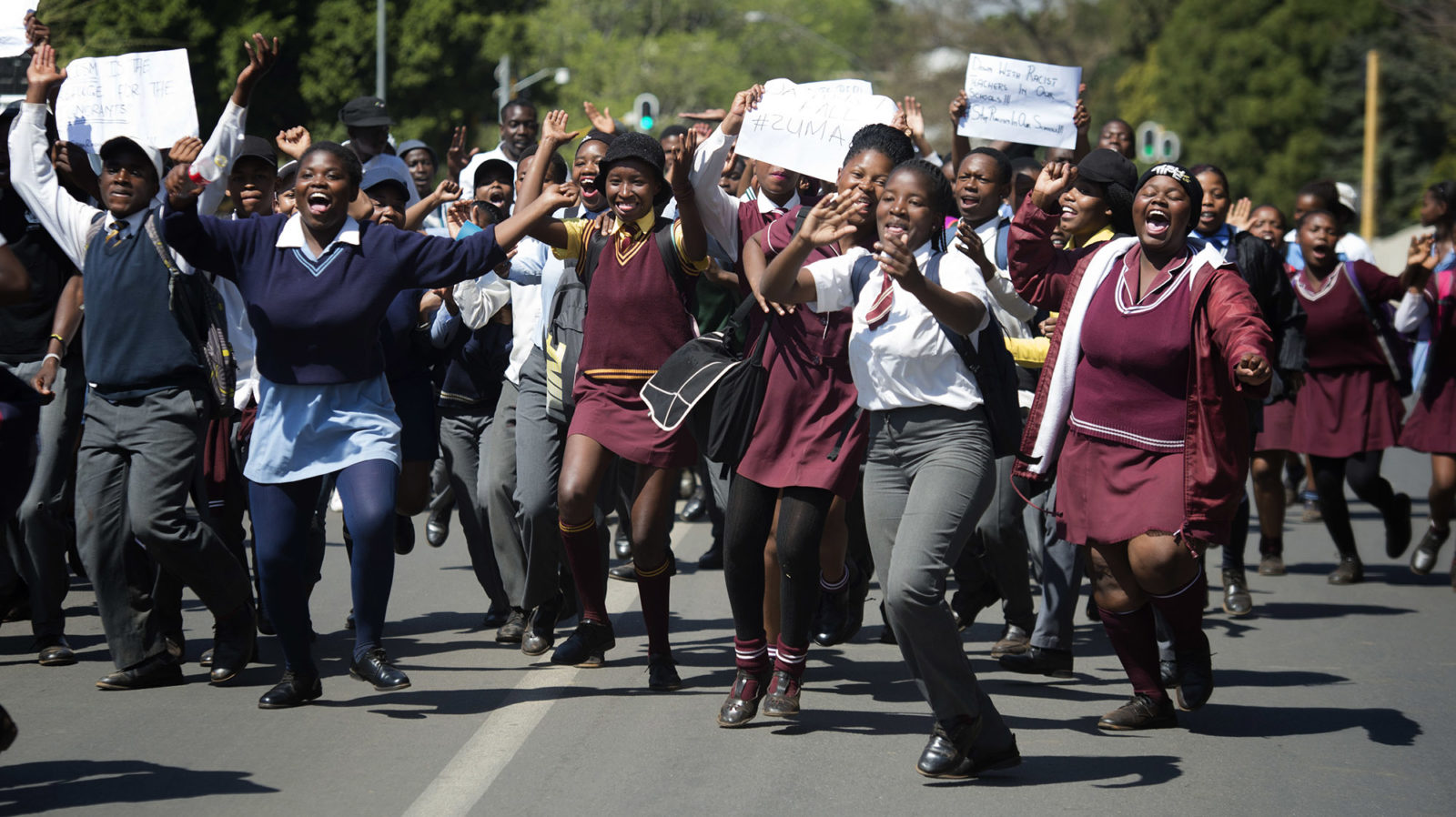 Pupils from different schools protest outside the Pretoria Girls High School entrance in support of a revolution against alleged racism and intimidation at the school on August 30, 2016 in Pretoria, South Africa. (Photo by Gallo Images / Beeld / Deaan Vivier)

The right to freely assemble, demonstrate and collectively express our views is vitally important in any democracy. In South Africa, historically and at present, this right is for many citizens the most accessible means to collectively express their demands, concerns or anger on the issues of the day. However, as a society, we underestimate the importance of this right to our children.

Unlike adult citizens of South Africa who will be eligible to vote in the elections on 8 May, children cannot vote. This critical avenue by which to exercise their political power and express a political view is closed to them. This is why the ability to assemble and demonstrate is an important way in which children participate in the political life of society. The Constitutional Court has recently affirmed that “by virtue of their unique station in life, the importance of the right to peaceful assembly has special significance for children who have no other realistic means of expressing their frustrations”.

The Equal Education Law Centre will this week demonstrate to the United Nations Human Rights Committee (UNHRC) why children and youth should always be given consideration when giving consent to the right to peaceful assembly. The UNHRC will be meeting in Geneva, Switzerland, to discuss and develop a “general comment” on Article 21 – the right to peaceful assembly in international law – as contained in the International Covenant on Civil and Political Rights (ICCPR). A “general comment” provides guidance to State parties on the interpretation and implementation of international treaties.

In South Africa and across the world, child activists use peaceful assembly as a way to raise their voices on issues that particularly affect them. For example, over the last decade, high school members of Equal Education (known as Equalisers) have used marches, pickets and other public demonstrations to bring attention to problems in the South African education system. On Friday, 15 March 2019, children across the world held public demonstrations against climate change under the #GlobalClimateStrike initiative.

International law specifically recognises that children have the right to protest. Article 15 of the Convention on the Rights of the Child does so globally; while Article 8 of the African Charter on the Rights and Welfare of the Child does so for our continent. In line with these treaties, the EELC recommends that the UNHRC specifically recognises the importance of children’s right to peaceful assembly when drafting the general comment that it intends to issue.

The EELC will also urge the UNHCR to emphasise that governments have a duty not to limit or interfere with the right in any way and that governments be reminded of their obligation to consider the needs of children in developing laws or policies to regulate the right to peaceful assembly.

Many governments impose cumbersome administrative measures on organisers of protests and demonstrations. These include measures to request permits or notify authorities of plans to march. While there is some public benefit to these measures, they are also hurdles which children, in particular, struggle to clear. These measures are also easily abused to shut down protests to protect the powerful from legitimate criticism. For this reason, EELC will urge the UNHRC to indicate that governments should ensure that administrative measures facilitate and enable the right to protest and that such measures must be child-sensitive.

Criminalisation and the use of force is a reality many child activists face when they decide to organise protest marches or other demonstrations. In the experience of the Equal Education Law Centre, it is not uncommon for children who peacefully assemble and protest to be faced with traumatising police aggression, including threats of arrest and teargas. In light of the lasting effects of this trauma on children, the EELC will also urge the UNHRC to explicitly state in the general comment that governments should avoid criminalisation of peaceful assemblies generally, and especially those organised by children.

By emphasising children’s right to peacefully assemble, demonstrate and protest, South Africa’s Constitutional Court has affirmed an important element of the development of children’s civil and political rights. Through taking this important victory to the United Nations, a potent tool for democracy in the hands of children can be strengthened. DM

Mbekezeli Benjamin is a human rights lawyer at the Equal Education Law Centre.