Writing the 2019 Elections: South Africa has a clear choice between progress and chaos 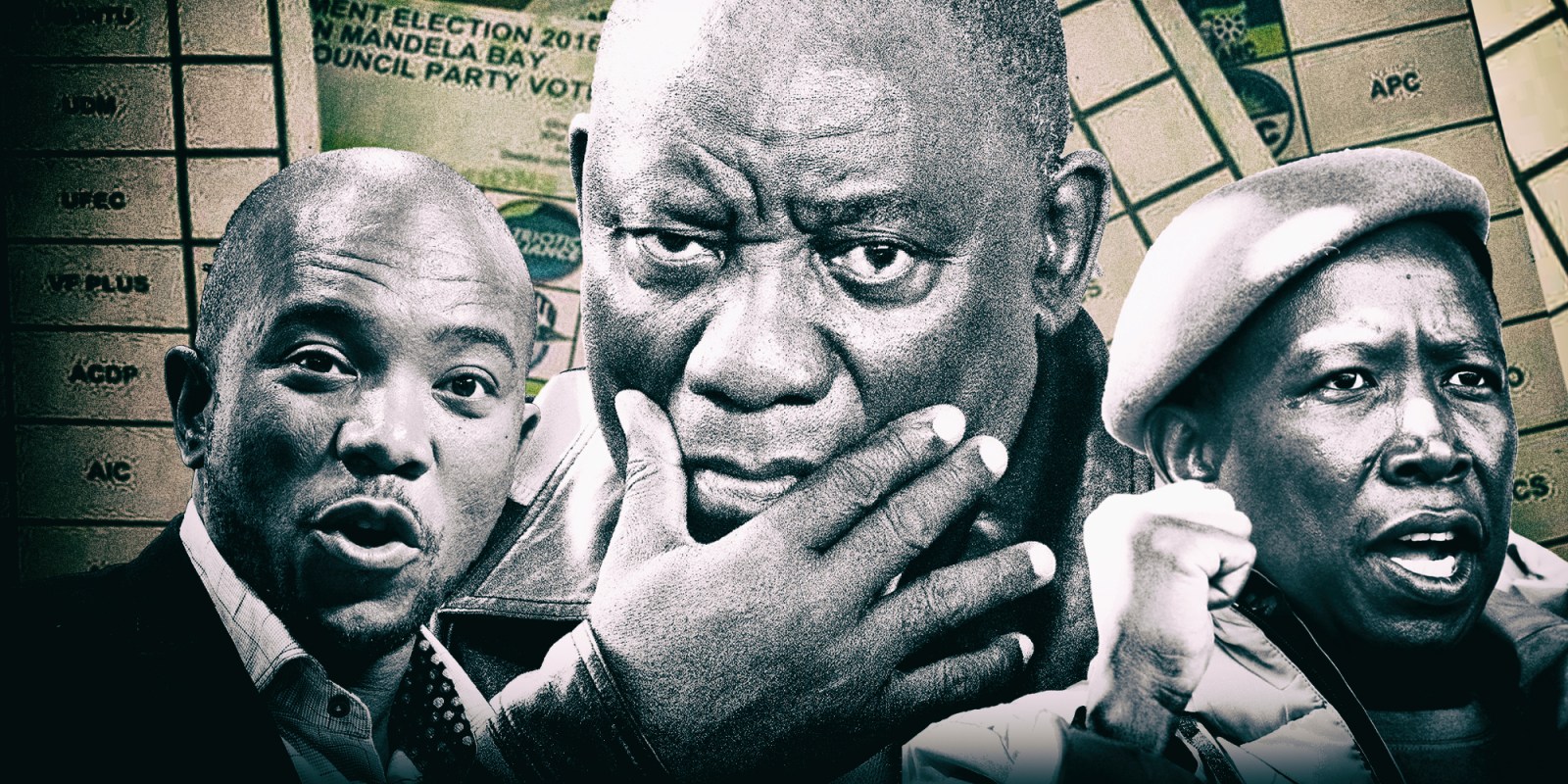 The question of trust is key. It has to do with the integrity of the next president, coupled with capabilities, credibility, perception, and various forms of capital to effectively lead South Africa out of the incredible omnishambles of the past 10-12 years. To understand this, you would need much more than that which can be quantified or explained rationally. It requires a leap of faith, with a firm grip on problems that beset the country, the region, the global political economy — and a deep well of power to beat the resistance to progressive change.

At the time of writing, South African voters have less than 36 hours to decide on whom to elect as their next candidate to lead government, and which party would represent their interests in the country’s national and provincial legislatures. Even more so than Daily Maverick reported earlier in 2019, it has come down to personalities. It is, now, down to which of the Big Three leaders is most trustworthy: Cyril Ramaphosa, Mmusi Maimane, Julius Malema.

The question is this: Which of the three do you trust to lead South Africa deeper into times of global instability and uncertainty; of domestic social upheavals (sporadic land invasions or public service delivery protests); of political economic and financial risk (because of breaks in electricity supply); rampant crime and rising fear accompanied by a drop in confidence in the justice system; of systemic corruption; of the persistent threat of state failure; and a growing list of charges, accusations, indictments and complaints against political leaders? All things considered, the answer is Cyril Ramaphosa. Let us run over some ideas, and how this conclusion was reached.

Trust and everything that goes with it

The question of trust is key. It has to do with the integrity of the next president coupled with capabilities, credibility, perception and various forms of capital to effectively lead South Africa out of the incredible omnishambles of the past 10-12 years.

All of this starts with an honest and reflexive diagnostic on the state of public policy, experienced and respected policy-formulation, courageous implementation and monitoring and evaluation that are untrammelled by party-political or ideological rigidities.

Whoever leads the country over the next decade has to restore the country’s standing and the moral authority, the hope and promise of the Mandela and early Mbeki era had in Africa, in the global political economy and the institutions and organisations on which the multilateral system rests, while addressing the burning (sometimes quite literally) domestic social and political-economic problems.

The state has to be professionalised with an intense focus on capabilities. The state has to be cleansed of public servants who sit around and do nothing, sit on social media, who owe fealty to political leaders and who in the first place secured their jobs without being appropriately qualified or adequately skilled.

All of this has to be done while inquiries and investigations into State Capture, maladministration and low and high levels of corruption proceed towards the prosecution and possible prison sentences. There will be resistance from what is sometimes referred to in Turkey as the derin devlet or “deep state” a loose affiliation of deployed cadres across the state, including (especially) the intelligence service, public enterprises and functional intellectuals who serve functionaries of interest groups and parties; some performing as “revolutionaries” or “fighters”, others as 9-5 labourers for “economic justice” — all of whom have made fulsome gains since Polokwane in 2007. Those that that now make up the core of the derin devlet are essentially the second-wave cadres deployed after Nelson Mandela’s presidency.

One danger that lurks, and that we have to keep in focus, are the intellectuals who are part of populist surges around “radical economic transformation,” nationalisation of the South African Reserve Bank and land appropriation without compensation that smack of rapine and revenge.

These intellectuals generally play the relatively uninterrupted role of agents provocateurs, string-pullers, academic advisers and sponsors of otherwise meaningless educational rewards and certifications. While we may consider some of these populist positions as nominally progressive, it is difficult to ignore the umbilical links these organically linked intellectuals have with the rowdy romantic idealism of the revolutionaries and populists, and the almost ecclesiastic role they play.

It is not too great a conclusion to reach that Ramaphosa is better placed (than Malema or Maimane) to achieve all of the above. His work as deputy chairperson of the National Planning Commission demonstrates his understanding of the complex and highly intersectional nature of the problems that beset the country.

As president of the country has also shown his hand with the direct interventions he has made to clean up the state and public enterprises after he replaced Jacob Zuma. Given that South Africa is part of the global political economy (just restating that is bile-inducing, but it is worth doing) and the traction and respect he enjoys in the world — notwithstanding the foetid ogres in the party that he presides over — works in Ramaphosa’s favour.

A very brief overview would show that soon after he replaced his predecessor, Ramaphosa dropped 13 Zuma loyalists from the Cabinet. He also replaced the boards of several state-owned enterprises and appointed new leaders to key state institutions such as the National Prosecuting Authority and the South African Revenue Service.

While Maimane would probably continue some of the improvements that Ramaphosa started, and that the ANC leader has pledged for the coming period, the DA leader does not seem to have the gravitas, nor does his party have the stated commitment to sustain the commitment to the transformation of society — beyond what liberal orthodoxy would allow. It is unfortunate that the DA remains fixated with the idea of meritocracy, which is usually blind to historical and structural inequities.

For better or for worse, the DA’s white base will be the weak spot that everyone will prod and press. This weak spot will come under relentless pressure from the derin devlet (deep state) who would, from the inside, resist changes — especially reduction of the state’s wage bill and professionalising the public service.

From the outside, populists would rework the emotive exhortation to “cut the throat of whiteness”; there would, quite possibly, be increased attempts to remove black people regarded as “coconuts” or its female leaders as “tea girls” — as Malema so ineloquently identified the former DA leader, Lindiwe Mazibuko. In short, the DA will not be allowed to govern — whether you like their policies or not, whether or not they bring measurable improvements to the lives of people.

Malema has growing support, notwithstanding his rhetoric of revenge, violence and scapegoating. While he has insulted very many people inside the country — from journalists to politicians and public officials — he has “directed his venom” toward President Edgar Lungu, the Zambian Head of State, referring to him as a coward.

Malema’s politics of revenge, rapine and racial scapegoating is well documented. Probably the lowest point of his frequent tirades was during a live radio broadcast during which he threatened to “put two tyres” on a caller to the radio station. The “necklace” is a reference to barbaric murders made famous by South African activists in the 1980s, when a car tyre, filled with petrol is placed around a person’s chest and arms, and set on fire.

In any democratic society governed by a republican constitution, Malema would remain far outside the periphery of politics. Notwithstanding his politics of revenge, violence and support for almost biblical punishment — where children have to be punished for the sins of the fathers — he has growing support, even among the most respected of public intellectuals and respected figures in society.

This may be a clue to what seems like violent racial scapegoating, politics of revenge so well represented in history by Benito Mussolini and Idi Amin — a particular type of crypto-fascism that lurks immediately below the surface of the most respected South African politicians. With the support of “tactical voters” — who profess non-racialism, constitutionalism and democracy by day — Malema may get a lot of support at the moment when South Africa does not need someone so obviously dangerous to society.

It is on the basis of Maimane’s weaknesses and the dangers that Malema represents, that a strong vote for Ramaphosa may provide South Africa with the leadership it requires for the next decade. There are two important caveats.

First, Ramaphosa may have to survive a palace coup and “redeployment” in the coming weeks and months while he rids his party of the seedy, odious and criminal types. Second, he has to steer clear of any coalition with violent populists such as Malema.

At this stage, I would insert an informed opinion. It may not be obvious, given his dapper, debonair and generally savoir faire persona, but Ramaphosa is an African nationalist, and for that reason alone he could incorporate Malema in the ANC’s future.

It is not too grand a declaration to make that South Africa does not have another generation of time and people to implement policies that start with taking the country back to year zero — the way that most African countries started out (and are now trying to correct), and that Pol Pot and Mao Tse Tung went about restarting their societies. It is at that stage when everyone who will go to the polls on Wednesday, will regret that they voted for Ramaphosa. DM