Writing the 2019 election: The rise of the personality cult 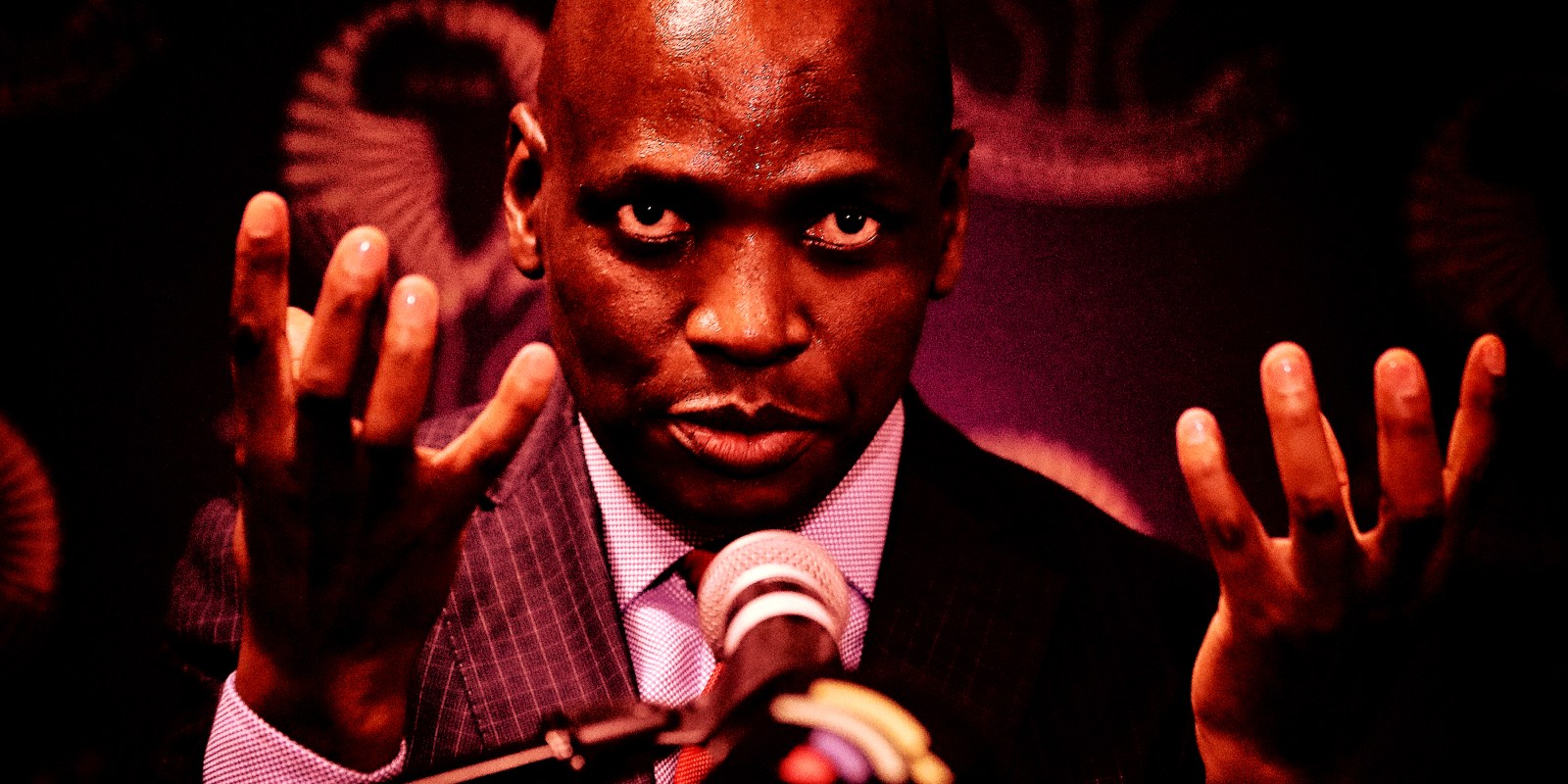 The EFF and Hlaudi Motsoeneng’s ACM demand absolute loyalty to ‘the leader’ and the party. The EFF constitution demands a ‘vow’ of absolute loyalty from all members, and all individuals are ‘subordinate to the majority’. This is in line with Motsoeneng’s recent statement that democracy in his party was ‘limited’ and that he makes all the decisions.

There has been an increase in the politics of personalities, and the formation of cults around political leaders. Smaller parties, four of them new, and the EFF have presented the electorate with prominent leadership figures and will hang the immediate future of their parties on these personalities. For the ruling ANC, too, the election has become a lot more about Cyril Ramaphosa than it is about the party. In fairness, the ANC is less of a cult, than say, the EFF, Hlaudi Motsoeneng’s African Content Movement, or Andile Mngxitama and the Black First Land First Movement (BLF).

Motsoeneng, the EFF’s Julius Malema and to a lesser extent, Mzwanele Manyi who has joined the African Transformation Movement, and even less so, Patricia De Lille, who started the Good party in 2018, are all strong personalities within their respective parties. It’s different with the EFF. Malema is, arguably, the EFF and the EFF is Malema. It is in a populist sphere of its own.

The EFF has already declared that Malema’s face will be displayed on all election material across the country, whether for a provincial or national government. This is reminiscent of the way that populists, fascists and dictators create a personality cult. Mussolini’s face was all over Italy during his time, and in North Korea, images of the Kim family dominate public and private spaces. The EFF is the cynosure of the personality cult of populist movements. Let’s get some of the historical and definitional issues out of the way before we move on to the small parties and the 2019 election.

The rise of the personality cult

The idea of the personality cult, as applied to politics of the past 100 years or so, typically refers to non-democratic regimes or movements that promote an idealised image of a leader and generate personal worship of the said leader. The stand-out examples of personality cult leadership of the past 100 years have been Benito Mussolini in Italy, Joseph Stalin and Vladimir Lenin in the Soviet Union and Adolf Hitler in Germany.

In South America, there was Juan Perón of Argentina, Álvaro Uribe Vélez in Colombia, François Duvalier in Haiti and, of course, Fidel Castro in Cuba.

In Africa, there have been Gamal Abdel Nasser in Egypt, Gnassingbé Eyadéma in Togo, Mobutu Sese Seko in what was Zaire. In the Middle East and Western Asia, there were Ayatollah Khomeini in Iran and Saddam Hussein in Iraq. There have, of course, been many others.

There is a strong case to be made that Donald Trump arrived in the US presidency on the wave of a strong personality cult that swirled around him. Not all personality cults are bad — Mustafa Kamal Atatürk, Nelson Mandela, and Jawaharlal Nehru were exceptional leaders during difficult times for their countries, but when mixed with populism and autocratic leadership, they become a toxic brew. We have already seen how Trump channelled Stalin with his attacks on the media — something which Malema has adopted.

Nonetheless, in modern politics, we first come across the explicit term in Nikita Khrushchev’s address to the Communist Party of the Soviet Union’s 20th Party Congress in 1956. Khrushchev used the term to explain how Stalin’s consolidated his personal dictatorship, abused his power, all of which amount to mass adulation. In Russia, and in some former states of the Soviet Union, Stalin is still revered.

The personality cults of Malema and Motsoeneng

In the run-up to the 2019 election, Motsoeneng and Malema stand out for the personality cults around them. This is evident wherever the two go. Each has his own praise singers, and a retinue that makes sure “the leader” is “respected”. In keeping with the tradition of personality cults, where leaders are celebrated in rituals of sloganeering and songs, the EFF sings the praises, quite literally, of Malema.

Malema’s EFF and Motsoeneng’s ACM demand absolute loyalty to “the leader” and the party. Section 4, Clause 2 of the EFF constitution specifically demands a “vow” of absolute loyalty from all members, and insists that individuals are “subordinate to the majority”. This is homologous with Motsoeneng’s recent statement that democracy in his party was “limited”. It is also perfectly in keeping with despots, autocrats and dictators across history, who demanded absolute loyalty.

In an interview, Motsoeneng said in an interview published on 16 January: “I am the one who takes responsibility on all matters. Everyone can come with their views, but if I do not believe those views will take us to heaven and transform South Africa, I say no. I allow democracy to prevail in my party but where I believe this one is not doable, I take the final decision.”

Malema, the EFF’s Commander in Chief, and other leaders of his party have been accused of undemocratic behaviour and abuse by party members (See here, here and here). This, too, is consistent with populist, autocratic and dictatorial leadership. The EFF’s constitution is clear that it wants to establish a “dictatorship of the people”. It is this blend of populism, autocratic behaviour and dictatorship that makes personality cults so odious.

The ACM is a very small party, led by a short man with a very big ego. Motsoeneng is, actually, harmless. If he does make it to the presidency, as he promised, I will wear a Springbok rugby jersey in public. Malema is an entirely different prospect. The EFF is a small party led by someone who is larger than his organisation. There is a chance that it will double its seats in Parliament. I will keep wearing my All Blacks jersey, thank you.

The Freedom Front Plus, Cope and Agang are all small political parties with a democratic ethos within their structures, and they generally play by the rules and let their politics or policy positions speak louder than their leaders.

If he were not such a spent force, Mangosuthu Buthelezi would be among the personality cult leaders. For decades, Buthelezi was the Inkatha Freedom Party. He and Inkatha are, however, mere shadows of their past. De Lille seems more organic as a leader, and less obsessed with her own personality; certainly less than Malema and Motsoeneng. In fairness to him, Manyi has no delusions of grandeur, but he does like the sound of his own voice.

In sum, then, leaders such as Mandela held significant status as personalities. Manyi and De Lille are smallanyana personalities. Buthelezi is not the force he once was. Ramaphosa has brought great expectations to the country, but the ANC has yet to fall in line behind him. The Democratic Alliance has Mmusi Maimane and Helen Zille who seem to trade places in the personality stakes, but the liberals don’t seem to have a personality cult around its party’s head.

For now, we have to deal with the competing personality cults of Motsoeneng and Malema. The former is like a bad itch that will not go away, and the latter has the power to make his party and the country’s future about himself. This is the power of personality cult politics. DM