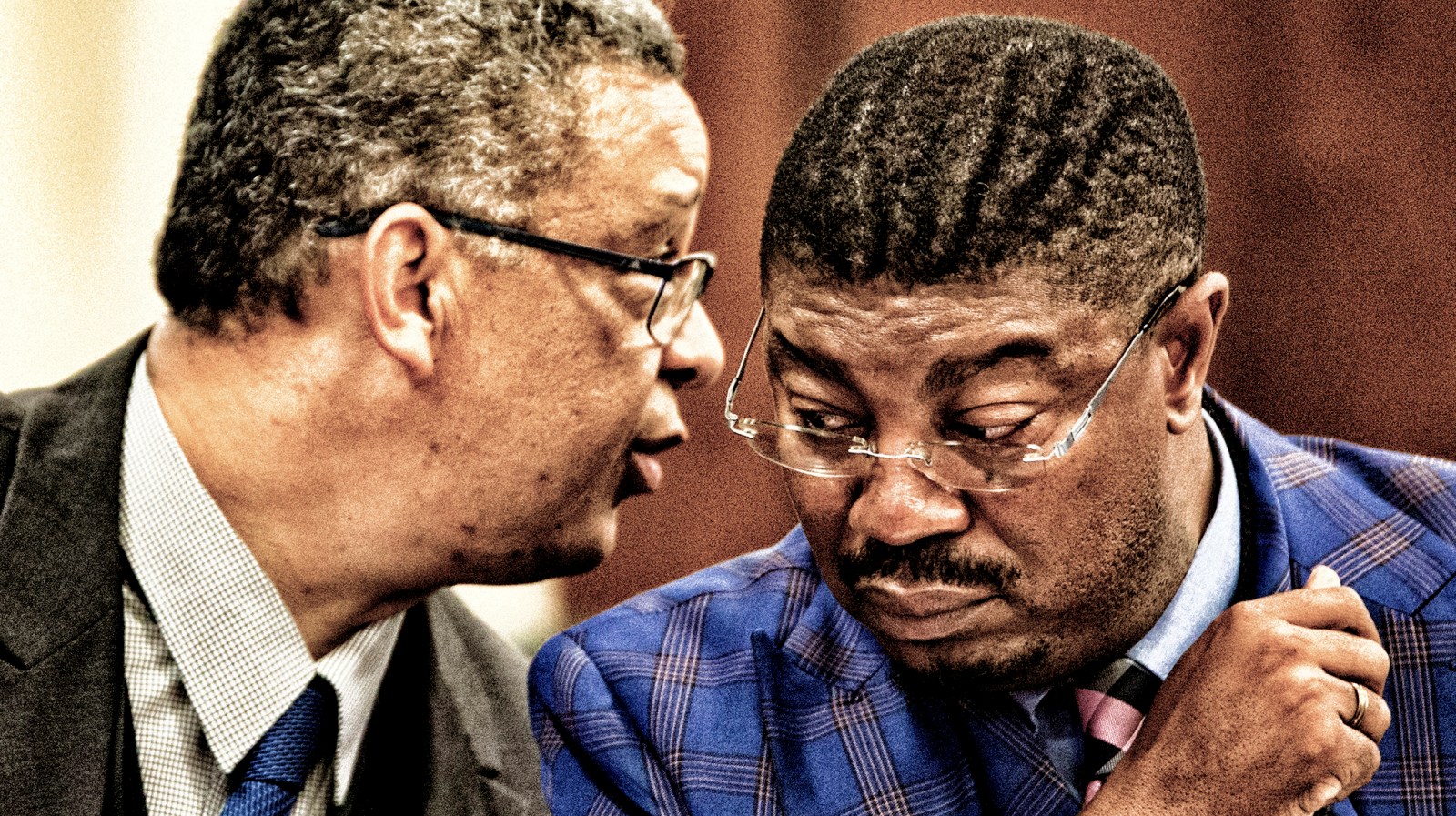 Robert McBride and Matthew Sesoko at the Portfolio Committee on Police in Parliament. The briefing was by the Independent Police Investigative Directorate on high-profile cases and progress report on Marikana investigations, 29 March 2018. Photo by Leila Dougan

As it developed, the criminal capture of the South African state during the Zuma years sprawled and stretched across almost every government institution, department and State-owned Enterprise.

Pointsmen and women were deployed to ensure that former president Jacob Zuma and the State Capture project were protected, at all costs and at every turn.

Those drawn into the vortex included private legal firms such as Hogan Lovells and Werksmans (paid for by public funds), in what appears to be a page taken from the SARS capture playbook exposed at the Nugent Commission of Inquiry into Tax Administration and Governance at SARS.

On Monday 15 April, Zondo Commission evidence leader, Paul Pretorius, apologised to the commission for the amount of detail that would be examined in the meticulous drilling down into evidence.

This particularly in relation to a Werksmans attorneys’ report, commissioned in 2015 by former Minister of Police, Nathi Nhleko, into what has become known as the “Zimbabwe rendition” case which took place in 2010/11.

The “Zimbabwe rendition” matter was used by Nhleko to remove then Hawks head Anwa Dramat in December 2014. This shortly after Dramat had called for sensitive DPCI investigations into high-profile politically exposed persons, including Zuma, to be centralised under his office.

Nhleko later illegally appointed Berning Ntlemeza in Dramat’s position, an appointment that was struck down by the Constitutional Court.

“First we have to show in detail what did occur. What is beyond doubt is the lack of action on the part of law enforcement over the last 10 years and which is central to the inquiry that you must make,” Pretorius told chair Judge Raymond Zondo.

Pretorius added that evidence to the commission “is critical to the terms of reference to understand what happened and why and how it can be prevented from happening again”.

The raison dêtre for the Zondo Commission, which has held the nation in horrified thrall for over seven months since first sitting in August 2018, is that Thuli Madonsela recommended its establishment in her damning 355-page 2016 State of Capture report.

For over a year Zuma tried to wriggle out of the Public Protector’s coils.

First, he challenged Madonsela’s remedial action and later also attempted to wrestle control of the process claiming that only he, as President of the Republic of South Africa, could appoint the judge to head the commission.

Madonsela, in her last report as Public Protector, had recommended that Chief Justice Mogoeng Mogoeng appoint the judge as Zuma was compromised and conflicted and clearly featured at the centre of her findings.

On 13 December 2017 a full bench of the North Gauteng High court ruled that Zuma’s application to have Madonsela’s recommendations reviewed was “ill-advised and reckless”.

The court also ordered Zuma to personally pay the costs of two applications – one an attempt to interdict the release of Madonsela’s report and the second to take it on review – and which amount to R10-million.

The ruling by the North Gauteng High Court in December 2017 came only a week before the ANC’s 54th elective conference at Nasrec where Zuma’s choice, his former wife Nkosazana, was defeated as leader of the ANC in a bitter battle, and by a slim margin, by Cyril Ramaphosa.

On 22 December, five days after his defeat at Nasrec, a politically-wounded Zuma launched an appeal of the 13 December 2017 Gauteng High Court ruling. In November 2018 the court dismissed Zuma’s appeal. He had to pay the R10-million.

Those whom Zuma had appointed, like Madonsela, Robert McBride and Anwa Dramat, and despite continuous malicious and vicious attacks, proved to be resilient and ethical public servants.

Others too will be testifying at the Zondo Commission and will no doubt, like McBride, set out the harrowing details of being targeted by those abusing state resources to protect Zuma and his associates and to cover up malfeasance and corruption.

With enough friends on his side and strategically deployed across the country, Zuma succeeded, for over seven years, to erode the institutions of government while ANC members in Parliament itself (as the ConCourt found) in turn acted unconstitutionally in failing to hold the executive to account.

Madonsela, the Zondo Commission will hear later, was part of an original, informal body known as the Engine Room, which had advised the newly-incumbent Zuma back in 2008/9.

Zuma would later appoint to key positions almost everyone who made up the Engine Room – including Madonsela, Nathi Nhleko (fingered as a key enabler at the Zondo Commission) and Riah Phiyega (appointed as National Police Commissioner in June 2012, two months before the massacre of striking miners by police at Marikana).

Also part of the Engine Room were Bonisiwe Makhene (who would go on to become Zuma’s legal adviser), her husband, SSA spy Yekani Monde Gadini (later implicated in setting up, at Zuma’s behest, a rival union to Amcu, WAU, at Lonmin), Glen Mashinini (a special projects adviser to Zuma and now chairperson of the IEC), Vincent Magwenya (later a spokesperson for Zuma) and Mandla Sithole NoZulu (who went on to become a special adviser to Police Minister Nhleko).

Robert McBride too was appointed in 2014 under Zuma’s watch, replacing former IPID head, Francois Beukman, an ANC member who was later to head Parliament’s police portfolio committee, which ultimately unanimously decided not to renew McBride’s contract in February 2019.

The State Capture commission spent at least six hours on Monday navigating its way through the details of two supposed IPID opinion reports, attached to a docket of evidence, provided by IPID to the NPA with regard to Dramat’s alleged involvement in the rendition matter.

On 12 April 2019, McBride testified that after his appointment as Executive Director of IPID in March 2014, he had requested a briefing of all high-profile cases the Directorate was investigating, including the renditions case.

Then acting national head of investigations, Matthews Sesoko, as well as then IPID acting Limpopo head, Innocent Khuba, had updated him on the renditions as well as the “Cato Manor case” involving KZN head, Major-General Johan Booysen.

“What was startling about both cases was that the docket had been prepared by Crime Intelligence and brought to the acting head of IPID, who then handed it to Mr Khuba to work alongside Crime Intelligence,” McBride previously testified.

Khuba, said McBride, had been instructed by former IPID acting head, Koekie Mbeki, not to report back to Sesoko, who was his superior at the time, but to Advocate Anthony Mosing, of the NPA’s Organised Crime Desk

(The Mokgoro Inquiry into the fitness to hold the office of former NDPP Nomgcobo Jiba and senior prosecutor Lawrence Mwrebi heard evidence that it was Mosing who had made the decision to charge Booysen with racketeering).

McBride previously testified that he had been nervous of the involvement of Crime Intelligence in the Zimbabwe renditions investigation.

“The secrecy and usurping (of function or power) immediately got my guard up. I wanted to know why we were collaborating with SAPS in view of our independent role,” said McBride in earlier testimony.

Crime Intelligence acted in support of investigators at the Hawks or detectives in assisting them with their investigations, but not IPID, he said.

McBride told the commission on Monday that in effect there was only one report; a preliminary draft and a later final report.

The preliminary report signed by Khuba and provided to Mosing, said McBride, had been part of an ongoing investigation and could not have been final. Besides, IPID had no powers to institute charges and he would have expected the NPA to consider the evidence contained in the docket and not the opinion of an IPID investigator.

The first report recommended that Dramat as well as Gauteng Hawks head, Shadrack Sibiya, face criminal charges. The final report, signed by Khuba, Sesoko and McBride, had found, after further investigation, that there was no evidence to support the pressing of charges against Dramat.

It was then that Nhleko had appointed Werksmans to provide a report on the two supposed conflicting reports. Advocate Sandile July conducted the investigation.

McBride said that at the outset he had raised two issues with Werksmans, one about the constitutionality of Nhleko’s appointment of a private firm to conduct the investigation and the second about the origin of the case.

“In the interview with Mr July I reported on my first meeting with Khuba and the immediate concerns raised with him when I was brought up to date with the circumstances of how the case arrived at IPID.”

McBride said he expressed the absurdity of placing reliance on a preliminary report while there were still outstanding statements and other evidence to be included in the docket.

“There seemed to be an obsession with the existence of another preliminary report,” said McBride, adding that “it blinded people from seeing all of that was in order and that additional evidence had to be put in. All evidence has to be considered in its totality.”

He said that the misunderstanding, be it “wilful or inadvertent”, permeated the process downstream.

Pretorius said that the first IPID report had been imbued with a quality that it could never be changed even if it were factually and legally incorrect.

“So, had you not done the work in relation to the investigation that resulted in the second report, you would have been acting improperly,” Pretorius asked McBride.

Johan Booysen, Matthews Sesoko and Innocent Khuba are yet to testify at the commission.

McBride will continue his testimony on Tuesday. DM