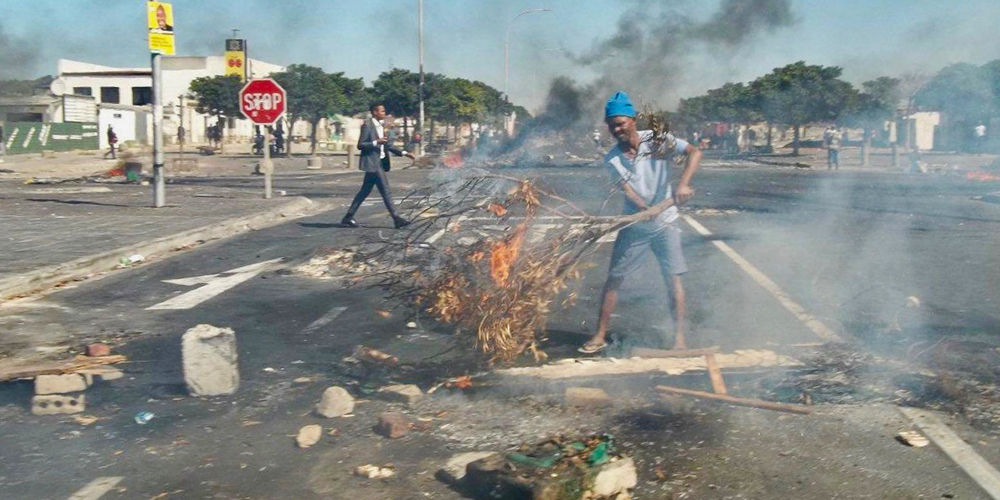 Early on Thursday morning, residents of Ilitha Park in Khayelitsha took to the streets to protest against high water bills. Water has recently become a recurring issue in informal settlements as political parties fight for votes in the lead-up to the 8 May elections.

With less than a month to go before South Africans head to the polls, multiple protests have erupted around the Western Cape. On Thursday morning, protestors in Ilitha Park in Khayelitsha blockaded roads, resulting in MyCiti and Golden Arrow buses halting operations in the area.

The protest was organised by activist group #Mayibuye# and the Water Crisis and High Bills group, led by Bishop Derrick Mtsolo of Litha Methodist Church in Ilitha Park. In a statement issued to other organisations and campaigns in Cape Town, the two groups called on residents to participate in a “Total Shut Down” of the city.

Mtsolo said that the protest was organised in response to issues around the scrapping of high water bills, installation of improperly functioning water meters and residential water being cut off.

“The residents are saying enough is enough. Their water bills are so, so high,” Mtsolo told Daily Maverick. “The only thing we want from them is to scratch the high bills.”

But according to Mayco member for water and waste Xanthea Limberg, the City has been engaging with Mtsolo and members of Ilitha Park for some time. Originally, Khayelitsha residents handed a memorandum of demands to the City and on receiving a response they were not satisfied with, requested a formal meeting with the mayor.

“The point that we did make continuously is that in order to resolve the individual complaints, we need the account information so that we can understand what may have resulted in the high water billings,” said Limberg.

According to a GroundUp report, residents barricaded roads with burning tyres and tree branches in Ilitha Park. Police dispersed the protesters with tear gas, but they regrouped and set the tyres alight on Spine Road. Youngsters sang struggle songs and charged the police.

The City has condemned the violent protests throughout the Metro, referring to them as “politically motivated.” MEC for Human Settlements Bonginkosi Madikizela told Daily Maverick that Thursday’s protest was orchestrated by the ANC in an attempt to make the Western Cape ungovernable.

“This protest is something that has been done by people with a political agenda, claiming to be protesting for the interest of the people. Bishop Mtsolo, who organised the protest, is an ANC man who thinks shutting down Khayelitsha will improve the ANC’s chances of winning the Western Cape,” said Madikizela.

“The man that I’m talking about is a man that I know very well. He doesn’t hide his affiliation as a member of the ANC.”

When asked if the protest was politically motivated, Mtsolo vehemently denied any connection to a political party.

“I am not protesting here because of the ANC, the EFF or any political party. I am a concerned resident of Ilitha Park.”

This is not the first time the issue of high water bills in informal settlements has come to light. In March 2019 the ANC in the Western Cape went door-to-door in Mitchells Plain in an effort to sign up residents to be litigants in a class action lawsuit against the DA. Tensions have since risen between the parties, with the DA claiming that the ANC is spreading misinformation, according to EWN.

Despite allegations of electioneering, protesters claim Thursday’s disruptions were not politically motivated.

“We didn’t see any T-shirts of any political parties,” said Muriel Siyatula, a resident of Ilitha Park.

Siyatula, a mother of four studying theology, claimed that her water bill increased from R1,000 to R2,500 in less than 12 months, and is still rising. She told Daily Maverick that she does not understand why her bill is so high, particularly because her children are all at school during the day and she is trying to conserve water.

Siyatula also told Daily Maverick that, at the meeting between Mtsolo, Khayelitsha residents and City representatives, the City “accepted themselves that the water meters are faulty”.

According to Limberg, the City had already received complaints about faulty water management devices when the issue was brought to light by the Water Crisis and High Bills group.

“We initiated an investigation a little while ago, and as a result of the investigation there was a temporary suspension of the devices being rolled out,” said Limberg. “All the issues that have been raised no longer pose a risk.”

But Limberg told Daily Maverick that the community had not yet been briefed on the outcome of the investigation. She said that a workshop with the community has been arranged for Tuesday, April 16.

According to Mtsolo, the community will wait until next week to raise their concerns again. DM