ANC Western Cape targets water as a voting issue, claiming that ‘the DA scared us with Day Zero’ 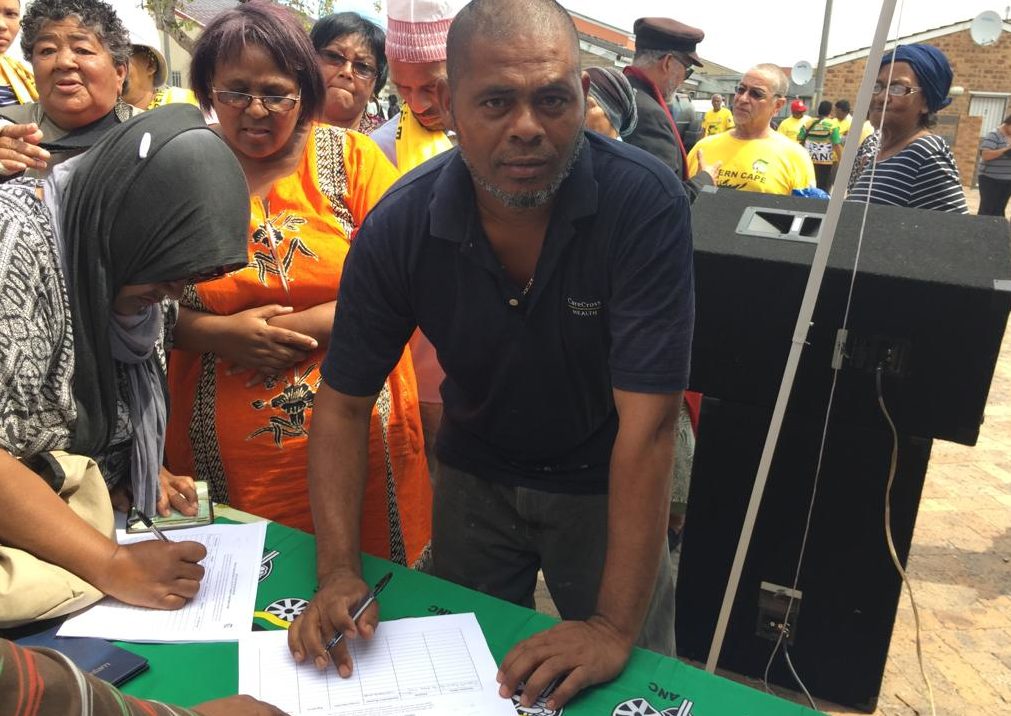 Shahied Ismail, the first person to sign on to be part of the ANC Western Cape class action against the City of Cape. Photo: ANC

With less than two months until South Africa’s national elections, the water crisis in Cape Town is emerging as a hotly contested issue between the two dominant political parties, the DA and the ANC.

The ANC in the Western Cape campaigned door-to-door in Lentegeur, Mitchells Plain on Wednesday, 13 March 2019 asking residents with water debt to sign up for a litigation case it has filed against the DA-led City of Cape Town. With less than eight weeks until the country heads to the polls, the ANC is hoping to gain more votes by riding on the wave of anger over water tariffs that peaked in 2018.

The national ruling party hit out at the DA this week, claiming that the party made a profit of R1-billion off the water crisis caused by the drought. The DA’s principal representative on the IEC Party Liaison Committee Mike Moriarty responded swiftly and said on Wednesday that the claim is “so outrageously false that we have reported it to the IEC Electoral Offences office to investigate against the ANC”. 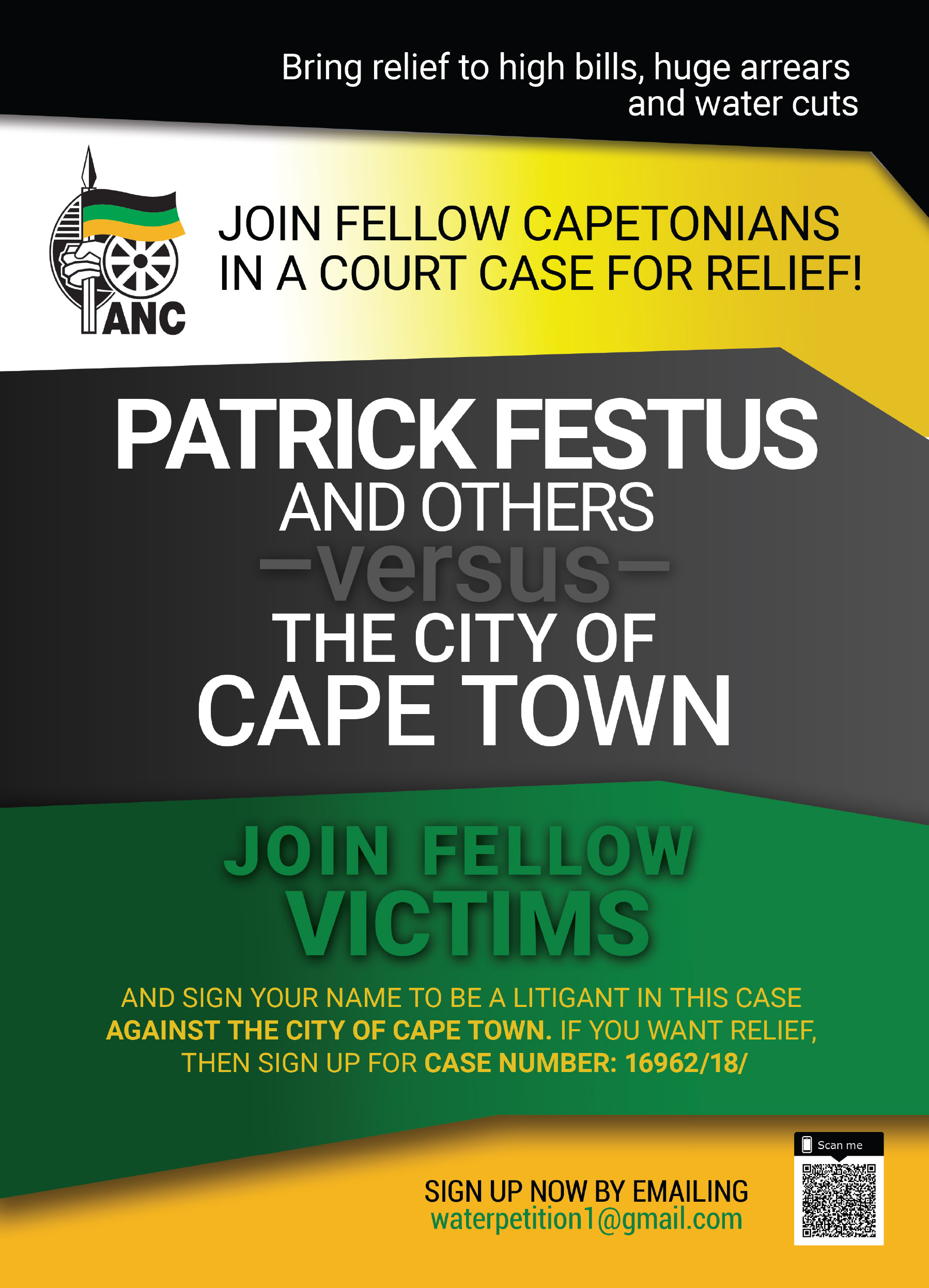 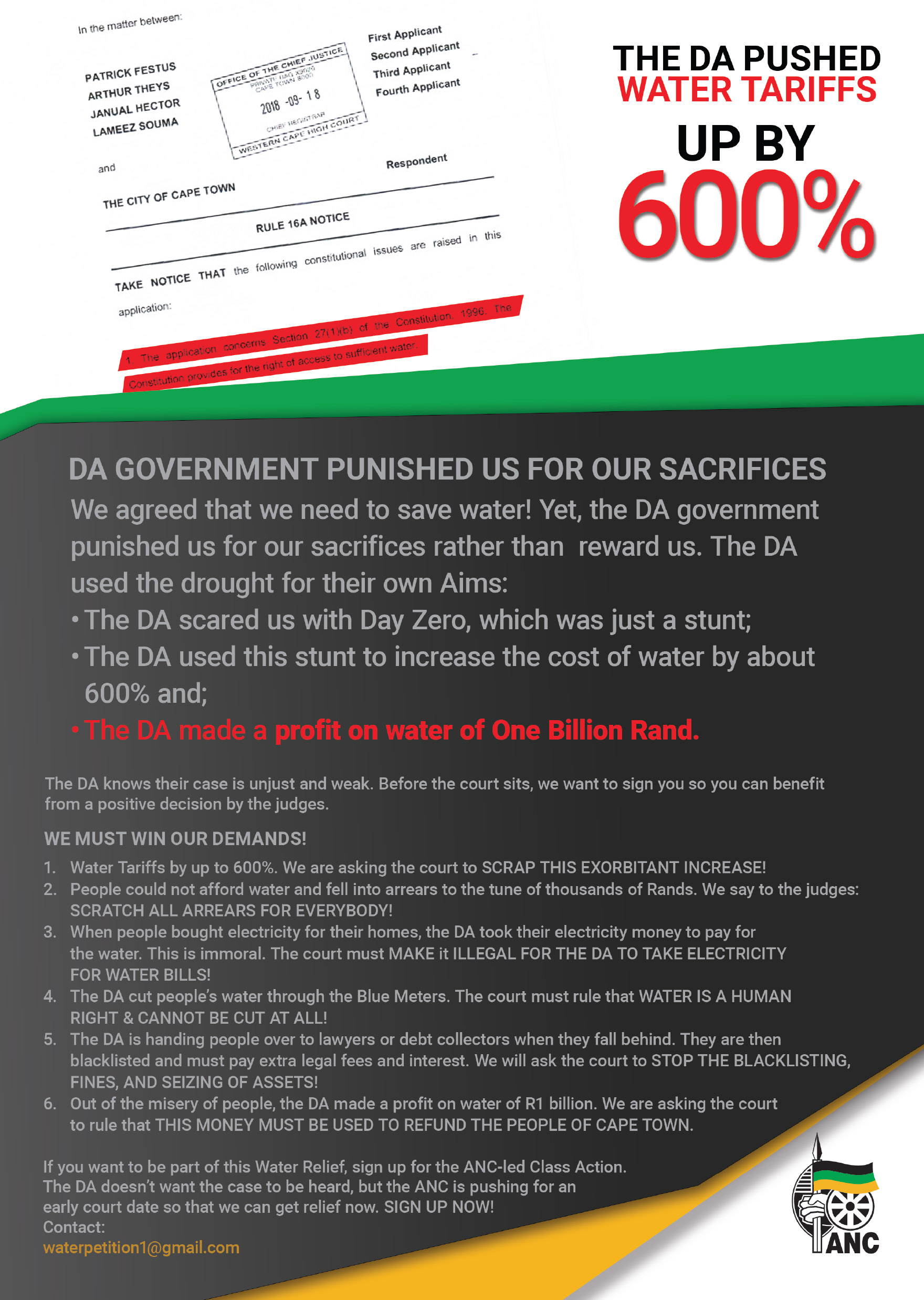 The ANC’s Western Cape elections head and former Western Cape premier, Ebrahim Rasool, told Daily Maverick the party is focusing on water tariffs and water-related debt after the alleged “failing” of the City to look out for struggling residents, in an attempt to increase party support.

According to Rasool, residents from across Cape Town had contacted the ANC for assistance regarding “steep water bills” and “exorbitant water-related arrears.”

“The DA created a crisis within a crisis,” said Rasool. “A human crisis out of an environmental crisis.”

Rasool claimed that the City of Cape Town used extreme punitive measures to create water disasters in low-income households during the drought. Due to the increased tariffs, Rasool told Daily Maverick that “people had their water cut off because they couldn’t pay”.

He said that non-indigent, low-income households have been the hardest hit.

“The tariffs put (a) disproportionate burden on the poor, who can’t drill boreholes, they can’t do wellpoints, they can’t get to the Newlands spring. The real crisis of drought and the invocation of Day Zero was used to scare people into accepting up to 600% increase in water tariffs, that then resulted in huge arrears.”

But Xanthea Limberg, mayoral committee member for Informal Settlements, Water and Waste Services and Energy, vehemently denies that the City has not assisted low-income households with water bills.

“About 40% of Cape Town residents receive water free,” she said.

Limberg told Daily Maverick that the City of Cape Town has allocated about R3-billion to indigent relief during the 2018-19 financial year.

“At the end of the financial year, when we asses the debt, we also often write off a significant amount of debt,” said Limberg.

Low-income residents are still facing high water bills, and in some instances, the city is stifling their access to water. In September 2018 four applicants, supported by the ANC, opened a class action lawsuit against the City of Cape Town in the Western Cape High Court.

Arguing for the constitutional right of access to water, they have asked the court to grant an interdict that prevents the City of Cape Town from disconnecting residents’ access to water, as well as a review of water tariffs. The four applicants have also requested that the court prevents the City from using prepaid electricity bought by residents with water arrears to pay for water debt.

One of the applicants, Patrick Festus from Eerste River, claimed in an affidavit seen by Daily Maverick that his electricity was cut off due to a water arrears amount of R603,544.

And Festus isn’t alone. At the height of the water crisis, the City came under fire from disgruntled residents who were faced with steep water bills. During level five water restrictions, non-indigent residents were charged R24.37 for using 0-6kl of water, a drastic increase from previous years where 6kl of water cost R4 before the drought. From 1 December 2018, the City implemented level three water restrictions, decreasing the cost of 6kl of water to R15.73.

Even though water tariffs have been reduced, low-income households who do not qualify as indigent were hard hit by the extreme cost of water during the drought, and are still battling to pay their debt. Using the example of R4 to R24.37 for 6kl of water, the ANC found that the cost of water increased by 600% for households using 6,000 litres of water a month. This increase has placed a burden on these struggling households.

Limberg pointed out that the City has been running an indigent debt relief programme for years, wherein their arrears and debt are scrapped in return for the installation of a water management device on their property.

Since the implementation of level three water restrictions in December, City of Cape Town residents have been using less water than the City budgeted for, according to Limberg.

Explaining the R1-billion profit claim, she said that although the City was over-recovering funds at the start of the financial year — to the tune of R1-billion — the step down from level six water restrictions to level three has resulted in an under-recovery of funds, as residents are not using as much water as the City budgeted for.

Based on current trends, she anticipates that the City will in fact under-recover on water costs at the end of the financial year, in mid-year. DM