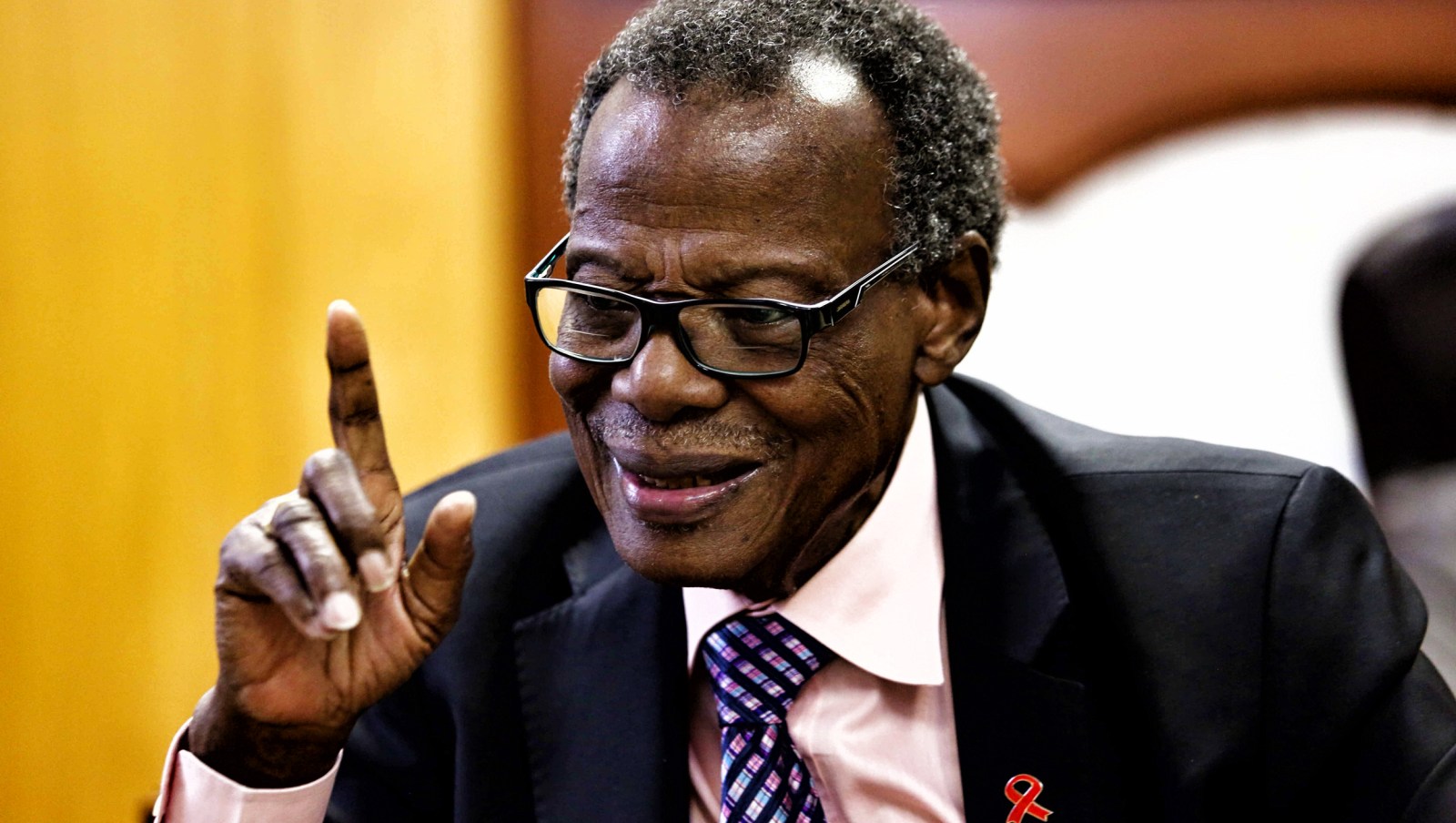 IFP leader Mangosuthu Buthelezi launched his party’s manifesto amid a torrent of rain, recycling its 2016 local government elections slogan, ‘Trust us’. He promised good governance and realistic social grants, without any socialism. He also had a special royal guest with an ominous nickname.

Prince Mangosuthu Buthelezi, who has led the IFP ever since he founded the party in 1975, should not even have been at the podium railing against the ANC’s corruption and socialism as the rain came down in the Chatsworth Stadium on Sunday.

Upon arrival, he did a lap around the stadium by car to greet the crowds – unlike the leaders of the ANC, DA and EFF at their respective manifesto launches in the past few weeks. They were still youthful enough to walk the distance.

Buthelezi is beginning to show and sound his age even though he looks younger than his 90 years, and despite good health from a diet free of sugar and red meat.

Party chairperson Muziwenkosi Gwala praised Buthelezi as “a leader who can be counted amongst the greatest leaders of our time”, who is “charged with a destiny of purpose to lead our people with dignity”.

Gwala went on to say that Buthelezi “took on the apartheid government, remaining true to his people” and he is “internationally respected as an elder statesman”.

He said Buthelezi “had been an advocate for peace, and a campaigner for social justice throughout his many decades on the political stage”, “a champion of family values, a principled leader and a Christian,” and a “shining light of morality, a humanitarian” – and a prince by virtue of his character and not just his lineage.

Some might disagree, as the Truth and Reconciliation Commission alleged that Buthelezi worked secretly with the police, the security police and a state-sponsored assassination squad. The party has denied this. Buthelezi has, however, disagreed with the ANC about its violent resistance against apartheid – something he brought up on Sunday as one of the things that differentiate the IFP from the ANC.

Buthelezi also spoke of corruption, claiming the IFP administration under him has never seen one corruption allegation.

“The IFP has vast experience in governance, both before liberation and since,” he said, adding that, throughout the past 44 years, the IFP has gained “an excellent track record in managing resources and designing a budget that maximises development and growth. We know how to get a lot done with very little. We make sure that every cent is accounted for, and every cent is stretched. When we administered the KwaZulu government, and when we administered KwaZulu-Natal, the IFP was known for integrity.”

Despite knowing how to turn every cent, and despite claiming to be the original givers of grants, there was little magic. Buthelezi said with South Africa’s current low growth rate of about one percent, it was unrealistic to increase social grants by as much as “some people” – presumably the Economic Freedom Fighters – were promising.

“I don’t know where they will get the money from,” he said. “South Africa is broke.”

Buthelezi also referred to his “friend”, the late former British prime minister Margaret Thatcher, who “took the decision to privatise state-owned enterprises in Britain. It became a turning point for the economy in Britain,” he said.

Buthelezi made no secret of the fact that he thinks socialism is rubbish.

“Tragically South African youth are being fed all socialist policies,” he said. “By the time they realise they have been led down the garden path, they would have suffered tremendous disappointment.”

He also – for obvious reasons, given his regionally-concentrated support base – railed against the centralised government, saying the IFP supported federalism and slamming the ANC for talking about scrapping provinces. (Truth is, the ANC is unlikely to ever deliver on this due to entrenched interests in the provincial governments.)

Buthelezi also reminisced about the past, such as the time when Tanzanian independence leader Julius Nyerere spoke to him about Zimbabwe’s new president, Robert Mugabe.

Buthelezi’s anointed successor, KwaZulu-Natal provincial secretary Velenkosini Hlabisa, sat next to him on the stage, with Buthelezi’s friend, the “King of the Kongo”, the colourful King Fabrice Kavabioko, on the other side. The king is nicknamed “Zombie” because of his love for wrestling, and is infamous in the DRC diaspora community in South Africa, where he once lived. He is also known as having been close to former DRC president Joseph Kabila.

At about an hour and a half long, the speech – all in English – was short for the veteran leader, who still holds the Guiness World Record for the longest legislative speech in 1993. It was even longer than the manifesto leaflet, totalling six pages and promising things like public-private partnerships for state-owned enterprises, increased minimum sentences with hard labour for prisoners, more involvement of traditional leadership in dispute resolution, a gender equality module in the school curriculum, and a ban on single-use plastics.

Even though its share of the vote has steadily declined since 1994, the IFP is hoping to make some gains in the 8 May elections. The 2016 local government elections saw the party get almost double the 954,021 votes it got in 2011 as the breakaway National Freedom Party was annihilated – and these gains might explain why the party decided to recycle the 2016 “trust us” slogan for the 2019 elections too.

Former president Jacob Zuma, whose stronghold is KwaZulu-Natal, where almost all of the IFP’s support is drawn from, was also considered to have been a factor in the drop of the party’s support to 22.4% of the total votes in the province in 2009 (4.55% nationally), to 10.86% in 2014 (2.4% nationally). With Zuma out of power, the party could be hoping that some voters with Zulu nationalist sentiments might turn back to the IFP. The party is, however, unlikely ever to come close to its 1994 elections performance again soon, when it had just over half of the votes in the province.

Just last week the IFP suffered some losses in by-elections in a few wards in northern KwaZulu-Natal, but just five months ago the party showed tremendous growth of 1,146% (50 votes in 2016 to 623) among Indian voters in a by-election in Chatsworth’s ward 71.

By-elections are broadly speaking an unreliable indicator of national support as they are contested amid very local dynamics and often with a very low turnout. It could, however, well be that the IFP is betting on the sizeable Indian community in Durban as a possible source of future growth, as Buthelezi led a charm offensive to the Hare Krishna temple in that area before going to the stadium for the rally on Sunday. DM