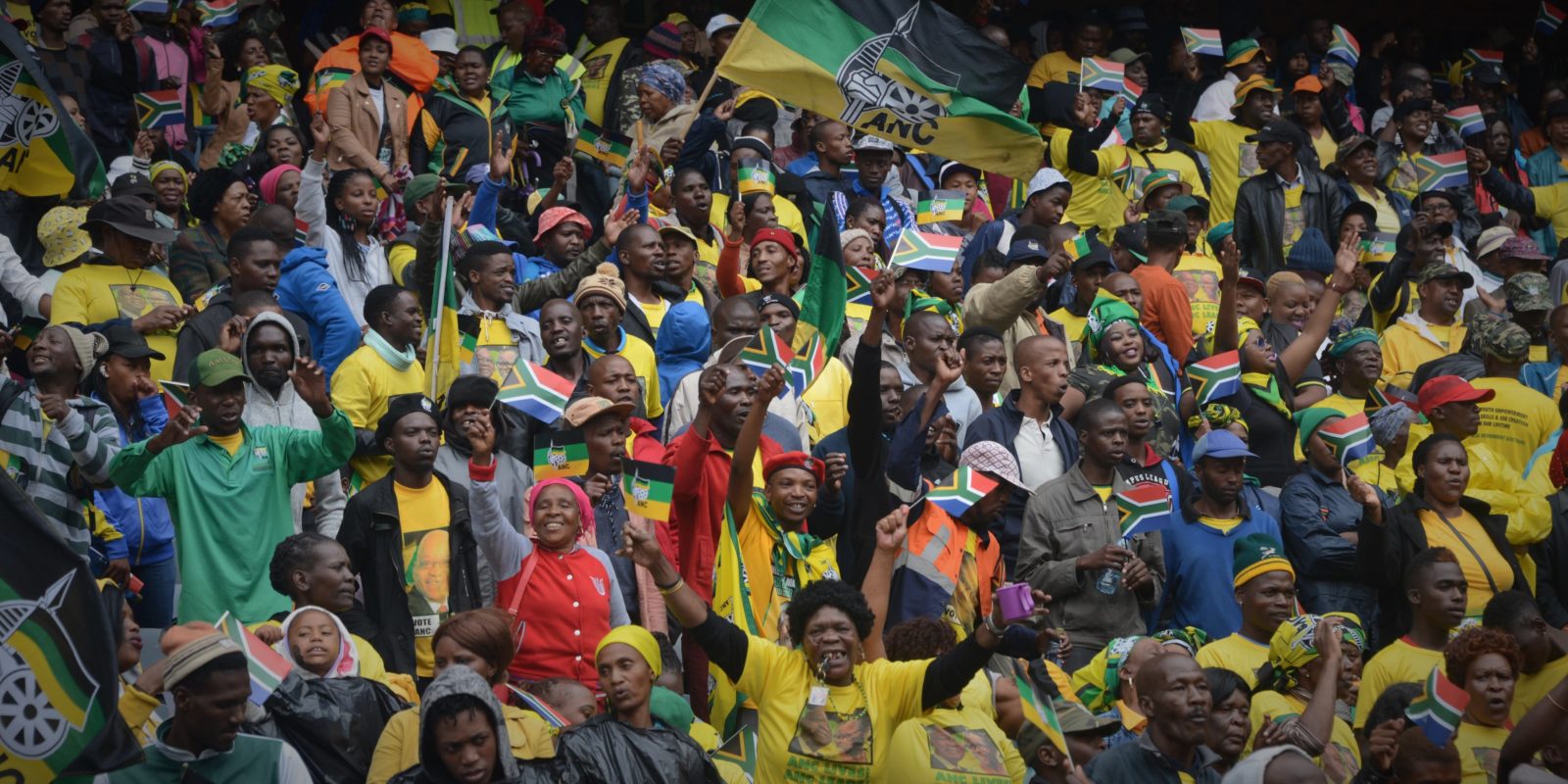 MK and ANC celebrates during 105th anniversary celebrations of the founding of the African National Congress (ANC) on January 08, 2016 at Orlando stadium in Soweto, South Africa, 8 January 2017. Photo: Frennie Shivambu

It’s the ANC’s big week. Focused on eThekwini, it is holding three key events over a week: The first NEC meeting of the New Year that wrapped up on Sunday, the traditional January 8 statement on Tuesday setting out ANC priorities for 2019 and Saturday’s 2019 election manifesto launch. While the party has much practice in pulling out all the stops for a vibrant political spectacle at selected key moments, what remains important are governing party dynamics that spectacular events may obscure.

Sometimes, the more things change, the more they seem to stay the same. The ANC’s first National Executive Committee (NEC) meeting in 2019 was meant to wrap up the election candidates national list for Parliament. Instead, it kicked for touch, in what has become ANC practice, to obfuscate deep-seated factionalism through proclamations of unity in action — and proclaiming a “milestone” agreement on public representative candidates’ vetting criteria.

Names and rankings were discussed, it emerged by Sunday, but a final decision on the governing party’s MP candidates would only be taken after a vetting process. In a post-NEC media conference in Umhlanga on Sunday, live-streamed by SABC, acting ANC national spokesperson Dakota Legoete said:

“The final list is still going to be approved. A special NEC will be called.”

That could be as early as later in January when the ANC holds its NEC lekgotla, traditionally held to contribute to the State of the Nation Address that sets out government priorities for the year.

But the weekend ahead of a crucial electioneering week in the largest ANC province was marred by mobilisation at various levels by Jacob Zuma-supporting groupings — in a province where a police special task team is investigating the resurgence of political killings.

The public representative candidates’ vetting, according to Sunday’s official ANC statement, was meant to ensure “all candidates can withstand scrutiny and meet all the requirements… The ANC is under no illusion that its list must embrace its integrity with a calibre of public representatives that are capable of advancing the electoral mandate of the ANC”.

On paper the vetting criteria look good, including that a public representative candidate may not have caused divisions or conflict, must have “no history of ill-discipline or corruption”, must not have a post-1996 criminal conviction of more than 12 months’ jail without the option of a fine — this is in line with the criteria set out in South Africa’s Constitution — must have skills, experience to contribute to the legislative programme and “must enhance the integrity of the ANC”.

And while the weekend ANC NEC meeting may well have whittled down 800 names to 200, the initial draft national-to-national list raised eyebrows when it was circulated late in 2018. It is a mix of factional interests — just because the jockeying no longer plays out in public does not mean it has subsided or ended — reflecting the tight balance of the 2017 Nasrec ANC national conference that saw Cyril Ramaphosa elected by 179 votes as party president.

The top 20 of this draft list also includes ANC Women’s League President Bathabile Dlamini, Minister for Women in the Presidency, who while at the helm of social development sparked the social grant debacle, and Environmental Affairs Minister Nomvula Mokonyane, who left the water and sanitation portfolio more than R6-billion in the red. Their retention in the Cabinet by President Cyril Ramaphosa in both his reshuffles has disappointed many inside and outside the governing party amid arguments that they represented certain constituencies which could not be shafted on pain of being accused of purges.

The draft list also appears to create jobs in Parliament for outgoing premiers such as the Eastern Cape’s Phumulo Masualle, who has served his two terms, ex-premiers such as Noxolo Kiviet, former mayors such as Johannesburg’s one-time boss Parks Tau and others such as former Cosatu president S’dumo Dlamini, a firm Zuma supporter.

It also includes many who have faced, but were acquitted of corruption charges, such as ANC MP Alvin Botes, the former Northern Cape social development MEC, or had corruption and fraud charges withdrawn against them such as ANC MP Peggy Nkonyeni, a former KwaZulu-Natal legislature Speaker and Education MEC, alongside her fellow one-time fraud accused who had charges withdrawn, Mike Mabuyakhulu, a former MEC and now the ANC KwaZulu-Natal task team chairperson.

At the weekend ANC Deputy Secretary General Jessie Duarte was quoted by EWN as saying a criminal record would be the main disqualification.

“Where a person hasn’t been judged criminally, and there’s no decision by a judge finding him/her guilty or has been sentenced to a jail term. There’s very little that we do, in term of the broader perspective that might emerge around particular individuals.”

Perhaps the list process “milestone” the ANC NEC claimed on Sunday was that there had been agreement on the criteria — at least on paper, these would allow a clean-up if there’s the political will — and on further steps in the process. What happens during the vetting is the real proof of the pudding and will indicate where the power in the party lies — in the drive to clean up, not only in government and state-owned entities (SOEs) as the Ramaphosa presidency is pursuing, but also in the integrity of the ANC, or at the hands of the push-back campaign.

It emerged on Sunday that the final ANC national list, like those for the provincial legislatures, would not be made public before being registered with the Electoral Commission of South Africa (IEC). That’s still some time to go, as the submission to the IEC of party political candidates lists is required only once the election date is proclaimed.

Closer at hand is the ANC’s 2019 election manifesto launch on Saturday 12 January, although talk of filling up Durban’s Moses Mabhida Stadium was restrained, as was the content of the election manifesto. Acting ANC national spokesperson Zizi Kodwa has gone on public record saying that after 25 years in government the manifesto would be “commitments”, not a basket of promises. On Sunday Legoete maintained he could not give a hint, as protocol dictated this was Ramaphosa’s prerogative as ANC president.

It’s not too far a reach to expect jobs, land, and perhaps education to be key in the ANC manifesto. Those are areas the governing party could quite convincingly argue its commitment and ability to deliver.

The process on land expropriation without compensation is well underway in Parliament, as are job-creation initiatives arising out of the ANC government’s job and investment summits that Ramaphosa has relentlessly been driving from within months of becoming South Africa’s president in February 2018, alongside the national minimum wage.

And on the back of the proclaimed better overall 2018 matric pass results — it appears Basic Education believes it bears no responsibility the roughly 50% drop-out rate over 12 years of schooling — free tertiary education for students from homes with an annual income of less than R350,000 would be emphasised.

That 2019 election manifesto, dubbed the “People’s Manifesto”, represents the governing ANC’s efforts to recapture ground lost in the final years of the scandal-ridden Zuma presidency.

Voters klapped the ANC in the 2016 local government elections when its support dropped to 54% nationally, down from 62% scored in the 2014 national and provincial elections, alongside the ANC’s loss of control in key metros like Johannesburg, Tshwane and Nelson Mandela Bay. But that was all by-the-by now, the ANC argued in a statement earlier in January 2019 on the back of manifesto grassroots consultations:

“We go into these elections humbled by the trust South Africans continue to place in the ANC to transform their lives for the better.  The road has not been easy and we learnt through our mistakes.”

Part of this learning of lessons is a refocusing of the ANC on its values of old, or reconnection to the Madiba presidency, as was the call from activists, veterans and stalwarts in the months ahead of the ANC December 2017 Nasrec national conference.

Ramaphosa has a sharp eye for symbolism to give expression to this renewal. On 11 February 2018, exactly at the same time, Nelson Mandela addressed the crowds on Cape Town’s Grand Parade following his release from 27 years in jail, Ramaphosa stepped up to the City Hall balcony. Twenty-eight years earlier Ramaphosa held the microphone for Madiba.

On Tuesday 8 January, on the 107th anniversary of the founding of the ANC, Ramaphosa again channels Madiba: He’s headed to the Ohlange Institute in Inanda where Mandela, on 27 April 1994, cast his vote in South Africa’s first democratic elections, before paying tribute at the grave of John Langalibalele Dube, the founding president of the South African Native National Congress, that became the ANC.

Ramaphosa’s programme on Tuesday shows he will lay a wreath at the same graveside, and meet the family and relatives of Dube, who with his first wife Nokutela Dube (née Mdima) raised the money in the United States to establish this education facility. Then there’s the obligatory mini-rally.

It’s set to be a quieter moment than anything that may happen at the People’s Manifesto launch at the 85,000-seater Moses Mabhida Stadium. Still, it is pregnant with important symbolism, including of ANC renewal and a return to its founding values and direction.

But regardless of Ramaphosa channelling Madiba in the 25th year after South Africa’s first democratic elections in 1994, the test for the ANC will be at the hustings later in 2019. And there, after years of scandal and the continuing jockeying of factional interests amid proclamations of unity, is where the real test lies. DM