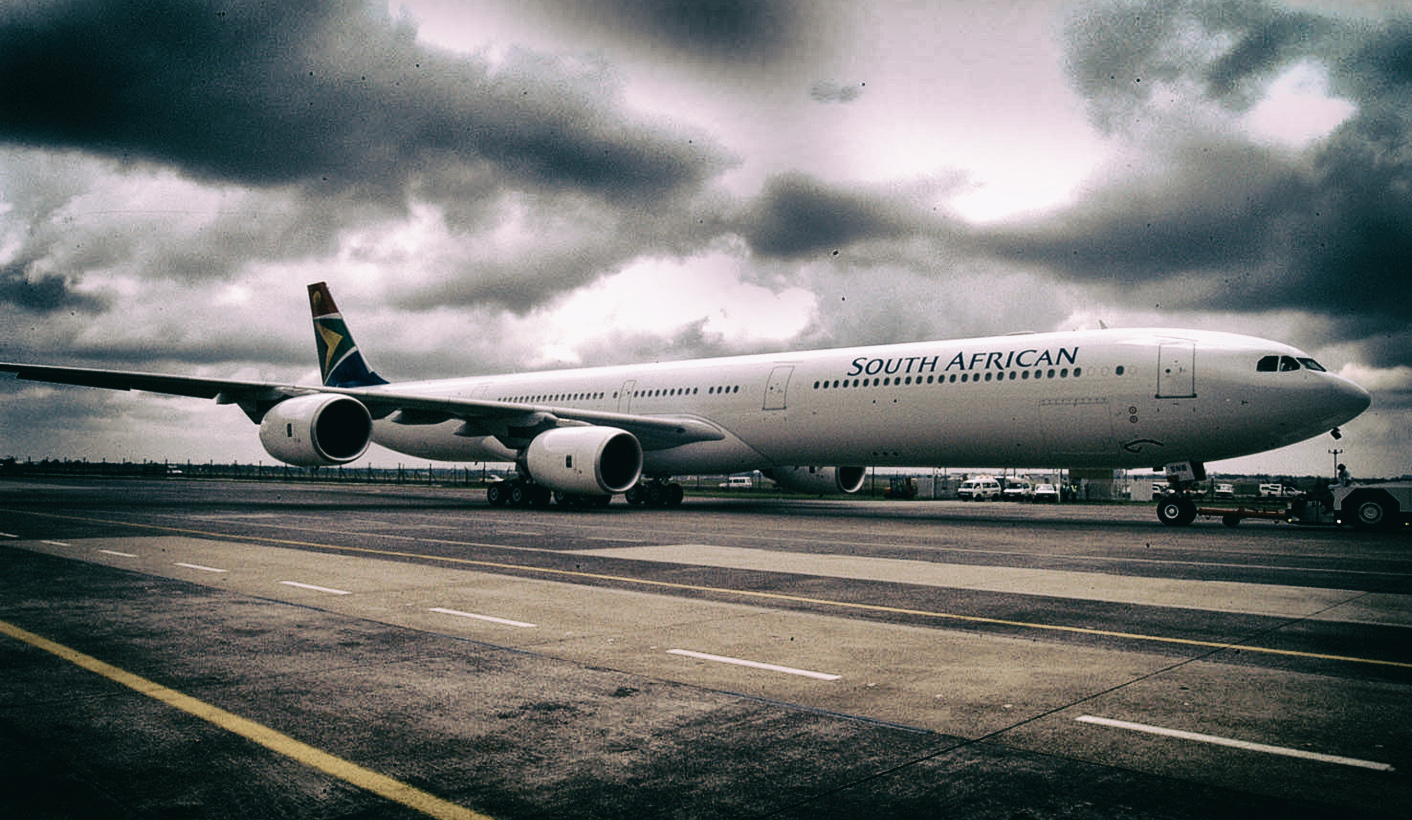 SAA's first A340-600 comes in to land at Johannesburg International on its maiden flight from France. Picture: Shayne Robinson/SAPA

In an often heated all-day marathon session in the National Assembly, tempers erupted, often on points of order or whether someone sneaked in when the doors should have been closed ahead of a vote. But by 19:30 on Wednesday, the business of the House was done — SAA got its R5-billion bailout and government departments their additional allocations, as provided for by the Medium-Term Budget Policy Statement.

There’s some stuff that’s not meant to go wrong. Closing the doors when the bells are rung ahead of a division, or a vote on a specific matter, should be run of the mill. It’s been done umpteen times for the past 24 years of a democratic Parliament. Not so on Wednesday.

Two ANC MPs were seen coming in after the call for a division for the Adjustments Appropriation Bill — the draft law to give effect to the Medium-Term Budget Policy Statement (MTBPS) — and Health Minister Aaron Motsoaledi was spotted holding open the doors that were meant to be closed, but were not. He apologised for that.

One of the latecomers, Minister in the Presidency for Planning, Monitoring and Evaluation Nkosazana Dlamini Zuma, got to her feet, objecting to opposition claims she sneaked in.

“I didn’t open the door. I found the door open. For someone to say I came in when the doors were closed is just wrong.”

Presiding officer Thoko Didiza ruled that the two MPs she’d seen coming in late would not be allowed to vote. The Bill was approved 156 votes for, nine against.

It set the tone for a long afternoon, after an unusual 10:00 start in a scramble to clear a chock-a-block in-tray before the parliamentary calendar ends next week, when Parliament rises for 2018.

The Adjustments Appropriation Bill agreed to, it was time for the debate on the MTBPS. It was steeped in politicking, sharply more so than other sessions.

“Only the ANC can be trusted,” was how Standing Committee on Appropriations chairperson Yvonne Phosa concluded her debate-opener. DA MP David Maynier hit back, saying the ANC and EFF “turned a deaf ear to the pensioners” to vote against his party’s proposal for a R355 pension top-up by redirecting the R1.2-billion earmarked to SA Express.

After the EFF called on voters to “turn against the ANC and DA” because of their mismanagement, IFP MP Mkhuleko Hlengwa let rip, saying it was time the ANC stopped taking credit for the Zondo Commission as that had been a Public Protector finding.

“You aided and abetted the chief architect of State Capture. You can’t come her and say State Capture commission yadda, yadda, yadda. No!” said Hlengwa, looking at the ANC parliamentary benches:

“It is you who have aided and abetted Jacob Zuma.”

“South Africans can trust us with governing the country come 2019.”

“Voters must surely do what the ANC is asking of them by fighting back in 2019: Vote and do not waste your vote on a party that keeps doing the wrong thing.”

After the debate, from just past 16:00, it was down to the approval of votes, all 40 of them, from vote number one, The Presidency to vote number 40, Sport and Recreation.

Political parties had agreed to a time management system — the allotted time of party political statements or questions would be deducted from the overall allocated numbers of minutes — 45 minutes for the ANC, 16 for the DA, six for the EFF and four minutes for the IFP. Everyone else had three minutes. It helped keep a mammoth task in line, although after the first round of considerations it came down to approvals — again one by one — and divisions, or votes, were frequently called for by the DA.

Co-operative Governance Minister Zweli Mkhize was the first called to answer questions. After being asked by the National Freedom Party (NFP) about the progress of steps against municipalities that unlawfully invested with the now-collapsed VBS Mutual Bank, the minister replied that several North West officials had been charged — “some of them are actually councillors” — while the outcomes of forensic audits are being considered.

On Public Enterprises, the DA and EFF came out against the adjustment vote. DA MP Natasha Mazzone said it like a pre take-off safety announcement, arguing that it was time to sell SAA or get ready “for the captain’s command: Brace for the crash landing”.

EFF MP Victoria Mente opposed the adjustment allocations, citing a possible re-introduction of a rogue unit and the selling off of Denel and Transnet. And if Mente’s comments are anything to go by, much of the EFF drive against Public Enterprises Minister Pravin Gordhan appears to be linked to personality.

Like the EFF support of sacked SARS boss Tom Moyane, the EFF is now backing dismissed Transnet CEO Siyabonga Gama. Or as Mente put it:

“Gama demonstrated positive results… Gama was booted out (by Gordhan).”

While Moyane continues to challenge his sacking, Gama earlier in November lost his court bid to return to his job, from which he was dismissed by the Transnet board largely over his role in the acquisition of 1,064 locomotives for R54-billion involving Gupta-linked companies. Transnet, like Denel, Eskom and SAA, is among the state-owned enterprises (SOEs) under Public Enterprises.

Gordhan responded that all the mentioned SoEs were victims of State Capture and being “denialist” about it was unhelpful:

And selling off anything was not on the cards right now as strategic partners could only be brought in when entities were in good health.

On vote 40, Sport and Recreation, there really was only one question from the DA, EFF, IFP and NFP: When will Banyana Banyana, who’ve just qualified for the World Cup, receive the same incentives, bonuses and support as their male soccer counterparts.

“It’s not only Banyana Banyana… but it’s also the cricket females, who are doing very well and our netball girls are flying our flag high,” said Sports and Recreation Deputy Minister Gert Oosthuizen, with not a word about rands and cents or other official recognition.

The ANC supported all allocation adjustments.

After divisions on most, but not all, the 40 votes, the overall Appropriations Bill that gives effect to the additional funding of the MTBPS was approved, with objections from the DA and EFF.

And so it was on to the R5-billion special appropriation for SAA, after the committee report was adopted. The ANC supported it, the DA did not — “SAA are extorting R5-billion from service delivery from poor South Africans,” said DA MP Alf Lees — and neither did the EFF, IFP, UDM and Freedom Front Plus.

But SAA got its R5-billion bailout on the back of ANC numbers in the House with a vote of 197 for and 22 against, no abstentions.

Wednesday’s passage of these money bills to give effect to the MTBPS allocations marks a key moment in the parliamentary calendar. But as Parliament hurtles though its business, the Order Paper in the now three-times-a-week sittings — many weeks passed this year with just one such sitting — has ballooned to nine, 12 or even 16 items.

DA Chief Whip John Steenhuisen took the gap to address the EFF tweets mocking him at having only a matric, revealed in a Sunday Times report, to dismiss academic elitism.

“(The) Constitution specifically ensured that no matter whether you are a mineworker or a brain surgeon, you could seek election to represent your community.

Steenhuisen said he enrolled for a bachelors degree in politics and law at Unisa in 1994, but never finished due to financial and work pressures.

The debate on the amendment Bill became heated as the EFF stood up on various vocal points of order, objecting to what was said from the podium. At one stage, “racist” was bandied about. It did not deteriorate to the chaos in the opposition benches seen earlier in November.

Higher Education Minister Naledi Pandor, tongue-in-cheek, thanked Steenhuisen for a most lively debate, in a show of parliamentary wit that is often missing in the acerbic political point-scoring in the House. DM