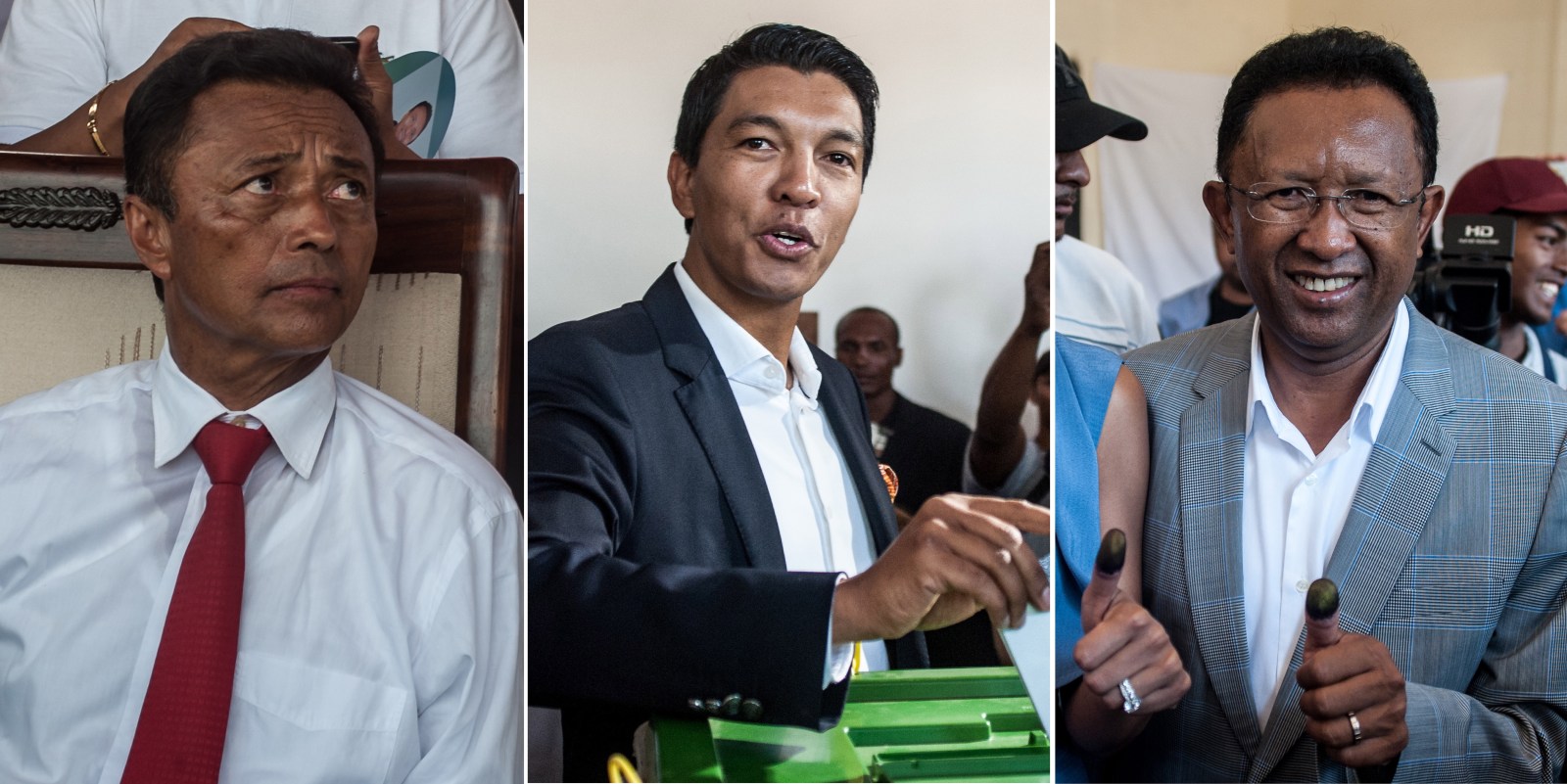 A threefold composite image made of file pictures shows (L-R) Marc Ravalomanana, Andry Rajoelina and Henry Rajaonarimampianina, the three ex-presidents and front-runners in the presidential elections in Antananarivo, Madagascar (issued 07 November 2018). Voters in Madagascar on 07 November headed to the polls. EPA-EFE/HENITSOA RAFALIA

The results of the election, in which three former presidents – Hery Rajaonarimampianina, Andry Rajoelina and Marc Ravalomanana – are the favourites, must be accepted and seen as legitimate to prevent further political instability.

Eyes were on Madagascar as it held its first round of presidential elections on 7 November. Not many eyes, though. Madagascar’s geographic seclusion has kept it from the top of most people’s lists when covering African countries. But the ‘Big Island’ boasts an impressive array of natural resources – including chromite, bauxite, semi-precious stones and oil. The state-owned oil company, Office des Mines Nationales et des Industries Stratégiques (OMNIS), just launched its first oil licensing round since 2006.

The licences are located in off-shore Madagascar next to Mozambique’s Rovuma Basin, in which major international companies have discovered major gas reserves. The opportunities in this area could be equally impressive, but only if there is the stability necessary for companies to make the investment needed to explore this area. The results of the election, in which three former presidents – Hery Rajaonarimampianina, Andry Rajoelina and Marc Ravalomanana – are the favourites, must be accepted and seen as legitimate to prevent further political instability.

So far, recent events in the run-up to the election have increased the risk of post-electoral conflict. Unrest first started in April, when opposition supporters protested against electoral laws that would have prohibited Ravalomanana from running in these elections. Rajaonarimampianina eventually relented and revised the law, but not before the deaths of two protestors. This initial flashpoint did not grow into a larger event thanks largely to the behind-the-scenes work of South African President Cyril Ramaphosa in his duties as Southern African Development Community chair. Doubts remain whether the elections will be run properly. However, more work will be needed to placate opposition candidates, some of which, including former president Didier Ratsiraka, have called for a postponement.

In order to confirm that its electoral list was legitimate, the Commission Eléctorale Nationale Indépendante (CENI) (independent national electoral commission) requested the international organisation of French-speaking countries, La Francophonie, to conduct an audit of the electoral list in mid-September. Mission head General Siaka Sangaré signed off on the list, declaring that, while there were some issues, “[the electoral list] is a file which guarantees equality for all candidates and is a list on which we can hold credible elections in 2018.”

The opposition disagreed. Most of the 36 presidential candidates have joined Ratsiraka and complained about serious mistakes in the electoral list. However, with the first round of elections imminent, it may be impossible to completely correct the list. One issue is the number of duplicate names. CENI president Hery Rakotomanana acknowledged on 23 September that there were 12,000 duplicate entries in the list, but assured the media that these would be red-flagged and sent to all polling stations to prevent anyone from voting twice. As a result, 25 of the 36 candidates signed an agreement on 19 October calling for the postponement of the first round of elections until the electoral list is correct. However, some candidates, including favourites Ravalomanana, Rajoelina and Rajaonarimampianina, have rejected calls for a postponement. Civil society organisations have also rejected further delays. Lawyer Sahondra Ravenarivo points out that it is next to impossible to have a “perfect list” and questions whether there has been “a flawless voters list since 1960″ and if “the flaws in the electoral list [are] worth the force majeure.”

Prime Minister Christian Ntsay on 23 October flatly refused to allow any delay in the elections, saying the delay would place Madagascar in an unconstitutional framework and increase the risk of instability. According to Rakotomanana, it would take three months to correct the voters list, which would put the elections far in to 2019. However, with no civil society or government support for a postponement, the elections will go ahead as scheduled and Madagascar will have a new government in January.

Although there is no clear favourite, most analysts agree it is a race between Ravalomanana and Rajoelina. Ravalomanana’s communications consultant, Peter Mann, pronounced that Ravalomanana is “widely regarded as the most successful president in Madagascar’s history”, a quote that some pro-Ravalomanana media outlets have widely reprinted. This exposure appears to have put Ravalomanana ahead as the front runner, though a survey commissioned by the Germany-based foundation, Friedrich Ebert Stiftung (FES), found otherwise. The FES telephone poll of 800 citizens gave Rajoelina 25% of the vote, ahead of Ravalomanana with 17% and Rajaonarimampianina with 4%. Reportedly, 47% of respondents refused to answer and the poll is criticised as it was only conducted in urban areas. Although the government criticised and banned the poll on 26 September, France-based political magazine Jeune Afrique published the results. The poll indicates that there is likely to be a second round vote between Rajoelina and Ravalomanana, which means that Rajaonarimampianina will play kingmaker. Considering that Rajaonarimampianina dismissed Rajoelina after Rajoelina gave him his support in the 2013 election, Rajoanarimampianina is likely to support Ravalomanana in a second round, which should be enough for Ravalomanana to become president once again.

A Ravalomana win is a best-case scenario for business. Ravalomanana was a pro-business president and will favour fewer restrictions for mining and oil companies who invest. Some opposition members have criticised Ravalomanana as ‘South Africa’s candidate’, due to his time spent in exile in South Africa and rumours that he may now favour South African companies if he is elected. Rajoelina is considered more populist and may use legislation – such as the revised oil and mining codes – as a means to win support from rural Malagasy. While a Ravalomanana win is the best case scenario for business, it is also the scenario with the highest risk of future political instability if Rajoelina re-enacts his political manoeuvres from 2009 to unseat Ravalomanana again. For Madagascar to benefit from its potential natural resources, the political environment will need to change and to accept that the elections are not a zero-sum game. Opposition leaders are not losers of the election, but play a key role in holding the government to account, particularly in regards to the exploration and exploitation of its resources. DM

Hery Rajaonarimampianina – leader of Hery Vaovao hoan’i Madagasikara (New Forces for Madagascar). President from 2014 until constitutionally-mandated resignation on 7 September 2018. Former finance minister under Rajoelina’s transitional government, and received Rajoelina’s support during 2013 campaign, though Rajoelina later pulled his support after Rajaonarimampianina refused to give him an official position in the new government.

Andry Rajoelina – leader of Tanora malaGasy Vonona (determined Malagasy youth). Former Antananarivo mayor and led coup against Ravalomanana in 2009. President of the Haute Autorité de Transition (high transitional authority) from 2009 to 2014 and was barred from contesting the 2013 election. Former events organiser and nicknamed “the DJ”.

Marc Ravalomanana – leader of the Tiako I Madagasikara (TIM) political party. President from 2002-2009. Founder and CEO of vast dairy empire in Madagascar and given nickname “the milkman”. DM