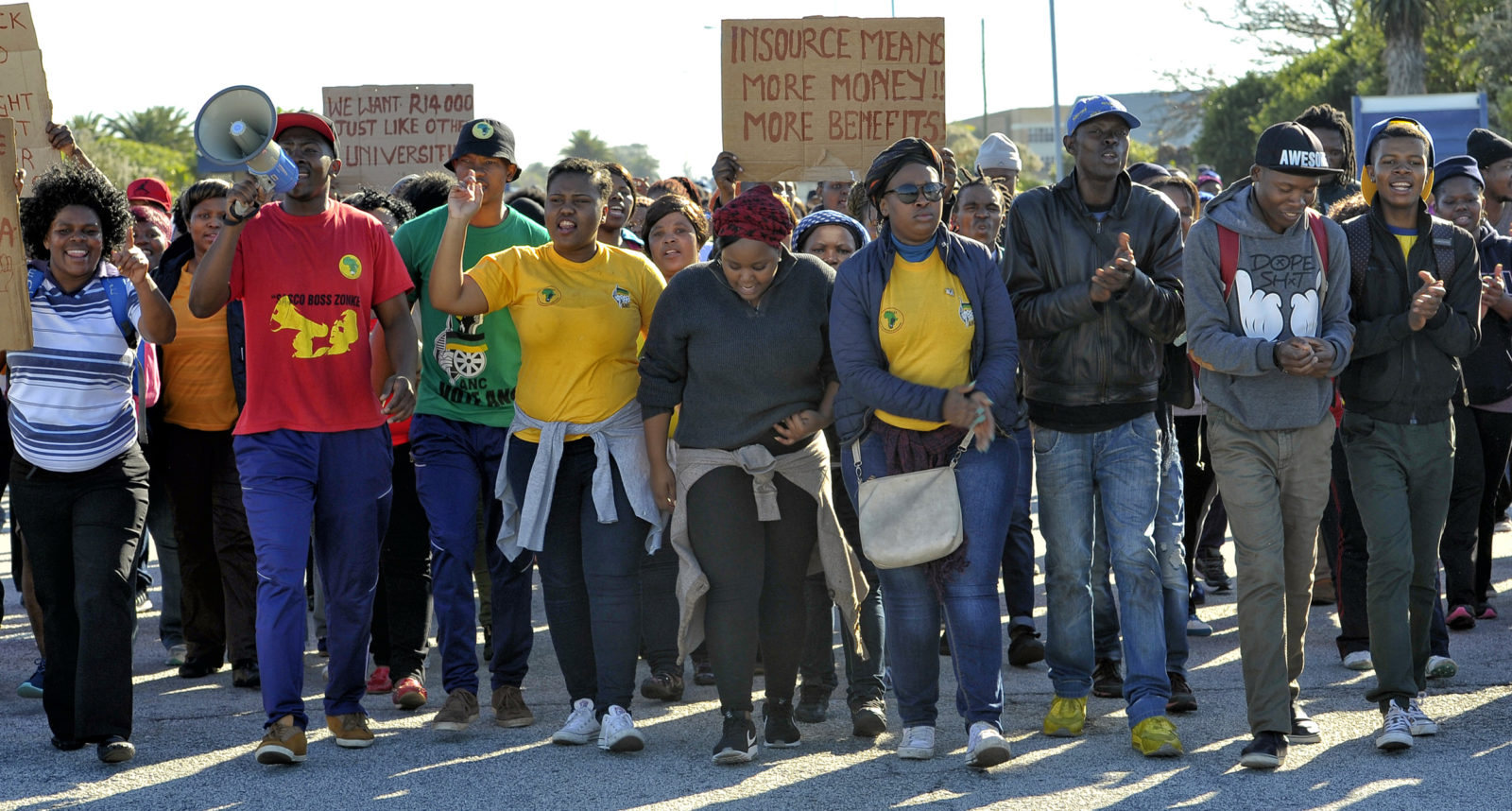 On Tuesday, the South African Student Congress (Sasco) called a press conference to highlight its ‘overlooked’ 2018/2019 SRC election victories at the University of Limpopo, University of Venda and Wits University. It also wanted to dispel what it sees as an unsubstantiated perception that the ANC-aligned student movement is ‘losing ground’.

While Sasco’s loss at universities in KwaZulu-Natal might be seen as a referendum against the ANC, the EFF Student Command’s loss at Wits and campuses in Limpopo appears to spell out a more fascinating tale of how the EFF fares in positions of governance.

The EFF Student Command, in a province considered ANC territory, created a surprising upset early in October by winning Students Representative Council (SRC) elections at the Durban University of Technology, University of Zululand and at least one campus of the University of KwaZulu-Natal.

But their celebrations were short-lived when the ANC-aligned South African Student Congress (Sasco) took back all the Limpopo campuses previously lost to the EFF Student Command.

Sasco has won the University of Limpopo, University of Venda and Tshwane University of Technology — which is still gripped in an election rigging controversy where a student was allegedly shot dead by a police officer.

With less than a handful of journalists waiting at Luthuli House for the press conference to begin, the young leaders of Sasco swaggered in and asked everyone if they needed more time to prepare themselves.

“We wish to brief the media on a number of issues,” said Sasco deputy president Lyanda Tenge.

Then Sasco president Avela Mjajubana read a statement detailing issues concerning the student movement — its overall performance in this year’s SRC elections, student exams, mental health on campus, alleged corruption in universities, plans for the remainder of the year and the 2019 general elections — with a few digressions to emphasise some points.

“We want to dispute the general notion that Sasco is losing ground in these SRC elections,” said Mjajubana, a masters student at Durban University of Technology, one campus lost to the EFF Student Command.

In what seemed like an imitation of their grand old party, these young leaders exuded the false confidence of an organisation that seems to be in charge while grasping for the normalcy of a bygone era, when the ANC enjoyed uncontested hegemony.

According to the latest SRC election results countrywide, the EFF Student Command has won 11 of the 27 universities, while Sasco has taken nine and the DA Student Organisation three.

“Young people in Limpopo and Gauteng are rejecting the EFF,” said Mjajubana.

Yet, while Sasco has clawed back historical strongholds such as Wits University from the EFF Student Command, this can be seen more as a failure of the young fighters to build on its credentials when in positions of governance than an outright victory for Sasco.

In 2017, only 18% of the student population at Wits University cast their votes in the SRC election. And although voting was extended for two more days, Vice-Chancellor Adam Habib was forced to declare the results valid even though it did not meet the 25% voters’ threshold. The EFF Student Command went on to take 12 of the 15 seats.

At the time, it was thought that low ANC morale during the days of Zuma may have impacted on the voter turnout, rather than a switch in party loyalty.

This large increase in voter turnout can be attributed to both the urgency within the ANC, reinvigorated by the Ramaphosa presidency and preparation ahead of the 2019 national elections. It also saw Sasco win back 12 of the 15 seats on the SRC.

This again played a factor at the University of Venda (an EFF Student Command stronghold) election where Sasco had received a meagre 264 votes in 2017, losing the campus for three years in row.This led to a breakaway from alliance partner Student Union for Christian Action.

However, after some intervention from the ANC Provincial Executive Committee in Limpopo, the factional split between Sasco, Student Union for Christian Action and the Young Communist League alliance was to be overlooked.

Sasco then rejoined Student Union for Christian Action and ran as the ANCYL, winning by 3,314 votes in 2018.

What drove students to turn up significantly this year for the ANC-aligned Sasco compared with previous years?

According to Royal Pfunzo, a second-year media studies student at the University of Venda, the intervention from the ANC to unite the factions had a huge impact.

Previously, having being in power for so long at the university, said Pfunzo, cadre deployment was a big issue when handing out positions within the SRC, because they expected to win all the time.

It seems that Sasco, as a long-reigning student movement, could not escape the institutional decline that liberation movements go through after years in power without a strong opposition.

“They went all-out this year in the campaign,” said Pfunzo.

According to Pfunzo, there is a rumour on campus that the ANC spent R3-million on the SRC election campaign.

“Julius has been rejected by students,” said Mjajubana, at the Luthuli House press conference in what began to seem like an EFF-bashing gathering.

“He can’t convince even 20,000 students and now wants to be president,” he continued.

The new breed of young leaders raged, mumbled and swaggered, resorting to the same old bag of tricks of blaming the media and university management bias for their poor performance, while betraying a fear of being replaced and relegated to opposition party as the ground shifts under them.

But perhaps more important was the EFF Student Command’s own performance as a governing student society.

“They took power three years ago and have not done much on campus,” said Pfunzo.

Although he admits that the SRC has been reduced to announcing what NSFAS was doing, the EFF Student Command called protests only once in a while.

When the Student Command arrived on the student politics scene it quickly garnered support for their radical and often confrontational style.

For Dhavhelo Ndou, a fourth-year accounting science student at Wits, he liked how they would criticise the Sasco-led Progressive Youth Alliance that had grown out of touch with student issues on the ground.

During the heated days of the #FeesMustFall movement, the young fighters drew a huge following for their fearlessness when dealing with university management and rallying students to protest against what was seen as an oppressive institutional system.

And so leading up to the 2017 SRC elections, the incumbent student movement that had ruled the campus for as long as anyone can remember had grown complacent, but the EFF Student Command brought a renewed hope as the new kid on the block, which led to the overthrow of the Progressive Youth Alliance.

“A lot of students voted for the EFF Student Command because of their radicalism,” said Ndou.

Students started to complain about how the EFF Student Command was no longer visible among students and was always at meetings with management.

“When they got into power they realised that a lot of time had to be put into doing the work,” said Ndou.

They could not bridge the gap between being in opposition and governance, continued Ndou. And because of this they crumbled under the pressure.

Furthermore, when the newly elected EFF Student Command-led SRC took office, the Sasco-led Progressive Youth Alliance incited a protest during the last days of the #FeesMustFall movement — against historical debt and outstanding fees not covered by the the newly pronounced free education by former president Jacob Zuma.

It came as a shock to students when the EFF Student Command released a statement condemning violence and protest during exam time. This move alienated some of its support base as they were seen to have changed their tune now that they were in office.

According to Ndou, this paralysed the movement for free education. They were now seen as sellouts.

And whatever the EFF Student Command accomplished while in office, said Ndou, was nothing different to what the university had planned to do, such as opening the Yale Village Residence outside campus to accommodate more students.

Because of these factors, the EFF Student Command was still promising to deliver the same things they had promised in their 2017 election manifesto for the 2018 SRC election campaign.

Among these were a policy to exempt students from academic exclusion in their first year, assist them with outstanding fees, fight for affordable student accommodation, have a satellite police station in Braamfontein and a 24-hour clinic on and off campus with standby ambulances as well as a bus service to the Bree Street and MTN taxi ranks.

All of which were not delivered.

Some money was raised to help students pay outstanding fees and a new residence was opened by the university, things which Ndou insists are the norm in what the SRC does yearly.

This seems to be a similar circumstance that led to the EFF Student Command losing the University of Limpopo.

Puleng Moshoeu, an honours student at the University of Limpopo, said the EFF Student Command-led SRC President Given Malatji was sacked within six months amid allegations of corruption for using SRC budget funds to buy a car.

Even though the EFF Student Command initially introduced some innovative programmes such as meals for students during the day and free sanitary towels, they had to be cancelled after funds ran out.

“The EFF Student Command was too comfortable and they lost touch with majority of students,” said Moshoeu.

“Their so-called radicalism led to a behaviour that left student disgruntled,” he said.

After Malatji was removed from office the SRC collapsed. Aid programmes were later stopped after the student budget became depleted.

“The EFF Student Command lost touch with the general masses, giving Sasco a platform to raise issues that concerned students,” said a student.

And yet things are not going well on the either side as the young leaders of Sasco continue to fall back on the old ANC habit of feigning introspection when they experience a loss.

“To describe the whole electoral process at the University of Limpopo, it is a battle of resources,” said Moshoeu.

Sasco did not win by virtue of being a popular movement, claimed Moshoeu, but through the amount of money that flowed into the election from the provincial leadership. The money was used to bring celebrities to campus and to buy thousands of T-shirts to give to students.

If Sasco succeeds, it will have control of Gauteng except for one campus — the University of Johannesburg, which is in EFF Student Command hands. DM