RISE OF THE EFF YOUTH 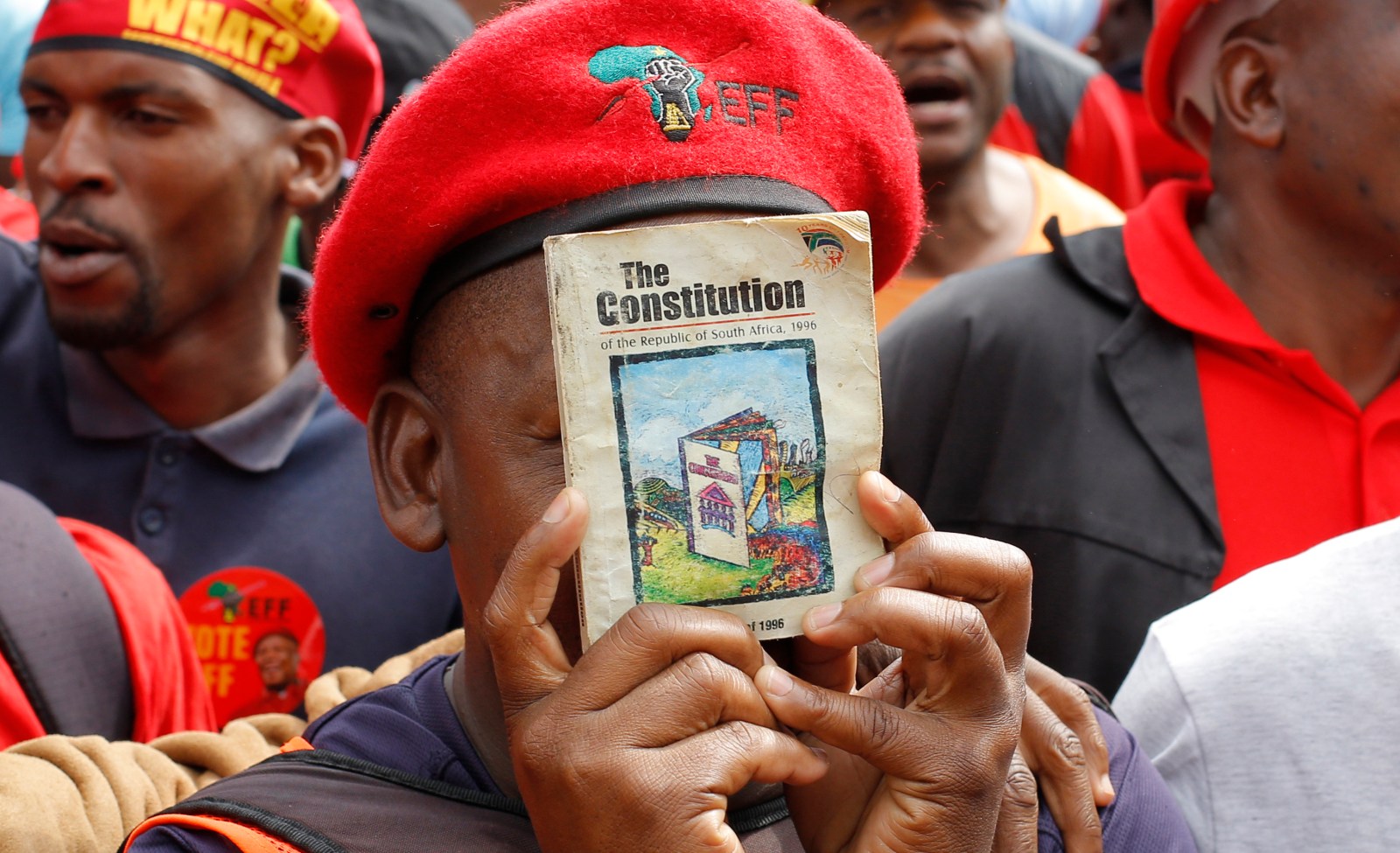 A member of the Economic Freedom Fighters (EFF) party holds a copy of the Constitution during a mass protest at the Union Buildings calling for President Zuma to step down, Pretoria, South Africa, 12 April 2017. EPA/KIM LUDBROOK

A seismic shift appears to be jolting student politics as the Economic Freedom Fighters Student Command rakes up top positions in SRC elections at universities. The ANC-aligned South African Students Congress is in a state of self-reflection over its losses. This small-scale, contained, yet significant trend may hold some clues to the outcome of the 2019 national elections.

The Economic Freedom Fighters Students Command has so far registered historic wins in SRC elections at institutions of higher learning, surprisingly at some known ANCYL strongholds in KwaZulu-Natal.

Although many universities are yet to go to the polls, these wins are significant and tell an impressive tale of how the EFF Students Command intends to end this student politics election season with a bang.

The Progressive Youth Alliance (a student body coalition of ANCYL, Sasco and the Young Communist League took only 13 of the 26 universities in SRC elections, taking a huge plunge from the complete control enjoyed in previous years.

And it seems 2018 is not proving to be the comeback year they had intended.

Of the five campuses of University of KwaZulu-Natal, Westville, gaining seven of the eight seats. Sasco retained all seats at Edgewood, the medical school and Pietermaritzburg.

The EFF Students Command has garnered a surprising victory from a base that had consistently supported ANC-aligned Sasco and the IFP’s South African Democratic Student Movement in previous years.

Furthermore, after a heated contestation at the University of Cape Town, the EFF Students Command unseated the long-established Democratic Alliance Student Organisation (Daso), winning eight of the 15 SRC seats.

Other universities are still having elections, with many already known to be EFF Student Command territories.

And although the upset by the EFF Students Command within universities might appear to be out of nowhere, “fighters” as they are called, have been gaining ground slowly, first in historically black universities with an overwhelming victory at the University of Limpopo in 2014 and later at historically white institutions such as the University of the Witwatersrand, in 2017 as the blaze took hold.

And although information regarding TVET colleges is not readily available, the EFF Students Command seems to be gaining more ground there as it looks forward to SRC elections in February 2019.

This intense campaigning within student politics is, of course, part of the one province, one million votes campaign of the EFF, meant to pump the mother body with young votes for the 2019 national elections.

“It is evident enough that young people are starting to understand our ideological position as the EFF and EFF Students Command,” said Keetse.

“And what we stand for,” continued Keetse, “is free quality education.”

It began with a walk-in campaign at the beginning of the year, where students were instructed to walk into universities for free registration after former President Zuma had declared free education as a policy of government, although without detailing specifics of how that this would be implemented.

“We pressured universities to open their gates to students. And these (students) are the people who are voting for us now,” said Keetse.

He believes that when students vote for the EFF Students Command it is an affirmation of their trust in their leadership, especially when they are voted back into power at places like Sol Plaatjie University and the expected victory in the upcoming elections at Vaal University of Technology and Wits.

For Keetse, the EFF being an opposition party limits what the EFF Students Command can do. If in power, they could achieve so much more. “We are confident that we will do well in 2019, this is actually a warning shot to the ruling party,” said Keetse.

Secretary-General of Sasco Lwando Majiza brushed aside the EFF Students Command gains. The “small victory” was not in any way a prediction of the 2019 national general elections.

For Majiza, student allegiance to a party is renewed every year — and they vote according to how the SRC has addressed their day-to-day concerns on campus. So this will not necessarily reflect on the performance of both the ANC and EFF in the polls.

“Students are the most unreliable base,” said Majiza. “They can’t trap their lives for five years with a party that wants to experiment in governance,” said Majiza.

He admits disappointment at Sasco’s performance, but believes this provides an opportunity of “self-reflection” for the student movement on how to rebuild at all levels.

Majiza believes the loss is because student societies have similar policies and therefore fight for the same constituency. Furthermore, the party’s lengthy focus on internal rifts rather than student issues has had an impact.

“These losses have shown that we no longer enjoy the hegemony we once had,” admitted Majiza.

According to Daso national leader Yusuf Cassim, the elections have yielded mixed results, where they have gained ground in other places but lost footing in another.

The change in student politics resulted in a loss at UCT, but a win at the historically black University of Fort Hare and at historically white Stellenbosch University.

For Cassim, this is definitely signifies that ANC-aligned societies are not doing well and that there is a change in dynamics in the constituency of the Democratic Alliance.

“Particularly in the rural areas, we have seen a growth in our support, as well as for the EFF,” said Cassim.

The SA Institute of Race Relations recently published a poll showing that the EFF has doubled its support from the previous election to 13%, with the ANC dropping from 62% to 52%.

According to the poll, conducted between 22 August 2018 and 4 September 2018 with 1,000 registered voters, the surge in support for the EFF comes at the expense of the ANC while the DA continues on its trajectory, at 23%.

“The defining characteristic of the current national political landscape is a surge in support for the EFF and, simultaneously, a dramatic decline in support for the ANC, compared to the 2014 election results. The EFF would appear to have grown at the ANC’s expense. The DA remains stable, demonstrating some small growth nationally and among black voters,” reads the report.

But according to Dr Somadoda Fikeni, chairman of the Walter Sisulu University council, student support might not necessarily translate into votes in the polls.

“We have seen trends of Daso and Pasma (Pan African Student Movement of Azania) winning and that as not translated to the overall election outcome nationally.”

The messages being sent by student organisations on campuses might have been effective in the SRC elections, but older working-class demographics who have families and therefore different concerns, might not be as receptive. DM