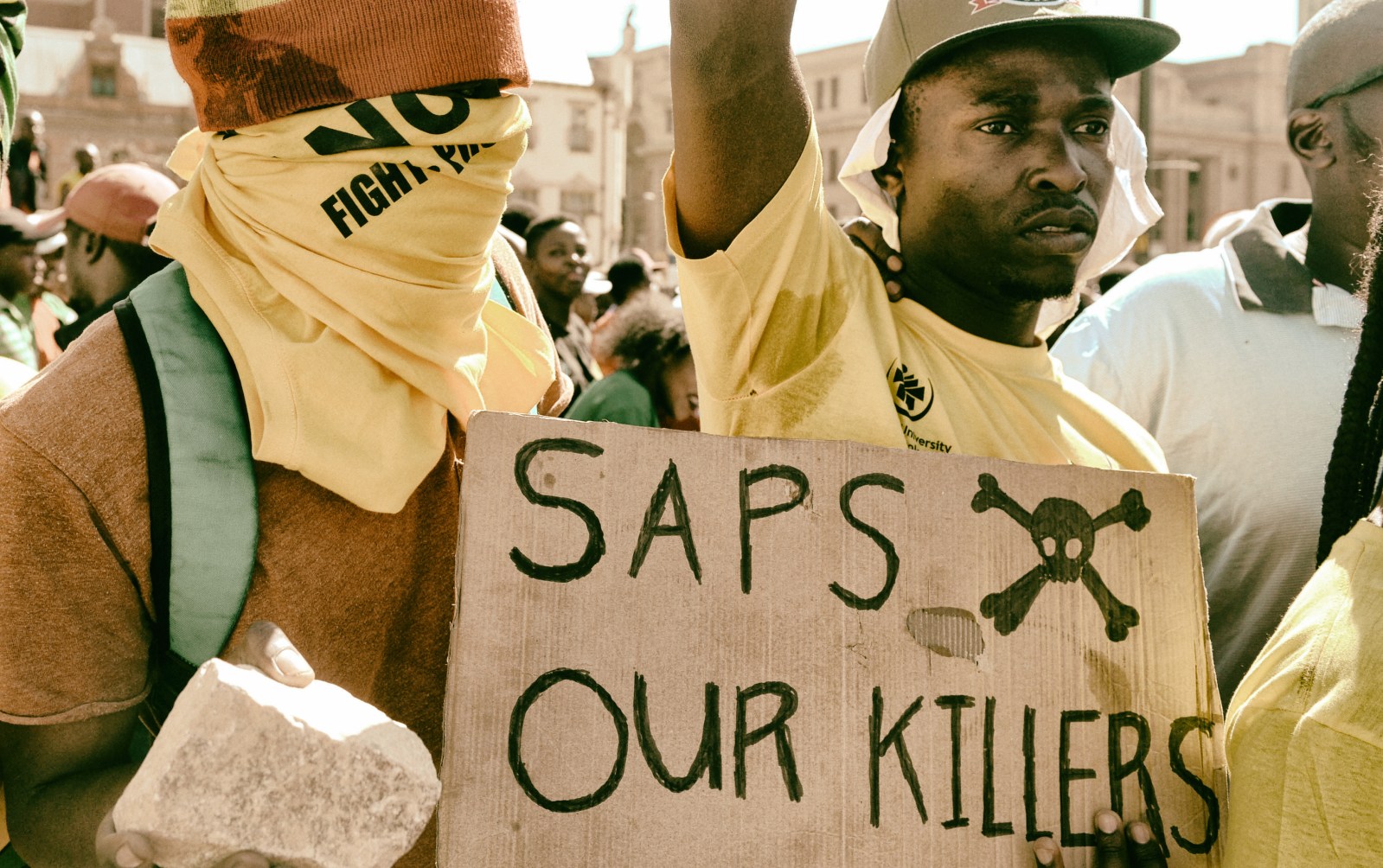 Tshwane University of Technology students protest at central business district, demanding justice for slain fellow student on August 29, 2018 in Pretoria, South Africa. Students warned that they have the capacity to declare the CBD ungovernable if justice is not served and no one is held responsible for the murder of final year student, Katlego Andries Monareng who shot at campus, allegedly by police. (Photo by Gallo Images / Netwerk24 / Deaan Vivier)

The deaths of 759 people in the last financial year can be linked to the police — 201 died in police custody, while 558 people died as a result of police action. The Independent Police Investigative Directorate 2017/18 annual report paints a grim picture as police torture complaints increased by 44 to 217, and 43 on-duty police officers came under investigation for rape, eight more than a year earlier.

According to the Ipid 2017/18 annual report, deaths as a result of police action include seven “innocent bystanders” shot dead with police service firearms, 18 deaths of pedestrians struck by police vehicles and eight deaths, including one by suffocation, recorded during police crowd management cases.

Most deaths, however, were those of suspects: 165 died during the commission of a crime, with the majority shot by police, and 142 died during arrest — again most were shot dead by police.

KwaZulu-Natal has also recorded the most torture complaints against police, 119 of the total of 217 — and up from the 80 complaints lodged the preceding 2016/17 financial year — followed by Free State (39) and Mpumalanga (32). The complaints in the Free State and Mpumalanga more than doubled from 25 and 19 respectively.

A significant proportion of deaths in police custody — 58 of the 201 — were by suicide, raising questions why those detained were allowed to keep belts, shoe laces or even tracksuit laces. One of the suicides was hanging by electric cord and three by rope.

But the Ipid annual report also shows the police watchdog is battling to clear its backlog of 3,434 complaints — and to speedily finalise its dockets. The highest completion rate is recorded in cases of rape in police custody — nine out of nine — and deaths in police custody, although Gauteng sticks out like a sore thumb with its 34% rate amid the high-80 percentages and 100% in Limpopo.

In other categories the completion percentages range from 69 of the 105 rape complaints involving on and off-duty police, 45% for corruption cases to 31% for assault cases and 18% for torture complaints.

A key reason is lack of funding. Ipid has long called for more funding, and for those financial allocations not to come through the police budget, but independently, given its role as police watchdog.

“The reality of the constrained financial resources affected the performance of the core programme, namely investigations and information management. This can be seen in the performance figures. As a strategic intervention, the Ipid scaled down general investigations and prioritised life-and-limb matters, serious violations of human rights and corruption,” writes Ipid boss Robert McBride, in the annual report overview.

But none of this is readily apparent from the SAPS 2017/18 annual report. Nor was it immediately clear how the SAPS in its annual report dealt with the 931 cases involving police officers Ipid says came on the court roll in the year under consideration. The majority are assaults of various seriousness (455), but also murder (155), rape (91) and attempted murder (93), according to the Ipid 2017/18 annual report.

The disjunction could be because of methodology — perhaps the SAPS sees the cases against its members as part of the prosecuting authority reporting criteria — or a time delay due to internal processes. It’s not necessarily unique, given also the differing sets of statistics on convictions and trial-ready dockets arising between the SAPS and National Prosecuting Authority (NPA) annual reports. For example, Ipid claims 234 disciplinary convictions arising out of its recommendations — stating that there were a total of 311 disciplinary convictions of SAPS members, and 36 dismissals.

But the SAPS 2017/18 annual report appears to record at least 284 dismissals noted in two separate sections dealing with misconduct.

One, dominated by fraud, corruption and related matters, shows the SAPS finalised 274 of 315 internal disciplinary cases against its members. The total of 151 guilty verdicts, including 64 dismissals, largely seems to be for corruption and defeating the ends of justice. One count of aiding an escapee against an East London constable led to a not guilty verdict because “only two posted at cells to manage 23 prisoners — shortage of members evident”.

The other misconduct section, this time under the heading of “Labour Relations”, indicates 1,960 outcomes from 2,414 cases, including 629 acquittals and 258 withdrawals. The remaining 1,073 cases, according to the SAPS 2017/18 annual report, led to, among others, 220 dismissals, 341 final written warnings, 198 suspensions without payment and 90 instances of what’s called “corrective counselling”.

The disciplinary guilty verdicts, included eight for murder and nine for rape — it is not immediately clear if police also pursued criminal charges — 399 for failure to comply with an act, regulation or legal obligation, 315 for “improper, disgraceful and unacceptable” conduct, 18 for operating a money-lending scheme for employees during working hours and from official premises, 12 guilty verdicts for having “prevented another employee form belonging to any trade union”, while 41 reported drunk for duty, six “without authorisation, slept on duty”.

As Ipid continues to be the statutory police watchdog with a budget of R315.1-million in the current financial year, the SAPS as at 31 March 2018 had set aside R6.5-billion in contingent liabilities for claims against it. DM