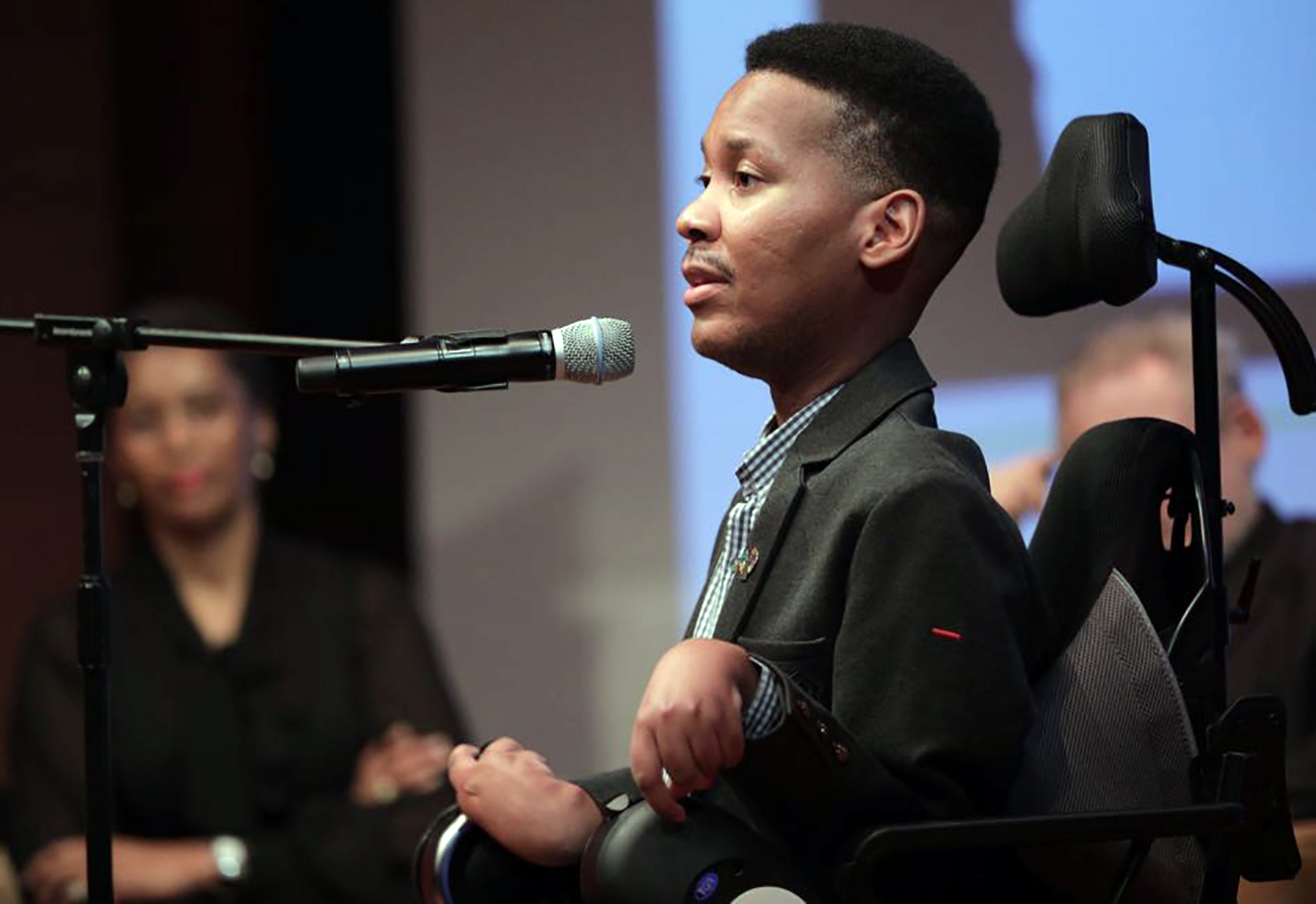 Brand South Africa was on fire on the sidelines of the United Nations General Assembly, inviting human rights activist and future space-traveller Edward Ndopu to inspire South Africans abroad to also play their part. Global South Africa is yet to take off properly, but this almost-28-year-old was a pretty good start.

Eddie Ndopu is bound for space, and he is not going to let a degenerative disease which has bound him to a space-age wheelchair stop him. The genius, party-loving 28-year old has, after all, already outlived the prognosis for his spinal muscular atrophy by 25 years.

In this way he’s a great symbol for what his home country, South Africa, has achieved through its almost impossibly peaceful transition, and of the work that lies ahead of getting its economy to rocket again — which would include taking the corrupt to task.

On Thursday night, Ndopu arrived some minutes early at the Rubin Museum of Art in downtown Manhattan where he was due to deliver a “special address” at Brand SA’s late Heritage Day celebration. The strict museum managers relented a little and opened a few minutes early, just because it was him.

An hour or two later, after the mandatory speeches were delivered in the museum auditorium by Kanyisile Kweyama, Brand SA’s chairperson of the board of trustees, and Minister of Trade and Industry Rob Davies, Ndopu was wheeled on to the stage.

“I’m in New York because I’m joining forces with the UN to address the UN General Assembly chamber from outer space,” he said, only minimally moving his head and his fingers when he spoke, but visibly moving the entire audience of about 100 people, which consisted of South Africans who are living abroad and visiting, as well as one or two friends of South Africa.

“I’m doing this because I think about the quote by Madiba when he said: ‘It always seems impossible until it’s done’. My life has been about achieving the impossible. I’m a living manifestation of impossibility.”

He said he’s defied his prognosis “and outlived myself by 23 years and now I seek to defy gravity itself”.

He’s bound for space in a few months, and said it made him “so proud” to have the backing of his country and to announce his undertaking during former president Nelson Mandela’s centenary year. The details of his undertaking will be made clear in due course.

Ndopu has worked to overcome social exclusion for people with disabilities, also in education. “My mother, who is a single mother, has knocked on many, many doors to get access to me for a basic education.” She eventually found one school that accepted him.

Last year Ndopu became the first African with a degenerative disease to graduate from Oxford University – although, friends say, he almost gave up more than once because of the challenges it brought.

Brand SA did well to get him on board for its Play Your Part campaign, in which it wants global South Africans to contribute to advertising the virtues of the country using their skills, wherever they are.

It’s a lofty idea, especially given how negative South Africa expats sometimes are about life back home. The skewed information reflected in the recent tweet by US President Donald Trump about supposed state-sanctioned land grabs in South Africa and a systematic targeting of white people, shows just what damage such negative talk can do.

Kweyama said South Africans outside the country should play their part in the development of the country, and she urged those who acquired skills abroad to go back to South Africa and apply these there.

“It’s up to all of us in this room — we have the responsibility to use the attributes of ubuntu to build a non-racist, non-sexist South Africa,” she said, saying social cohesion and ubuntu were important.

She also mentioned the “economic diplomacy activations” by President Cyril Ramaphosa during his four days in New York last week, but especially on Wednesday, when he spoke on a panel at the Bloomberg forum and when Brand SA organised a high-level meeting between Ramaphosa and officials and CEOs, including the Corporate Council on Africa.

Ramaphosa delivered the same upbeat speech half a dozen times in order to woo those with the big bucks into coming to South Africa so that he could achieve his $100 billion target for new investments.

Davies on Thursday night explained how the Ireland Celtic Tiger model was being used for this, referring to a period of economic growth in that country fuelled by foreign direct investment.

“The president said he would come back (to check on the progress),” Davies said, “but the challenge is for the community here to come together”. South Africa could also play a significant role on the African continent if its economy picks up.

It was clear from the comments made and questions asked by audience members that the South African community in high-powered New York City was not as organised as it could be.

A Cape Town man introducing himself as Isaac said he ran an engineering firm back home, but “I got tired of people wanting R10-million” – presumably in kickbacks for contracts. How was he supposed to use his skills back home?

As he turned away from the mic to return to his seat, he mumbled, unhappy with the official response: “Julle praat net.” (“It’s all talk.”)

Another South African, with a strong American accent, said he struggled to find guidelines here about how to export to South Africa. A number of people complained about a lack of contact between them and the South African government representatives locally.

Kweyama said the South African government preferred it if investors came to the country and empowered locals to produce the products. It’s about job creation rather than enriching South Africans living outside the country, it seems.

She also spoke of the department of industry setting up a one-stop-shop to help register businesses and organise work permits to make investments easy.

Kweyama eventually threw the ball back into the court of the expats, saying although there were a number of South African-US chambers of commerce across America, the New York chapter was quiet. Another official claimed the New York South Africans wanted “everything to land in their inbox”.

One guess could be that they’re too busy making money to have too much time and effort to spare for brand diplomacy. That’s where efficient and inspiring government officials and diplomats could come in handy. DM