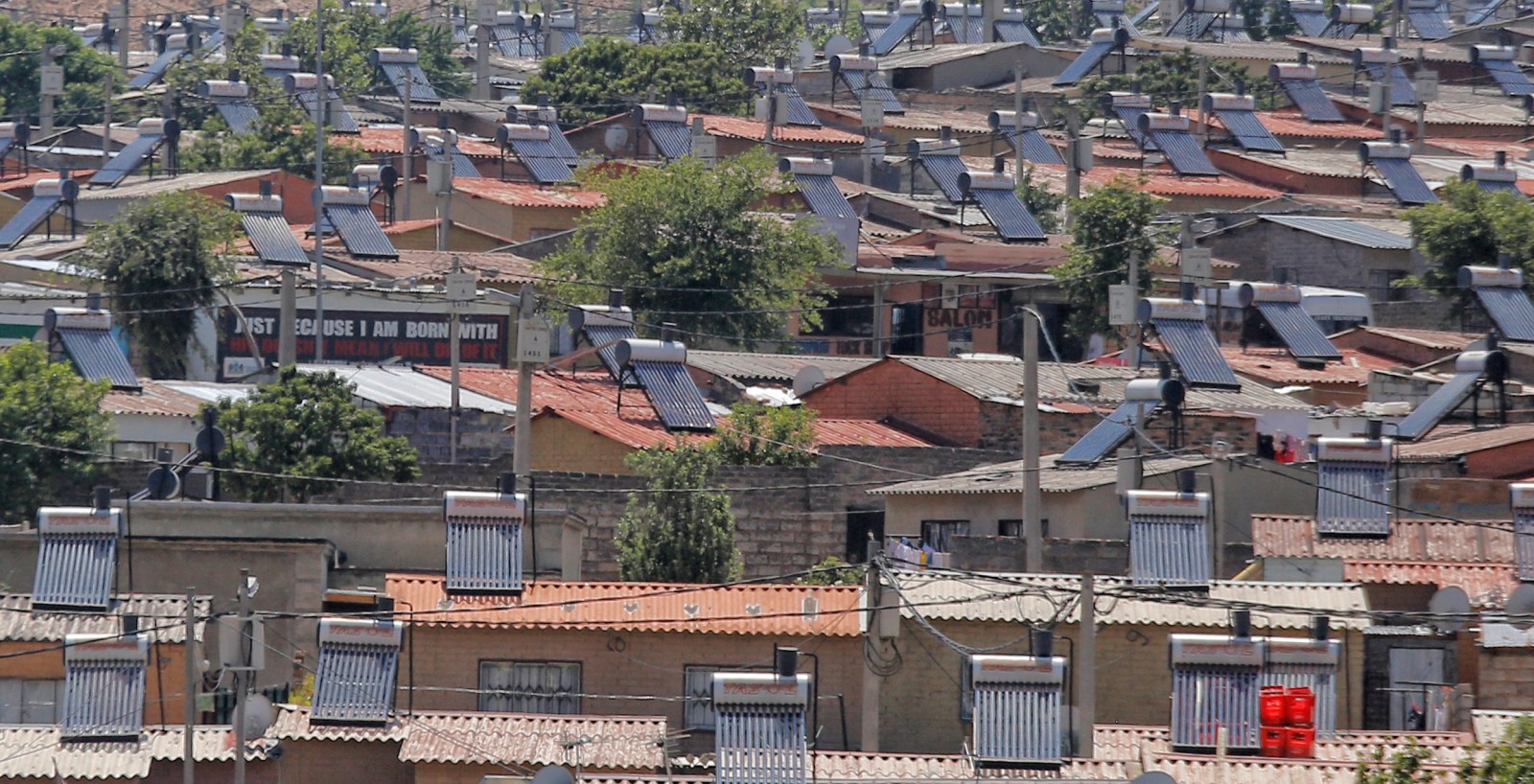 File photo: Solar power panels are seen on the top of the roofs of RDP (Reconstruction and Development Programme) houses in the Alexandra Township in Johannesburg, South Africa, 28 November 2016. EPA/KIM LUDBROOK

South Africa has a history of denying property rights, especially to the poor and vulnerable. The natural relationship – intricately related to dignity and freedom – that develops between people and their possessions was forcefully shattered by a racist government with a socialist ideological agenda. The dawning of constitutional democracy promised to heal this broken relationship, but security of property rights has not yet been realised. Instead, it stands threatened by calls for expropriation without compensation.

Professor Ben Cousins asks in Daily Maverick (29 August 2018) how best to secure the property rights of the poor. He notes that private property is currently seen as the gold standard, but he is not convinced that this institution, secured in the form of a title deed, is the answer. Cousins believes that recognising and institutionalising protection for “social tenure” – “rights that are shared in character, not individual, and that are embedded in social relationships” – might be a better avenue to protecting the rights of the vulnerable.

Cousins is concerned with the poor, 60% of whom hold their property under social tenure. Our concern is that many of these people remain poor precisely because they are outside the formal title deed system, which is currently the only mechanism for ensuring tenure security. By facilitating the process to acquire deeds, this is something the Free Market Foundation’s Khaya Lam (My Home) Land Reform Project works tirelessly to change and with notable success.

Banks do not recognise land held under social tenure as an asset because they cannot use it as security for a loan. Ownership should mean that the people who own something can sell it, use it as security for a loan, make any alterations or improvements, and so on. Banks want to make returns on their loans. They harbour no ideological agenda against alternative systems.

Cousins argues that the formalities that go along with title deeds are prohibitive and exclusionary for the poor. We have no reason to dispute this, for, in any area of economic activity that the state gets involved in, unnecessary complexity usually follows.

The community of Marathon and Delport in Germiston, for instance, has been agitating to have their shanty town formalised so that they can finally go about becoming a suburb. But it has been unable to do so, since it would need the Surveyor General to conduct a land survey and formulate a general plan. After that, they need to go through a complex, expensive, and time-consuming process of registering as a formal township. This process is impossible for a poor community to attempt without the institutional backing of a professional property developer with its own legal department.

Is it that government’s failure to extend the title deed system to RDP beneficiaries is a symptom of the bureaucracy disease that runs through any unconstrained government that is too large? Or is it a failure of the title system per se; which is used mostly by the middle class, many of whom were formerly living under the informal systems and many of whom used to be poor? It is also on record that government gives faux title deeds to beneficiaries of RDP homes, which include so-called “pre-emptive” clauses that prohibit the new “owners” from selling or sub-letting their property.

The process of procuring and maintaining one’s title deed is expensive but is currently the only concrete way of ensuring property rights are enforceable against those who wish to undermine them. Where there is much talk about changing the Constitution, and possibly losing property rights in the process, bona fide title deeds are both a way of attempting to help people unlock capital to use for themselves, and to fight against the continual attacks on our rights.

The Khaya Lam Project is less concerned with title deeds per se than it is with actual security of property rights. This ensures that what is yours is yours, and will remain yours, unless you decide to abandon or alienate it. This applies to individuals, families, or whole communities. The concept of private property should not be seen as synonymous with the idea that only a lone individual can own property, and to the extent that title deeds create this impression, there is certainly room for improvement.

Property rights underpin all other rights. Without the right to own your own property, and to do with it as you please, you remain at the whim of whoever finds themselves at the helm of the state. Group and social tenure systems are meaningless if they are not underpinned by secure private property rights.

Title deeds, indeed, are not an end in themselves. They hold no intrinsic value. But they are a mechanism by which the inherent property rights of the people are recognised and protected. They hold immense value for those who are capable of acquiring them or are lucky enough to acquire them. When one witnesses the tears and celebration at Khaya Lam title transferring ceremonies, the unadulterated joy bears witness to the worth and meaning of title deeds. Unlike under the former regime, these owners know their property will still be theirs when they wake up the next morning.

Everyone who values the right to property should see no reason to oppose Cousins’ call for a “robust alternative to titling” if, by robust, we mean a system that provides better security of property ownership than a deed.

This alternative may lie with blockchain technology and the potential it holds, in no time at all, to create foolproof private property registries and store within them the records necessary to identify owners and virtually eliminate the onerous transaction costs associated with titling. DM