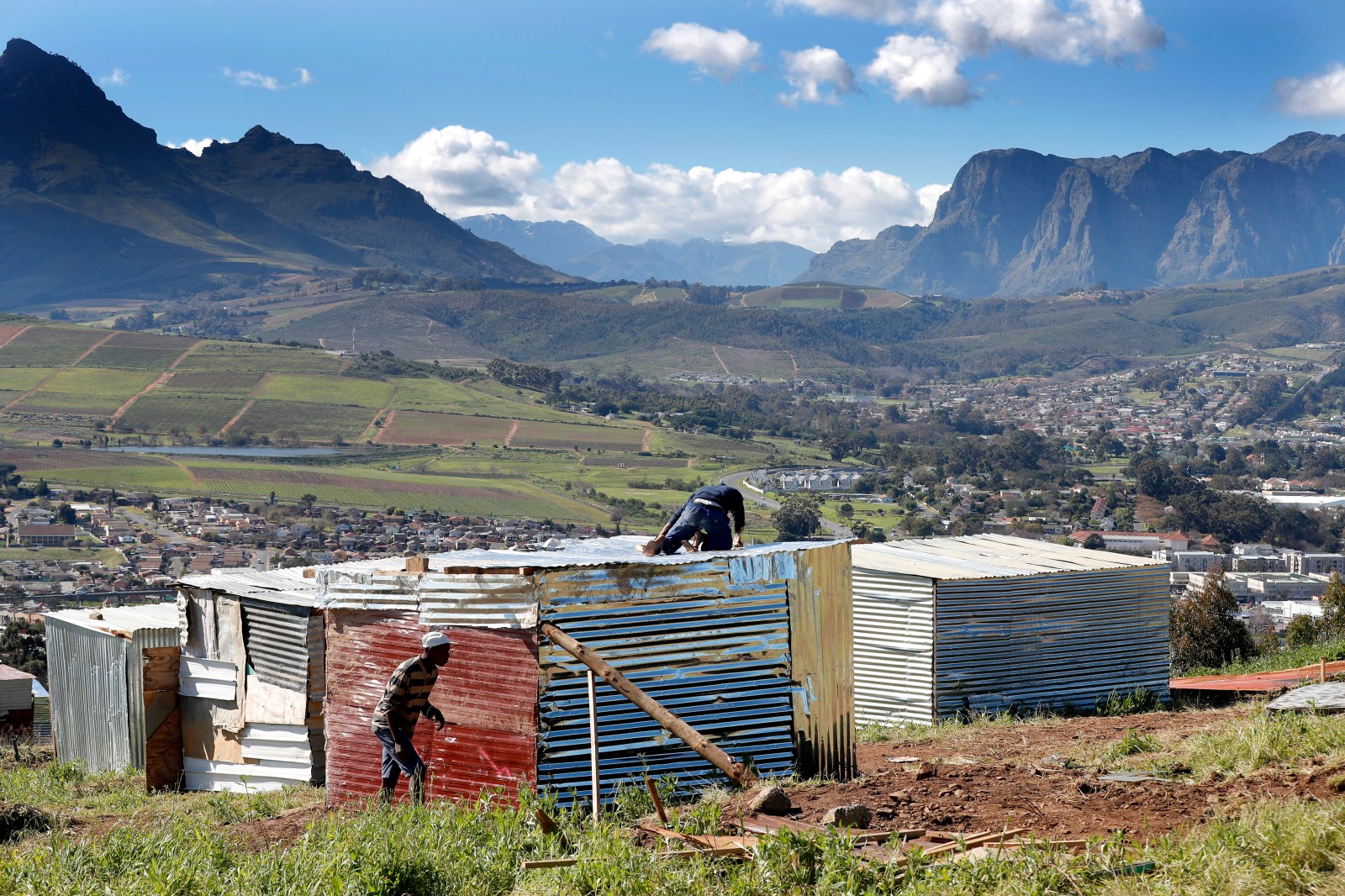 South African men build an illegally erected shack during a land invasion on the property of Louiesenhof Wine farm in the heart of the major wine producing region of Stellenbosch, South Africa, 08 August 2018. EPA-EFE/NIC BOTHMA

A major question thrown up in current debates on land is how to secure the land rights of people living in areas where systems of both land tenure and authority are informed by customary law. Similarly, people living in informal settlements, backyard shacks and abandoned buildings, often the poorest of the poor, also need to have their tenure secured.

In 2017 I estimated the numbers of South Africans living on land or in dwellings held outside of the formal property system. Drawing on reputable research, it is estimated in 2011 some 1.5 million people lived in RDP houses with inaccurate or outdated titles, in most cases due to transfers not recorded on the deeds. Another five million lived in RDP houses where no titles had yet been issued due to systemic inefficiencies.

Along with 1.9 million people living in backyard shack, two million on farms belonging to others, and 17 million in communal areas, in that year the total amounted to about 30 million people, nearly 60% of the population.

Given the vulnerability of the poor in our highly unequal society, and the highly volatile politics of land that is now erupting, questions of the security of property rights should concern us all – and not just because of the perceived threat of expropriation without compensation. There is a larger social question to be urgently addressed that should be central to efforts to reduce unsustainable levels of poverty and inequality.

The question is: how to secure the land rights of those living in poverty?

One view is that insecurity of land rights results from the lack of a registered title deed, which records the property rights of occupants of land or housing and can be defended in court. Private property is seen as the gold standard, and since we have an efficient Registry of Deeds, the remedy appears to be simple: extend the system of title deeds to all South Africans.

Most vocal in their advocacy of titling are free market enthusiasts, including the Democratic Alliance. It is easy to discount their views as ideology. But many who do see a central role for the democratic state also view title deeds as a progressive and necessary component of land policy.

Is this not the right thing to do, then? No, not at all… rather, we need robust alternatives to titling, in the form of laws and institutions that recognise, oversee and support rights that are shared in character, not individual, and that are embedded in social relationships. “Social tenures”, in short. Not for ideological reasons, but on pragmatic grounds.

Research reveals a wide range of land tenure systems in existence across rural and urban South Africa. Many are off-register, regulated by a very different logic to the market-driven processes that underpin private property. Need is more important than ability to pay. Rights are often shared and derive from accepted membership of a family, kinship group or community. Land allocation and dispute resolution are generally overseen by local institutional structures.

These features are in stark contrast to the formal system of title deeds. This is based on surveyed plots with a singular registered owner, either a person or a corporate body. These units form the basis of the national “cadastre”. The system is serviced by the Deeds Registry, by private sector surveyors and conveyancers, and by municipal officials, implementing a range of interlocking laws and regulations.

The system of title deeds functions relatively well for the private sector and portions of the middle class. For those in secure working class jobs, it can facilitate increases in the value of their housing asset over time.

But it is highly exclusionary for the poor and unemployed. This is partly a matter of costs that the poor cannot afford to pay, and partly because individualised rights undercut and undermine systems of shared rights. Social tenures underpin mutual aid in ways that individual property systems tend to destroy.

Another key problem for people with off-register tenures is discrimination at the hands of the state and the private sector. Banks do not recognise their land as an asset. Another is their vulnerability to eviction. Despite some protection under post-apartheid laws, such as the Interim Protection of Informal Land Rights Act of 1996, people living in social tenures have to go to court to have their rights legally enforced, but most cannot afford to do so.

Development and land use planning, public investment and service delivery in areas under off-register systems are highly constrained. Lack of recognition and oversight mean that elite capture by unaccountable leaders often takes place, as in communal areas where minerals are found and chiefs and traditional councils enter into deals with mining companies. Women, increasingly the de facto heads of most households, tend to be more vulnerable than men.

As illustrated by long delays in issuing title deeds to those with RDP houses, as well as its inability to produce a credible audit of land ownership in South Africa, the formal system is under severe strain. It is simply not realistic to expect government to extend the land titling system to all South Africans.

In addition, land administration in general is increasingly dysfunctional. But in any case, poor people do not want a system that will render them more vulnerable than they are already. What they want is legal recognition of shared rights and state support – and a document that some call a “a title deed”.

What of the notion that the poor can use their title deeds to borrow money from a bank, start up a small business, and thereby work themselves out of poverty? Many studies around the world have shown this unlikely proposal to be completely fallacious. In South Africa, property owners in townships have expressed their unwillingness to put their homes at risk by offering them as collateral for loans for business operations.

If titling is a bad idea, then what kind of tenure reform should we be pursuing?

One option is to adapt some elements of the formal system in order to provide a degree of official and legal recognition of rights within social tenures. Innovative practitioners have already developed a range of practices, concepts and instruments aimed at securing rights in an incremental manner. They include special land use zones, recognising occupation rights in informal settlements, and piloting the recording of rights using locally accepted forms of evidence.

These could be adopted as policy and implemented across the country. They allow people in off-register tenure systems to receive at least some of the benefits of development and service provision.

A second option involves a more fundamental overhaul of land tenure laws and land administration, leading to systematic recognition of and large-scale support for social tenures, in all their diversity. This would involve stronger laws protecting rights-holders, and an adjudication system that allows new forms of evidence in determining who holds rights. The approach would require establishing new institutions for negotiating, recording and registering rights under social tenures.

As recently recommended by the High Level Panel of Parliament, a Land Records Act is needed to formalise the recognition of social tenures as fully-fledged property rights. The new system could also include a Land Rights Protector, to help resolve disputes before they have to go to the courts.

The draft Land Rights Bill of 1999, thrown out by a new minister because it allowed people to choose whether or not they wanted traditional leaders to administer their land, would provide important pointers for legislators. Of course, as with so much else, ambitious solutions such as these will require us to rebuild the waning capacities of the South African state.

Most fundamentally, however, we need to question the assumption that the sole solution to the problem of tenure insecurity in South Africa is a massive extension of the system of title deeds. Alternative approaches are needed – and urgently. DM

Professor Ben Cousins holds a DST/NRF Research Chair in Poverty, Land and Agrarian Studies at the University of the Western Cape. Along with Donna Hornby, Rosalie Kingwill and Lauren Royston, he co-edited the book ‘Untitled. Securing land tenure in urban and rural South Africa’ (UKZN Press, 2017)