Deciding factors in 2019 elections – complex issues in a complicated situation 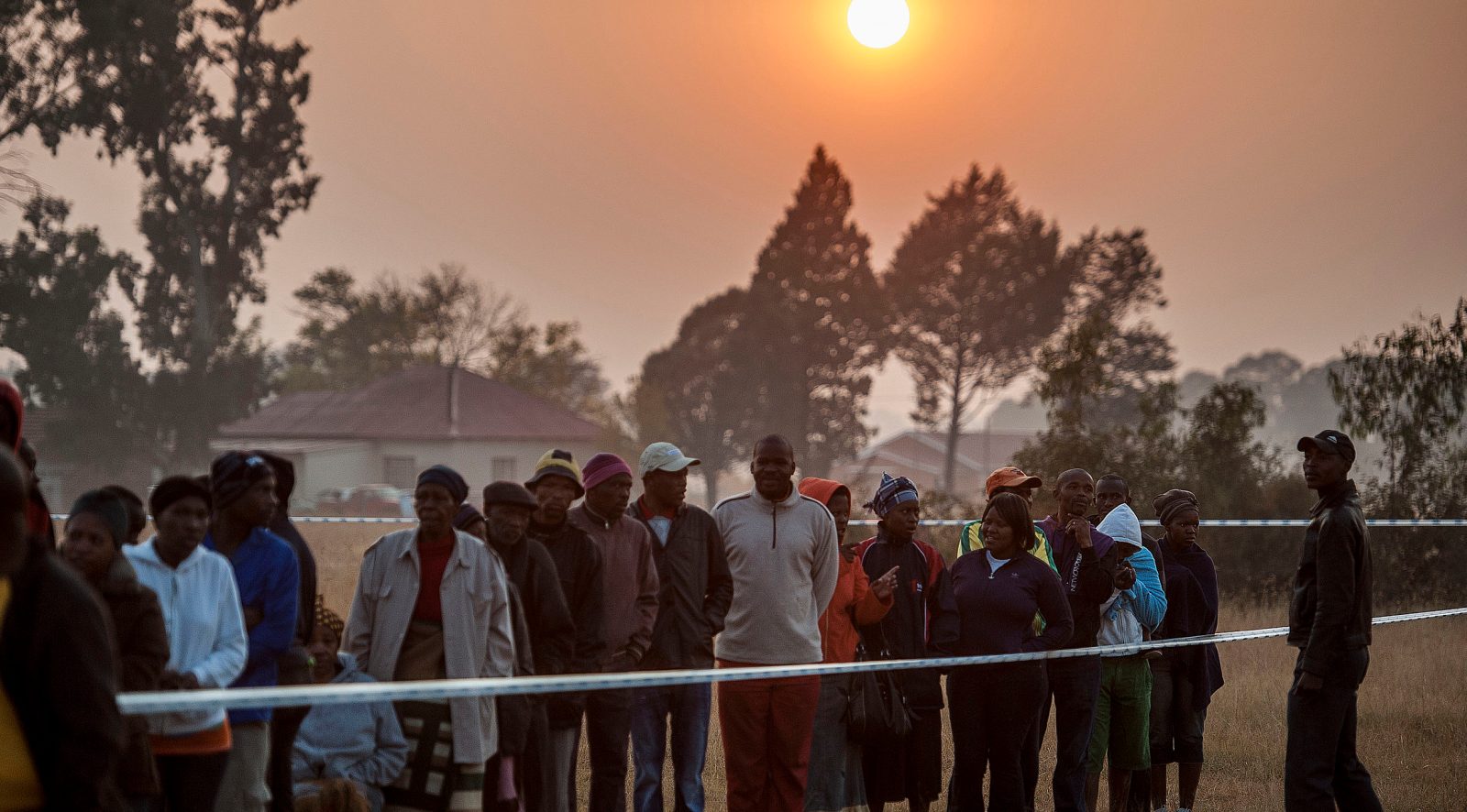 South Africans queue as they wait to cast their vote on May 7, 2014 in Mangaung, South Africa. (Photo by Gallo Images / Conrad Bornman)

It should be obvious to everyone that in our post-Nasrec dispensation, our politics is moving more quickly and even more chaotically than it has in the past. Events swirl around us and it is difficult to make any predictions. At the same time, an election is now possibly less than nine months away. That means, while predictions about margins of victory surely cannot yet be made, certain issues can be identified that could help determine what the results could be in 2019.

So much has changed in our politics since the last national elections in 2014. That time around, almost six months before the election, it was possible, through simple gut feel, to make a prediction and come pretty close. This time it would be foolish to feel certain about anything, let alone 2019 results.

This tells us much about how certain structures of our politics have almost fragmented since 2014, from Cosatu to parts of the ANC, and even, strangely, to parts of the DA. And of course the result at Nasrec, the election of President Cyril Ramaphosa, changes many of the dynamics that were important during the 2016 local elections. (At the same time, polling has probably improved since then, so the two main parties, the ANC and the DA, will probably have accurate data on which to base their predictions.)

It may well help to divide the issues into two major sections. The first are structural — in other words, how will our structure and our elections affect the final result? And the second major category would probably be around the issues that voters will concentrate on while making up their minds. Of course, both of these categories affect each other, some issues interact with the structure to change the outcome, so they cannot be placed in watertight containers.

The first major variable is probably going to be turnout. This is key for everyone, and affects different parties in different ways. In 2016, it was the lack of turnout for the ANC in Gauteng that led to the party losing control of Joburg and Tshwane, while high turnout in the suburbs helped the DA to their sort-of victory (and “sort-of control”) of these metros.

Turnout has various strands to it. It is driven by issues, by leaders, by general sentiment, the economy and even the weather on voting day. It is entirely possible that turnout in this election is relatively low, because people are unhappy with how the ANC is conducting itself, while some of the DA’s voters stay home because they can’t be bothered to vote against Ramaphosa. But the opposite can also happen, in that Ramaphosa could drive former ANC voters back to the polling booth, while DA voters feel energised for other reasons, like not allowing the ANC to leap over the two-thirds threshold.

Then there is the ANC’s problem in KwaZulu-Natal. In 1994 and 1999 the province was won by the IFP. The ANC’s share of the vote after that was driven by Jacob Zuma’s incredibly effective campaigning. Now, he is no longer quite the electoral magnet and force he once was, while the unity of the ANC in the province back then is still just a happy memory, although so far the province has at least held the line since its conference two months ago.

But the ANC surely lacks strong national leaders from KwaZulu-Natal, and so its share of the vote from this province could drop. Its control of the province looks not in doubt, but the population of the province is so large that a significant drop in support there can affect the national picture.

Then there are actual issues and ideas that could drive the result, or at least a portion, of 2019 election.

At the moment, the first would appear to be the land issue. While the temperature on this may have lowered slightly in the last two weeks, it is likely to stay warm to hot.

If the ANC is able to keep control of the claim that it is in charge of this debate, and will make fundamental changes, this could help it drive up its majority. But if it appears to be losing steam over the land debate, then Julius Malema’s Economic Freedom Fighters may well manage to gain momentum again, and give the impression of “leading” the ANC. And as has been noted in the past, this possible development would also drive up the DA’s share of the vote, simply because it could pit those with something to lose against those with everything to gain. The land issue would obviously unify the DA and its supporters, in turn possibly driving up turnout across the board for all parties.

Tied to the issue of land is, of course, the issue of identity. If Malema and his nemesis/friend Afriforum are allowed to dominate national debate for long enough, there is the risk that 2019 becomes an “identity election”which would have negative consequences.

It would almost certainly make it harder for the DA to maintain what it calls its non-racial nature, while the ANC may also be faced with some hard choices. This could leave many people in what could be called the “political middle” with no natural home (these would probably be people in urban areas where linguistic and racial identities tend to matter less than in rural areas).

They might have to make difficult choices about which of their multi-stranded identities has priority. While this issue requires much more thought, examination and analysis, at first glance it would appear to be probably bad for the DA and good for the ANC and the EFF. But there may well be a strong case against that conclusion.

Then there are other processes which are currently in motion which could have a political impact. The first of these are probably the Zondo Commission investigating State Capture and the Nugent Commission into SARS. It is likely to hear much more evidence against people deployed by the ANC to government over the next few months.

If this evidence continues to be ignored by the ANC, and people like Faith Muthambi (who government spokesperson Phumla Williams described as “wanting to steal at all costs” this week) are allowed to remain as MPs for the party, it could damage the ANC badly. But if the commissions are used as a starting point of reforming the party, and people like Muthambi are punished, such action could help the ANC.

At the same time, there are other issues related to general corruption. Is Qedani Mahlangu going to be campaigning for the ANC in Gauteng? What about Brian Hlongwa? Will Vincent Smith, who is in charge of the Parliamentary Committee examining the land issue be able to prove he did not take money from Bosasa? All of these issues could have an impact on the ANC’s showing. Particularly in an era when some of the electorate may simply feel that there is a culture of corruption that pervades all of our politics.

Case in point: at the weekend, the ANC in East London elected Phumlani Mkolo as its new regional chair. Mkolo faces corruption charges relating to the funeral of Nelson Mandela.

But perhaps more important than that will be the unity of the party. Ramaphosa is likely to try to use this campaign to unify the party as much as he is able to. This has happened in the past, where people rallied in 2009 after Polokwane, despite some of their original hostility to Zuma before his victory.

However, as the investment adverts say, past performance is no guarantee of future results. While the internal politics of the party appears muted for the moment, it could easily blow up again before next year.

It must be stressed that in an election as contested as this one, in a politics as complicated as ours, nothing can be taken for granted. It is also not certain what will happen in the individual provinces (although at least six are rock-solid ANC, while Gauteng and the Western Cape, and possibly even North West may be in play). There are plenty of other factors and issues that can and will have an impact on the polls. But, for now, the issues described here could well be deciding factors.

For the moment, predictions as to who will win are pretty easy. It’s the margin that is the problem. DM