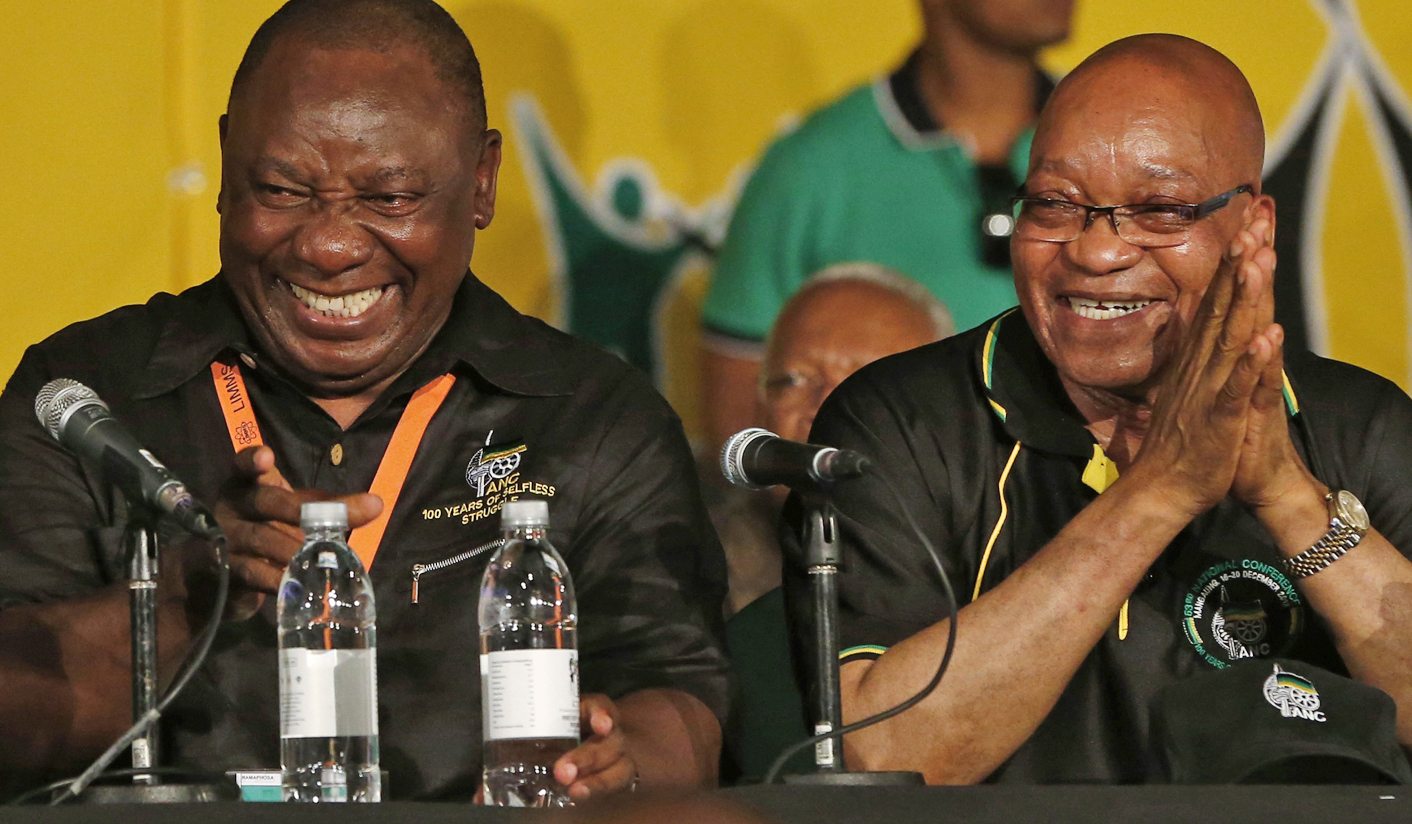 The business of political prognostication is a relatively safe one. You don't have to watch out for friendly fire in a bunker, you generally don't have to dodge physical bullets, and you don't even have to use your government SIM card to investigate the more enticing parts of the internet while in Paris. But you do have to put your brain, and thus yourself, on display. In a shooting gallery where everyone will be able to take potshots at you afterwards. I'm fairly certain I have some of those coming my way. By STEPHEN GROOTES.

(NB: Stephen Grootes has been writing nonsense about politics for years. We thought we’d finally got rid of him for a while, but he came back. Now he even has a book out – perhaps the publishers really should have spoken to me first. In this book, he predicts that the ANC will get 61% in next year’s elections. I’ve challenged him to explain himself, and he thought my request was genuine. – Ed)

There are two main questions when trying to predict an election. What are voters thinking now? And what will happen to influence their votes in April 2014 (and by April, I’m presuming the ANC realises the value of holding the elections on the 27th April)?

There are two safe predictions to make about what will happen in polling booths on that day. Someone, probably in Limpopo, will use it as a urinal. And someone else will fall asleep in one.

Other than that, we’re going on gut, feeling, and intuition. Which is why it’s so much fun to do.

Firstly, to what we do know about how people feel.

In 2011, voters gave us another indication, in the Local Government Elections. There, the DA fared much better, and the ANC not so well. But it’s hard to really extrapolate that data into the national picture. It may give a very broad indication of a trend, but possibly not more.

So then, what are the main factors that will determine how the ANC and the DA will do?

First, let’s look at why the ANC’s share of the vote will probably go down. The urban, black, middle class has grown. Listen to the talk shows. Call after call from Diepkloof, Orlando and Mabopane slams the ANC in general, and often Zuma in particular. These are people who have access to media, and its daily diet of news consisting of Nkandla, the Zuma Spy Tapes and corruption.

It’s hard to imagine that Zuma will attract more votes in our cities than he did in 2009. Then he was the change from Mbeki, now he is Zuma in his own right, and the headlines have not been kind to him for the last five years. It’s the usual problem of simply being in power: guilty or not, you represent all of the government’s problems.

The other problem facing the ANC is that the rural vote, almost all black, seems more likely than ever to simply not vote. One of the big stories next year will be the poll, the percentage of people who actually cast a ballot. It’s been going down steadily since 1994. That’s to be expected, and it’s partly because the ANC is so certain of victory that some people don’t bother to vote. But it’s also because people don’t feel that they have any viable alternatives (I could spend another thousand words writing off Julius Malema, but it’s becoming a little boring).

The ANC’s other real problem is that its “Liberation dividend” is not as strong as it once was. The ANC is no longer really the party of liberation, but of government. And that makes it difficult for it to rest on its laurels as it used to.

And then there’s Cosatu. As it heads towards those rocks that seem somewhere in the lazy distance, it’s not going to be able to organise and campaign for the ANC as it once did. This could be crucial in some urban areas, where, in the past, unions have provided much of the campaigning machinery. They’ve also provided leaders who are able to campaign for the ANC, while not being the ANC, which has bought them legitimacy in places where the local ANC has failed.

Now, let’s look at what is in the ANC’s favour and why the vote won’t drop past the 60% mark.

Firstly, it is still the ANC. For many, many people, it is not so much a political party, as it is a part of their identity. It is about a sense of worth, life’s mission, of being part a greater community. For years, they lived their freedom through voting for the ANC. That cannot be written off easily.

Then we have the other thing the ANC can do which no one else can. It can mobilise literally through the entire country. It is almost omnipresent. Every single ward, every town, every community, every village, has an ANC branch. I say ‘almost” because the one area it probably won’t be this time around is Marikana. But that’s still a smallish area, which likely won’t have a huge bearing on the national picture. These structures bring organisation, and the ability to actually campaign. Crucially, it also brings the ability to get out the vote. If the ANC’s biggest problem is just getting people to the voting booth, this huge network is the best solution.

The ANC also has money and resources, and personnel. It will be able to move its people around, and actually run a fully professional campaign. It’s already started: the ANC leaders are going around the country on a “manifesto campaign”. Communities will, even for a tiniest of moments, feel they are heard and appreciated by the leaders from Luthuli House. It’s very effective campaigning, and the ANC will reap the rewards of the work it’s putting in now.

In 2009 the party let slip that it spent around R200 million on its campaign. Expect that to be dramatically increased in 2014. And in all politics, money matters.

Much is often made of the new generation of voters, the “born-frees”, of how they will all be voting, and how this will change things. Well, no actually, it won’t. Evidence here and in pretty much every democracy around the world shows that young people don’t really vote. They do later in life, but not just yet. Of course some of them will, but it will be just a small factor in the overall outcome.

And then we have government. Mark my words, very soon, every single department, and every single province is going to launch its own way of celebrating twenty years of freedom. It will all be government money going to the seemingly innocent project of celebrating our country’s liberation from Apartheid. But it will also be less-than-subliminal advertising for the ANC. There is no way around this for the DA. Imagine how it will look if the Western Cape Provincial Government is the only one in the country not to celebrate twenty years of freedom. And how that will be used against the DA.

Then we have to look at the DA. I predict a figure of around 24% for the main opposition. This is actually quite a generous on the one hand, because that’s growth of around nine percent. It also means that one quarter of voters are voting for a party that does not necessarily yet fully reflect the identity of 80% of voters.

The party is working furiously hard, and pretty effectively in some areas. And it will do very well in places like Gauteng and Northern Cape, apart from Western Cape, where is all but assured of victory. But we have to remember where the bulk of our voters live. It’s KZN, Limpopo and the North West, all ANC’s fortresses. While Gauteng is now the biggest province by population, those provinces will really have a much bigger impact.

So then, with all of that, how does one get to 61% for the ANC? There is no precise calculation one can really make. It’s really about how quickly you think the country is changing. Everyone will have a different view. I’ve based mine on what I think is the safe assumption that the ANC will lose votes come next year, but I don’t think the country has changed fundamentally. That means the change has to be within single digits; we’re not at the stage where the country has changed by 10% just yet. Crucially here, we don’t yet have a fully legitimate “black” opposition that would push that change. The DA is getting there, more quickly than many may think, but it’s not quite there yet.

Then we have to look at the other parties. While much is made of the Economic Freedom Fighters, they don’t have the structure they need to make a big dent. If Julius Malema isn’t there, the meeting doesn’t happen. Agang is also battling to get a proper structure going. Both these groups have the same problem; name two of their members other than their leaders. But their leaders do both have pull, which means they will get something. Hence they both get three percent.

Otherwise the process of the smaller parties simply disappearing will continue. This means people like the FF+, the UDM and the ACDP will lose further shares of the vote. So will the IFP, but perhaps more dramatically than the other small parties.

It’s only when you start to put the whole picture together, that you start to get an accurate picture. In other words, part of calculating what the ANC might get, is predicated on what you think the FF+ will get and so on.

It’s important to stress this. There is no real way of knowing what will happen, just as there is no way of knowing what would happen if we all voted tomorrow. There are high levels of thumb-suckery involved. But so often before we have had predictions of the demise of the ANC, claims of how in this election things are going to change. Our country isn’t like that. It changes, and sometimes it changes fast.

The question really is, how quickly will the ANC change with it. DM

Editor’s Note: Grootes’ book, SA Politics Unspun is being launched on Tuesday. It’s currently available in all good bookshops. And in some unshady parts of the internet. Grootes is the Senior Political Reporter for Eyewitness News, and the host of the Midday Report on Talk Radio 702 and 567 Cape Talk. We can’t quite believe he’s got away with this sort of thing for so long.