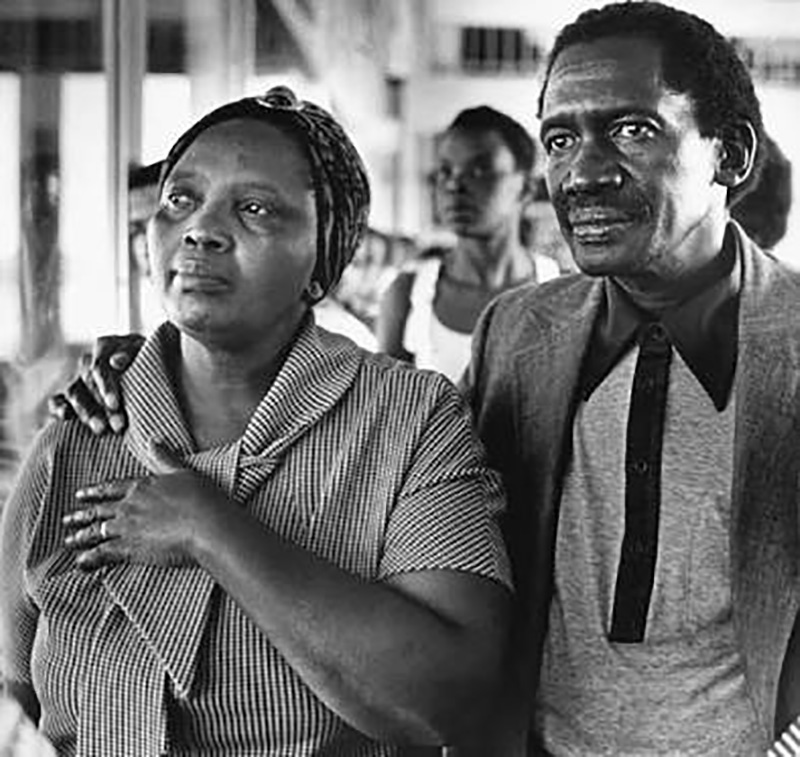 Zondeni Veronica Sobukwe, whose place in post-1994 democratic South Africa has been seemingly neglected, died early on Wednesday morning. She was 91 years old. Her death comes after three weeks of hospitalisation at the Midland Hospital in Graaff-Reinet, Eastern Cape.

“We received the tragic news in the morning around 2am about the sad passing of the Mother of Azania, a very humble, resistant and loving woman we came to know many decades ago,” said Kenneth Mokgatlhe, spokesperson of Narius Moloto, one of the presidents in PAC whose leadership is being challenged.

She had her first experiences of and direct confrontations with racism, the apartheid state and police at an early age “consistently challenging ruthless authorities and calling for justice on numerous occasions throughout her life”.

In her youth she participated and led protest marches against racist conditions imposed on trainee black nurses at Victoria hospital in Alice. It was through this activism, that she met Robert Mangaliso Sobukwe, the then Students’ Representative Council (SRC) President at the University of Fort Hare. The two married and had four children, Miliswa‚ Dinilesizwe‚ Dalindyebo and Dedanizizwe, together.

“Following the Sharpeville Uprising on 21 March 1960, Mama Sobukwe fiercely challenged the regime on the unjust conditions surrounding Robert Sobukwe’s incarceration under the draconian Sobukwe Clause, remained a backbone for her family and sacrificed her life for freedom and the vision of a liberated Azania (SA),” the trust’s statement read.

Earlier this year, she was awarded the Order of Luthuli in Silver, by President Cyril Ramaphosa, at the Sefako Makgatho Presidential Guest House in Pretoria.

At the time, Dr Cassius Lubisi, the chancellor of the national orders and director-general in the Presidency, described her “tenacious call for freedom of the people, (and) service to the community and steadfast support of incarcerated freedom fighters”.

On Wednesday the office of the Presidency released a statement extending their condolences to the Sobukwe family, said Sobukwe was a “struggle stalwart in her own right” who, in her long and tumultuous life “endured pain, rejection and immense suffering”.

“We have lost a heroine of resistance and a fighter for the freedom of all South Africans, who continued her activism into our democratic dispensation. We will always remember and honour her extraordinary contribution,” said Ramaphosa in a statement.

For many people, Sobukwe represented a group of liberation stalwarts that are seen to have been erased from the history and consciousness of the nation, especially those of the Pan-African lineage.

“Although largely unknown, silenced and erased from public memory and national consciousness, she dedicated most of her adult life to the cause of the Azanian people and, for this, was known far and wide as the ‘Mother of Azania’,” said Thando Sipuye, co-ordinator of the Robert Mangaliso Sobukwe Trust.

For Sipuye, Sobukwe was a defiant and fearless icon of the struggle against racism and white supremacy in South Africa, as she fought valiantly against the apartheid state and “epitomised the dictum of the Pan-Africanist Congress, which is: To serve, suffer and sacrifice”.

Sobukwe testified at the Truth and Reconciliation Commission (TRC) on 12 May 1997 about her husband’s death saying: “Nothing came to my surprise or shock, because from the day I met him he was in the struggle and he died in the struggle. Everything was to be expected. I was not too aggrieved, in the sense that I expected this to happen,” she said at the time.

Funeral and memorial details are still being finalised. DM