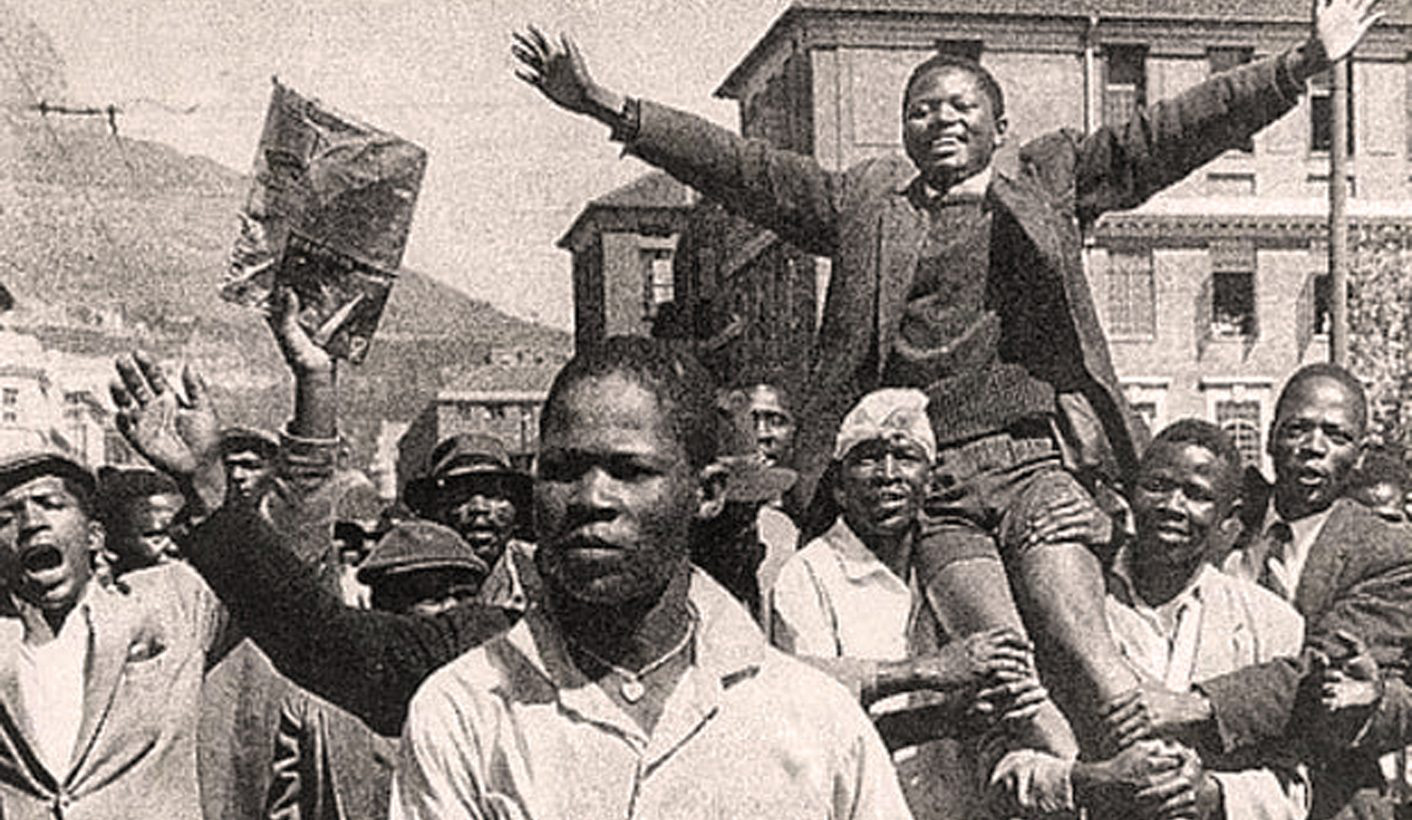 The PAC in its heyday: The young regional secretary of the PAC, Philip Kgosana, is lifted up at a march of 30,000 people on Parliament in protest against the pass laws, 30 March 1960.

As the 2019 elections draw closer, the Pan Africanist Congress is battling to unite and redefine itself amid ongoing court tiffs and infighting. In the latest move, a court bid to block a member-initiated unity conference from going ahead under the banner of the PAC failed.

The President of the PAC, Narius Moloto, brought an application before the South Gauteng High Court to interdict a unity conference planned for the long weekend of 9 to 12 August, organised by a National Unity Working Committee and expelled members of the party.

Moloto, who was appointed president in December 2017, issued the legal challenge to Letlapa Mphahlele, Alton Mphethi and Luthando Mbinda, who all claim to be the legitimate president of the PAC, in a bid to thwart a unity conference planned in Kimberley.

“Today what we are here to do is to prevent them to use the logo and regalia of the PAC in the ynity conference,” said Moloto, speaking to Daily Maverick outside the court on Wednesday.

The group of people, which includes expelled former presidents and current members of the party, formed a National Unity Working Committee and wanted all members to join them in the unification of the party, which has a proud liberation history.

Although Judge Denise Fisher dismissed the urgent application on the grounds that the urgency of the matter is “self-manufactured”, Moloto believes it does not overrule the merit of the case, that the unity conference is not a legitimate and sanctioned gathering of the PAC.

Since the rise of the Pan Africanist Student Movement of Azania (PASMA) within universities and the resurgence of the land debate in contemporary South African politics, the PAC has renewed its long struggle for a clear directive in a post-1994 era amid a crippling leadership crisis.

But PAC spokesperson Kenneth Mokgatlhe says this is an event organised by disgruntled members who are seeking to divide a party that is already united under the leadership of Moloto ahead of the 2019 elections.

“We cannot allow these people to continually and perpetually use the name of the PAC,” said Mokgatlhe.

The protracted infighting within the PAC has produced what are seen as four factional groups who all claim to have their own “legitimate” president.

In 2012, Letlapa Mphahlela was elected as the president of the PAC, but he was subsequently expelled in May 2013, for failing to account for parliamentary and IEC funds.

Mphahlela, backed by his breakaway group, still considers himself as the rightful heir to what seems like an iron throne nobody can keep.

Soon after that, Alton Mphethi became acting president from August 2013 until Luthando Mbinda was elected president in August 2014.

However, Mphethi was expelled for not disclosing a murder charge he was implicated in. He too still considers himself as the president of the party.

When the PAC won one seat to the national assembly in 2015, Mbinda became a parliamentarian and has since held the seat despite his subsequent expulsion from the party in June 2017 for harassing the party treasurer regarding the use of party funds.

Khaya Sicama, a PAC member and part of the National Unity Working Committee, considers this to be a political matter that should be resolved within the party rather than having been dragged to the courts.

Sicama claims that the people behind the conference in the Unity Facilitating Committee are not Mphahlele, Mphathi, Mbinda or any of the expelled former members.

“If at all there are issues that need to be resolved, here is the conference. Let any member of the PAC go to the conference and articulate whatever position that he wants and advance whatever argument there, not like this in the courts,” said Sicama.

Advocate Warren Pye argued for the applicant, Narius Moloto, that the conference would be a misrepresentation to voters and members of the party that this Unity Conference is sanctioned by the PAC.

Moloto also attempted to block the use of the logo and banner of the PAC.

“The voters need clarity and we need the judge to make an order so that lay people may understand who is speaking with authority on behalf of the party and who is not,” said Pye.

Gwe Jonyikhaya, representing Letlapa Mphahlele, argued that since the conference was beginning on Friday, the applicant’s case has a “self-manufactured’ urgency that did not exist, since they had known about the conference since June, 2018.

Furthermore, Jonyikhaya argued that the lack of clarity in the leadership crisis of the party seemed to point to a need for such a conference, that had been called by the members.

He cited a judgment by Judge TM Makgoka of the Pretoria High Court, where the “Mbinda faction” were seeking to be recognised as the legitimate party representatives in 2016 for the local government elections.

“Although Judge Makgoka ruled in Mbinda’s favour at that time, he conceded that it should not be understood to mean that he is the legitimate leader but rather for all intents and purposes for the IEC administration during local election,” said Jonyikhaya.

Romano Lottering, branch chairperson of ward 53 in Ekurhuleni, fully supports the unity conference and believes that no court should pronounce on the leadership of the PAC as has been the case when leaders disagree on the succession.

And although Moloto was invited to the unity conference, Lottering said his intention was to derail the party. “What Moloto is doing is to sideline people who disagree with him,” said Lottering, “he has been held hostage by the ANC.”

With the 2019 elections looming, Moloto believes the expelled members and those behind the conference want to dissolve the party. Furthermore, although they have challenged their expulsions for over four years they have continuously lost both in court and during the party’s disciplinary processes.

Moloto acknowledges that the PAC cannot stop the conference from convening or prevent its members from attending, but disputes that it will be a legitimate PAC event. “We are saying let these people meet and do whatever what they are doing, but not in the name of the PAC,” said Moloto.

On Thursday, supporters of the unity conference began travelling to Kimberley. Proceedings are due to begin on Friday. DM