A stop-start bus trip from Joburg to Harare, where not all will be voting 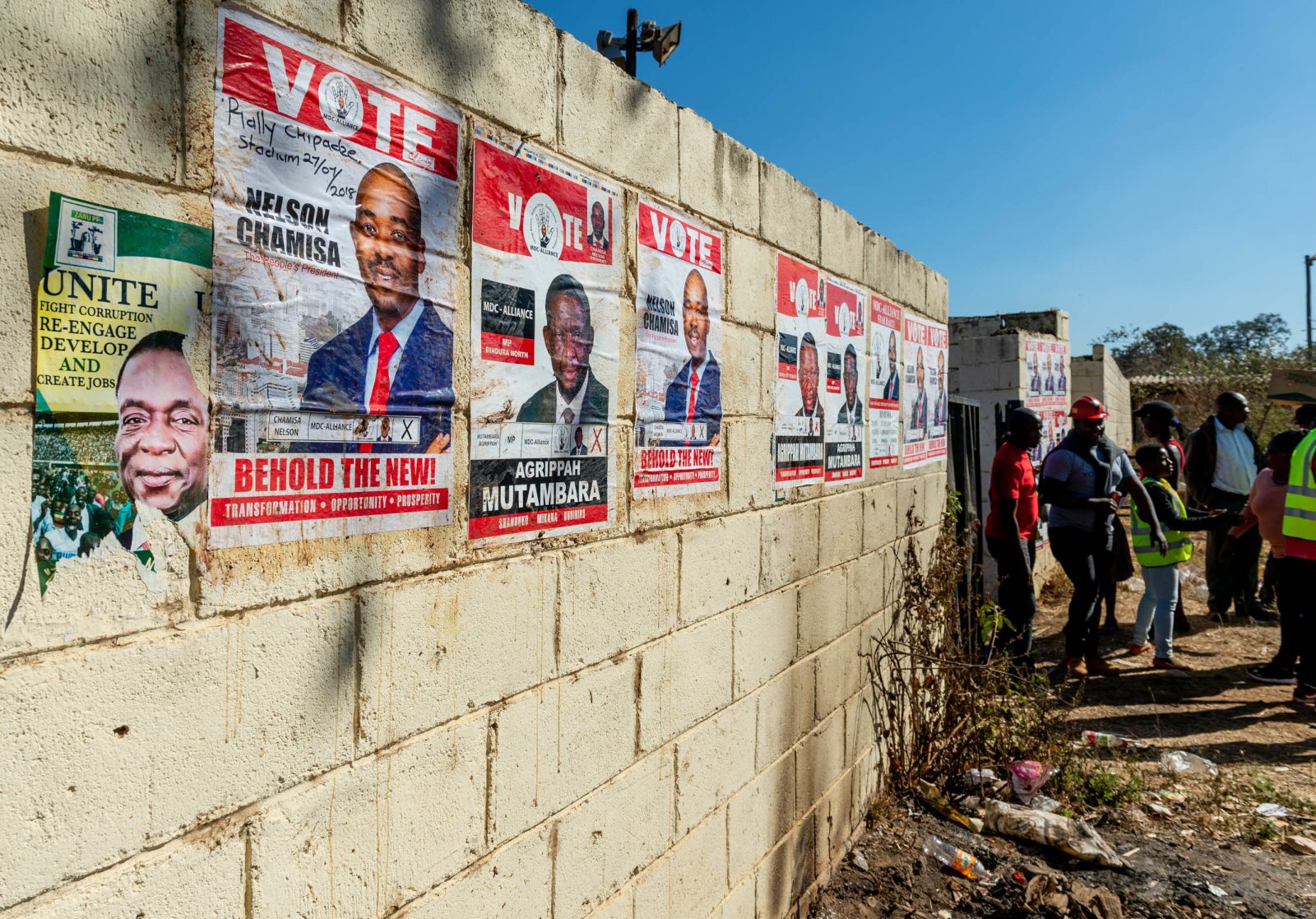 A torn ZANU-PF poster alongside The Movement for Democratic Change (MDC) posters outside a MDC rally in Bindura, Zimbabwe, 27 July 2018. EPA-EFE/YESHIEL PANCHIA

Thousands of Zimbabweans living in South Africa have crossed the border in the past few days ahead of the country’s elections on Monday, but not all will be voting.

It’s 20:00 at Johannesburg’s Park Station and, according to the ticket, the bus to Harare was supposed to be departing. A tip-demanding porter ushered me to a line of people queuing for what appeared to be both the Harare departure and the 20:30 Bulawayo departure. Many were queueing at the Greyhound desk and scales at boarding Gate 7 in what appeared to be good faith, but less frequent travellers were needlessly beginning to worry about being left behind.

This was Thursday night, four days before Zimbabwe’s most interesting election in 38 years. Its former 94-year-old president Robert Mugabe would not be on the ballot paper, campaigning has been a lot more open, and both Zanu-PF and the MDC Alliance are calling for change. Yet there’s no sign of party regalia or T-shirts among the travellers except for a jacket with a small Zimbabwean flag on the sleeve. (A colleague who travelled by plane, however, reported spotting a man in a Zanu-PF T-shirt in the front row in business class, so maybe party regalia is reserved for flyers.)

A pensioner queueing for Bulawayo said she was going to visit relatives, but she might give voting a try.

Zimbabweans who haven’t lived in their constituency for 12 months are automatically deregistered, which meant those wanting to vote in these elections had to have travelled to Zimbabwe months ago to register. This meant a certain amount of planning and at least some kind of cash flow.

The passport registration list for the bus revealed there were only about two or three South Africans travelling north, the rest being Zimbabwean.

We departed about 30 minutes late, and after stops in Midrand and Pretoria, which filled all the seats in the double-decker, and two snack/toilet stops along the way, arrived at the Beitbridge border post just before 5 the next morning.

Although the Department of Home Affairs put on an extra 37 staff members for a week or two to cope with an expected outflow of voters, there was no evidence of the temporary buildings used previously during Christmas rush times. The passport queues were no longer than expected, and by 06:00 the passengers were queueing on the Zimbabwean immigration side with a riot of birds chirping in a tree nearby as the cool morning sky turned light.

Black market money changers with thick packs of cracking new $2 and $5 bond notes, as well as some R100 and R200 notes, were doing trade among the queues. One of the passengers (he wasn’t travelling for the elections) complained that the R10 it cost for a bond dollar was too much, but given that a US dollar goes for about R14 and that a cheese sandwich and chips at Steers cost $2.50 regardless of which dollar you used, it seemed like a bargain.

Some were also selling SIM cards, but a student (she was travelling to visit her parents, not for the elections) who warned me about street kids stealing Brazilian wigs off people’s heads in Harare, said these were duds. She’d bought three before, at $3 a go. A waste, much like buying the junk food in Zimbabwe, she said. In South Africa, KFC’s cheaper, their buckets are fuller, and their chickens are fatter, she argued. We’re yet to independently verify this.

At the customs post there was a massive delay. Everyone got back on the bus and most went back to sleep. An hour or two later, the bus hadn’t moved, and neither had a load of at least 100 plastic buckets that had been unpacked ahead.

Still, we waited. Next to the bus in the parking lot for cars, a guy in a black Porsche Cayenne pulled up and parked next to a clamped, dusty, and apparently abandoned black Toyota Fortuner. The student said her brother once waited two days to cross the border with a load of goods, but this car was empty. A few metres on, however, an overloaded red bakkie also sported a wheel clamp, but this car was devoid of dust.

Passengers all blamed what was an unusual delay on the elections, but few came up with explanations. One of the theories was that allegedly corrupt customs officials were afraid that a change in government would force a change in their wicked ways, so they were on a go-slow to frustrate possible opposition voters from travelling. Or perhaps the customs officials just didn’t feel like getting up that morning.

eNCA’s Khayalihle Khumalo reported on Saturday that 12,000 people per day had been crossing, which is actually below the usual 15,000 cited by Sanral, and far below the 25,000 a day exodus during busy Christmas times. It seems unlikely that most of the estimated million or so Zimbabweans in South Africa will make it to the polls.

Mnangagwa said he was in favour of Zimbabweans in the diaspora voting, but the Constitutional Court ruled that expenses and logistics didn’t allow. This has upset some activists, who say this violated the rights of Zimbabwean expats because some refugees who experienced torture under the Zanu-PF regime were still too afraid or unable to return.

Just after 10 am the bus suddenly moved and parked in one of the customs bays, and the luggage trailer was emptied. A few pieces of luggage were randomly searched.

Ken,a passenger who equated his vote with his “side-chick” (it’s his secret), timed the exercise and declared it took only 30 minutes – a lot faster than he expected. Perhaps he was implying that the bus driver knew how to sweet-talk the customs officials.

He was travelling with two buddies to vote. They were going to make a road trip of it, but the car broke down and the flight tickets – at R2,500 one way – were beyond their immediate budgets. The bus is five times cheaper and perhaps more of an adventure too.

Another passenger, who was travelling to vote for the MDC Alliance, claimed bus drivers had ways and means of sweetening customs officials through the money they make from unofficial courier services of goods and people with document difficulties.

“I overheard some of the drivers talking about this,” he said.

In Masvingo, one of the passengers getting off was a pensioner returning from a visit to her electrician daughter in Pretoria. When asked if she was going to vote, she said yes, but coyly added that it was her secret who she would support.

Many other Zimbabweans travelled for reasons other than the elections.

Some were travelling for Saturday weddings and planned to be back at work on Monday.

“I just got this new job and couldn’t take more time off,” a 20-something woman working in finance in Johannesburg said.

“If I felt like my vote could make a difference, maybe it would have been worth it. But I don’t think it will change anything.”

Customs delays aside, there was also a narrow brush with disaster. Just outside the small town of Chivhu, about two hours from Harare, and just before sunset, a small Hyundai in a hurry rolled into the dusty bushveld on the opposite side trying to overtake the bus on the narrow and bumpy two-lane A4 highway, which has no tarred shoulder.

The driver and his passenger – who was overheard calling her husband on the phone – were remarkably and mercifully unscathed.

Loud, lewd speculation about the affair followed a previously interrupted discussion about African politics among passengers on the upper deck, prompting a man to stand up to intervene with a public prayer. “It’s never too late to have a happy childhood”, he said, perhaps referring to a remark by another passenger that the accident was because nobody prayed at departure. He thanked God for divine intervention and asked to be guided by angels.

The accident couple was taken onboard and the bus stopped at a police station a few kilometres further for an affidavit. Thankfully, it was dark by that time and there was no turning back to the accident scene.

Before November’s coup by the army there would have been numerous police roadblocks to report to, but now the blue uniforms are lying low – a plus, perhaps, for people in private vehicles frequently “fined” for traffic transgressions nobody previously knew existed.

The bus trip took 25 hours. It was supposed to arrive at lunchtime, but instead, on arrival at 21:00, the passengers were treated to a spectacular sighting of the blood moon at the slightly run-down bus station on the corner of Fifth Street and Robert Mugabe Road.

Believers might have read this much-delayed bus trip as prophetic of the road Zimbabwe still has to travel to prosperity. DM