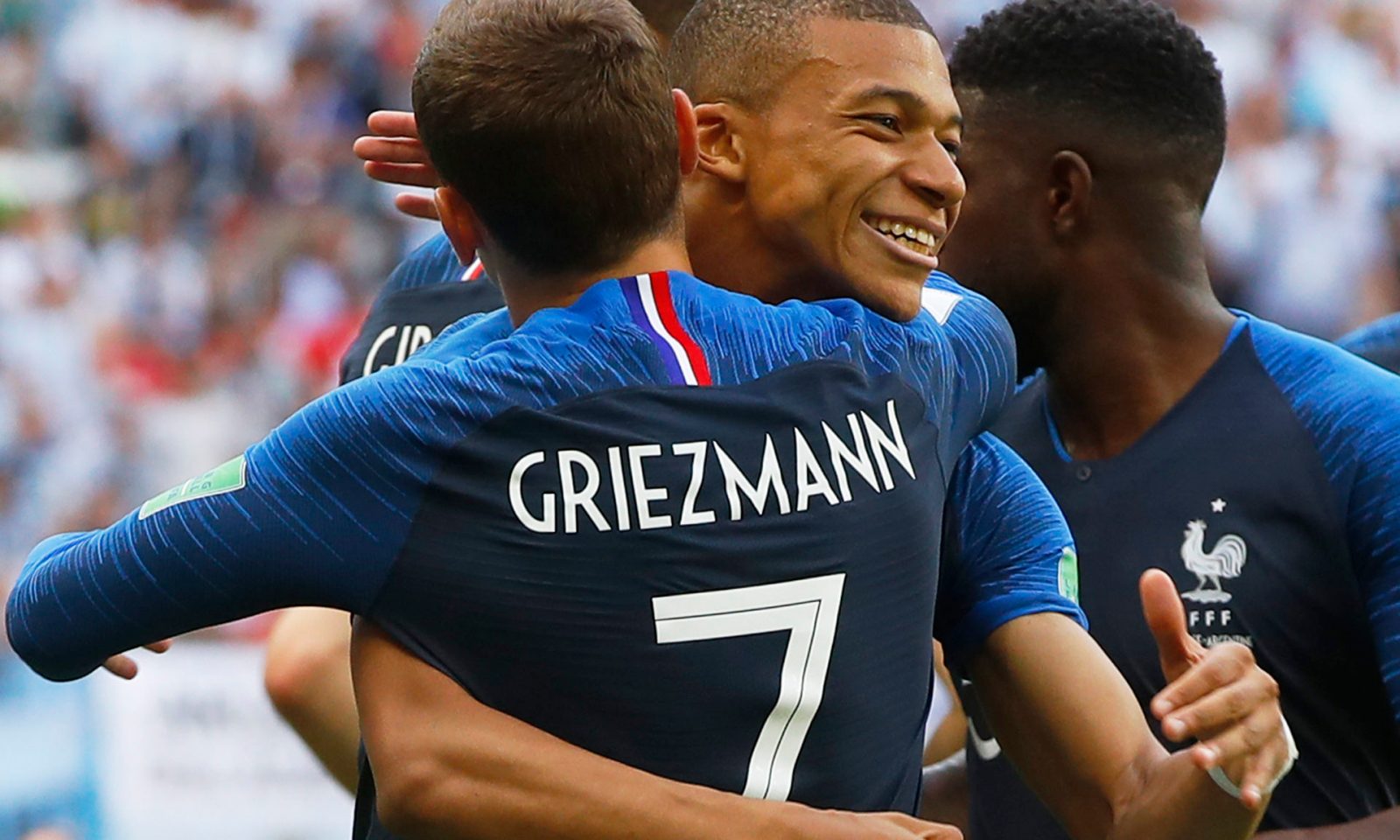 Antoine Griezmann (L) of France celebrates with team mate Kylian Mbappe after scoring the 1-0 lead from the penalty spot during the FIFA World Cup 2018 round of 16 soccer match between France and Argentina in Kazan, Russia, 30 June 2018. EPA-EFE/DIEGO AZUBEL

Like their 1998 counterparts, the French squad at the 2018 World Cup is representation of a diverse society. Their unity might not reflect reality across the board, but it’s a welcome reprieve.

It’s rare for sportspeople, especially those widely recognised, to openly express their political opinion. But in 2017, Zinedine Zidane spoke out against voting for Marine Le Pen’s National Front as the country’s elections loomed.

“It is the same as in 2002, that I am far away from those ideas, from the National Front, and that we have to avoid it as much as we can,” the midfield star of the ’98 campaign was quoted as saying.

Zizou was referring to the stance he took when Jean-Marie Le Pen, Marine’s father, was in the running 16 years ago.

Last year, he added: “Extremes are never good for anyone.”

It’s now been 20 years since Zidane was part of the French team that won their only global title and, while he has spent most of his time since outside of the country, he remains one of the most recognisable and influential figures in France, reaching far beyond the field of play.

It’s not just his footballing skill that set him apart. Back in 1998, when Zidane emerged as a hero of that triumphant campaign, he was hailed as a “powerful and inspiring rejection of racism in French society”.

Born to Algerian parents who immigrated to France in the 1950s, Zidane was part of a national squad referred to commonly as “Black, Blanc, Beur” — black, white and Arab — a play on the French flag’s tricolour of blue, white and red.

But not everyone held the same collective view.

Le Pen Snr would dismiss the team as not being French enough, precisely because of the team’s diversity.

Marcel Desailly, a black defender who was a key part of that squad, said in an interview with FourFourTwo that the team spoke about Le Pen’s dismissal, but the group wasn’t really bothered.

He said: “We already had some strong opinions on right-wing politics and Mr Le Pen in particular.”

A documentary released in 2016, titled Les Bleus: Une autre histoire de France, examines the rise and fall of the French football team, examining the inextricable link between the action on the pitch and the politics off it. World Cup winner Lilian Thuram asks the pertinent question:

“The World Cup victory was a defining moment for questioning what we are, as French people. The French team was composed of players of different colours and different religions; can we also accept this in our society, outside of sports?”

While those of a left-leaning persuasion want the answer to be that sport can serve as a unifier in society, the answer is not all that rosy.

Thuram has spent much of his retirement working as a UNICEF ambassador and fighting against racism because, he says, to this day, it is as prevalent as ever.

“I arrived in 1996 and left ten years later and saw many demonstrations of racism,” he says.

“And I saw and heard people making monkey noises whenever I touched the ball. What is unbelievable is that, 21 years on from that time, I still see and hear racism. It is deeply embedded in European society,” Thuram told the Independent in an interview in 2017.

Indeed, at this very World Cup, a Belgium fan appeared with his face blacked up in the stands, despite Fifa previously declaring that it would not tolerate such behaviour. Some dismissed it as simply being part of “Belgian culture” where “Zwarte Piet” makes an appearance every Christmas.

Part of the current French team dazzling at the World Cup is Antoine Griezman who, in 2017, posted a picture of himself “blacked up” as a Harlem Globetrotter. He first dismissed the criticism, saying, like those who defended the Belgium fan, that he was simply paying a tribute. He later deleted the picture and apologised.

In this context, the narratives of race, class and identity cannot be ignored.

Right-wingers have often slammed the “foreign” faces in the national side for not wanting to sing La Marseillaise, the national anthem that has lyrics which include references to “impure blood” watering the country’s fields, as if the singing of an anthem is the benchmark of whether somebody is French or not.

But the anthem is also embraced. In 2013, when France had to beat Ukraine to secure qualification for the 2014 World Cup, Mamadou Sakho, born to Senegalese parents, scored twice in a 3-0 win. Afterwards, he joined Olivier Giroud and his other team-mates in delivering a passionate rendition of La Marseillaise.

He told The Guardian afterwards: “France is made up of Arab culture, black African culture, black West Indian culture and white culture and we, a squad that reflects that multiculturalism, are all fighting in the same way and are united behind France qualifying for the World Cup.”

The theme of representation in the national side is in the spotlight again, two decades after the French won the World Cup. This squad is notably diverse, 14 players have African roots – either born to immigrant parents or, in a few cases, themselves born outside of the country.

Coach Didier Deschamps, who lifted the World Cup trophy as captain back in 1998, has had to engineer a dramatic turnaround from the horror show that played out in South Africa back in 2010.

It’s far cry from his predecessor, Laurent Blanc, who allegedly discussed putting a quota on the number of players who aren’t white representing French youth teams.

Notably, Blanc, like Deschamps, was part of that diverse squad of 1998, yet the two seem to hold vastly different outlooks. But even the coach’s journey to here has not been without issue.

In June 2016, after not being selected for the European Championships in France, striker Karim Benzema told Spanish sports publication Marca that Deschamps had “bowed to pressure from a racist part of France”.

Benzema said he did not believe the coach was racist, but sources close to the manager told French daily L’Equipe that he was deeply hurt by the comments. Benzema, despite leading the line for his club Real Madrid, is still not part of the squad and whatever relationship still exists between him and the coach is not known.

On the pitch, at the very least, he’s not been missed.

Deschamps’ Les Blues powered into the quarter-finals of the World Cup after beating Argentina 4-3 over the weekend.

Kylian Mbappe, at 19 the youngest Frenchman to score in a World Cup and the first teenager to score two in a match since Pele, put his wizardry on show against the creaking South Americans.

Mbappe, born to immigrant parents – an Algerian mother and Cameroonian father – after the 1998 triumph, comes from humble beginnings.

Born in Bondy, north of Paris, he comes from the working-class background of the so-called banlieues of France, a name loaded with the stigma of social strife and crime.

In the wake of Mbappe’s rise, many who have visited the country’s banlieues have told stories of how the communities are rallying behind those who represent them on the world stage. They are inspiring possibilities in the face of continued discrimination, all while poorer communities, as is so often the case, continue to be ignored.

That young Mbappe is, according to French media reports, donating his match fees to a charity that helps children with disabilities participate in sport because he doesn’t think he should be paid playing for his country, seems almost a footnote. Yet like a beaming rendition of La Marseille, it is the antithesis of the rhetoric Le Pen and her merry band of fascists wish to project.

Sport isn’t always a mirror of society. The diversity of the French side doesn’t really reflect the continued swath of right-wing populism sweeping across Europe, or the exclusion and mistreatment of minorities. It doesn’t reflect prevailing racism, but it does open the door to starting a conversation.

Sport has the power to foster inclusivity and the echoes of the 1998 squad, which inspired so many youngsters to take up the sport, is evidence of that. The ripple effect of the 2018 squad has already begun, however far they progress in Russia.

Mbappe and his teammates do acknowledge their roots of the mother continent, but they’ve all rejected offers to represent those countries. They’re quintessentially French. And there’s nothing people like Le Pen and her ilk can do to deny that. DM